$ 100 Million Bitcoin Sale Has Been Made

US Treasury Secretary Candidate Yellen stated in his current statement that he could be positive to improve the financial order by accepting the benefits of cryptocurrencies after his heavy criticism of the crypto world.

The city of Shenzhen in southeastern China is preparing to issue the country's digital currency for the third time as part of a pilot program to test China's central bank project among its citizens. It is announced that 3 million dollars of digital yuan will be distributed.

US President Joe Biden is evaluating academic Chris Brummer to head the Commodity Futures Trading Commission (CFTC). Brummer is known for his work on cryptocurrency regulations. The academic is also the author of the book "crypto assets".

Looking at the Delaware state registries, it seems that Grayscale has applied to establish a Chainlik fund. In addition to this Dec. 18 application, other altcoins are under the spotlight for the Grayscale Trust fund.

Guggenheim CIO Does Not Expect New Record From Bitcoin This Year

Scott Minerd, CIO of the financial services company Guggenheim Partners, which plans to invest in Bitcoin, said that Bitcoin can beat this record only in 2022, seeing $ 42,000. While Minerd announced his predictions for this year, he predicted $ 20,000 for Bitcoin.

The Most Interest In The Cryptocurrency Sector Comes From Asian Countries

According to a recent study by research firm Messari, 43% of the total assets in the cryptocurrency market belong to investors in Asian countries. The most prominent country in the research results showing that Asian countries have a volume of over 300 billion dollars was China.

According to a report published by The Wall Street Journal, Michael S. Barr, once a member of Ripple's advisory board, is expected to become President of the US Currency Supervisory Office (OCC) as US President Biden's Currency Officer.

While Bitcoin priced just behind $ 32,000 this morning, it dropped to $ 28,700 yesterday, its lowest level since January 4. Former Fed Chairman Janet Yellen stated that they have potential if they are regulated by softening the negative rhetoric she made about cryptocurrencies the previous day. In addition, we see that the sales, which had been high in the whale account ratios of BTC for the last three days, are now beginning to turn. While Grayscale has been purchasing BTC assets for two days, we can say that yesterday's BlackRock news is also quite enough to keep us on the positive side.

When we consider BTC / USD technically; The double peak that formed 10 days ago turned into a triple peak yesterday and fell below $ 32,000 and after giving an instant confirmation, the target reached $ 28,900. Oscillators, on the other hand, indicate a recovery in upward turn signals. If the daily candle closes at 32,000 and above, the "morning star" candle formation will form and give signals of upward reversal in four hours. 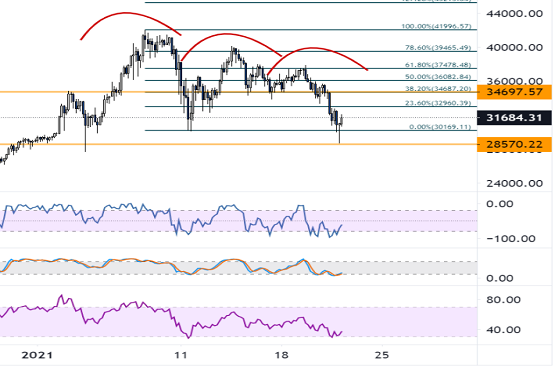 Although Ethereum has suffered sharp losses for the past two days after testing its record level of $ 1240, it still maintains a 100% rate of returns over a period of one month. While the high fee problem in the Ethereum network continues, there is no significant change in new account openings. Therefore, if the high fees in the Ethereum network do not turn into normalization steps, it may idle for a while, but let's repeat that the story and the main scenario have not changed, we maintain our medium and long-term ETH positive expectations.

When we consider ETH / USD technically, it manages to maintain the recovery bottom and top view despite the recent decline. Ethereum reached its all-time high after the big drop on January 11. Therefore, for Ethereum, where technical analysis is also on the positive side, candlesticks at $ 1180 and above could create a new upward movement. When we come back for ETH, which is the largest altcoin in market value, the more positive the monthly, weekly and annual increases are, the more positive the expectations in the long term. 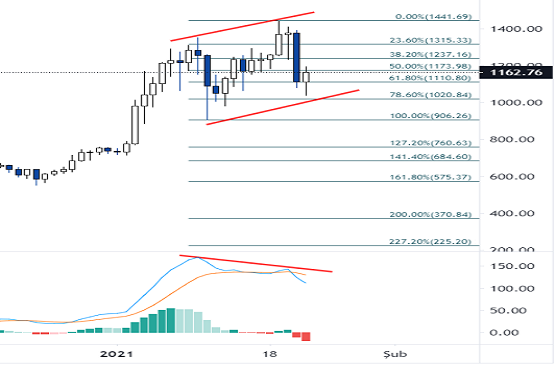 When looking at the XRP parity this morning, the most striking thing is that while Bitcoin and most of the altcoins have withdrawn, XRP has not suffered major losses. We see that Ripple has been experiencing a more separate movement from the general view of the market in recent times, when it has slowly recovered from its gold and suffered great losses. While the uncertainties regarding the SEC case preserve itself, on the other hand, we can say that XRP stands firm and maintains its positive course on the uptrend, albeit weak, compared to leading altcoins with volatility of over 100%. In terms of monthly returns, it seems to be behind altcoins with market values ​​close to itself with a 4% return rate. 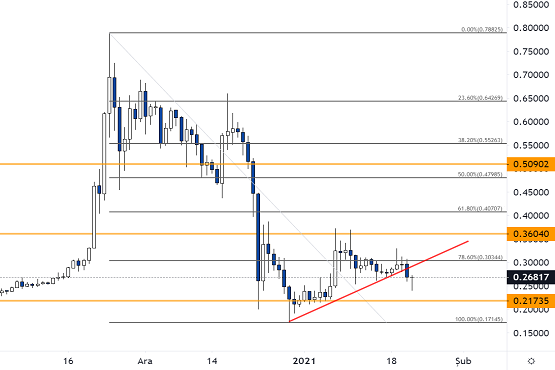 Chainlink starts the day as one of the most talked about altcoins on the last day of the week. We have said that Chainlink will be one of the most noteworthy coins, as the Bitcoin dominance is gradually decreasing and altcoins come to the fore in the race of return. Nowadays, when we receive the signals of the Altcoin season, one of our favorite crypto coins is LINK. Although it has been the champion of returns for the last two years, it is kept in cold wallets by many investors, especially by large accounts that hodl with large purchases, in line with long-term expectations. On the LINK side, the star news of the day was that Grayscale, the company with the largest crypto money fund, applied to create a LINK fund on December 18 under the name Chainlink Trust Fund. If the desired is realized, the Grayscale fund, which is subject to intense investor interest, can play a major role in the increase of LINK demand.

The LINK / USD pair is pricing around $ 19.60, up 7% in the morning hours. Although the technical analysis gives declining signals for the chart that creates an OBO (shoulder-head-shoulder) formation within the horizontal band limits of $ 19.00 - $ 23.00, the movements at the $ 20.00 level should be followed carefully in order to get confirmation. Because if the $ 20.00 level breaks down, purchases may slow down and pull pricing up to $ 16.00. However, if it does not confirm for Chainlink, which is very strong in the macro part and holds around $ 20.00, we can expect the upward trend to continue. 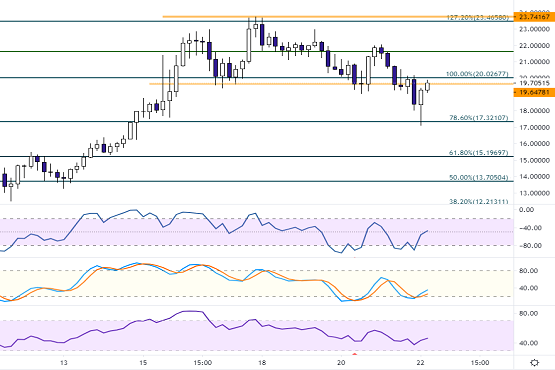