Bitcoin options worth $6 billion are expected to expire on Friday, March 26. BTC pricing may be positively affected if investors continue to buy BTC after the expiration date. If options are not exercised and the investors take profit, an opposite trend may be expected.

Ethereum's High Gas Fee Problem May Not Be Solved

According to the report prepared by CoinMetrics, even a very strong network upgrade is probably not enough to reduce transaction fees of Ethereum. Even though the amount of gas used per transaction in Ethereum increases, gas fees continue to increase due to the transaction intensity.

Datça Municipality announced that it has put the tweet it posted on Valentine's Day into NFT and put it up for sale. The municipality has already started receiving offers and the highest bid is $6,000. NFT revenues will be used for female students in need.

According to the news reported by the New York Times, US President Joe Biden is preparing a new $3 trillion spending plan. Details are expected this week for the spending plan, which will be financed by tax on wealthy US citizens and companies.

Liquidation of $1.6 Billion in One Night

In the latest letter to the SEC, Ripple had asked for detailed documentation on the classification of Ethereum and Bitcoin. The SEC's final decision was to demand the denial of this request. The SEC also stressed that the main problem is with XRP, that BTC and ETH are a false source of defense for XRP.

Reactions to the Central Bank of India Grow

Nilekani, co-founder of Infosys, reacted to the Central Bank of India's step to ban cryptocurrencies. The famous billionaire argued that cryptocurrencies should be seen as an asset class.

Twitter founder Jack Dorsey turned his first Tweet posted on Twitter into NFT and put it up for sale at the auction. $ 2.9 million received  from the sale of the NFT will be donated to charities in the African region.

Bitcoin is pricing sideways in the $53,900 zone this morning. The risk appetite lacking in global markets has also been reflected in cryptocurrencies. However, the US 10-year bond interest rate fell below 1.6%. This development can help or encourage the market to recover. Instead of selling, miners have started to accumulate BTC in their pool again. While BTC amounts in wallets have started to increase, the BTC amounts withdrawn from exchanges has also shown a significant increase. The current situation supports BTC upwards. If there is no disruptive news, we can see movements in Bitcoin with this data.

When the Bitcoin is technically analyzed, although the reactions from the 52,000 zone yesterday provided the movement up to $55,000, it could not be permanent. However, the accumulation in the red area may indicate that it is gaining strength here. Momentum and MACD confirm the reactions from the bottoms in the same situation. As a result, as long as the reactions do not fall behind the $53,200 intermediate support, increases can be seen throughout the day. The outlook is horizontal but positive. 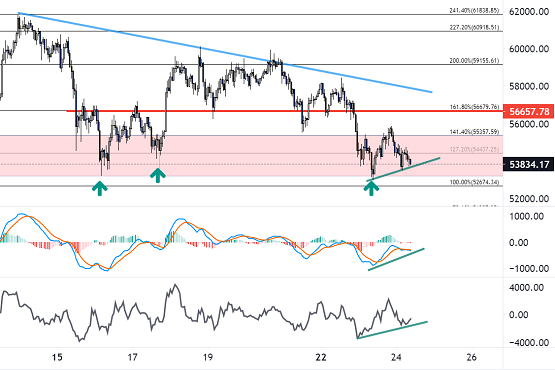 Although Ethereum prices have not changed for the last two and a half weeks, we would like to remind you that the biggest reason for this is the 51-hour protest that the miners will make to the system against the EIP - 1559 improvement on April 1. In Ethereum, which was traded at $1,660 this morning, the density and flow in the system decreased accordingly. For this reason, we can say that PoS coins called ETH Killer are more popular than Ethereum, and for now it seems difficult for ETH to revive before April 1.

When Ethereum is technically analyzed, the price retreated to the $1,660 level after the OBO formation, which started with the $1,730 break the previous day. However, during this retreat, a short reverse flag formation also occurred. The reverse flag formation also points to $1,540 levels, which is very close to the OBO target. If the $1,670 level, which corresponds to the Fibo'50 level, is broken, the price pressure may increase and these levels may come to the fore. 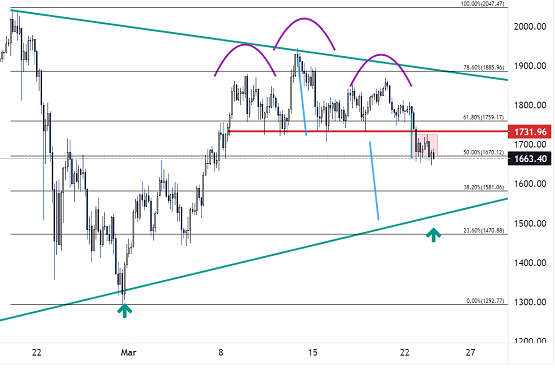 The AVAX/USD parity is priced at $29.50 this morning, with a daily rise of 3.2%. AVAX, one of the coins described as Ethereum killer, is actually a cheaper option for increasingly costly Ethereum transfers. While positive expectations continue for the Ethereum 1559 update, CoinMetrics' report published today has stated that the update will not provide a solution. In case of the specified situation, it will be inevitable that AVAX will be positively affected.

When the AVAX/USD parity is technically analyzed; on March 19, the parity started to react, which dropped to the $28.00 level after being subjected to selling pressures at the upper zone of the channel at $38.30. Oscillators, which have been in the sales area for a while, are moving up. If the resistance of $31.00 in the Fibo'23.60 slice is exceeded, the mid-band of $34.00 may be in question. The outlook is positive. 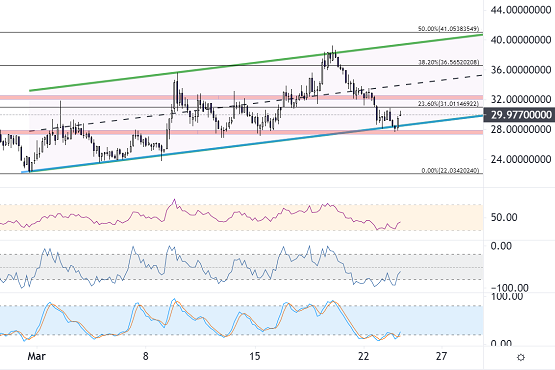 The XRP/USD parity retraced 1% this morning, pricing in the $0.54 zone. An important announcement that came to the Ripple agenda was released yesterday by the SEC. Ripple's lawyers had requested a detailed report from the SEC for Ethereum and Bitcoin, which were registered as non-securities. The SEC, on the other hand, refused to prepare the report, declaring that Bitcoin and Ethereum are not comparable to XRP. As SEC stated before, the main problem is not the structure, quality and quantities of XRP and the investor portfolio, but was that Ripple company used XRP as its financing. It was stated by the SEC that XRPs that are bought and sold for investors will not cause any problems. In this case, it can be clearly seen that Ripple is the subject, not XRP.

When XRP/USD parity is technically analyzed, the pair is in a weak course, evolving to a horizontal level, although the prices, which hold at $0.5440 on the Fibo'61.80 correction, try to find support from there. The major uptrend created as of January 27 is maintained, with a minor trend going above $0.5140. As $0.5140 is also the Fibo'50 slice, it will be followed as the strong main support. $0.5360 will be an intermediate support level. Although horizontality is dominant for now, the general outlook is slow in the upward trend. 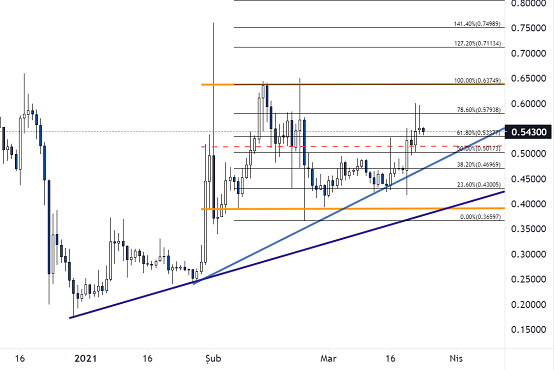 When the LTC/USDparity is technically analyzed, it is seen that the major channel is in theupward direction, but the minor downtrend is putting pressure on the pricing. Although the parity managed to push itself above $190 with its response from the $180 zone, the Bollinger remains in the lower band and the Bollinger mid-band is $195. Prices may get stronger above this level. On the 4-hour chart, the MACD and Momentum indicators form a weak picture with the weakening peak levels, but the intersection of the MACD indicator's maturity lines gives a positive signal. The resistances will be followed. In the responses, the $215 and $227 zone will be followed for reaction as the channel mid-band and minor downtrend crosses. 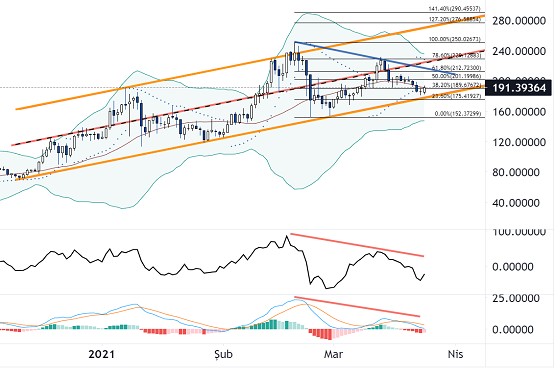 Chainlink is above the $27.00 level, up 2% this morning. The smart contract supply on Chainlink has been stable for the last 10 days. The amount of LINK kept in the stock markets has also been on a horizontal course for the last week. Thus, stagnation prevailing on chain data may have the same effect on prices. Chainlink is also the largest DeFi project, and the amount of cryptocurrency locked on DeFi platforms has been on the decline for the past few days. However, Grayscale has opened the door to corporate demand with the addition of LINK contracts to its portfolio, and it is seen that Grayscale purchased 7,000 LINK in 24-hour exchange.

If LINK/USD parity is technically analyzed, for the parity, which is under pressure under the $27.00 uptrend, if it goes above this level and holds on to its trend, positive pricing may accelerate again. For reactions above $27.00, the $29.00 Fibo'50 slice and initial resistance zone, followed by $30.00 in the Fibo'61.80 slice, may come into question. Oscillators used for the horizontal course parity show an upward trend from the bottom with upward ends. % R and Stochastic are ready to react on the support levels but the RSI is below the resistance zone. 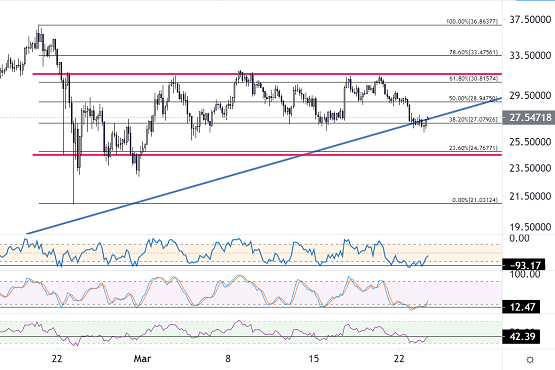 Basic Attention Token is up 2% this morning, pricing at $1.07. Grayscale, with the addition of BAT as a sales contract last week, caused strong increases on the BAT side. Today, we see that Grayscale purchased 58 thousand Basic Attention Tokens. The fact that BAT can now be used in the Smart Chain network has also enabled it to create a new audience for low cost and fast transfers. The number of new addresses continues to rise.

When the BAT/USD parity is technically analyzed, the parity showed a 7% price increase in the 24-hour period, following its reaction from the $1.02 zone. If the closes above the Fibonacci retracement at the $1.07 level make this level support, a move towards the $1.17 level may be in question. $1.17 will also be the upper band of the major bullish channel and therefore will act as a resistance. Because, in the event of the breakdown of the upper band of the channel, accelerated rise expectations will occur in line with the flag formation goal. 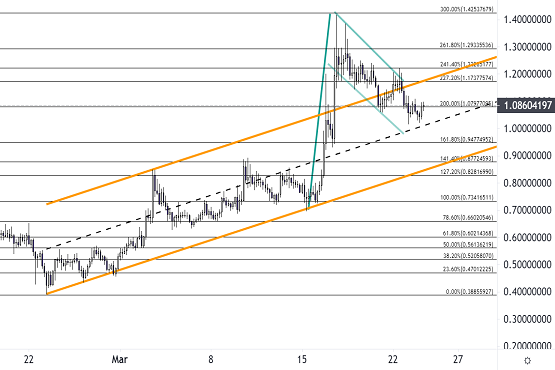