Investment firm Fidelity stated that it plans to increase the number of employees in its digital asset unit by 70%, while noting that the demand for BTC, especially from institutional investors, is still strong.

JPMorgan experts; He noted that the legal use of Bitcoin in a country like El Salvador would place a significant limitation on Bitcoin's ability to serve as a medium of exchange.

While the U.S. Federal Bureau of Investigation (FBI) has issued an industry-wide warning of possible attacks on exchanges and cryptocurrency holders, it has announced that there are threats that are actively tracking virtual asset platforms to seize these assets, causing financial losses in the process.

Minerd, the chief investment officer of Guggenheim Asset Management, kept his long-term BTC forecast at $400,000-600,000, while predicting that sales for Bitcoin will continue in the short term and the real bottom will be around 10-15 thousand dollars.

Cryptocurrency Option for Investors from SelfWealth

SelfWealth, which is listed on the Australian Securities Exchange (ASX) and manages approximately $4.4 billion in assets, plans to offer its clients 10 cryptocurrencies as investment options.

Woori Financial Group, one of the largest financial institutions in South Korea, has announced that it will offer crypto custody services to its clients.

In the statement made by the Ministry of Industry and Information Technology of China, it was stated that blockchain applications in the cyber security sector should be accelerated.

It was stated that one of the seven targets set by the Central Bank of the United Arab Emirates for the 2023-2026 strategy is to issue digital money.

Bitcoin, which is horizontal in the morning hours, is priced at $ 33,125. Among the macro developments expected today, while the US core inflation is expected to rise from 3.8% to 4%, in case of data above expectations, it may create a selling pressure on the market as it may create a perception that monetary expansion will end earlier. The fact that there is no news about the decline in cryptocurrency exchanges that started as of yesterday may be creating selling pressure in cryptocurrency exchanges and especially Bitcoin due to the expected inflation data in global markets. In addition, when we consider the Bitcoin chain data, we interpret the increase in the number of active and new addresses in the last 24 hours positively.

When we consider the BTC/USDT parity technically, for Bitcoin, which opens daily below the weekly DEMA level of $ 33,269, if these levels are broken to the upside, the price can move towards $ 34,838. If the selling pressure continues in the market and the price action is down, the closest support level will be the monthly DEMA ($32,379) levels. In the short term, buying near support and selling near resistance will be a more appropriate strategy. 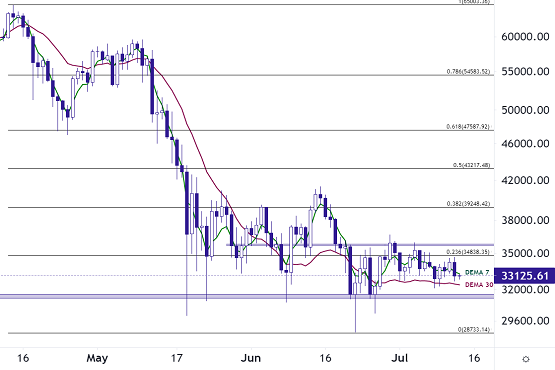 Ethereum, which has a sideways price movement in the morning hours, is priced at $ 2028. When we check the chain data for ETH, we see that the net flow metric from the exchanges has reached its lowest level since January 27 when we examine it by taking the 7-day average. The fact that the exit from the stock markets has increased so much shows that the current price levels are considered as a buying opportunity by the investors. When we look at the amount of ETH reserves held in the exchanges, it has reached its lowest level as of December 2018. With the market starting to recover, we expect ETH to diverge positively from the overall market.

When we examine the ETH/USDT parity in a technical sense, ETH, which could not break the $ 2329 level, which coincides with the Fibo'23.60 slice, started to be priced below its 30-day moving average. When we examine it in the daily period, we see that the horizontal market conditions are still valid for ETH. ETH, which broke the support level at $ 2042 yesterday, retested this level from below and received a reaction today. Stochastic, which gave a sell signal from the overbought zone on July 7, continues this signal. If we fail to break the $2042 resistance on the upside again, pullbacks for ETH could continue for a while. 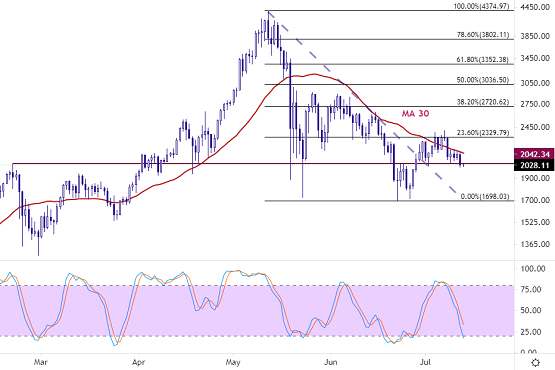 AVAX, which is dominated by sideways price action in the morning hours, is priced at $12.23. Continuing the price movement in the rising channel for about 4 weeks, AVAX broke down the lower band of this channel from the $ 12 level last night, but started to price in the channel again with the support it found quickly. For AVAX, which we see that the volume does not support the recent rise, the pullbacks may continue if the lower channel band is broken down again. Although it has given stochastic buy in the 4-hour period, AVAX, which has resistance at the level of $12.3, where the 30-day moving average is located, is not expected to be relieved unless this average is exceeded. 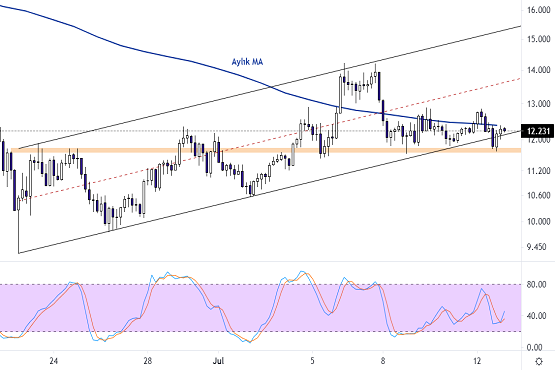 Moving sideways in the morning, XRP is priced at $ 0.627. While the process in the Ripple and SEC case was ongoing, August 31 was given for the completion of the initial discovery phase for the documents that the SEC had to submit to the case. While this is the closest expected date, a decision is also awaited by Judge Netburn on whether to testify from the former SEC employee. 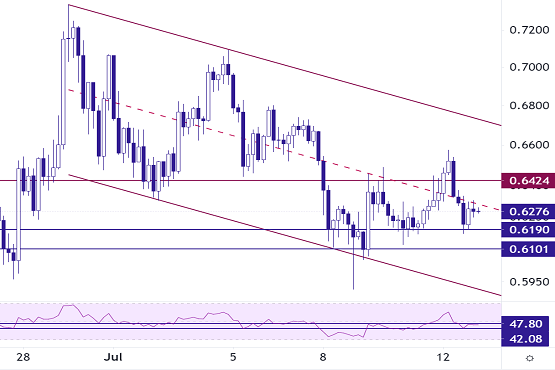 Litecoin, which is dominated by sideways price action in the morning hours, is priced at $ 133.6. When we examine the chain data for LTC, it is seen that the number of active addresses and new addresses has increased in 7-day averages despite the decrease in LTC price. These metrics show an increase in investors' interest in LTC.

When we examine the LTC/USDT parity technically, LTC, which could not hold above $137.3, which is the Fibo'23.60 slice, broke the support at $134.65 to the downside and the breakout was realized with above-average volume in the 4-hour period. In the past 4-hour candle, this level was retested and could not be exceeded and worked as a resistance. In the 4-hour period, the stochastic maintains the sell signal. The next support level for LTC, where pullbacks are expected to continue in the short-term period, is located at $125, which is the Fibo'50 tranche. 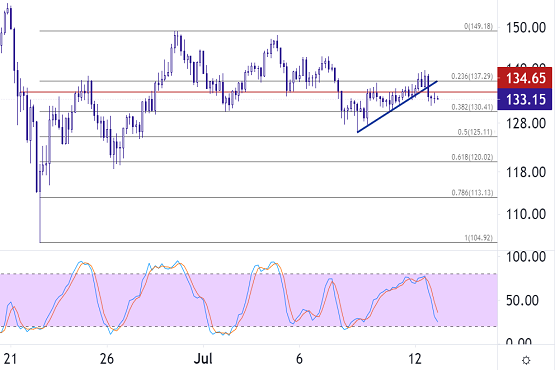 LINK, which is flat in the morning hours, is priced at $17.61. Although the increase in the number of active and new addresses as of yesterday, when we examined the chain data of LINK, is seen as a positive development, LINK, which was affected by the general decline in the market, is trying to recover as of the morning hours.

When we consider the LINK/USDT parity technically, we see that it is priced just above the support at $ 17.60. In case the price continues to move upwards, the nearest resistance level is at $19.04. If the support at $17.60 is lost, the price could retreat towards the $16.68 levels. For LINK, which is in a horizontal course in the short term, it will be a healthier strategy to buy and sell by following the support and resistances. 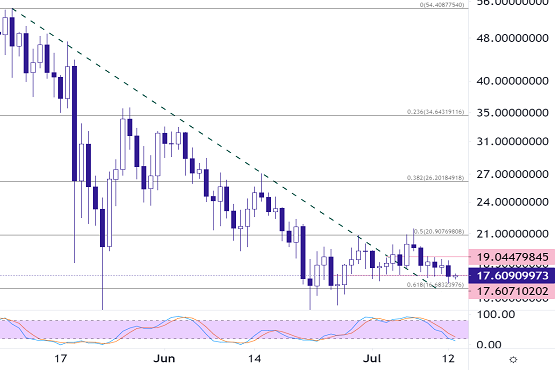 BAT, which fell 0.29 percent in the morning hours, is priced at $ 0.546. When we analyze the chain data of BAT, there is a decrease in the 7-day average of the number of active and new addresses. Technically speaking, the BAT/USDT pair is priced below the weekly DEMA ($0.551) level, and BAT, which opens daily, is priced just above the support at $0.541. If the support at these levels is lost, we may see the price pull back towards the $0.51 levels, which coincides with the monthly DEMA. As the closest resistance level for BAT in the daily period, we would expect the $0.551 levels to coincide with the weekly DEMA. In the short term, buying near support and selling near resistance will be a healthier strategy for BAT. 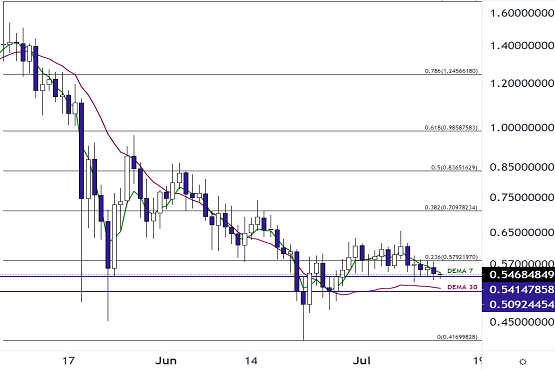