There are more than $100 million worth of Bitcoin on the Lightning Network for the first time since its launch in 2018. The second layer scaling solution currently has 2,370 Bitcoins worth about $114 million.

Twitter is reportedly laying the groundwork for creators to enable the ability to send tips with Bitcoin (BTC).

In an interview with the Financial Times on Wednesday, SEC President Gary Gensler reiterated his request for cryptocurrency trading platforms to register with the SEC and claimed they could cause legal problems by serving outside the framework of the United States.

Email Emerges Stating There Are No Rules for Investing in Bitcoin, ETH or XRP in SEC

The United States Securities and Exchange Commission (SEC), which claims jurisdiction over XRP, has no rules against holding or trading crypto, according to an email sent by the SEC.

Standard Chartered is reportedly the first bank to join the Global Digital Finance (GDF) Boss Board. StanChart, along with other members, will work together to accelerate the adoption of best practices in a digital asset environment.

In order to analyze smart contracts with decentralized finance (DeFi) developments, the SEC has reached an agreement with blockchain analytics company AnChain.AI.

Ethereum NFT Bridge Coming to Phantom
A new contract, ERC-721, will help bridge the gap between Ethereum and Phantom, allowing users to seamlessly transfer NFT from one blockchain to another.

Bitcoin, which gained about 1.20 percent in the morning, is priced at $49,360. Bitcoin has more than $100 million in the long-talked about Lightning Network for the first time since its launch in 2018. The second layer scaling solution currently has 2,370 Bitcoins worth about $114 million. Twitter will reportedly either integrate Lightning for creators. Positive for bitcoin adaptation and use.

When we consider BTC/USDT parity in technical terms, Bitcoin, which is negatively divergent relative to the market as a whole, broke its downward trend as of August 23rd at $48,300 yesterday, accelerating its rise. Although MACD continues to sell during the daily period, there is a recovery. The short-term downward trend breakdown will carry Bitcoin towards $50,500-$52,000. 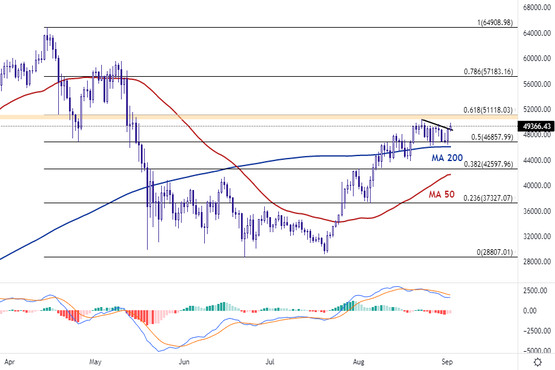 Ethereum, which lost about 2.1 percent in the morning, is priced at $3744.77. According to Bitcoin, ETH, which recently experienced positive divergence, continued this positive divergence yesterday, gaining about 7.60 percent against Bitcoin in just one day.

When we consider the ETH/USDT pair in technical terms, ETH accelerated the upward movement with the upward breakdown of the horizontal/jammed price movement in the band of $3350 to $3000, and yesterday reached the level of $3840 that we mentioned in the bulletin with the trading volume that was above the 20-day average and received a reaction from this level. When we look at short-term trading volumes, we think the reaction will be limited. As long as the upward momentum remains constant, our new price targets are $4170 and $4420, respectively. 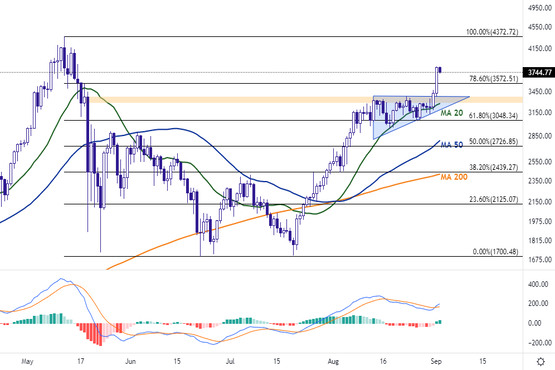 The AVAX, which gained about 2.85 percent in the morning, is priced at $43.20. When we examine the AVAX/USDT pair technically, AVAX, which is seen as having completed the correction movement at 38.16, which corresponds to Fibo'23.60, has risen towards its initial target price of $44.5 with support from this level. The breakdown has not yet occurred in AVAX, which has been testing this level for the last 3 days. Although the sell signal continues on the daily MACD, when we examine it in a 4-hour period, we see that it signals buy again. With the resistance level at $44.5 for the AVAX and the upward break of the short-term falling trend, we think there will be rises towards the February 10 peak level of $60.30. 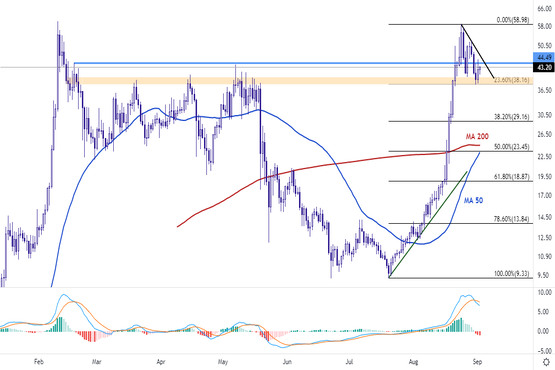 Ripple, which dominates the horizontal price movement in the morning, is priced at $1.2347. The United States Securities and Exchange Commission (SEC), which claims jurisdiction over XRP, has no rules against holding or trading crypto, according to an email sent by the SEC yesterday. The release of the people involved in the case in this sense was negatively received by investors.

When we consider the XRP/USDT parity in technical terms, XRP, which tested the downward trend that existed as of August 15th, received a reaction from these levels in the morning hours. When we look at MACD in the daily period for XRP, which we think will experience an acceleration in the price movement with the upward break of the $1,248 level, which coincides with both the Fibo'50 slice and its downward trend, it appears that it is recovering to signal buy. As of the beginning of today, the 50-day moving average has cut the 200-day moving average upwards, creating a "golden cross." We maintain our expectation of an uptick for XRP. 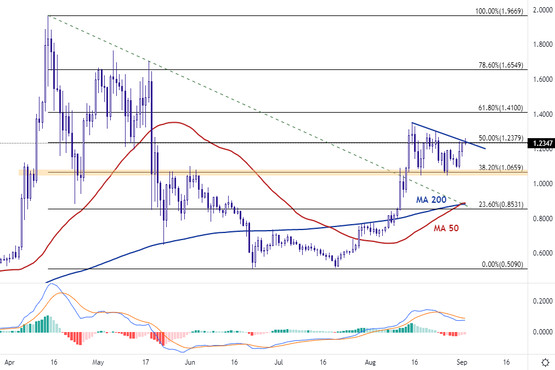 LTC, which gained about 0.60 percent in the morning, is priced at $181.4. When we consider the LTC/USDT parity technically, this jamming area is broken upwards as of this morning for LTC, which has seen a price movement that has been stuck for about 20 days. LTC, which yesterday broke up with above-average volume of $175.9, which corresponds to Fibo'38.20, closed above this level. We think that the level of $193.60, which corresponds to the 200-day moving average, is a significant resistance level, and that the rises will accelerate with persistence above the 200-day average. 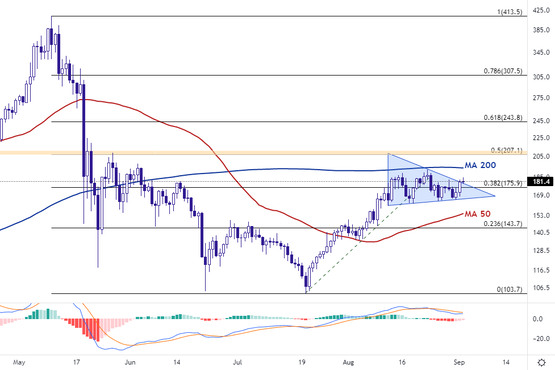 LINK, which lost about 2.70 percent in the morning, is priced at $28.81. When we examine the LINK/USDT parity in technical terms, LINK recently broke the significant resistance level at $26.67 with above-average trading volume and closed above the level of $28.00 daily, which corresponds to its 200-day moving average with the momentum it has achieved with this breakdown. When we examine it in the daily period, it appears that the stoics continued to signal the buy. We think LINK will provide permanence on its 200-day moving average and continue its upward trend. Our first short-term price target is $31.33, which equates to Fibo'61.80. 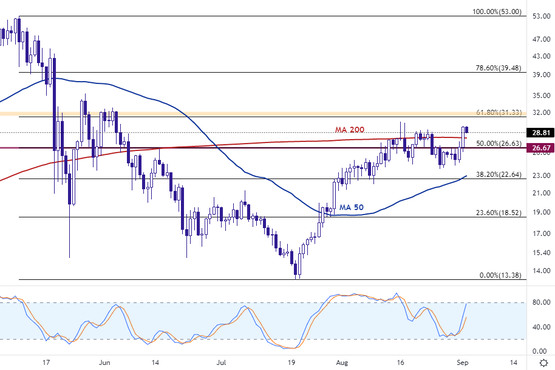 BAT, which lost about 1.70 percent in the morning, is priced at $0.849. BAT continued to be priced above the rising major trend, which passed the July 20 low and august 19 low when we consider BAT/USDT parity technically, and yesterday broke the level of $0.843, which corresponds to its 200-day moving average, upward with above-average trading volume. In BAT, which today rejects this level, it appears that the retestin was successful and held on to it in the morning. The first short-term price target for BAT is read as the previous high of $0.908. 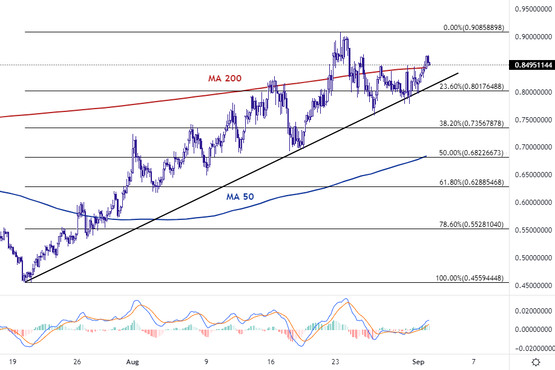