The Ukrainian Parliament passed a law to legalize the cryptocurrency. Early last month, the draft law was being drafted in parliament after a report was published on allowing payments in cryptocurrencies.

Switzerland's SIX Stock Exchange has received regulatory approval to launch a digital exchange, the first step towards shaping the markets of the future.

Cryptocurrency Mining Should Be Registered and Taxed in Russia, Says Chairman of Financial Market Committee

According to Anatoly Aksakov, chairman of the Financial Market Committee of the Russian Parliament, cryptocurrency mining should be registered as entrepreneurial activity and taxed in this way. He also thinks russian digital currency regulations need to be improved.

After El Salvador made the Bitcoin legal tender, a survey was conducted to determine whether US adults supported or opposed a similar move in the United States. Of the 4,912 adults who participated, 61% did not oppose it.

BlackRock is the world's largest asset manager, with about $9.5 trillion in assets under management (AUM) at the end of the second quarter. Bitcoin could rise sharply, the agency's CIO said in a recent program.

According to a recent news release, the Algorand Foundation, the primary group behind layer-1 blockchain Algorand, announced the launch of Viridis, a $300 Million DeFi fund in Algorand to accelerate, finance and support DeFi innovation.

Germany is running more Bitcoin nodes than the US for the first time, according to Bitnodes' data analysis. There are currently more than 10,000 listening Bitcoin nodes worldwide, of which 1833 are in Germany and 1821 in the US, 549 in France and only 152 in China.

Customers of Bancoagrícola, El Salvador's largest bank, will now be able to pay their loans and credit card bills in Bitcoin.

Bitcoin, which lost about 2.8 percent in the morning, is priced at $44,700. Looking at the newsfeed, the Ukrainian Parliament passed a law to legalize the cryptocurrency, and Switzerland's SIX Stock Exchange received regulatory approval to launch a digital exchange, the first step towards shaping the markets of the future. In the chain data, we see that bitcoin's supply held on the exchanges has reached its lowest levels in 3 years.

When we consider BTC/USDT parity in technical terms, BTC, which has risen above the 200-day moving average of $45,887 with volumeless rising price movements over the weekend, is now seen to have sharp declines with the daily candle opening. MACD maintains the sell signal during the daily period. If the daily close is below the 50-day moving average, btc can continue to the blue-marked support zone ($42,000 to $42,600) of withdrawals. 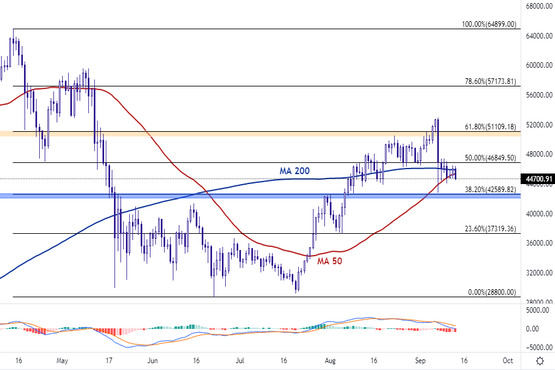 Ethereum, which lost about 4.00 percent in the morning, is priced at $3268.44. When we look at the latest figures in the incination procedures that started with the EIP 1559 update, we see that approximately 282,729 ETH burnings occurred as of this morning, approximately $925,530,734.

When we consider the ETH/USDT parity in technical terms, ETH, which has risen to the level of $3472 with its 20-day moving average with the upward movements experienced over the weekend, continues to retreat with the daily candle opening today with the reaction it has seen from this level. When we examine it in the daily period, the sell signal from MACD remains continuous. If intraday retreats continue in ETH/USDT parity, the first significant support level is $3140, which is the 50-day moving average. 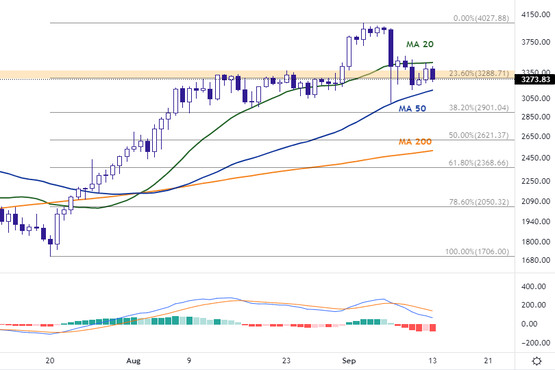 AVAX, which lost about 10.05 percent in the morning, is priced at $53.44. When we examine the AVAX/USDT parity technically, AVAX, which broke its downward trend as of August 24 and closed above this level on Friday, continued its rise with above-average trading volume, as opposed to the market over the weekend, reaching its new peak level of $64.90. In the daily period, there is a sell signal in metrics in a 4-hour period against the buy-to-let signal that comes in MACD. The rise is expected to continue if the support zone on the AVAX at $52.4 - $53.50 as of the daily close is maintained. 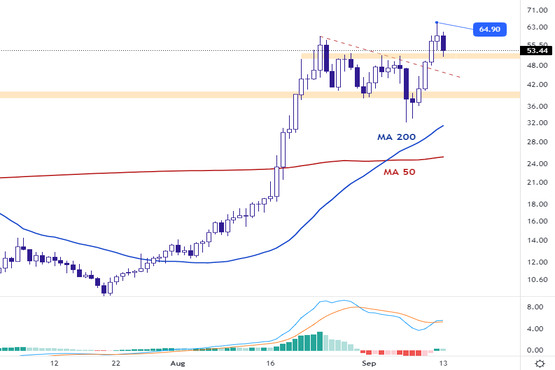 Ripple, which lost about 4.40 percent in the morning, is priced at $1,716. When we consider the XRP/USDT parity in technical terms, today it has suffered a retreat to the level of $1.0552, which it closed daily on Friday, wiping out the return achieved by volumeless rises over the weekend with the daily candle opening. Priced in the key support area at $1,045 to $1,078, XRP could see retreats to the 50-day moving average of $1,021 if that region breaks downwards. 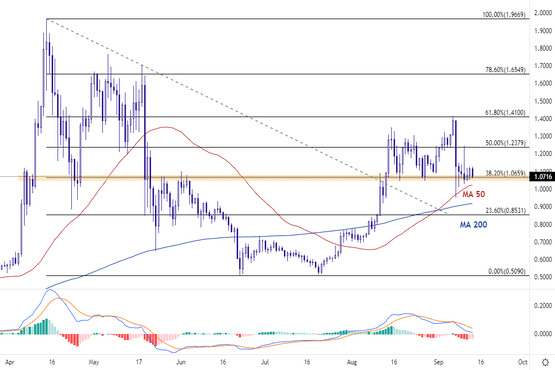 LTC, which lost about 3.4 percent in the morning, is priced at $176.5. When we consider LTC/USDT parity in technical terms, as seen in almost all markets, the return of approximately 5.10% achieved at the weekend in LTC is seen as deleted by the withdrawal movement that started today as of the daily candle opening. LTC, which we saw a squeezed price movement from September 8, is priced close to $176, which corresponds to Fibo'61.80 as of morning. The price movement that we think will determine the price direction in LTC will come with the break of the jamming area. Withdrawals can continue to the 50-day moving average of $170.3. 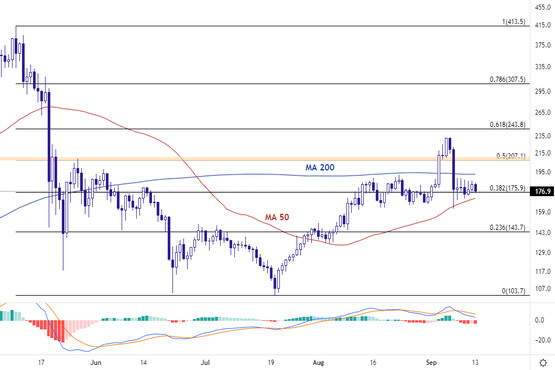 LINK, which lost about 5.78 percent in the morning, is priced at $27.66. When we examine the LINK/USDT parity technically, although trading volumes were at low levels throughout the market over the weekend, LINK saw an increase of about 9 percent on Sunday with trading volume close to the average for the last 20 days. With this rise, LINK, which broke the 200-day moving average of $27.90 and closed above it daily, started to be priced below this level again with the strong sales experienced throughout the market in the early hours of this morning. In the daily period, with the candle closing yesterday, we see that the inventory is signaling buy. If LINK can close the day on top of the 200-day moving average, we expect rises towards $31.33. Otherwise, retreats towards the $26.00 level with a 50-day moving average could deepen. 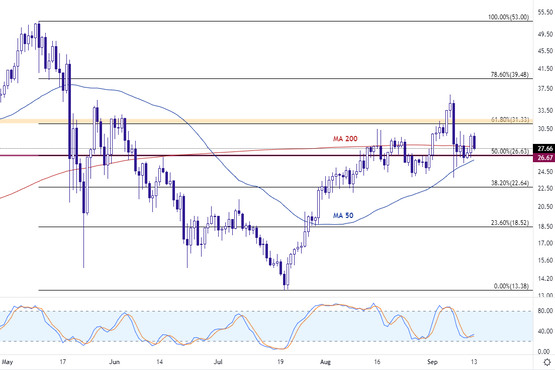 BAT, which lost about 6.00 percent in the morning, is priced at $0.762. When we consider BAT/USDT parity in technical terms, the breakdown of this jamming area can bring with it hard price movements for BAT, which has seen a price movement stuck with the sharp declines on September 7th. When we examine it over a four-hour period, there is a peak formation, although the MACD continues to signal. However, bat, priced just above the 50-day moving average of $0.756, is the next level of support for BAT to be followed if it breaks this level downwards, equivalent to the Fibo'50 tranche of $0.729. 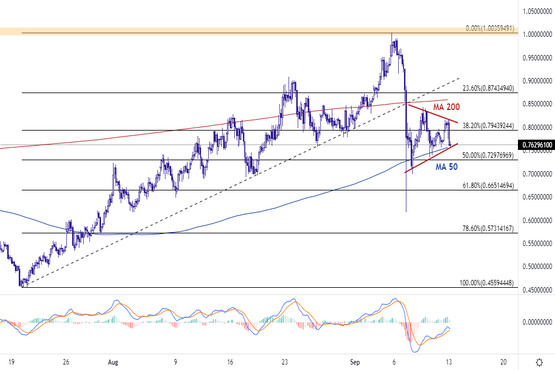