Fantom (FTM) started to be listed on ICRYPEX.

Ripple achieved a legal victory over Tetragon, which sued him after the decision of the US Securities and Exchange Commission (SEC). Tetragon purchased shares in Ripple under the contract it signed with Ripple in 2019.

The $ 1.9 trillion package bill, another of the aid payments made by the United States during the pandemic process, was passed by members of the Senate. Tuesday will be considered by parliament as a final stage, followed by the signing of President Joe Biden and distributed to U.S. citizens.

Bitcoin and Ethereum Investment from a Chinese Company

Galaxy Digital has set up two Ethereum funds this year. These two funds, one registered in Delaware and the other in the Cayman Islands, attracted a high level of interest from institutional investors and received a total investment of $ 32.1 million.

Ethereum Improvement Proposal (EIP) 1559 will be included in the code base in July of this year. Thus, miner fees will be determined algorithmically, making it easier for users to pay a fair fee.

Major Cineplex Group, the largest movie theater chain in Thailand, announced that they have launched a pilot that will allow customers to buy movie tickets with cryptocurrencies.

Information about the cryptocurrency, according to data quoted by the website of Turkey Similarweb content and output to the highest level of all time worldwide traffic. Turkey is playing a role in approximately 3% of the total traffic to the site.

Garlinghouse: We Are Growing Rapidly in Asia and Japan

In an interview, Ripple CEO Brad Garlinghouse stated that despite the lawsuit between Ripple and the SEC, investors in the Asia Pacific region have not had any problems. Stating that it has clarity regarding the legal regulations in Asia and Japan, the company stated that XRP activities here are gradually growing.

According to the data transferred by Whale Alert, a Bitcoin transfer of $ 1.45 billion was made within 24 hours on March 5. Although it is not known by whom the transfers were carried out, there were transfers in which 13 thousand BTC worth 700 million dollars were sent at once.

Bitcoin is welcoming the new week above the $ 50,000 level in the face of positive news. The decline in volatility and the greed index signaling buying is positive, but today the overall risk appetite of the entire financial market is low. First of all, we saw that the demand of institutions continued with the BTC purchases of MicroStrategy on Friday and Meitu yesterday, and even now that the Chinese company has added BTC to the balance sheets of companies around the world. On the other hand, BTC dominance dropped below the 60th threshold at 59.9%. The loss of bitcoin weight is not BTC; While showing that it will be ETH, BTC was 10 points behind ETH in weekly returns. There is no significant change in the number of active and new addresses. For now, the basic and positive developments are being priced.

On the technical side, the BTC / USD parity broke its descending trend. BTC, which came out of this pressure after breaking the $ 50,160 level, needs to break the Fibo'50 zone, which corresponds to the $ 50,700 level, to continue its rise. Because we are currently in the horizontal channel zone and crosses the $ 52,500 level. Although it is not an accelerated picture for now, it is a horizontal and upward-reactive situation. The outlook is positive in BTC, which has found reaction in supports in the withdrawals. 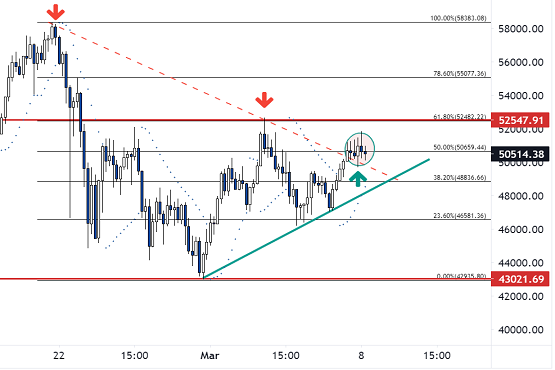 Ethereum confirmed the direction of the ETH-BTC shear, with Bitcoin dominance falling behind 60% and its own dominance approaching 13%. This morning, a major developer was released on Ethereum, which is traded with varying prices in the $ 1710 region with a horizontal view. EIP-1559 will be completed in July, and from now on, the miner fees, which we call gas fees, will be paid to the network network as a base fee and ETH burning will take place. This is both a solution that will push prices up in terms of ETH supply and a situation that can lower network fees. Meitu's acquisition of 15 thousand Ethereum is also a pioneer in terms of ETH, which is in the safe of corporations. With these news, it can be expected that ETH will take precedence over BTC.

When we consider ETH / USD technically; First, the channel-based ETH-BTC scissors began a move in favor of Ethereum. The hold here has been an important catalyst, as it did not fall behind the peak level of $ 1416 a week ago. The decreasing trend, which started at the level of $ 2040 in the daily period, was broken with an upward cut of $ 1600. In addition, the TOBO formed in the daily period points towards the $ 1900 level, which is $ 1755, which corresponds to the Fibo'61.8 level. Even though the daily pressure has come from here, with the breaking of this region, the rise can accelerate. For this reason, we follow the support in the withdrawals. The outlook is uptrend and positive. 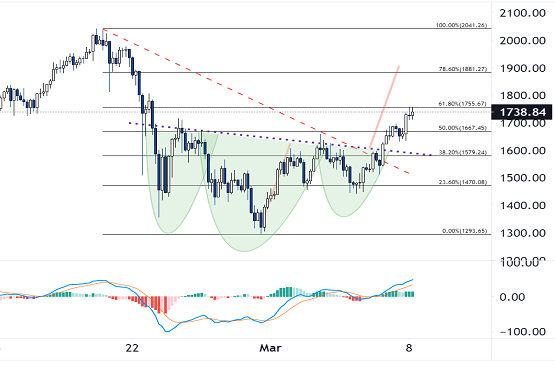 The AVAX / USD pair retreated by 3% this morning, pricing in the $ 25.85 region. Unlocking AVAX, which will take place on March 9 (tomorrow), will make AVAX sales valid for some AVAX holders under staking and public offering. Although it is not possible to make a final calculation, let's remind that approximately 40 million AVAXs will be released in the market. Mathematically, it is more likely to withdraw pricing for AVAX whose supply has increased, on the other hand, it is also possible to keep unlocked AVAXs in cold wallets. For this reason, although it is not a frightening situation for long term AVAX investors, this development should be considered for short term investors.

When the AVAX / USD parity is considered technically, we see that the decreasing trend has left its place to the consolidation phase. The downward breakdown of this region and possible sags below $ 22.00 can be considered as an opportunity for AVAX investors as AVAX continues to maintain its potential in the medium to long term. During the day, a horizontal course of 24.00-27.00 $ can be followed. 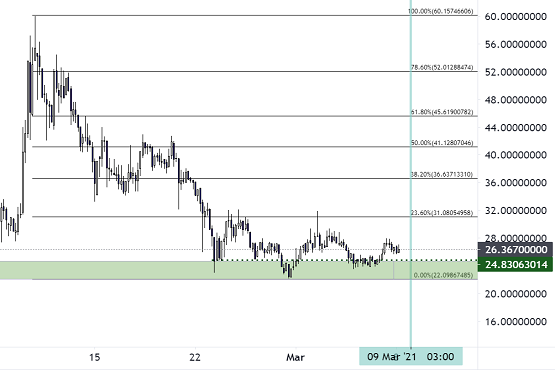 The XRP / USD pair is priced in the $ 0.46 region on the first day of the week and there is a horizontal movement on a daily basis. After the lawsuit between the SEC and Ripple, there were companies that wanted to take advantage of Ripple and turn the situation in their favor. While one of them was MoneyGram, the other was Tetragon as you will remember. While legal action was initiated for MoneyGram making statements against Ripple, we now see the Tetragon case resulted in Ripple victory. On the other hand, the legal process with the SEC is ongoing and there was a counter action from Ripple partners last week. The most striking situation here is that the XRP producer Ripple gets rid of its "criminal" image and increases its power in the face of adverse situations.

If we examine the XRP / USD parity technically, there was a reaction from the $ 0.43 support zone in the Fibo'23.60 tranche, but pricing could not be obtained above the $ 0.47 resistance zone. For this reason, the said horizontality of XRP below this resistance level may create a voluminous reaction and the $ 0.49-0.50 zone may be on the agenda again. For now, the course is horizontal but positive on the basis of indicators. As long as the TOBO formed at the bottom does not drop below the $ 0.4580 level, it will be active, and this four-hour view will be active up to $ 0.5050. 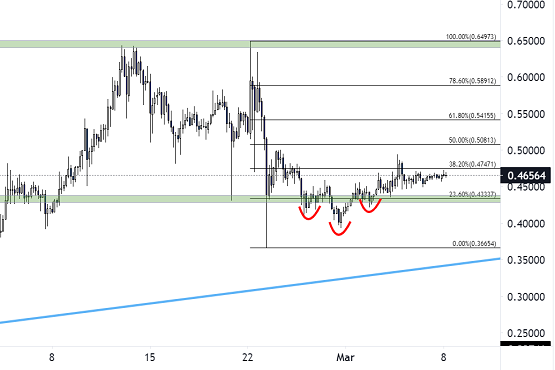 The LTC / USD pair retreated 1.7% in the morning hours, remaining in the $ 187 region. Even though the yield gap between BTC and Litecoin has created higher returns in LTC, the fall of BTC dominance below 60% weakens altcoins' commitment to BTC pricing, triggering more independent rises. For this reason, in the next period, with the weakening of BTC dominance, we can see pricing converging to its potential for Litecoin, because the chain data shows the actual price of Litecoin (the pricing that should be according to market value data) in higher regions. This indicates that Litecoin's current pricing remains discounted.

When the LTC / USD parity is examined technically; The uptrend, which started on December 10, is preserved and the reactions here are strong as can be easily seen in the daily period. The support zone of $ 179 contributed to the rise of the pair for the short term and brought with it a 9% rise. The $ 179 zone remains the first support for the pair, with initial resistance at $ 204. 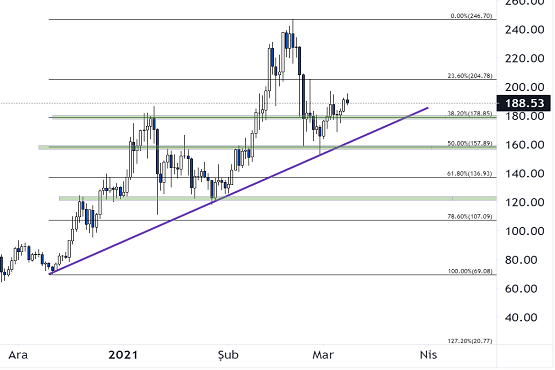 Chainlink is priced in the region of $ 28.50 with a horizontal change this morning. The strong increase in the number of transfers in the last month and the fact that the amount of smart contracts active on Chainlink made a new peak every day was the biggest indicator of the increase in demand on LINK. Current chain data shows that the amount of LINK transferred from exchanges to wallets has gained momentum. On the other hand, most of the user orientation was on LINK after the network problems in Ethereum due to the fact that it is the largest ETH token with market value. The month of July has been shown for improvements to Ethereum's London Hard Fork, and it will not be surprising that until that date, LINK has been more positive than ETH in monthly returns. It is very positive for Chainlink that LINK is also a pioneer in the decentralized finance system that has recently grown on the DeFi side.

The LINK / USD pair climbed back to the $ 29.25 channel midband after its reaction from the $ 27.00 support level. Thus, the upside break of the $ 28.86 level on the Fibo'50 correction was realized and this level was made support. Thus, if a voluminous mid-channel break occurs, technical analysis signals to test the $ 30.75 resistance first and then the $ 33.00 channel upper band. Although there is a retracement for now due to the weak risk appetite in the market, we see these retractions as potential for the coming period. 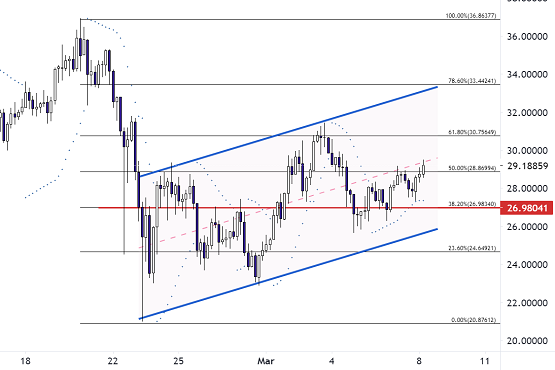 BAT / USD is down 2.7% in the early morning hours due to the low risk appetite in the market this morning. The range of $ 0.64-0.71 appears as a consolidation zone. On the other hand, the flag formation continues technically. Unless the $ 0.58 zone breaks down, it will maintain its potential. However, the lack of appetite in the table that we see now shows that it will be a little horizontal. The outlook is horizontal but in an uptrend. 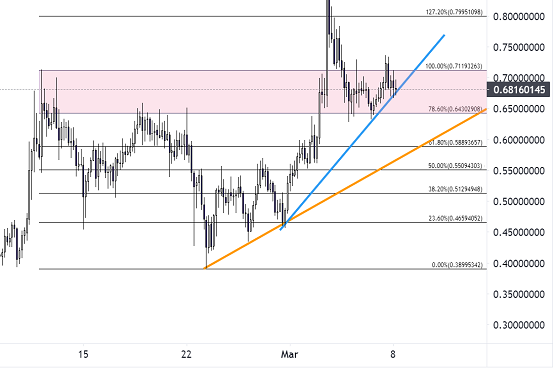