Indian Companies Will Have to Disclose their Cryptocurrency Assets

According to the new rules introduced by the Indian government regarding cryptocurrencies, companies that have invested in cryptocurrencies will have to disclose their financial statements together with their crypto assets from April 1.

Acala Network Will Work with Polkadot

DeFi platform Acala Network has announced that it is moving towards the goal of providing cross-chain interoperability in the Polkadot ecosystem at the official parachain launch. Polkadot's parachain ecosystem will use fragmented side chains to process transactions in parallel.

The Use of Digital Yuan Is Increasingly Widespread

In cities where Digital Yuan's pilot tests are conducted in China, Chinese citizens apply extensively to the relevant institutions for the use of digital yuan. Six state-owned banks in Shanghai have started accepting requests from the public, thereby giving citizens access to digital wallets.

Microsoft Will Use Bitcoin for Identification Solution

One of the world’s biggest companies, Microsoft has announced that they are working on a decentralized identification application. With the ION system, there will be no need for traditional identification systems such as user name or e-mail.

Target is $80K in April Options

A P2P crypto derivatives exchange Deribit’s options traders aim Bitcoin to be over $80,000 by the end of April. Contracts with a price target of $80,000 are  of 4,000 Bitcoins worth.

ETH Energy Consumption Will Be Reduced

Blockchain security provider Sigma Prime has announced the first merger between two Ethereum networks. Stating that this step will bring about a 99.98% decrease in Ethereum energy consumption, the company argued that this is very positive for ETH.

Ripple Asks the Judge to Keep Some of Its Documents Sealed

In its latest request, recently asked the Judge to seal some of its documents requested by the US Securities and Exchange Commission. According to the statements made, the documents requested to be sealed contain some details about the XRP distribution process.

Bitcoin is starting the new week horizontally above $55,000. Last week, we mentioned the Bitcoin purchases of conscious investors as well as the prices that fell to the $50,000 band. In addition to the cessation of Bitcoin sales in all wallet amounts, we have seen Bitcoin accumulations and mentioned that the Bitcoins withdrawn from the stock markets. In addition, stable coin reserves held on exchanges exceeded $10 billion and broke a record. Therefore, this decline was an opportunity watched for purchases. In addition, according to the seasonality analysis, the month of March, which we have entered into its last days, is the month the most disliked by the Bitcoin and ended up generally high losses.

When the BTC/USD parity is technically analyzed, the price continues with the decreasing channel. $50,200, which corresponds to the Fibo'61.8 slice last week, also corresponds to the Bollinger lower band. Looking at the price level we have reached, the price has reached the middle-upper band. It must exceed $56,400 in order for the channel to break upward and equalize the pressure, and $57,150 to pass the Bollinger upper band. For now, Bitcoin, which continues to accumulate or gather strength, has clung to the weekly DEMA (double accelerated exponential average). As the transaction volumes have not yet confirmed the break, accumulation is followed in withdrawals and support purchases continue. The view is horizontal but positive. 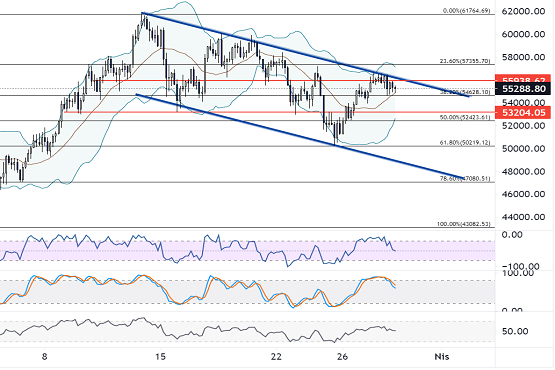 Ethereum starts the new week just behind the $1700 with a buying trend. The amount of ETH locked on ETH 2.0 staking again broke the all-time high level. Especially during the periods when the ETH price was far from fluctuating and rising, the investors started to accumulate and lock in calling this period "cheap Ethereum". Although Ethereum has a potential with the end of the Berlin hard fork in the second week of April and the launch of Layer 1 in the first week of May, the concerns remain days before the attack on April 1. Therefore, we may have seen the bottom, but we can wait a little longer for the rise.

When the ETH/USD is technically analyzed, the TOBO formation, which has been formed in the $1,570 zone, where the upward trend since January 11 has passed, can be activated with the break of the $1,720 level, and the squeeze here can throw itself into the $1,870 zone. In such a case, the minor downward trend will be broken and another pressure on the price course will be lifted. The outlook is horizontal but positive, if the $1,720 level breaks, it could start to move. 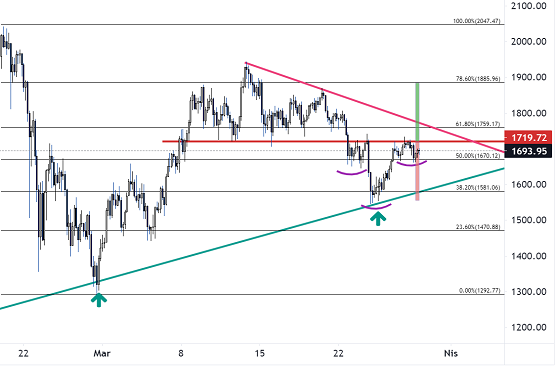 The AVAX/USD parity is pricing in the $29.00 zone, up 1.3% this morning. The Avalanche platform announced that it had reached 900 validators the day before. This increase in the number of validators for AVAX, a Proof of Stake coin, makes the network more secure. This can trigger an increase in user confidence and demand at the same rate. On the other hand, the first stage upgrade, which will be active on Wednesday, will also be activated on the network. Thanks to the upgrade called Apricot, the main network will remain healthy and users will save 50% on transaction fees when connecting with smart contracts on the C-Chain. AVALABS Business Development Director Aytunç Yildizli, who was the guest of our ICRYPEX YouTube channel on Friday, explained in detail.

When the AVAX/USD parity is technically analyzed, the parity's retracement reaching 40% after the $34.00 level tested on March 20 caused the $24.50 zone to be tested again. Although the reaction purchases concentrated above this level carried AVAX to the $29.00 zone, an upward break of the $31.25 level corresponding to the Fibo'23.60 slice should be realized in order to strengthen the upward trend. The parity is also under a bullish trend in the $29.00 zone, making this level resistance. In case of breakage, it may increase gradually by holding on to the upward trend. Above $31.25, the second resistance zone at $36.70 will be followed. 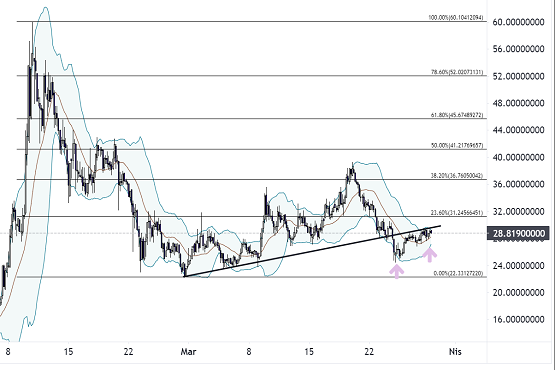 The New York court rejected the request after Ripple investors asked Ripple to intervene in its lawsuit with the SEC. In the current application to the court, a similar request was created due to the persistence of the investors again. The judge sent a letter of rejection in order not to affect the course of the case. Investors' requests are read positively on the XRP side. However, Ripple has asked the Judge to keep some of its documents on XRP sealed in their recent letter, some question marks in the background have surfaced again.

The XRP/USD parity is standing at $0.55, up 1.60%. The movement continues between the $0.53 support in the Fibo'61.80 zone and the $0.57 resistance of the descending trend that creates the triangular tightening appearance. The parity is approaching the final stages of this tightening. Closings above $0.57 may bring accelerated movements. On the uptrend, there may be a $0.70 trip. The breakdown of $0.57and the purchase volume should be followed. Oscillators are not giving a strong directional signal on the 4-hour chart. 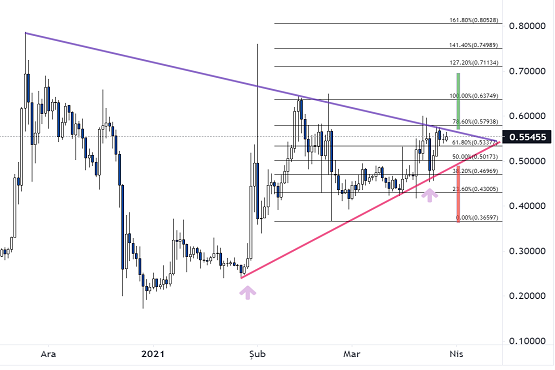 The LTC/USD parity is priced at $194 this morning, up 5%. Even though it has closed the weekly income spread with Bitcoin with a daily value gain of 5%, it is still 8 points behind BTC which reached 19% on a monthly basis. For Litecoin which has a high correlation with BTC and will want to close the return gap, this may mean testing the $210 level with an 8% price increase. The $210 level is also the level where the downtrend Litecoin started on February 19 has passed.Therefore, there may be an increase in buying appetite for the parity, which eases selling pressures of $210 and above. Then, within the medium term expectations, the $230 zone may be possible. For the steady rise of the LTC/USD parity, it can be expected that the dominance will continue to decrease on the BTC side and the volatility in the said BTC levels will decrease. 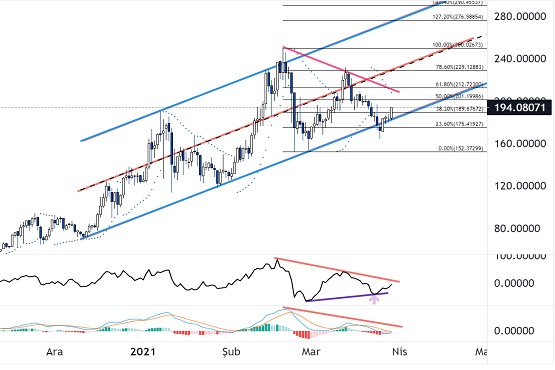 Chainlink is pricing in the $27.00 zone this morning, up 1.5%. Grayscale has added 5 tokens focused on creating solutions in different areas to its purchase contracts in recent weeks. One of them was Filecoin (FIL), which attracted attention with its success in recent days and provided storage solutions. According to new announcements, the storage network FIL has been integrated with Chainlink, which offers oracle service. Thus, Chainlink oracles will be used in Filecoin's decentralized storage system. While this situation is positive in terms of Chainlink collaborations, it once again underlines that Chainlink's basic story is strong.

When the LINK/USD parity is technically analyzed, the parity is not yet separated from the horizontal channel that it started on February 22, and the longer the channel maturity, the stronger the horizontal movement. For this reason, LINK has to exceed the limit of $32.00, which is the upper band of the channel, and be able to maintain permanence above this level. Although it is possible to achieve a 35% return in the horizontal band between $23.70 and $32.00, resistance breaks should be followed so that we can speak of new records for Chainlink. For the short term, the initial resistance above $27.00 is $29.00, which corresponds to the 50% slice of Fibonacci. 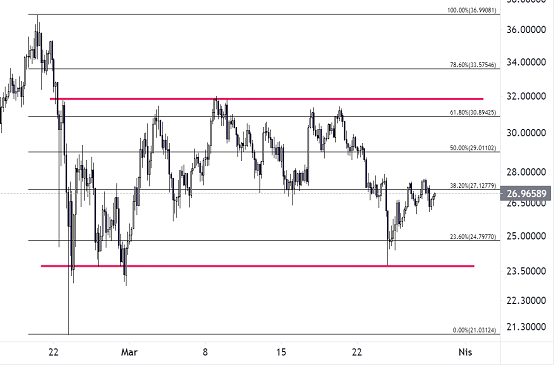 BAT is priced at $1.09 this morning. Although it finally made a technical rise to the $1.40 level, the change in the number of new and active accounts could not keep up with this increase. The share of the current supply at 1% addresses continues to decrease. While it is positive in terms of whale movements and the decrease in circulating supply is positive in terms of the course of BAT.

When the BAT/USD parity is technically analyzed, the descending triangle was broken and the biggest threat was eliminated. In the period when altcoins are active, there are favorable conditions for BAT. However, in the descending trend since $1.40, the TOBO outlook can start with the break of $1.15. Therefore, a break of $1.15 could bring the parity closer to the $1.30 levels on the upside. The view is horizontal but positive. 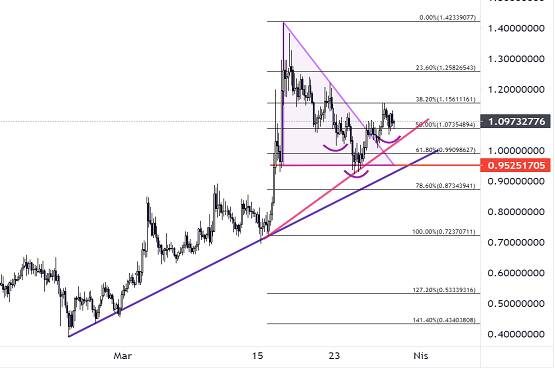