The US Securities and Exchange Commission (SEC) has begun evaluating WisdomTree's Bitcoin ETF proposal. With this development, WisdomTree became the second ETF to be evaluated by the SEC. The first proposal was made by VanEck and the decision is expected to come soon.

XRP Will Soon Partner With Wanchain

Wanchain CEO Jack Lu has announced that decentralized cross-chain bridges for XRP will be published on the mainnet. Thus, XRP tokens are now used in areas such as liquidity mining, yield farming, and take their place in DeFi platforms.

Another Decision in Favor of Ripple from the Court

After the SEC’s recent request for the breakdown of the personal spending of the Ripple founders, the court has made another ruling in favor of XRP and rejected the request of the SEC.

Ripple's CEO and chairman will present their request for the rejection of the XRP case on Monday, April 12th. A week later, on April 19, the lawyer defending XRP investors will present his views on the matter to the court. On the other hand, the date the SEC will present its claims to the court will be April 22th.

Bitcoin Considered as a Threat to Fiat Coins

A community of many intelligence agencies in the US has published a new report on digital currencies. In the report, it was stated that Bitcoin and other digital currencies threaten fiat monies such as dollar and euro.

A Billion Dollar Purchase from Grayscale

The digital asset management company Grayscale has announced that it purchased $1 billion of cryptocurrency in a 24-hour period on its official Twitter account. Accordingly, the company, which had $45.1 billion in assets the previous day, now has a total assets of $46.1 billion.

Bitcoin started to hold above 60 thousand after the $61,200 level it tested over the weekend. When the continuous increase in funding rates and the additions to the amount of BTC held in wallets are followed, we see that demand revives compared to last week. On the other hand, Grayscale's increase of 1.1 billion dollars in its funds indicates that the perception towards the sector is preserved. Last week, 2 points of our 15% premium expectation, which we referenced in the scissors analysis, has been taken and BTC is currently 12-13 points behind LTC and ETH. If we look at this calculation, this target, which corresponds to the middle band of the channel passing over the level of $66,600, continues.

When we consider the BTC/USD parity, the approach of the 7 and 30-day DEMA to the intersection may produce a new buy signal. Therefore, purchases can be accelerated if the zone above $60,000 becomes permanent. The flag formation on the other side confirms the $66,600 level as a continuation of the trend. The breakdown of the $59,140 and $61,800 zones, where the Fibo'78.6-100 zone is in BTC, may bring a rapid exit. 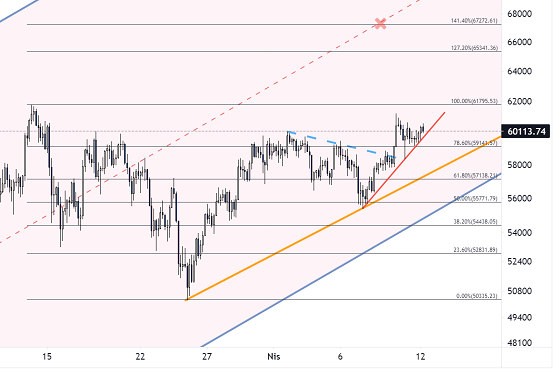 Ethereum broke a new record by testing the $2,200 level on Saturday, bringing its monthly return to 11%. Network fees (gas fees), one of the biggest problems of the network, dropped to the lowest level in 5 weeks. The Berlin hardfork, which is currently expected on April 14, is also expected to ease the network and direct demand to the ERC-20 network. While ETH staking continues in Ethereum 2.0 staking, on the other hand, ETH assets held in exchanges continue to decrease. Both situations seem positive in preventing the price volatility of ETH.

When we take the ETH/USD technically, the charts point to a correction of about $100, although the core part supports the upward trend. However, we do not expect any significant deterioration in the cruise as the mentioned figures are small in percentage. Especially if the $2,170 level is broken, this short correction scenario will end, so we are following a tight and unstable course for now. From this point of view, we can see that the movements accelerate if the $2,140 level is achieved with the $2,170 breakout that will be the decision point.

AVAX is pricing at $32.80 this morning, up 4% daily. Avalanche announced that it has completed its integration with the platform The Graph. Thus, developers will be able to verify their data on the chain without hosting a node to build high performance applications. On the other hand, after Avalanche's integration with a popular prediction platform, a volume of over $1 million has been reached.

If the AVAX/USD parity is technically taken into account, the parity, which continues its course in the mid-lower zone of the bullish channel, is priced slightly above the $32.40 level above the Fibo'38.20 slice. Supporting this level with closings above the $32.40 zone could lead to the target zone for the parity at $36.00, the mid-channel band. This means a 9% price increase on a daily basis. The cruise is positive. 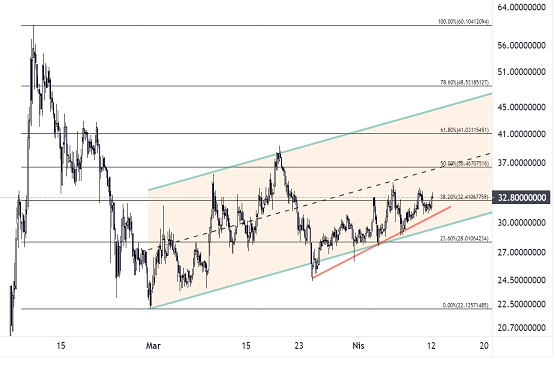 Ripple has been one of the cryptocurrencies that showed the most positive divergence in the last month, bringing its monthly return rate to 190%. When the SEC's request to view the personal spending breakdowns of Ripple's founders was rejected by the court, Ripple's second legal victory was declared, and XRP prices surged. On the other hand, XRP, which will provide passive returns on the DeFi side with the activation of cross-chain bridges in the Ripple network, is becoming more and more attractive for investors.

The XRP/USD parity has retreated by 1% this morning, pricing around $1.33. The flag formation target was completed with the parity testing the $1.50 zone, after which the parity was accompanied by some retracement. A new flag formation can be seen here, which could be a continuation signal of the upward trend. Indicators are close to the bottom zones in the 4-hour period. This suggests that the withdrawal may take some more, and then possible reactions may take place. However, decreases can be considered as buying opportunities. As long as it stays above $1.20, we can read the course positively. 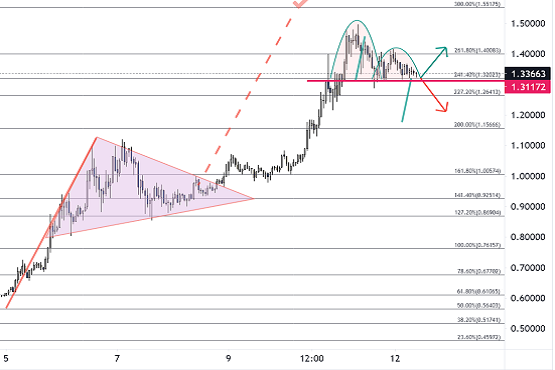 Litecoin was traded at $254 and above, up 15% on Saturday. Litecoin's market cap has thus increased, and its market cap dominance among its total cryptocurrencies has risen to 0.80%. Litecoin's weekly return has reached 18%.

The LTC/USD parity is priced at $257 in the morning, up 2% on a daily basis. This time, the $236 mid-channel level, where the parity had previously been pressured, was broken and the break was confirmed on the volume side. The subsequent 4-hour candlestick closes show that pricing is holding above this level. The $250 level at the Fibo'100 slice is the first support for the parity and is also an important level of Fibonacci. For this reason, for the parity that finds a response from the $250 and $244 supports, the upper channel of $288 may be among the short-medium term targets. 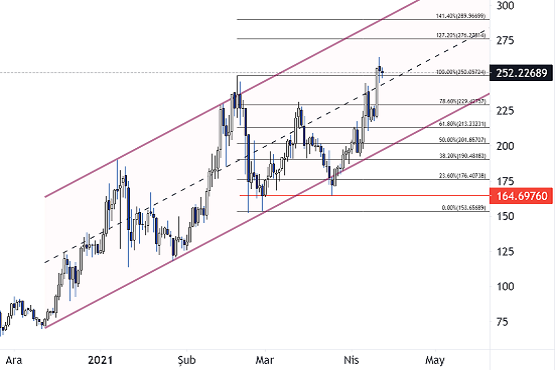 Chainlink, which caught a rapid price increase with the addition of Grayscale to the Large Cap Fund, is counting the days for the fund to be activated. When Grayscale purchases reopen, capital inflows to LINK can gain momentum.

If the LINK/USD parity is technically examined, the last slice of the Fibonacci correction for the parity, which continues to rise on the minor uptrend on March 24, is at $35.00, and for the parity holding on to its trend, we can expect a more active course with buyers above $35.00. Persistence above $30.00 means protection of the rise. The cruise is positive. We continue to maintain our $60.00 expectation for the medium to long term. 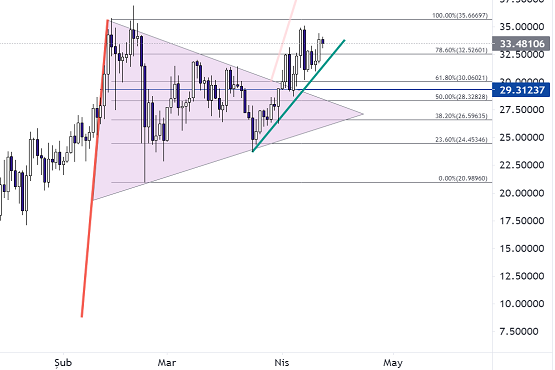 BAT is trading at $1.45 this morning. BAT is approaching our target of $1.80 after testing the $1.62 level, and there is a crossroads. Although it creates a double top formation first, there will be no confirmation until the $1.37 level is broken down. For this reason, the process of obtaining confirmation, which is the most basic rule sought in formations, continues. On the other hand, the price holding the upper band of the uptrend is getting support from the $1.45 level. For this reason, permanent moves above $1.45 will be able to eliminate the double top and will equalize the bearish scenario and raise the pointer again. 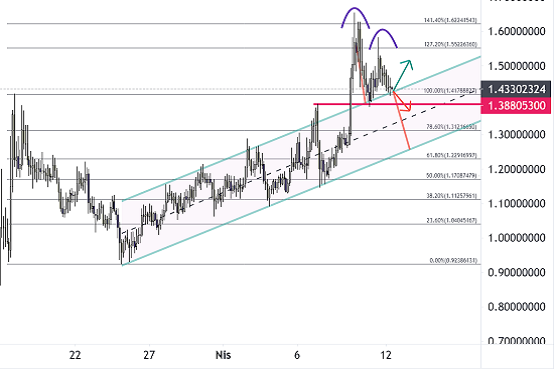