A Bitcoin Worth More Than A Kilo of Gold

Gold has become cheaper than Bitcoin, with 1 kilogram of gold, the largest asset in the world, with Bitcoin pricing at $ 57,000 and above, setting a new record.

Canada's first Bitcoin ETF attracted great interest by selling a total of over $ 100 million shares on the first day of its opening, and the total assets under management reached $ 421.8 million in two days.

Japan's giant financial firm SBI Holdings plans to set up a cryptocurrency startup and make cryptocurrencies one of the company's key earnings. Company CEO Kitao stated that the days when stocks and bonds were the only things people invested in are over and corporate interest will grow.

The car giant Tesla has already earned $ 1 billion with its $ 1.5 billion investment in BTC. In fact, it turned out that Bitcoin made more profits than the electric car sales the company carried out all year.

Microstrategy Expands BTC Investments
Microstrategy announced that the sales of the bonds are over and they will invest in Bitcoin with $ 1.05 billion in revenue. The company, which currently has 71,079 BTC assets, will receive an additional 19,000 BTC, which means it will increase its BTC assets by 26%.

Bitcoin is starting the new week at $ 56,000 with profit sales after hitting $ 58,000 over the weekend. Faced with 2.2% profit sales, the improvement in the number of active and new addresses did not support BTC prices. According to the chain data, the MVRV Z-Score (Market Value / Realized Value) value is in the red region, which we call high values ​​and is towards the 8 value. For this reason, the situation in chain data supports profit sales, but technically we are in an upward trend, it is necessary to design the trading strategy more actively.

When we consider BTC / USD technically, the bullish channel broke up at $ 55,000. Thus, this level of old resistance became the new support. In the daily period, the momentum keeps its uptrend and the buy signal on the MACD. That's why we're seeing profit sales, not trend reversal. The first uptrend is at $ 55,000 and the second minor trend is at $ 49,000. In case of a reaction from the supports in the withdrawals, the following stop loss and limit purchases may be the strategy in the foreground. 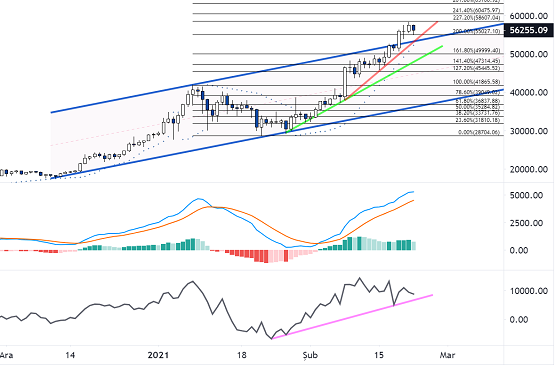 Ethereum surged to the $ 2040 levels over the weekend, crossing the $ 2000 level. Then, the appetite for profit taking over the market was also dominant in Ethereum, priced 10% below its peak. Ethereum-Bitcoin weekly and monthly spreads indicate that ETH remains discounted versus BTC. On the other hand, the volume passing in the Ethereum network is compatible with the price, but transaction fees and miner income may also reflect negatively on the network density on the other side.

When we consider the ETH / USD parity technically, it has completed the rising triangle formation in the bullish channel and at the beginning of January, approaching the $ 2050 levels. In its current movements, the middle band of the bullish channel is the support zone at $ 1800-1830. At the same time, in the 4-hour period, the oscillators have reached the oversold support zone in the $ 1800 region. There is no major support for Ethereum up to about $ 1680-1700 if the $ 1800 zone is stretched for Ethereum, where we expect reactions on this zone. 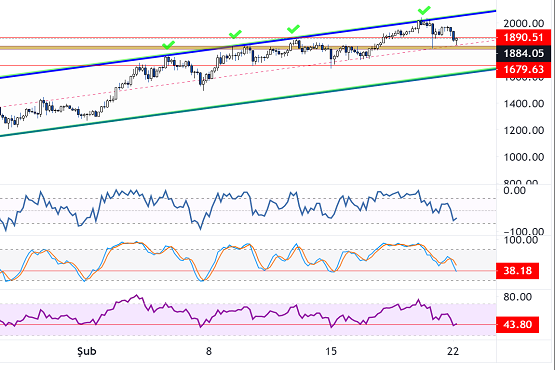 The AVAX / USD pair is pricing at $ 34.40, with a 5% retracement this morning. Although the cryptocurrency market is rising around Bitcoin in general, altcoins' returns have been growing on the positive side for the past week. On the AVAX side, it is seen that the top regions are rejecting earlier each time and bringing lower prices. Since the opening of the supply locks of AVAX on March 9, the formation of a kind of secondary public offering will increase the circulation of AVAX in the market, we can trigger sales and we can see the early pricing of this before March 9. The $ 32.60 level in the Fibo'61.80 tranche will be the first support zone for AVAX and then we will watch the $ 37.80 level in the Fibo'50 zone as the critical zone. For now, we observe horizontal and slow movements in the parity, where we follow horizontal movements between these two regions. This level will be expected to be exceeded in order to restrain sales pressures, but there is no trigger for now in terms of fundamental and technical aspects. 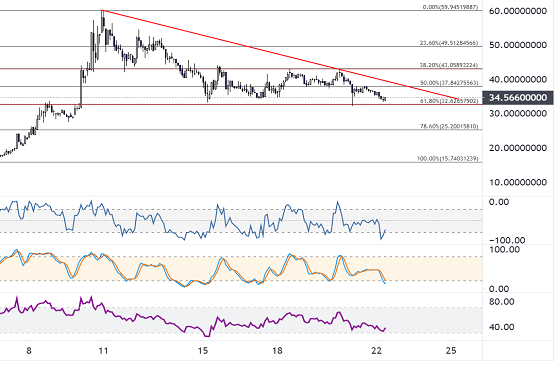 XRP will be one of the most talked about coins this morning. Today is the first hearing day of the incident, which came to court with the SEC's charges against Ripple company in late December. The most important decision to follow today will be whether to file a lawsuit against Ripple. We do not find the litigation negative for XRP. Because Ripple wants to defend its righteousness and eliminate the issue of "being evaluated as an asset" by not going to a pre-trial agreement with the SEC. Also, if the court is opened today and a cover letter is written in line with Ripple's request, it will again be positive for Ripple. We recommend that you check out the video on Ripple on our YouTube account.

The XRP / USD pair may be subject to very active and non-directional pricing today due to the lawsuit. The previous highs of $ 0.65 were tested this morning. XRP, which had 12% sales in the early hours of the morning, suddenly went up 16%. In XRP, which supports the $ 0.50 level and moves above this point, investors should be careful against volatility today. Directionlessness and high volatility may prevail rather than technical and fundamental directional movements. The outlook is volatile but in an uptrend. 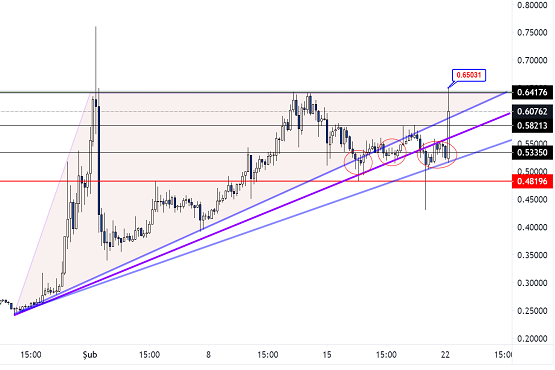 Litecoin is pricing around $ 222 this morning, with a drawback of close to 2%. A 10% retracement is observed after the record high of $ 247, but this may be a preliminary for healthier gains rather than negative. In monthly returns, Bitcoin is on the positive side with 75%, while Litecoin is on the positive side with 62% and there is a 13 point difference of scissors. In this case, for the medium term, this return difference can be expected to close in favor of Litecoin, but technical indicators signal that some retracement may be seen.

On a technical view, the pair is above the tough support of $ 222 and the price below $ 222 will be decisive, even though the OBO (Head Shoulders Shoulder) pattern on the hourly chart signals a return to the negative side. The purchase volume below this level may be lost, bringing the $ 205 zone to the agenda in prices. On the other hand, the pair started to give a weaker signal as it remained below the 30-day moving average. Although the outlook is not positive in the short term, it continues to remain above the upward trend in the medium-long term. 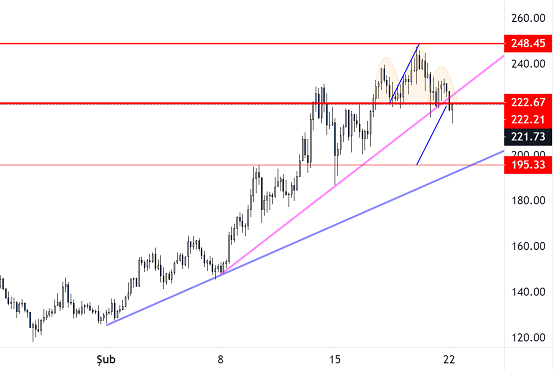 Chainlink is pricing around $ 32.50 with a 5% retracement this morning. He set a new record for his household when he tested $ 37.00 on Saturday, February 20. The growth of institutional interest around Bitcoin allows the market to grow around Bitcoin and Bitcoin investors, and altcoins have not yet achieved the desired pricing. But Chainlink maintains its stability by not delaying its rise. On the other hand, LINK's percentage of total smart contracts has increased, showing that the demand for LINK remains alive.

LINK / USD pair holds above $ 32.50 resistance zone. Although there is a 13% retracement after the record level from $ 37.00, the pair continues to move within the bullish channel. However, this bullish channel passes through the levels of $ 30.20 and moves towards here in the pair, where oscillators are moving downward, signal that there may be a 3% profit realization. The view is horizontal but in the ascension channel. 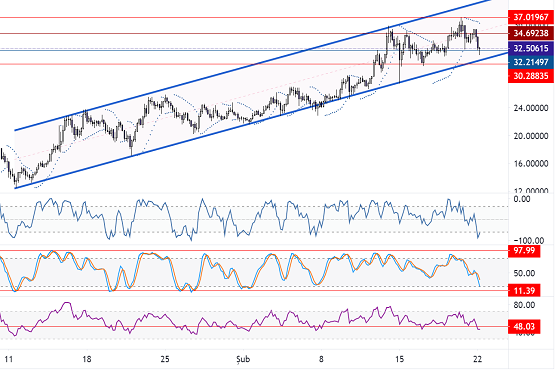 The BAT / USD parity is forming a triangle outlook in the four-hour period with gradually decreasing peaks and also recovering lows. Although this tightness signals that the pair will create an accelerated movement on the positive or negative side, there is uncertainty about the direction. However, the secondary trend is in the upward direction, the minor trend is in the downward direction. Therefore, breaks in the secondary trend direction seem more likely. Technically, prices at the $ 0.5850 level correspond to the Fibo'50 tranche.

Therefore, the rise or fall around this level can be rapid. The use of an oscillator will be more appropriate due to the horizontality that occurs in the triangle appearance. Looking at the oscillators in the 4-hour period, the RSI and Williams% R have a positive outlook, while Stochastic is showing a negative signal with the downside zone and maturity lines. The $ 0.55 and $ 0.51 levels are major support for BAT, which is dominated by instability. 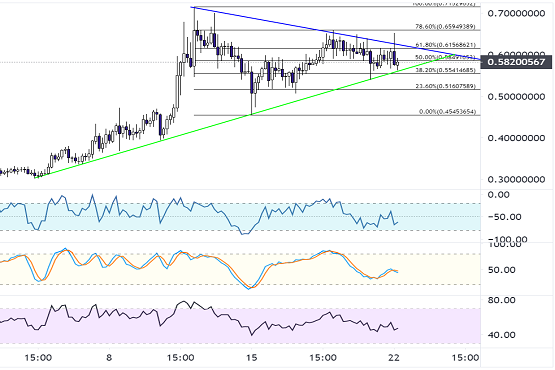