A number of leading Ethereum-based DeFi protocols, including Aave, recently announced a $100 million DeFi initiative with Celo, a mobile platform for financial dApps.

As of July 16, 2021, crypto and blockchain job ads accounted for the highest proportion of software development-related ads at 29.7%.

The U.S. Securities and Exchange Commission is seeking video and audio recordings of Ripple's company meetings to support its claim that XRP was a securities that violated the law, according to a new legal filing.

Bitcoin will become a legal tender in El Salvador in seven days, along with the US dollar. The government of El Salvador has released a video explaining what to expect when the Bitcoin law comes into force.

The announcement of a new incentive program gave a big boost to Fantom's token FTM, causing its price to rise sharply.

Polkadot-backed Defi lending and equity protocol Parallel Finance announced on August 30th that it had raised $22 million in a Series A funding round worth $150 million.

126 Million XRP Transferred by Ripple to ODL Corridors and Exchanges

According to the latest blockchain data, more than 126 million XRP tokens were transferred by ripple distributed ledger technology provider together with a cryptocurrency exchange yesterday.

Bitcoin, which has a horizontal price movement in the morning, is priced at $47,160.

When we consider BTC/USDT parity in technical terms, Bitcoin, which is negatively divergent according to the market as a whole, is priced below its current downward trend as of August 23rd. There is a pricing that is stuck between this trend and the 200-day moving average of $46,000. When we examine it in a 4-hour period, MACD continues to sell. MACD also has a downward trend as of July 26. For BTC, rapid movements in the direction of rise can be expected with the breakdown of this trend. We'll be watching the 200-day moving average for retreats, with upward breakdowns of $50,500-$52,000 important. 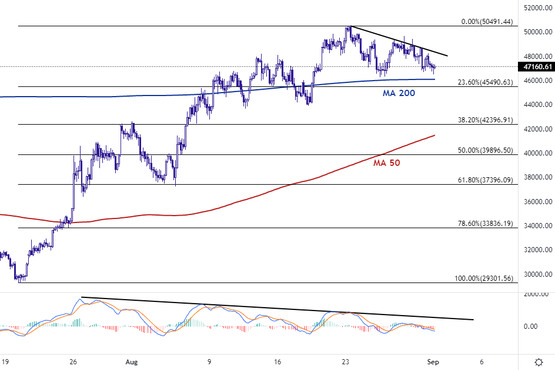 Ethereum, which gained about 0.70 percent in the morning, is priced at $3446.16. According to Bitcoin, this remains the case for ETH, which has recently experienced positive divergence. ETH, which has gained about 12 percent against BTC in the last 3 days, is seen as being able to attract some of its market share. Also in the last 3 days, ETH's market domination increased by about 7.5 percent to 19.43 percent.

When we consider the ETH/USDT parity in technical terms, ETH, which has a horizontal/jammed price movement in the band of $3350 to $3000 in the approximately 24-day period that we mentioned in the bulletin yesterday, yesterday broke this jamming area upwards with trading volume well above the average for the last 20 days and closed its daily close above the resistance zone. ETH, which rejected the resistance zone it broke with the beginning of the day from above, rose again and made this level support. Unless ETH closes again daily below $3350, our next price target is $3840. 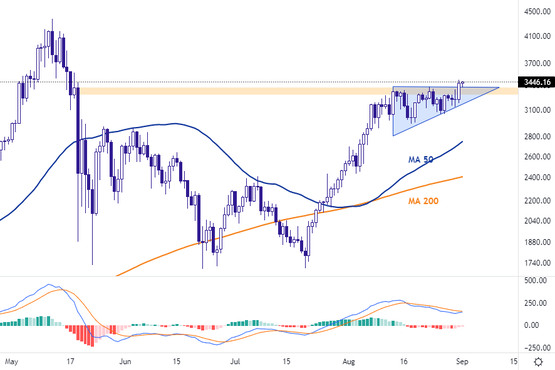 The AVAX, which dominates the horizontal price movement in the morning, is priced at $39.82. When we examine the AVAX/USDT parity technically, AVAX is about 35.5 percent withdrawn from its peak level of $59, and the first Fibonacci correction level is seen as having support from the level of $38.16, which corresponds to the 23.60% tranche. Although MACD has signaled sell over the daily period, the 50-day moving average is expected to break the 200-day moving average upwards over the next few days. If AVAX can maintain on the Fibo'23.60 tranche, the first short-term target price is $44.5, which coincides with its downward trend and is a significant resistance level in the horizontal. 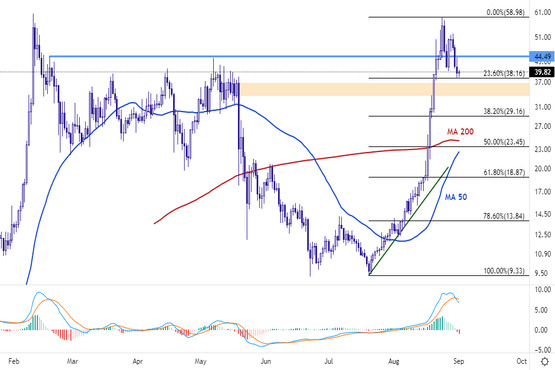 Ripple, which dominates the horizontal price movement in the morning, is priced at $1.1862. The U.S. Securities and Exchange Commission is seeking video and audio recordings of Ripple's company meetings to support its claim that XRP is a securities that violates the law, according to a new legal filing, according to an earlier-day news release yesterday. However, there was another positive news flow for Ripple yesterday. According to the latest blockchain data, more than 126 million XRP were transferred to ODL corridors and exchanges by ripple distributed ledger technology provider together with a crypto exchange yesterday.

When we consider the XRP/USDT parity technically, XRP, which rejected its downward trend as of August 15th at $1.24 yesterday, also received a reaction from this level, which corresponds to the Fibo'50 slice. The 50-day moving average for XRP, which continues to sell on MACD during the daily period, is about to create a "golden cross" by cutting the 200-day moving average upwards. With the upward breakdown of the downward trend for XRP, it is expected that rises towards our first target level of $1.41 will begin. 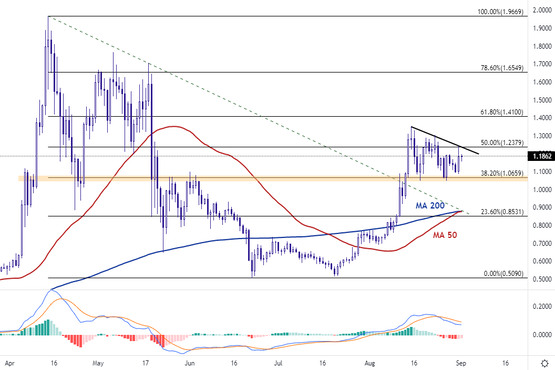 LTC, which gained about 0.40 percent in the morning, is priced at $172.0. When we consider the LTC/USDT pair technically, although the LTC price continued to recover from yesterday, ltc, which was reacted to yesterday at 175.9 dollars, which corresponds to Fibo'38.20, closed below this level. In LTC, which continues to move prices between its 50-day moving average and its 200-day moving average, if the Fibo'38.20 slice breaks upwards, the first level we will follow is $193.7, which corresponds to the 200-day moving average. We think that the sharp rises will be experienced with persistence above the 200-day average. 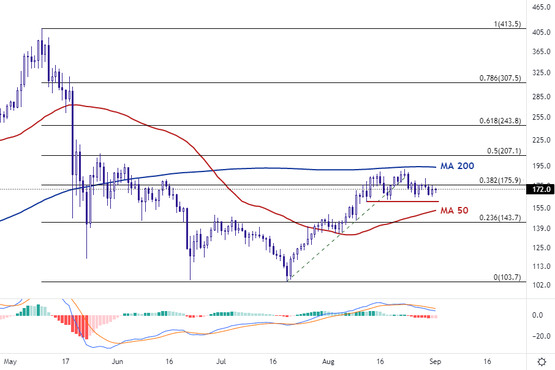 LINK, which gained about 1.24 percent in the morning, is priced at $27.02. When we examine the LINK/USDT parity technically, LINK, which has repeatedly rejected the significant resistance level at $26.67, yesterday broke this resistance level upwards with above-average volume yesterday and closed on it daily. When we examine it in the daily period, it appears that the stoics signaled buy from levels close to the oversold zone. The $28 level, which corresponds to the 200-day moving average, which is important for the acceleration of price movement on the upward side for LINK, is read as the next critical resistance level we will follow. 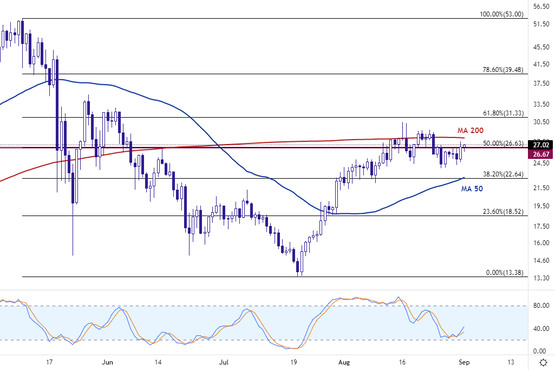 BAT, which gained about 1.08 percent in the morning, is priced at $0.823. When we consider BAT/USDT parity in technical terms, BAT, which is priced above the rising major trend that passed the July 20 low and the August 19 low, rejected its rising trend at $0.798 last night. BAT, which has found support from its trend with rejection, is rising towards $0.842 in the morning, which is equivalent to its 200-day average. If this level breaks upwards, the first short-term price target for BAT is read as the previous high of $0.908. 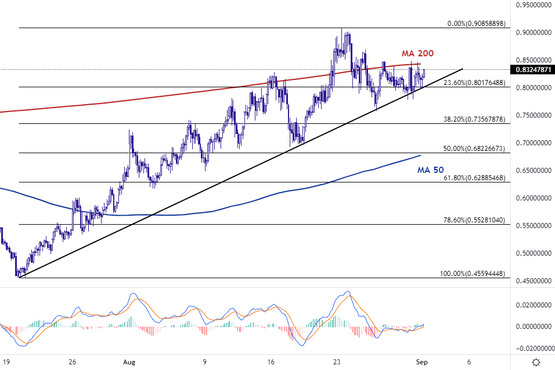