The Aave DAO conducted a 3-day vote to determine whether to create the GHO stablecoin that is planned to be issued. It was announced that the nearly final vote was positive and 501,000 AAVE owners voted in the affirmative. The GHO is planned to function as an over-collateralized stablecoin similar to MakerDAO's DAI.

Giant financial company Schwab has released its first crypto-asset-linked ETF. On July 29, Schwab announced that the ETF would be listed on the NYSE under the name Crypto Thematic ETF (STCE). The ETF will go on sale from August 4. The ETF will not be directly dependent on crypto asset prices and will not contain crypto assets. The product will include companies that are more connected to cryptocurrency.

In Argentina, a club was on the agenda to sign a domestic player with a crypto asset transfer. Sao Paulo, one of the biggest football clubs in Brazil, also announced the purchase of a player with a cryptocurrency transfer. In the transfer with the help of USDC, it was announced that Argentina's Banfield team paid between $ 6-8 million in exchange for Giuliani Galoppo.

Mercedes-Benz and Polygon have reached an agreement on the development of a data sharing platform. Daimler South East Asia, a subsidiary of the Mercedes-Benz Group, announced the work of a data-sharing network to be established with blockchain technology using Polygon.

According to data shared with Dogecoin, the number of addresses exchanged for the coin has increased by 256% in the last two months. Its daily average increased from 14,000 to 38,000. Dogecoin, which has not shown the same growth in terms of price and market value, has seen a 25% decrease in market value and close to 20% in price in 2 months.

With the data announced in the US last week, there was a significant rise in the cryptocurrency market. First of all, the fact that the interest rate hike was 75 bp brought about the rise of the markets as the Fed chose the softer option in its interest rate policies and then the balance sheets and earnings of giant companies came at or above the expectation level. Of course, this rise will be temporarily accepted in these periods when the raw material crisis and the Russian-Ukrainian war continue. However, it is also known that many data and technical analysis in Bitcoin accept 20 levels as bottoms.

Bitcoin is pricing in at $23,390 today, with a 0.37% gain in value in the morning. Following its sudden rise to 24,000 levels, BTC seemed to form a small channel as it continued its horizontal movement. However, at the end of the 3-day horizontal movement, BTC, which fell below the channel by eating a small selling pressure, fell to $ 23,200 levels. When we look at the monthly close, BTC, which closed the month with a green bar after a 4-month break, did not break the upward trend that has formed since 2019 and turned down. 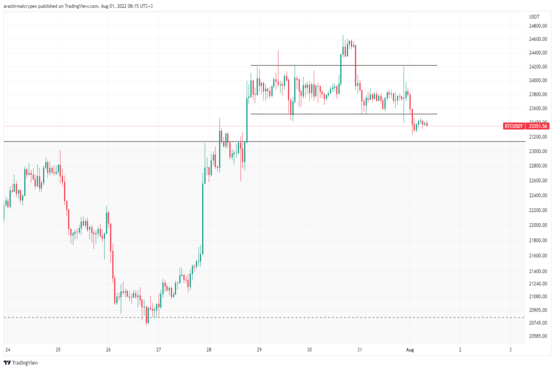 Today, ETH, which gained 0.7% in the morning hours, is priced at $ 1689. The rise of up to 70% in Ethereum since July 13 has carried the entire crypto market up. When we look at the daily chart, Ethereum, which has tested the $1010 level down many times, has made a significant rise with the merger news that came after its last test. Ethereum, which reached the 1700-1800 dollar band in mid-June, where it could not break down for a long time, will work to make an upward breakdown this time. ETH Founder Vitalik Buterin also gave a signal to the rise by saying that ETH pricing for merge has not yet taken place.

AVAX, which has gained 1.64% as of the morning hours, is priced at $ 24.10. AVAX is in a falling triangle pattern on the daily chart. AVAX, which is currently at the resistance level of the pattern it has been in since April, may be able to break down in these days when risk appetite has increased. In case of an upside break of this level in AVAX, we can say that the next target will be at the $ 30 level. 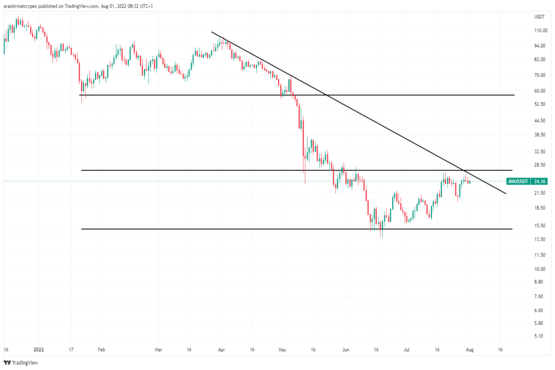 XRP, which gained 0.76% in the morning, is priced at $ 0.3820. When we look at the Ripple 4-hour chart, XRP, which we see that it is in the ascending triangle pattern, has not been able to break for a long time even though it has repeatedly tried the support and resistance levels. However, with the positive data from the announced reports, it made an upward breakdown on Saturday and progressed to 0.41 levels. Ripple, which then returned to the support zone at 0.38, needs to be able to stay above these levels. 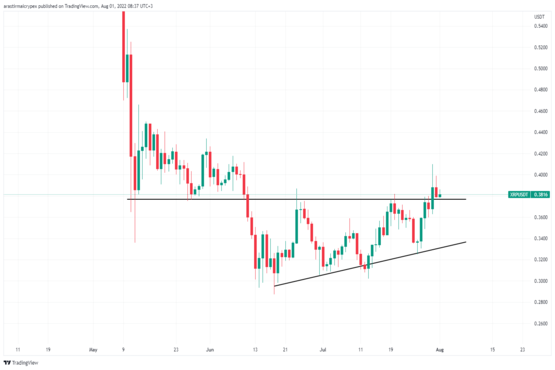 LTC is trading at $60.12, up 0.64% as of morning hours. LTC managed to break the channel it was in with the acquisition of the market upwards after a long time. It then formed a descending triangle formation on the channel. LTC, which has repeatedly tested the pattern upwards-downwards, broke the support point at $ 60.50 with the absence of an upside breakdown and returned to the channel. LTC, which is currently at $ 60 levels and is trying to break the channel upper band, is unlikely to return to $ 50 levels if it cannot break out. 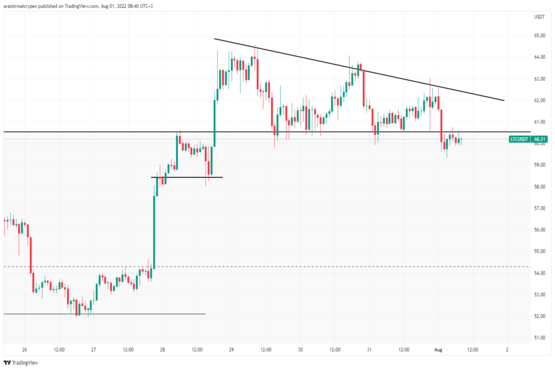 LINK is up 1.32% today at $7,752. When we look at the daily chart, LINK is trying to stay above support after the channel breakdown. Although it rose to $ 8 levels after the breakout took place, LINK, which constantly returned to the support at 7.6, needs to continue its rise with a target of 9.65 to get rid of the channel movement and continue the rise. 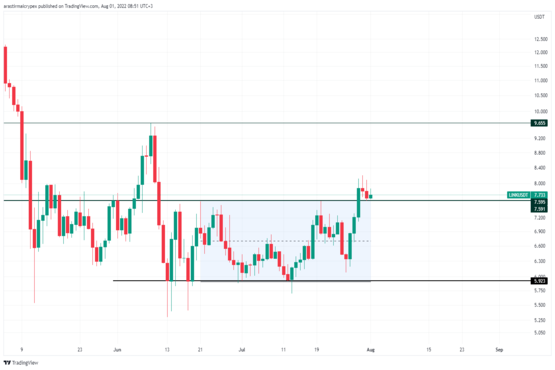 BAT is trading at $0.4113, up 3.08% as of morning hours. BAT shows a descending triangular motion. It has repeatedly tested its movement, as well as the middle band of the channel it has been in for a long time, 0.3980, and then made a comeback. We can say that the primary target in the upward movement in the BAT is the upward breakdown of the 0.4255 level, which is the upper band of the descending triangle, and that in a possible decline, the downward breakdown of 0.40 levels should be considered. 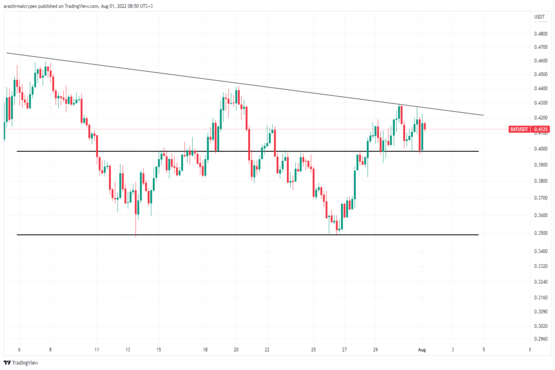