Elon Musk responded to the comments written under his tweets for Dogecoin and stated that if he issued his own coin one day, his name would be "MarsCoin". Then, a coin named Marscoin, which was produced in 2013 and did not have any activity, increased by over 500%.

13% of Passengers Pay with BTC
British airline PrivateFly announced that it earns 19% of its annual revenue from Bitcoin. According to the company's statements, 13% of the flight payments in January were made in Bitcoin. The most striking thing was that the company kept the Bitcoin paid in the fund instead of converting it into cash.

Increasing Interest of Mexican Companies in Bitcoin
According to the news of El Economista, PwC's Senior Partner, Mauricio 22Hurtado, announced that after Tesla's purchase of $ 1.5 billion in Bitcoin, Mexican companies' interest in Bitcoin increased rapidly, and many corporate companies invested in BTC to prevent competition.

Ripple and SEC "Not Yet" Reach

Although the first hearing of 2 was on February 22, the announcement made a week before the trial announced that no agreement has been made between the parties yet. One of the highlights in this joint statement to the federal court was the failure to reach an agreement with the old SEC administration, not the new one.

Bitcoin tested the $ 50,650 level with the news-based rise yesterday, climbing to an all-time high (ATH), while it is pricing at $ 50,500 this morning with over 2% buyers. While the market had to make a correction in the last two weeks, the news pushed the market upwards. First was the Tesla news, and secondly, the news that MicroStrategy will issue a $ 600 million bond to buy BTC. The developments in the number of new and active addresses are horizontal for now, on the other hand, the rise in average transaction fees as we stated in our yesterday's bulletin; While BTC does not support a substantial exit in the bullish direction, a more horizontal course outlook prevails. Nevertheless, it may be more appropriate to settle in lower supports in response to rapid price changes, and to go framed with a trading strategy with limited buy and stop loss against possible turns.

When we consider BTC / USD technically, the rising wedge formation continues with the rising trend. If this image, which indicates some correction, is realized, it supports possible movements up to $ 44,000-45,000, or rather retracements towards the main trend. But if the above $ 51,000 level breaks, the wedge formation will end. Therefore, supports in the range of $ 49,800-50,500 can be evaluated for short-term trading. Support-resistance levels should be followed. 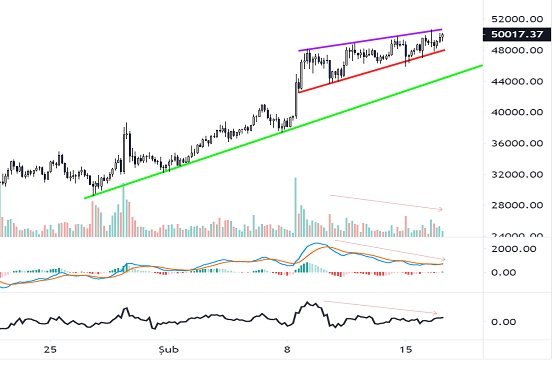 Ethereum is still half a point weak in mid-week transactions despite a 2% rise in Bitcoin. Total transaction volume also declined slightly, due to the rise in transaction fees on the Ethereum network. This explains the idle situation in Ethereum prices in recent days. However, Ethereum was 11 points behind Bitcoin in weekly returns, according to the scissors analysis. 14 points behind LINK. While ETH and LINK are at par in monthly returns, we find it logical to have the leading role in Bitcoin for now, as Ethereum is 4 points ahead of BTC.

When we consider the ETH / USD technically, the wedge formation correction is complete. ETH in the bullish channel held the $ 1740 level where the middle band crossed. He is trying to react from this region as well. The MACD has been showing intersection and volume on the sales side in recent days. The image in the MACD is also in recovery. Therefore, holding the $ 1740 level may allow retesting of the $ 2000 level in ETH / USD. The look is horizontal and in an effort to recover. 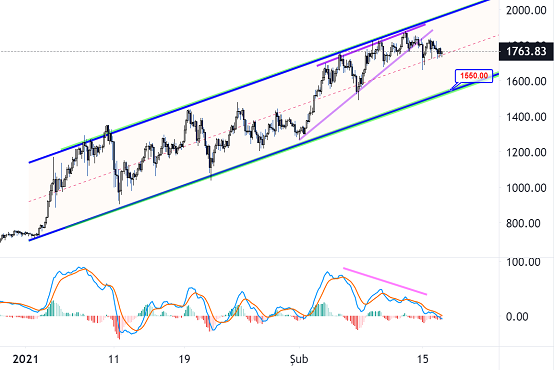 AVAX is experiencing a 4% retracement this morning and pricing is formed around $ 34.80. AVAX, which has maintained its weak course for the last week, is one of the most affected by the negative situation in the market after its rapid rise in the second week of February. Now it is pricing 40% away from its record. General outlook not being positive yet, and the technical problems it experienced in itself, paused the expectations for the Avalanche platform a little, and much of the rise was absorbed. This situation experienced for the short term still does not change the fact that AVAX is priced below its potential. Pangolin used on the Avalanche platform broke its own record, with a volume of $ 50 million and liquidity of $ 61 million.

When the AVAX / USD parity is examined technically, even if the upper band of the bearish channel created in a 2-hour period is tested, it is seen that the price candles weaken below this level and cannot exceed it. $ 35.00 dollars should be followed during the day. If the upward breakdown does not occur, the downward position can be maintained for a while. Since the image is more horizontal in the short term, the oscillators used are below resistance levels. In order for the resistance zones to be overcome and give an upward signal, the increase must be volume approved. This will be in parallel with the increase in buying appetite and the perception of opportunity in low pricing. 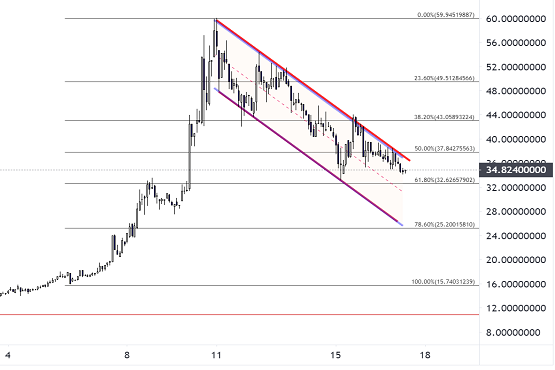 Ripple is down 1% this morning, with prices around $ 0.5100. The ongoing litigation process in the macro part may create volatility on prices, so positions where fundamental analysis is predominant in the following process can create a healthier trading strategy for XRP. In the US Federal Courts, the parties come together one week before the case and try to reach an agreement and it is determined whether a settlement will occur before the court. In the report submitted by the SEC and Ripple to the court, it was stated that the settlement has not been realized yet. Although this partially negative news creates a positive perception for some XRP investors, it is possible to see sales pressures or directionless and uncertain movements that occur as critical days approach in the general view.

The XRP / USD pair broke the 20-day uptrend downwards, with both the downward movement of the market in the last few days and the transparency of the case in the main part. Prices, which have been weakening for the last few days, have created a minor downward trend. In case of continued weakness in the pair, the next support level is at $ 0.4800. In order to start a positive course, the resistance of 0.5200 $, which is the upper band of the channel, must be broken. The minor declining channel that has formed will continue unless the $ 0.5330 level is broken upwards and there may be returns from here. The view is horizontal. 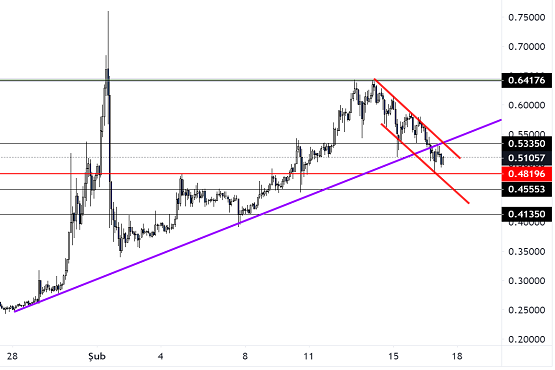 The LTC / USD pair is pricing at $ 208 this morning, down 0.8%. Litecoin founder Charlie Lee drew attention with his recent statements. Lee said he is very hopeful and excited about the upcoming MimbleWimble update that will provide privacy benefits. The market has not yet priced the update advantages on the Litecoin side, but positive expectations regarding the potential of Litecoin remain. The first code for MimbleWimble's integration with the main chain will be completed on March 15th.

When we look at the LTC / USD parity technically, the pricing on the uptrend that started on February 8 continues, but there is also a minor descending trend formed with February 14. This descending trend, which is more clearly seen on the hourly chart, has caused a squeeze on the main trend with the weakness in the price peaks. We need to see 4-hour candlesticks above $ 210 to avoid selling pressure on Litecoin. Otherwise, withdrawals for Litecoin at pricing of $ 210 and below may gain momentum 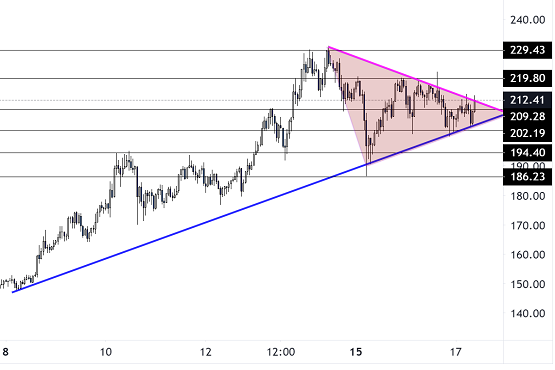 Chainlink has been one of the least affected cryptocurrencies so far from this pullback in the market. The bullish channel created on January 11 continues to rise at its borders, but the recovery movements in altcoins also created a weaker outlook for LINK. It is also possible that LINK, the DeFi coin with the largest market value, was adversely affected by the withdrawal of up to $ 38 billion in value locked in DeFi. 5% remained on the negative side with today's pullback in weekly yields. But monthly returns are 40% positive. Net Flow, one of the on chain data, fell to its lowest level in the last 3 months. This data belonging to the previous day indicates that the sales of LINK in the stock markets have not been so intense for 3 months.

Although the LINK / USD pair is in the bullish channel in the technical view, there is a 15% retracement after testing the upper band of the channel at $ 35.75. This resulted in a double top formation in the pair and the downside break of the $ 30.80 neckline gave confirmation for the formation. The target level of the double top formation is $ 28.00 and below. When the indicators are examined, there is a negative outlook for the 4-hour period in the MACD, and the histograms are on the negative side. Momentum is weak. In case of a reaction from the $ 30.50 level, a move up to $ 33.00 can be observed. Therefore, the day's major level will be $ 30.50. 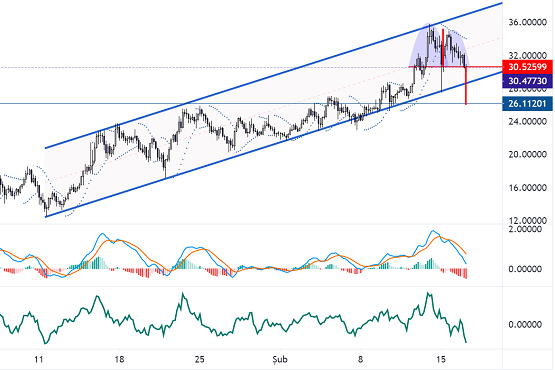 The BAT / USD pair is retracing close to 4% this morning and pricing is below the $ 0.5400 level. Interest in the browser Brave created on Basic Attention Token and the number of users are gradually increasing, thus preserving its potential in the macro part. Increasing transaction volumes and wallet numbers in a short time also made BAT attract the attention of investors. However, the fact that the general market was with sellers caused losses on the BAT side as well. Price candles that close above the $ 0.5000 zone and below the downtrend may create re-tightening, which may be the initial steps for accelerated movements. But for now, the outlook is weak and the $ 0.5100 support level in the Fibo'61.80 zone will follow. 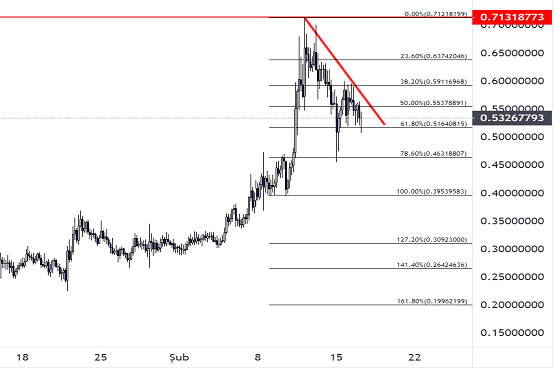