The cloud computing platform Amazon Web Services, another pillar of the giant technology company Amazon, announced that Ethereum is now available within the Amazon Managed Blockchain service. Users can now create Ethereum nodes on the platform and join the Ethereum network.

Mexico to Use Avalanche Blockchain

Mexico's Quintana Roo State Congress was the first national convention to use Avalanche technology for digital certification of legal documents operating through official correspondence and a file management system.

The Stellar (XLM) team officially unveiled the Horizon 2.0 update. The new version of Stellar Core, called Captive Core, will be much more memory efficient. Additionally, users will be able to track actions on the network, send new transactions, and explore the blockchain.

In the question and answer section made on the official website of the U.S. Tax Office, it is stated that cryptocurrency investors are not obliged to report digital assets if they invest in fiat money once a year, but if there is another transaction other than purchasing cryptocurrency once throughout the year, it should be reported and notified. were.

Cryptocurrencies One of SEC's Priorities

The U.S. Securities and Exchange Commission (SEC) has announced on its official site that financial issues, including cryptocurrencies, will be the priority issues this year. In addition, the SEC will check the security of client assets and funds, whether they are operating in accordance with the rule of digital asset companies.

Ripple is publicly traded, providing Central Banks a secure, controlled and flexible solution for the issuance and management of digital currencies; It is testing a custom version of the open source XRP Ledger. The new version, developed according to the statements made by the company, will create a bridge between different currencies and assets such as XRP will be released.

Ripple Co-Founder Chris Larsen stated that Ripple company's headquarters will remain in San Francisco. Larsen added that they are deeply connected to San Francisco and that the city will be the best hub for Ripple.

Crypto Payments Will Be Accepted for Used Vehicles

Quebec-based vehicle store HGreg, which has thirty branches in North America, announced that it will accept cryptocurrency payments for new and used vehicles starting this month.

US bond yields pulled the figures down. Bitcoin is trading at $ 49,750 this morning. The interest-BTC relationship, which is one of the most important indicators of Bitcoin's institutionalization, continues. Short-term bond yields, which are on the left side of the yield curve where US bonds are located, have been on the rise for the last two days. Therefore, the speech of Fed Chairman Powell at 20:00 in the evening will be important in terms of the course of bond interest and the cryptocurrency it affects. Bitcoin's volatility continues to decline. This may prolong the maturity of strategies.

When we consider BTC / USD technically, the DEMA (exponential average) for weekly and monthly periods passes between $ 48,800 and $ 52,000 and plots the horizontal band. The Fibo'38.2 retracement point is also past the $ 48,830 level. Although there is a reaction from this region in the hourly period, the negative atmosphere caused by the global pressure is still effective. However, the main trend is up since the $ 43,000 zone. The $ 48,800 level should be the last support for the continuation of the uptrend that turns into a channel move. 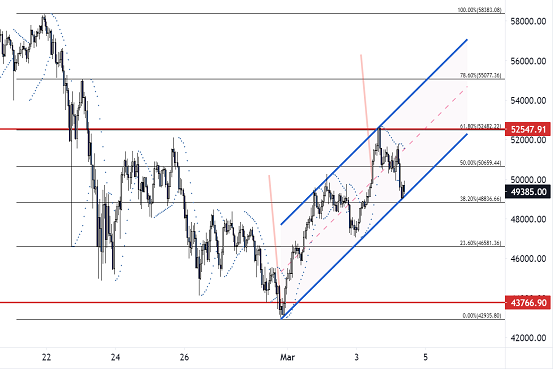 Ethereum is trading at $ 1550 this morning. There has been a slight increase in the number of balanced wallets and new Ethereum accounts in the last 24 hours. In addition, there is a 10% increase in the amount of Ethereum withdrawn from exchanges. On the other hand, there is no network fee that can affect the ETH value for now. In Ethereum, which is experiencing a decline parallel to market movements in general view, we can call this a short-term correction.

When we consider ETH / USD technically, we can see that Fibonacci, which we plotted between the old peak 1419 and the bottom $ 80, is our long-term guide, while we draw horizontally between 1970 and $ 1419. At price levels near the support levels, the major resistance will be $ 1580. This is both the closing place of the previous bar on the weekly chart, and the neck level that must break in order for the TOBO formation to occur in the daily period. The view is horizontal, followed by Fed Chairman Powell's speeches in the evening. 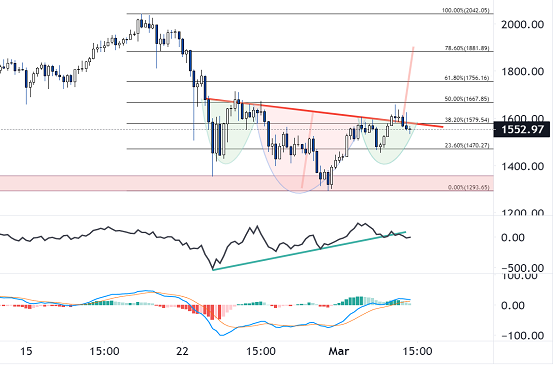 The AVAX / USD pair is priced at $ 27.20 with a horizontal change in the morning. It is less than five days for the second unlocking. Within the scope of the opening of the first supply lock on December 8, 2020, there were 20% losses on the AVAX side. Therefore, risks should continue to be considered for investors. On the other hand, a congress state of Mexico announced that it will use the Avalanche blockchain. Thus, the Avalanche platform will be preferred for legal documents and this type of cooperation can enable AVAX to be evaluated by other official institutions.

When the AVAX / USD parity is analyzed technically, it is seen that pricing continues its course below $ 31.00 in the Fibo'23.60 retracement zone. Although this place has been tested before, it has seen profit sales and created resistance. Therefore, the $ 31.00 zone creates a weakness for upward prices. On the other hand, if the prices recovered at the nearest $ 22.10 level and the intermediate support at $ 26.20, a TOBO formation may occur and if our current major resistance level of $ 31.00 is broken, it can move towards $ 37.9 levels by receiving a confirmation. In the current view, the movements are in clinging and horizontality. 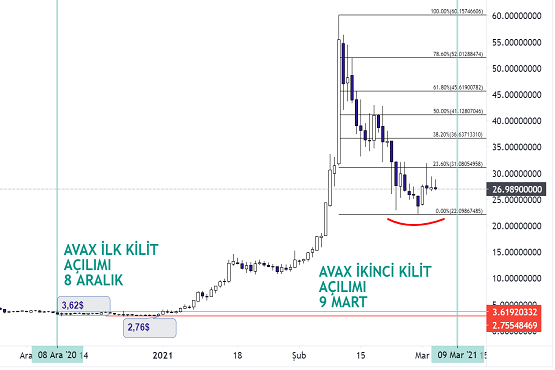 While many central banks are expected to issue a digital currency conjugated to their price coins in the near future, Ripple has taken another strategic step in this regard. Publishing a comprehensive report, the company introduced a special edition of XRP Ledger. More transaction confidentiality and more controllability are among the promises of the new version. Thus, this initiative, which will be on the radar of central banks, is in line with the past statements of the Ripple administration. The company has previously stated that it wants to create a platform to be used for CBDCs. On the other hand, according to the current statements of Ripple executives, he stated that the center in San Francisco could be moved and deployed to many other crypto-friendly countries and that it received strong support from other countries. It has now been announced that the company headquarters will continue to be located in San Francisco.

The XRP / USD pair is pricing in the $ 0.44 region this morning with a negative price movement of 1.3%. The horizontality between $ 0.40-0.46 is not left behind yet. The $ 0.44 zone has been tested and rejected many times by price candles, leaving XRP weak. Looking at the weekly yield spread between XLM and XRP, which are closely correlated, percent convergence points to the $ 0.48 region for XRP. Currently the initial support zone of $ 0.41. The course is horizontal but positive for now. Withdrawals can be considered as an opportunity. 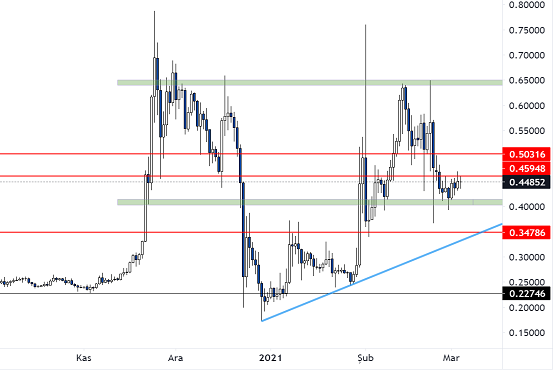 The LTC / USD pair is following a horizontal motion this morning and its current price is $ 186. We analyzed the numerical values ​​of the monthly Grayscale demand on Litecoin in our bulletin published the previous day. In the last 24-hour change, it is seen that while there are sales on the BTC and ETH side, 1500 purchases were made on the LTC side. Volumetrically, the impact cannot be expected to be large, but an institutional value and accredited investors like Grayscale represent the interest on the Litecoin side. On the other hand, pricing was very slow compared to Bitcoin, and therefore their correlations fell to 0.86. It can be expected that the monthly scissors (10%) formed will converge to Bitcoin and be priced positively on the LTC side.

When the LTC / USD parity is analyzed technically, it is seen that the major upward trend continues. However, when the 4-hour chart is examined, it draws attention with its horizontal appearance in the short-medium term and the reactions are weak. But in the $ 183 support zone, oscillators are pointing to the end of the correction, and they are also on the support zone. Stochastic maturity lines are still in the reaction zone, though still showing weak signals. 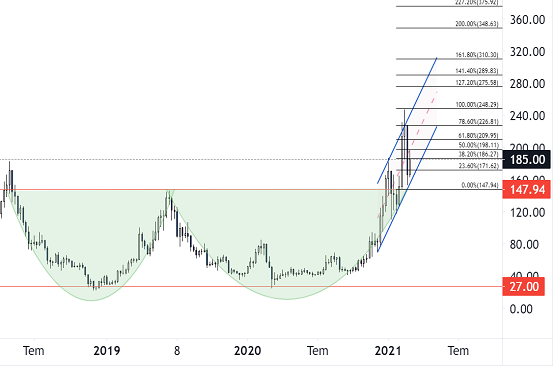 Chainlink is pricing around $ 29.50 with a 1% retracement against the dollar this morning. New Jersey-based financial institution BlockFi announced that they will launch LINK, the product of the Chainlink network. Thus, investors who have LINK in some of their portfolios will be able to earn interest income or the platform can be used to store digital assets. Chainlink, which is a pioneer in terms of annual returns, will provide both a return on pricing against dollars and will provide interest income through staking, just like DeFi platforms. This move of BlockFi was carried out in line with the demand of investors, according to the statements made by the company. If we examine the interest focused on LINK, which Citibank also highlighted in its report, with quantitative indicators, the percentage value of the total supply held on smart contracts has reached 56.7%, thus achieving a new record.

If we examine the LINK / USD parity technically, the pair broke the neckline of the double bottom formation by breaking the $ 28.90 level upwards. While target pricing is around $ 35.50, a brief retracement prompted a retest of the old resistance new support zone at $ 28.90. This level is also above the 50% slice, which is one of the most critical levels of Fibonacci, and this step back, which is healthy for LINK, will be supportive for the ensuing ups CCI and momentum continue to stay above the uptrend. The MACD is above the reference line and is in an uptrend position. 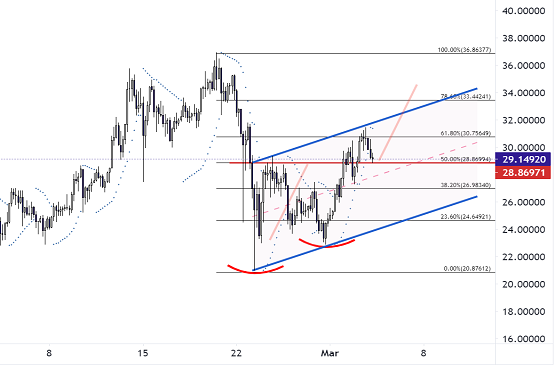 Although BAT / USD is among the leading short-term and long-term coins proposed by the ICRYPEX Research Unit, it has also satisfied its investors with its 50% upward performance in the last two days. BAT / USD is trading sideways with a slight retracement, trading at $ 0.7630 this morning. Although BAT / USD, which was 12 cents behind its yesterday's peak, retreated under market effect, its potential towards $ 1 levels may continue under the influence of flag formation. We maintain our positive view for BAT rather than market movements. While new purchases in pullbacks or profit sales in the resistance zone are decisions that are valued by investors, BAT can maintain its position in the upwards as long as the $ 0.7360 level does not fall behind. 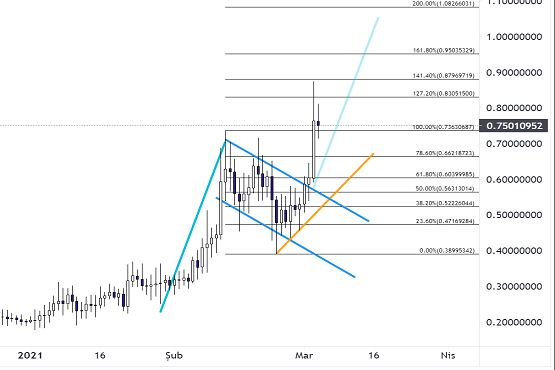