Another Record From Ethereum

Daily use of Gas in the Ethereum network is at an all-time high, according to Etherscan on-chain data. The term "Gas" refers to the transaction fees on the Ethereum blockchain network. When the use of gas is high, the user activity on the chain increases. Approximately $ 300 million worth of ETH will also be deposited to the Eth2 deposit contract address, which can also reduce the selling pressure on ETH in the long run.

Margin Transactions Will Be Terminated On Coinbase After CFTC Regulations
The USA will not allow margin trading on the exchange, pursuant to the regulations introduced by the Coinbase Commodity Futures Trading Commission (CFTC), a cryptocurrency exchange established in San Francisco. The stock market started to cancel open orders until this time. It plans to completely remove the margin trading application from its services in December next month.

Bitcoin Statement by PayPal CEO
PayPal CEO Schulman said that cash will gradually begin to disappear in the program he attended and that digital currencies will replace it. Emphasizing that this can even be a cryptocurrency such as Bitcoin or Ethereum, Schulman stated that we will see a digital money project from central banks. He said that although people now see Bitcoin as an investment tool, they will actually be able to see it as a stable currency. He said that his companies will also increase the Bitcoin volume significantly.

The Interest of World Giants from Every Sector is Increasing in Bitcoin
Gazprombank (Switzerland), a branch of the bank owned by the Russian energy giant Gazprom, carried out the first customer transactions as part of its new bitcoin services. Gazprombank will present the new cryptocurrency solution in cooperation with platforms such as fintech firm Avaloq and cryptocurrency custodian Metaco.

Japanese Giant Starts Cryptocurrency Transactions
Japanese financial services player SBI will borrow Bitcoin starting today at a 1% annual interest rate, according to an announcement. SBI seems to borrow a minimum of 0.1 Bitcoin ($ 1,880 at current prices) to a maximum of 5 Bitcoins (more than $ 94,000) from users and pay them for allowing it. He started his first transactions with Bitcoin, Ethereum, and Ripple.

Bitcoin approached $ 19,500 levels yesterday, reaching record levels this close for the first time. Although it could not renew its record in terms of price, the market size has set a new record with 347 billion dollars. This morning Bitcoin's market dominance is shifting at 61.7%. The trend towards currencies with the market value in the top 10 in altcoins continues. Bitcoin's Google searches are also well behind 2017. Due to the negative correlation with gold, which we have been discussing for the past two days, daily drops in gold support Bitcoin upwards.

When we consider BTC / USD technically; Movements are continuing within the bullish channel and the upper resistance of the channel is being tested. In the places we mentioned with the ring, we say to return to the old trend, that is, to follow the minor trend in BTC that 'pull back'. In terms of the intermediate support level, the $ 18,500 levels stand out, while the lower channel is at $ 17,800 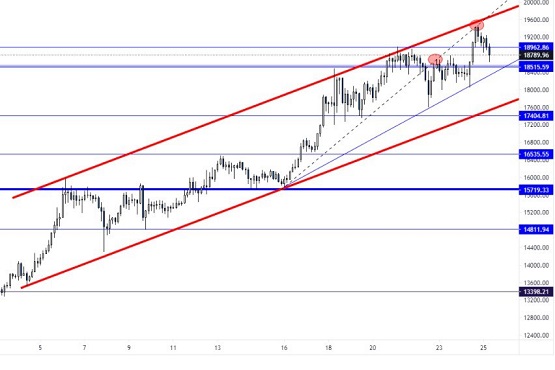 Although Ethereum is experiencing some decline this morning, the whole crypto money market has turned to instant losses with the news that an overseas stock market will terminate margin transactions in our daily news. While Ethereum is waiting for December 1, such retreats could increase market interest. Therefore, apart from minor corrections, we do not expect to see a reversal and trend-changing market for now. The number of accounts with 10 thousand or more ETH in their wallet has reached the highest level in 3 months.

Technically, ETH / USD, which broke the uptrend to the upside and increased its momentum and slope, was stuck at $ 630 in its recent rise and could not surpass it. Although there was some news pullback this morning, the MACD and Momentum indicators are maintaining their buying volumes. If ETH continues to lag behind $ 600 today, it will form a minor descending trend starting at $ 623. It is useful to remind that the momentum is strong. For this reason, $ 600 is followed as a daily reference level. 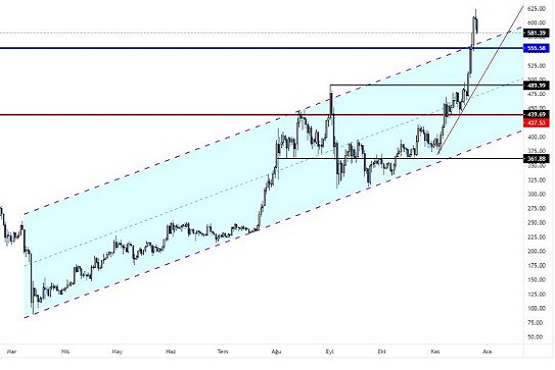 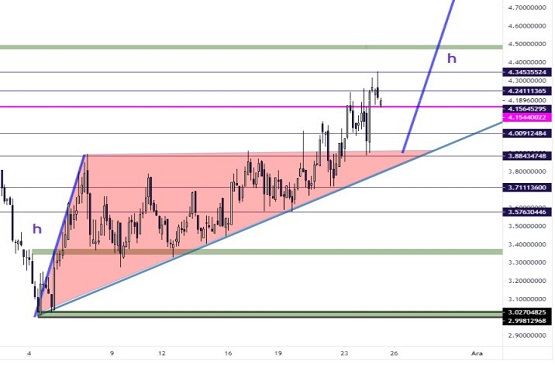 Ripple is trading around $ 0.63 this morning with a 1% retracement. It has seen an increase of 110% in the last week. Japan's financial giant SBI Group has announced that it will start serving Bitcoin, XRP, and Ethereum through a new system. SBI will enable cryptocurrency users to trade through VC Trade. The investments of world giants in cryptocurrencies can allow it to take a positive course in Ripple. In addition, the positive statements of the Visa CEO about cryptocurrencies in yesterday's bulletin brought Ripple to mind as a payment tool.

XRP / USD saw a rise as high as $ 0.7930 yesterday, breaking the weekly period resistance level of $ 0.6230. XRP / USD is trading at $ 0.65, and if volatile movements continue, it created a trading band between $ 0.62 and $ 0.79. According to the technical analysis, it may be desirable to retest these levels in XRP where a gap is created at $ 0.4070. Good follow-up of support resistances in volatility can shorten the distance that can be done in a long time on the basis of the process. Although it is used as a means of payment, we can say that the volatility is high. 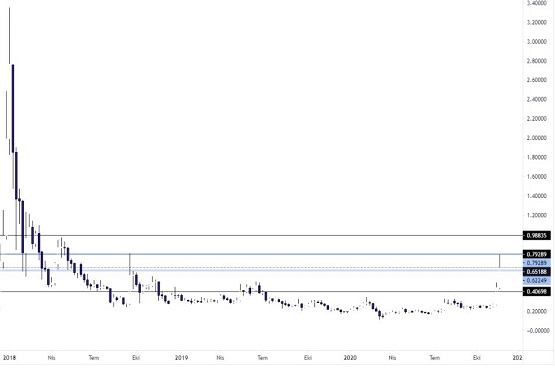 Litecoin, which has been premium in recent days, has been negatively decomposed after the Coinbase news, withdrawals up to $ 86. There was an increase of about 17% in the weekly period. According to Chainalysis data, the amount of Litecoin that investors do not have on stock exchanges and transfer transactions between wallets is above the average in the light of the last 6 months. According to the daily averages, it has increased by 17% in the last day.

The continuation of the rising trend in LTC / USD had started to rise steadily after testing the lower band of the channel at the end of October. After breaking the critical resistance of $ 73, this accelerated rise, which also broke the upper band of the channel, managed to surpass $ 94 with the peaks of purchases. Profit from these levels is priced around $ 87 this morning, even though sales come back up to $ 85. With the occurrence of possible volatile movements during the day, we will be following the 84-96 $ range. 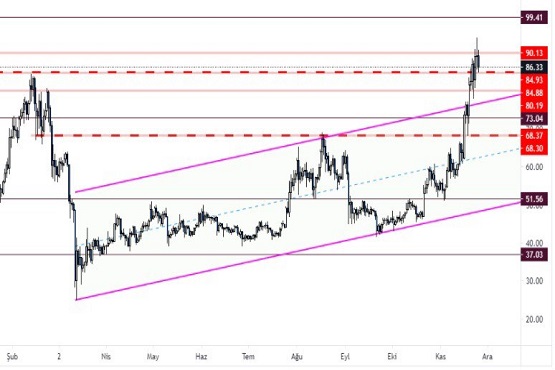 While there have been around a 10% premium on Chainlink in the last week, it is trading at around $ 15.40 this morning with a decrease of around 2% this morning, with the news that Coinbase will terminate its margin transactions in Asia in the morning. According to Glassnode data, LINK's total number of addresses has increased to over 900,000. Especially with reaching the required stake amount for Ethereum 2.0, interest and demand in cryptocurrencies using the Ethereum network also increased.

While continuing its movements within the bullish channel since the end of September, LINK has risen above this channel with the increase in buying pressure in the last week and formed a minor trend starting from the level of $ 11.85. Today, with the profit realizations, it is floating, and it is $ 15.20. and the minor trend is still positive. Although it is the support level of the channel where $ 14.80 broke, we see that transactions mostly returned at $ 15.75 above. The corridor of $ 14.80-15.75 can be followed as a daily band 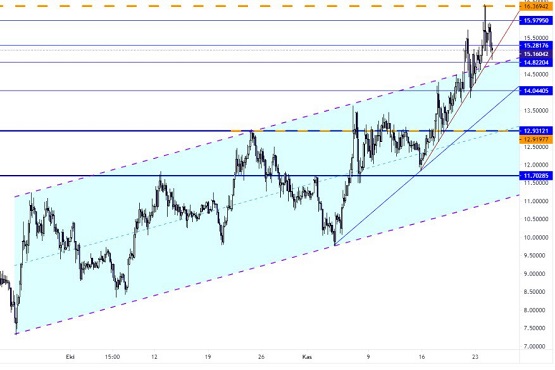 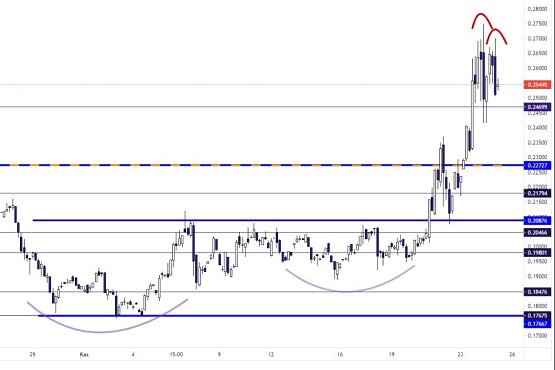