According to Bloomberg, Ark Invest is participating in the race between institutions, applying for cryptocurrency ETFs. ARK Invest has filed an “ARK 21Shares Bitcoin Futures Strategy ETF”, an ETF that will invest in Bitcoin futures rather than the cryptocurrency itself.

Deputy of the Bank of England Warns About Crypto

Jon Cunliffe, Deputy Governor of the Bank of England, stated that a collapse in the cryptocurrency market is absolutely “reasonable” and that regulators worldwide should comply with crypto rules “as a matter of urgency.” Although cryptocurrencies do not currently pose a threat to the country's financial stability, the deputy governor says that he has “excellent reasons” to think that this may not be the case for much longer.

In October, in addition to the MoneyGram partnership, SDF has published a technical report describing how Stellar is designed to facilitate the distribution of Central Bank Digital Currency (CBDC). Stellar Development Foundation (SDF) noted that the network has unique features to support these assets and discussed how a central bank could implement it in Stellar.

He Helps Creators, Small Businesses to Learn About NFTs and Crypto

Visa and NFT artist Micah Johnson has launched an initiative to help digital content creators learn to use NFTs and cryptocurrency. The firm had also purchased a CryptoPunks NFT avatar for more than $150,000 ETH in August.

An offer for Polkadot's first parachain auctions was approved by its community today. These parachains are said to be the "last piece of the core functionality" needed for Polkadot to achieve its multi-chain interoperability goal.

Ethereum, one of the largest decentralized blockchain networks in the world, attracts smaller and medium-sized retail investors, according to on-chain data. Datas from Glassnode analytics reveal that the number of Ethereum addresses holding more than 32 ETH has reached a 5-month high of 109,188, during a buildup period that peaked about a week ago.

After China has ruled as the world's dominant Bitcoin mining epicenter for several years in a row, the United States has "taken a leading position in bitcoin mining," according to new data from Cambridge University.

Morgan Creek Capital CEO Mark Yusko said in an exclusive interview with Cointelegraph that by laying the foundation for the Internet of Value, the cryptocurrency and blockchain would generate more wealth than Web 1.0 and Web 2.0.

The largest asset manager, BlackRock CEO, said that although he sees "great opportunities" for digital currency, he is not sure how the cryptocurrency field will move forward in the long term.

Purpose Investments, which has more than $12 billion under its management, announced the launch of mutual fund units on Wednesday for the world's first ETF backed and settled by Bitcoin.

Bitcoin gained a 1,00% value during morning hours; the current price is $56.339. The news over the past 24 hours shows that the Bitcoin outlook is positive. The fact that Ark Invest has just applied to a Bitcoin futures ETF increases our confidence in accepting a Bitcoin futures ETF. Canada's largest Bitcoin ETF investment fund opened its doors to investors, too. After China has ruled as the dominant Bitcoin mining epicenter of the world for several consecutive years, the latest data from the University of Cambridge show that the United States has taken a leading position in Bitcoin mining, which means that the statement by China no longer has an impact except the money flow.

When we consider the BTC/USDT parity in technical terms, the positive trend goes on, alongside the market recovery in the evening, which started the day with selling vibes yesterday. Bitcoin hit the $58.355 level, which is the price target we have been waiting for a long time this morning, and has seen a short-term reaction from the region close to this level. On 4-hour and daily metrics, we think this level can be broken upward during the day. This break will bring about a price movement that will take us to the $60.000. Negative divergence in the RSI on the 4-hour chart may lead to short-term sales pressure, but the upward trend is estimated as strong. 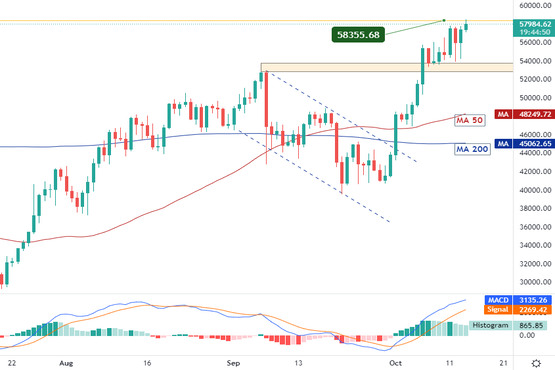 Ethereum gained a 0,80% value during morning hours, and the current price is $3635,21. Ethereum, one of the largest decentralized blockchain networks in the world, attracts smaller and medium-sized retail investors, according to on-chain data. Datas from Glassnode analytics reveal that the number of Ethereum addresses holding more than 32 ETH has reached a 5-month high of 109,188 during a buildup period that peaked about a week ago.

When we consider the ETH/USDT parity in technical terms, along with the rise yesterday, there is a bullish engulfing candle on the daily close levels. Regarding the bullish engulfing candle, the break of the $3685 level is important for ETH, which already holds strong metrics. Together with this break, which is necessary for the approval of the head-and-shoulders formation, our next price target is the $4600 level. 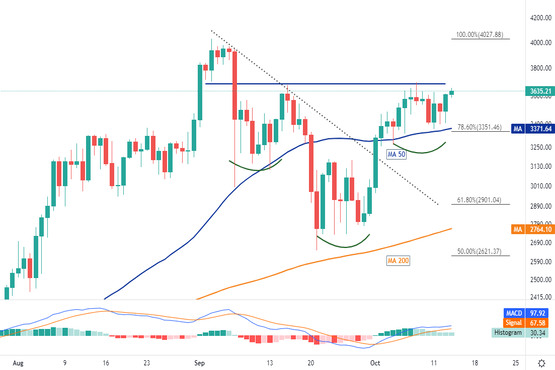 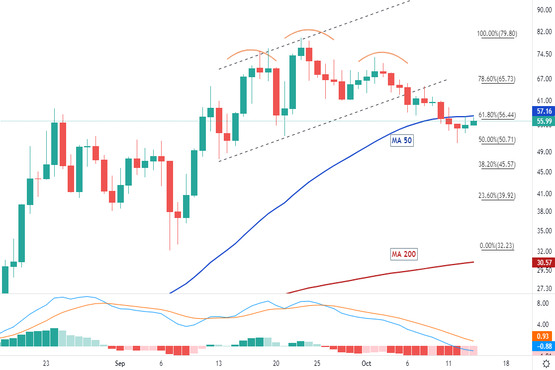 Ripple gained a 0,35% value during morning hours, and the current price is $1,1314. When we consider the XRP/USDT parity in technical terms, XRP retreated to the $1,086 (the 50-day moving average), yesterday and the support from the same zone today moves upwards. In short-term metrics, there is also an optimistic scheme compared to yesterday; a daily close above the Fibo'78.60 ($1,14 level) will support the rise towards our initial price target of $1.41. 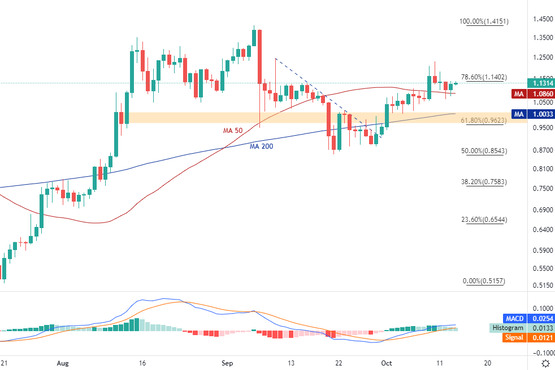 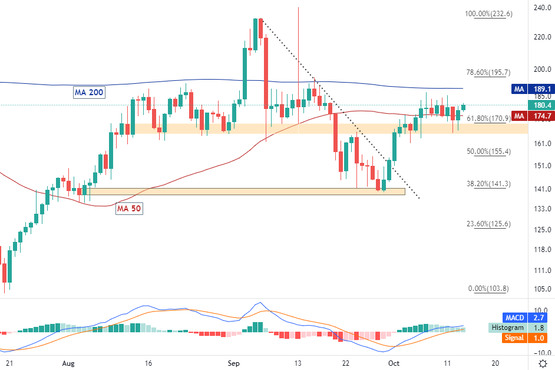 LINK gained a 2,10% value during morning hours, and the current price is $26,19. When we consider the LINK/USDT parity in technical terms, LINK, which recently saw sales pressure due to both the resistance from its 50-day moving average and the downward break of the yellow-marked compression area, retreated to the $23.50 levels. The sell signal came from the MACD on Tuesday during the daily period, but according to the current price movement, this metric is considered to have given the buy signal again. As we noted in the bulletin yesterday, the outlook for LINK in short-term metrics had turned positive, and thanks to this, the daily metrics also improved, experiencing a recovery in the short-term price. With these developments, we think that there will be a rise towards the $ 27 levels, which is equivalent with the 50- and 200-day moving averages again. 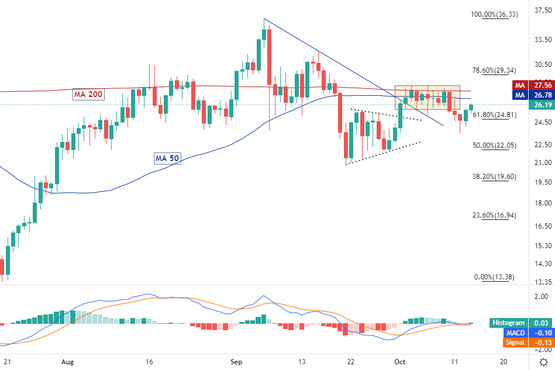 BAT lost a 0,25% value during morning hours, and the current price is $0,7045. When we consider the BAT/USDT parity in technical terms, BAT retreated to the $0,6762 (Fibo'50) yesterday, went up with the support from this zone, and formed a bullish candle as of the daily close. At the same time, we suppose that a rise for the BAT, where the double bottom formation is also visible, will continue towards the Fibo'61,80 in the short term and the $0,749 level (50-day moving average). 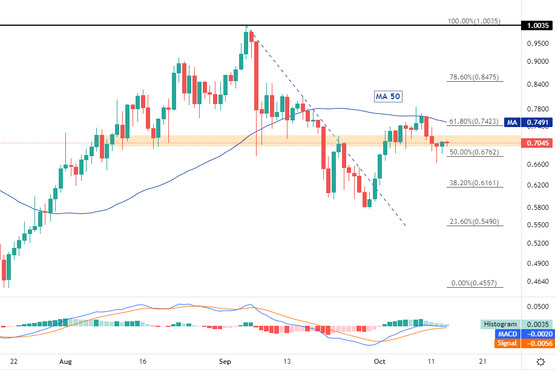