As the Demand for Ethereum Grows, so does the Gas Fee

Ethereum price reached its highest level since May 2018. In line with the increasing demand and volume, gas prices also increased. While the increase in prices was welcomed, the increase in gas prices reduced the positive atmosphere. Gas fees have climbed to a three-month high, according to Bitinfocharts.com.

Banking giant Goldman Sachs stated that Bitcoin in its current form does not pose a serious threat to the gold market. Bitcoin, which went up to $ 23,700 on December 17 and broke the all-time price record, increased its market value to $ 427 billion.

$ 1 Million Bitcoin Gift from Famous Rapper
American rapper Megan Thee Stallion has joined forces with Square's mobile payment service Cash App to send $ 1 million worth of Bitcoin to his followers. In a follow-up Tweet, the hip-hop star said that Bitcoin is trending to rise over time, urging people to "trade cryptocurrencies".

Grayscale Adds 2.5 Billion Dollars to the Money Managed in 3 Days

Twitter CEO Jack Dorsey has doubled his profits with his Bitcoin investment with his other company, Square. Square announced in October 2020 that the company's 1% reserve was allocated to Bitcoin, purchasing BTC worth $ 50 million. He bought 4,709 BTC at 10,600 dollars.

Transfer Fees Increased by 3X in 1 Week in Bitcoin

Elon Musk posted on Dogecoin (DOGE) on December 20, and the DOGE price rose more than 20% after that. Musk then shared a few tweets about Bitcoin and compared it to fiat currency.

A hacked database of more than one million Ledger customer e-mails has been made available on the hacker site Raidforums. Data was stolen during the hacking of the hardware wallet manufacturer's e-commerce database in June 2020. No financial information, recovery phrases or private keys were exposed in the attack.

US Treasury Department To Recruit Experts To Fight Crypto Crimes

The United States Department of Treasury is seeking expert advice on cryptocurrencies to tackle the legal challenges associated with the crypto industry. KYC will be made mandatory for personal wallets and blockchain nodes, especially in terms of legal procedures.

Traditional asset managers, who see cryptocurrencies as a protection against inflation, seem to have increased interest in cryptocurrencies with the latest macro-economic policies. American Express announced their support for FalconX, especially as it provides one-stop research and pricing and brings simplicity to the increasingly complex digital asset space through a platform.

Bitcoin is trading at $ 23,690 this morning with a 1% gain. Expanding the records in the 23,000 band to 24,000 over the weekend, BTCUSD renewed the ATH level with 24,200. In the USA, the pandemic package is expected to pass tomorrow and the households will receive nearly $ 1000 aid vouchers. We saw a similar scenario in March. However, the publication of over 1 million e-mail addresses and names in a forum in the cold wallet Ledger posed a market risk. The regulations brought to the agenda by the US Treasury for crypto currencies did not create a negative perception in the market. Nevertheless, these and similar news may be the basis for profit sales. On the other hand, in this process, where small investors sold for return in BTC, it was seen that large investors expanded their BTC purchases and were embraced by institutions day by day. Therefore, we underline profit sales rather than a significant decrease.

When we consider BTC / USD technically; In addition to the positive and gap-opening futures this morning, the pennant formation as a continuation of the upward trend continues, but the pause in the range of $ 24,200-23,150 may indicate an intensification of transactions, some withdrawal and support. In this region, it is useful to stay away from purchases close to resistance. 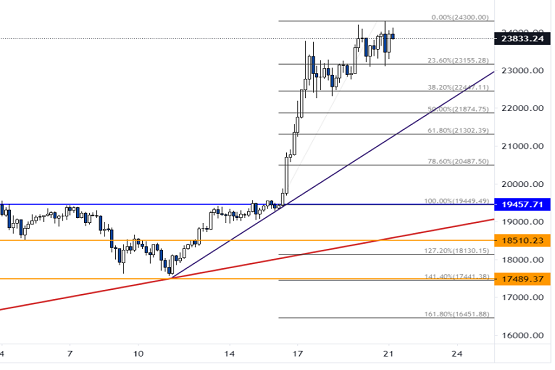 Ethereum is almost 15% behind Bitcoin in last week's returns against the dollar. Although we cannot see that the Ethereum 2.0 transition has started to price, we can say that the BTC dominance is approaching 67% and the altcoin season has not started yet. Still, the money locked in DeFi ‘, where the majority consists of ETH tokens, reached $ 16.7 billion. Therefore, we can say that we find the price level of Ethereum at a discount in the medium term.

When we consider ETH / USD technically; Transactions continue in the range of $ 620-670. If the double peak in this region falls behind $ 620, withdrawals up to the $ 585 band may be in question. Nevertheless, although the uptrend continues in the short term, supports in ETH / USD will be followed for the new purchase location in case of withdrawals that may occur under the leadership of BTC. 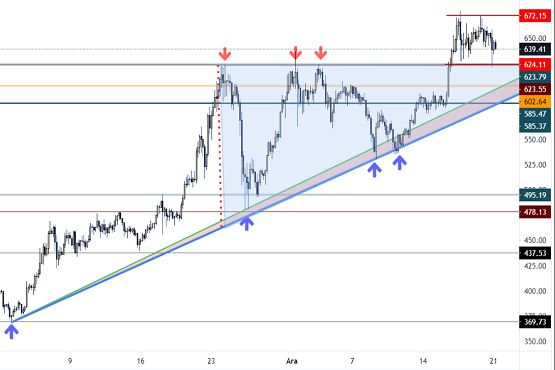 AVAX / USD remains weak near $ 3.25, retracing near 2% this morning. For AVAX, which technically recovered and did not offer a bullish outlook, the $ 3.17 level was the support point to the Fibo'23.6 tranche, while we see that the uptrend faced heavy sales in the $ 3.60 zone. For this reason, it is useful to remember that the rises are short-term and there is intense selling pressure in the short term. 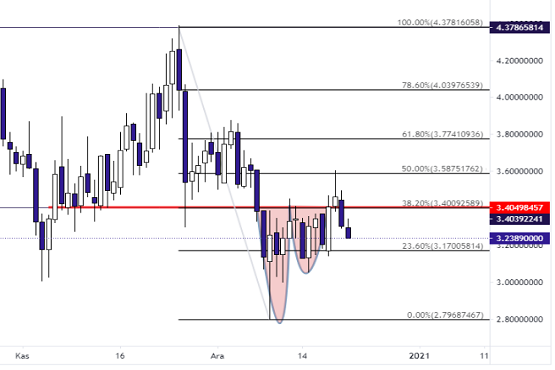 Ripple is trading near $ 0.56, up about 1% on the first day of the new week. The United States Department of the Treasury needs expert advice on cryptocurrencies to overcome legal challenges following regulatory news. For this reason, it makes expert purchases in order to make faster decisions. After the regulation news, the first reaction in the markets was not negative. Ripple, which wants to move its center especially after the regulation decision and in accordance with other legal regulations, can speed up the process. Determining its new center can be welcomed in the market.

The stalling selling pressure on XRP / USD in the $ 0.44 region helped to react from this region. However, we saw that the rise met with resistance at $ 0.62 in line with our expectations. In possible corrections, while 0.52 $ zone will have intermediate support, we can expect continuation of horizontal movements parallel to the course. For this reason, we maintain our horizontal trading strategy and our horizontal trading band is between $ 0.52-0.59. 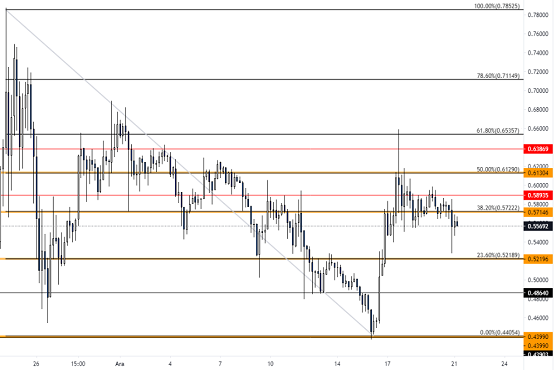 While Litecoin rose to $ 124 over the weekend, it is trading near $ 117 this morning, with around 3% change from yesterday's gains. According to Glassnode data, Litecoin transaction volume reached the highest level in the last year. Litecoin average transaction volume reached its highest level in the past year as Bitcoin broke $ 24,000 and reached an all-time high. The increase in Litecoin price also caused an increase in demand. The actual price of Litecoin reached its highest level in the last nine months. We see that the short-term market sentiment has disappeared. It provides a positive indicator in terms of the longer term volatility of Litecoin's value. Movements continue in the markets, especially with Grayscale's purchase of 67,400 Litecoins over the weekend.

This year's record in LTC / USD was $ 124.4. Litecoin surpassed BTC with 16 points in weekly gains of 40%. While the double top target is completed after being seen at $ 105, the Fibo'61.8 retracement zone in possible retracements is past $ 99.50. For this reason, we can focus on the $ 99.50 level in the weakening at the $ 120 border. In the upward trend, possible pullbacks can be perceived as a continuation of the uptrend. However, in the short term, especially the intraday outlook sees resistance in the $ 120 region. 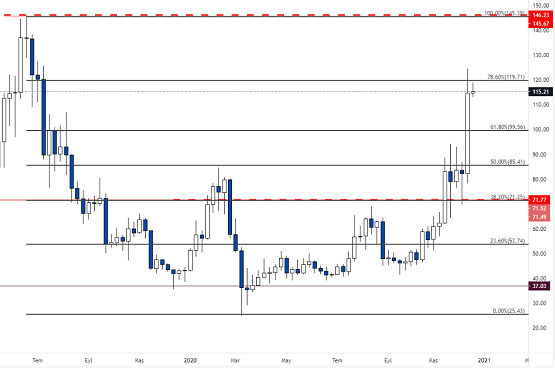 Drawing a market outlook that retreated over the weekend, LINK is trading around $ 13 this morning with a change of 1% compared to yesterday's trading. According to Glassnode data; LINK's percentage of supply on smart contracts reached an all-time high. The increasing demand of institutional investors for Ethereum has also caused an increase in the amount of Ethereum locked. Ethereum 2.0 pricing hasn't started yet. Current pricing has continued to rise, mainly under the influence of Bitcoin. Especially the increase in trust and demand in the Ethereum blockchain can also have a positive effect on LINK using the Ethereum network.

While the downtrend in LINK / USD continued, the uptrend channel formed under this trend could not be continuous and ended by breaking down. While we have an interim support of $ 12.60 in pullbacks, for LINK, where we do not see any activity in the short term in terms of performance for now, the descending trend will continue and the rises will be met with sales unless the $ 13.60 level is broken. For this reason, the descending trend without seeing a complete break and our strategy accordingly will continue. 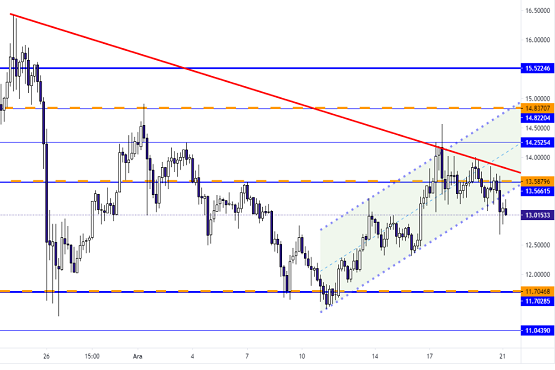 BAT / USD is trading with a gain of around 2% this morning from the $ 0.2370 level. BAT / USD, which has an inversely correlated relationship with Bitcoin in the past weeks, has participated in the bullish movement by showing similarity at a rate of 0.30. However, due to the instability it shows when it rises, we continue to remain short-term for BAT.

When we examine BAT / USD from a technical perspective, it continues its weak progress in transactions. BAT / USD, which retreated below the $ 0.23 level over the weekend, is trading at $ 0.2370. If the retracement continues, the $ 0.2150-0.2000 levels come to the fore. While the outlook is downtrend and weak in the short term, $ 0.25 trials still have potential. 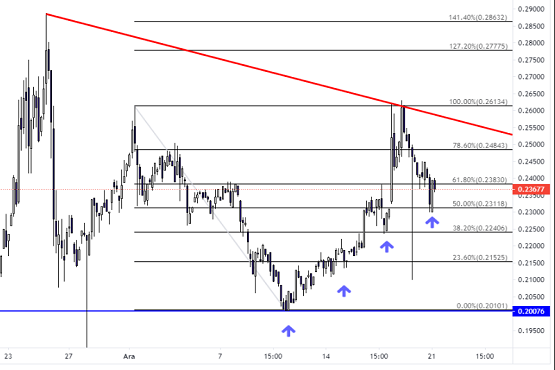 We support the Turkish sports and our sportspeople via our sponsorships agreements with 1907 Fenerbahçe Wheelchair Basketball Team, Cem Bölükbaşı, Erden Eruç, and Turkish Automobile Sports Federation! In this very rewarding and helpful journey of ours, we will continue to enrich and strengthen the Turkish sports thanks to the new steps we take in reaching brand new sponsorship agreements.