One of the world’s biggest tennis tournaments – the Australian Open (AO) – is entering both the NFT and Metaverse side of the cryptocurrency industry. This year's championship will also be held in Decentraland, the leading virtual reality platform.  At the same time, fans will be able to participate further by buying non-fungible tokens linked to live match data.

PayPal Works On Its Own Stablecoin

PayPal (PYPL) is looking into launching its own stablecoin as the company grows its crypto business. The payments giant confirmed the news after Bloomberg found evidence of code for a "PayPal Coin" in its app. The company's existing support for cryptocurrencies is limited to Bitcoin, Bitcoin Cash, Litecoin, and Ethereum

According to the analytical website BitInfoCharts, the third-largest Bitcoin address, has purchased 456 BTC this week. The total purchase is worth around $20 million, as the asset's price went $42,000. It marked the first significant Bitcoin purchase of the year by the whale as a purchase of six Bitcoins had been recorded on the account at the start of the year.

Total Value of ETH in 2.0 Deposit Contract Hits to an ATH of 8.9 Million ETH

According to on-chain data from crypto analytics platform Glassnode, the total value in the ETH 2.0 deposit contract has reached an all-time high of 8,965,186 ETH.

Ethereum's Dominance in DeFi Is Falling

Ethereum is undoubtedly the leading blockchain in DeFi, but analysts at JPMorgan note that Ethereum's dominance in the field is declining. According to analysts, the rise of other smart contract-enabled protocols, such as Avalanche, is proof that Ethereum's leadership is not absolute at DeFi.

As published by The Daily Hodl, Raoul Pal said, if I take the derivatives market, it is worth $1 quadrillion. I believe there is a good potential that this asset class will rise to $250 trillion, or 100 times its current size, which would be the fastest expansion of any asset class in history.

Bitcoin gained a 0,80% value during morning hours; the current price is $42.191. According to the analytical website BitInfoCharts, the third-largest Bitcoin address, has purchased 456 BTC this week. The total purchase is worth around $20 million, as the asset's price went $42,000. It marked the first significant Bitcoin purchase of the year by the whale as a purchase of six Bitcoins had been recorded on the account at the start of the year.

When we consider the BTC/USDT pair technically, BTC broke the major uptrend on August 3, and sales pressure came to stage. It now holds onto the support level above $41.000. The weekly close of BTC, which signals a trend reversal with the Doji candle pattern on Saturday, was at the level of $41.876. As long as the support zone marked with blue does not break down, upward price movement can be expected in BTC. 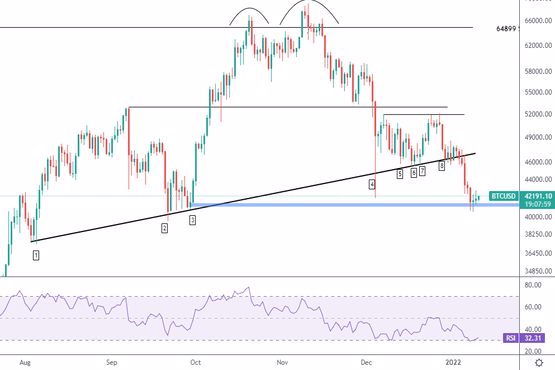 Ethereum gained a 0,75% value during morning hours, and the current price is $3176. According to on-chain data from crypto analytics platform Glassnode, the total value in the ETH 2.0 deposit contract has reached an all-time high of 8,965,186 ETH.

When we consider the ETH/USDT pair technically, ETH had sharper downward price movements than Bitcoin. It found support at $3000 (psychological level) and closed the week at $3151.97. Along with the price movements over the weekend, there was a recovery in the 4-hour chart, and a positive divergence occurred in the RSI. Yesterday, ETH, retesting its existing uptrend as of August 3, failed to break the trend. A rise can occur if it breaks the trend upwards and closes the day above $3429 (200MA). However, the level of $2985 should be followed not to lose momentum. 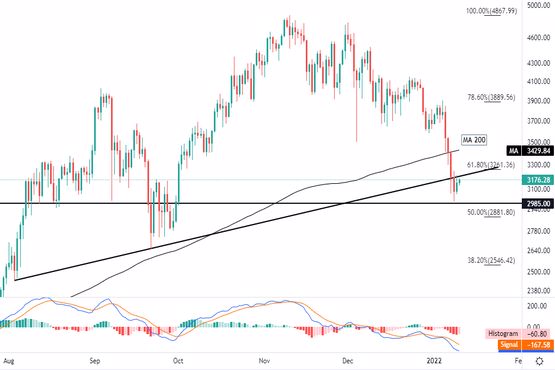 AVAX gained a 1,00% value during morning hours, and the current price is $90.52. When we consider the AVAX/USDT pair technically, AVAX retreated to $79.80 (support level) in the weekly chart when the market plummeted. AVAX had a bullish engulfing candle as of the daily close yesterday. However, it can still have pullbacks when starting the week. It is worth considering that the pressure on sales has not ceased throughout the market, and there has been no change in the risk elements at the macro level. 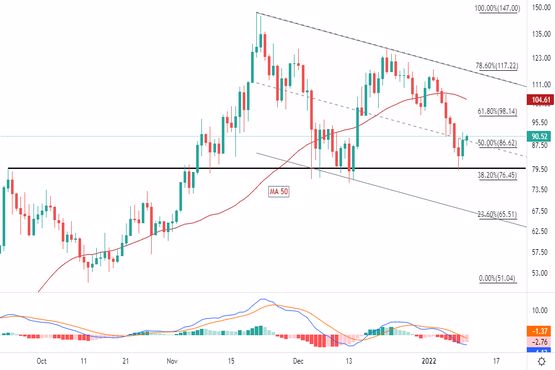 Ripple gained a 0,72% value during morning hours, and the current price is $0.7573. When we consider the XRP/USDT pair technically, despite the sharp declines experienced throughout the market, value losses remain limited in XRP. A horizontal price movement is observed above the strong support level of $0.7121, and the price movement continues below the downtrend as of December 23. It can be considered as a stop level below $0.7121 (the daily close level) in XRP, which can be positioned with the trend breakout. 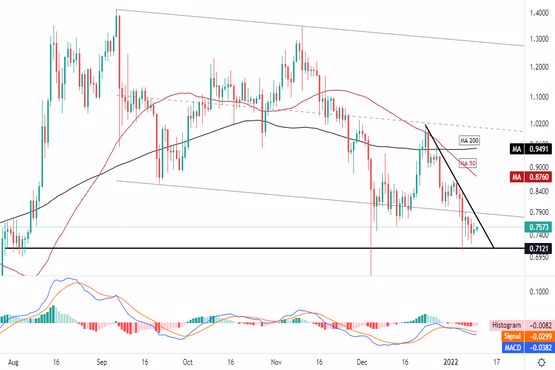 LTC gained a 0,10% value during morning hours, and the current price is $130.8. When we consider the LTC/USDT pair technically, LTC had had a stagnated price movement between $141-144 for a long time. And LTC broke the support zone downward, and sharp sales followed. LTC retreated to $120. This weekend, LTC had a horizontal price movement, but the retracement may continue and jump to $113. A breakout of the downtrend on November 2021 can only trigger a rise. 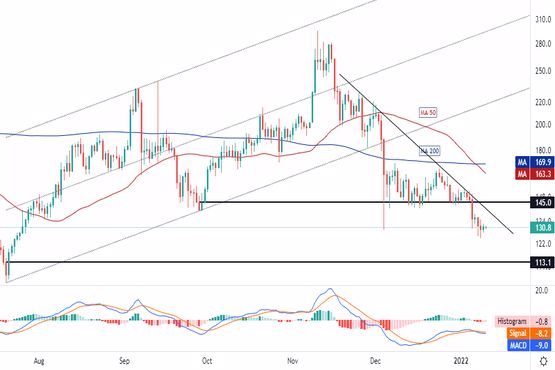 LINK gained a 1,65% value during morning hours, and the current price is $28.11. Despite all the negative market conditions, we have a high belief that LINK will have a happy ending in 2021, which brought an incredible return of 26 percent in the weekly chart. LINK had taken steps into developments and interoperability. Maybe LINK failed to fulfill expectations against its investors in 2021, but 2022 appears promising for realizing this aim.

When we consider the LINK/USDT pair technically, LINK, which continues price action inside the ascending channel as of July 2020, the positive persistence was hurt only for one day. And it kept the 200MA level safe when closing the days. The first major resistance level for LINK is the $35-36 band. 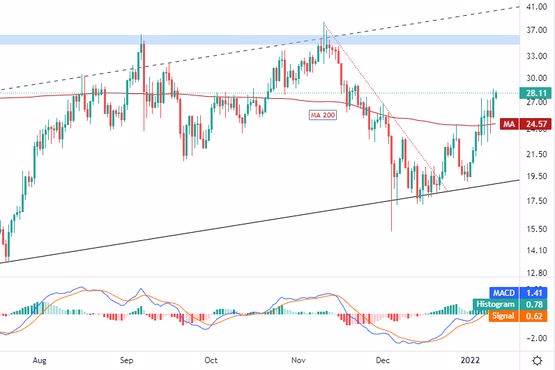 BAT gained a 0,75% value during morning hours, and the current price is $1.0418. When we consider the BAT/USDT pair technically, BAT broke the uptrend as of November last weekend and found support at $0.9679 (Fibo'38,20). BAT closed yesterday positively. Today there is an upward price movement. If it breaks the trend and closes the day above, a rise towards $1.2386 (50MA) can occur. 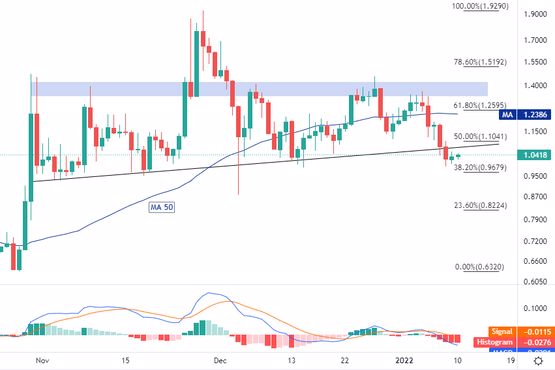