Ban Is Not on the Agenda, says Turkish Minister of Treasury and Finance

Minister of Treasury and Finance Lütfi Elvan has stated that the interest in cryptocurrencies has been increasing since the beginning of the pandemic and ban is not on their agenda. Elvan added that they are making the necessary preparations for the legal regulations and studying on a new law.

Metromile Will Accept Bitcoin for Premium and Claim Payments
An auto insurance company Metromile has stated that they will purchase $10 million worth of Bitcoin in the second quarter of 2021. The company says the policyholders are now able to pay for their premiums and receive their claim payouts in Bitcoin or other cryptocurrencies.

Litecoin of which the number of active wallets has been increasing since the beginning of 2021, has reached its 13-month high against Bitcoin. This increase indicates that investors' interest in Litecoin continues and LTC will continue its rising trend.

The Central Bank of Iran has announced that only cryptocurrencies that are mined through legal channels inside Iran would be authorized for processing payments. It has been considered that Iran wants to stop the capital outflow with this update.

The Securities and Exchange Commission’s Chairman, Gary Gensler has stated that the Congress should regulate the cryptocurrencies to protect the investors and to instill greater confidence.

The U.S. Tax Office Seeks to Learn about Taxpayers

The US Tax Office (IRS) requested access to user information of taxpayers who made a minimum of $ 20,000 worth of transactions on the US-based international crypto currency exchange between 2016 and 2020. This request of the IRS was approved by the Court.

In the last quarterly report released by Ripple, it was stated that total XRP sales in the first quarter of 2021 has increased by approximately 97% to $150.34 million compared to the previous quarter.

Investors trading bank Citi is considering to start cryptocurrency services after the increasing interest in cryptocurrencies.

Bitcoin is trading at $56,000 this morning, with a horizontal change. SEC Chairman Gary Gensler said at the House of Representatives Financial Services Committee that Congress should consider regulating crypto exchanges. Speaking at CNN Turk in the evening, Turkish Treasury and Finance Minister Lütfi Elvan said that they do not have an attitude to ban cryptocurrencies and that they are working on income tax. With these local and global announcements that came yesterday, BTC experienced profit sales. Although it declines with these news, there is no deterioration in BTC's basic or on-chain data. The change in the number of active and new addresses continues to rise. Stablecoin reserves broke a record. The BTC/Stablecoin ratio held in the exchanges is at the lowest level in 6 months. This shows that there are too many stablecoins to turn to BTC and BTC has limited space to come down.

When we consider BTC/USD technically, the movement in the bullish channel continues. Although the previous peak level of $65,000 could not be broken, we see that BTC is in the uptrend and even in its channel and the upper band of this channel is at the level of $61,000. We maintain our positive view for BTC as all data supports it. 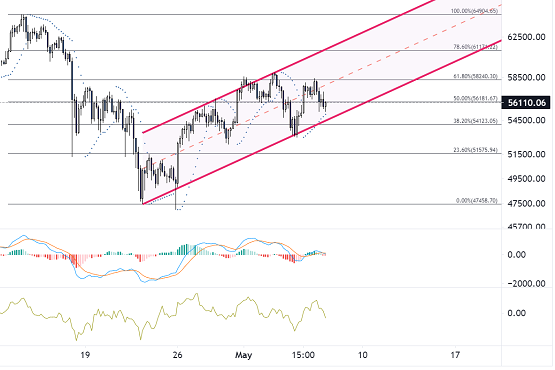 Ethereum  Ethereum could not keep the $3,600 level it tested the previous day, it made a pullback move in line with our expectations. The gap between ETH-BTC has decreased from 15 points to 10 points. This means that either BTC will increase by 10% when ETH is fixed or ETH will withdraw by 10 minus the rate at which BTC was raised. The decrease in the number of active and new addresses in ETH says on-chain data confirms the withdrawal.

When we consider ETH/USD technically, the withdrawal that started as a result of the rising wedge formation continues. The starting point of the wedge pattern is at $3,480-3,490. For this reason, if it cannot test and break these points during the day, it will be a kind of pull back. The rising channel mid-band in its main trend also passes through the $3,450 zone and will be followed as intraday resistance. The outlook is positive, but the resistance zones are strong and the possibility of profit sales is increasing. 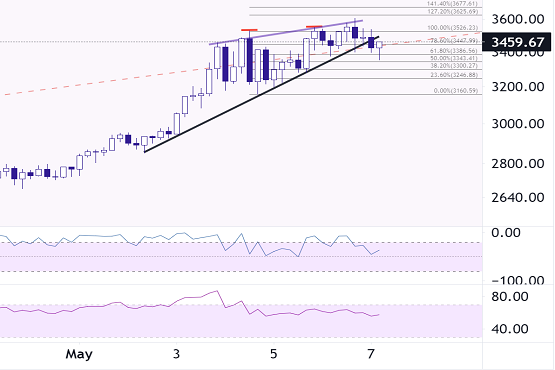 AVAX is up 4% against the dollar this morning at around $39.70. AVAX, which has a market value of $4 billion among PoS coins, has a highly discounted listing price, and it can be easily imagined that AVAX will come to the fore among the premium PoS coins in the future. Within our medium-long term targets, we maintain our three-digit expectation targets for AVAX. We believe that AVAX, which has a market value of 1/3 of its closest competitor SOL, is a value investment.

Technically speaking, the AVAX/USD parity tested around $39.80 by strengthening its buying course by breaking up the Fibo'78.60 zone above the $36.00 level. Candlesticks above the $40.60 resistance in the Fibonacci last slice can accelerate the parity. As $40.60 is the previous local peak of the parity, it may be the zone where profit realizations will be intense and will serve as psychological resistance. While MACD and momentum indicators confirm the cumulative increase of buying volumes with their positions above the trend, a persistence of $40.60 and above can enable AVAX to step into a productive week in terms of increases. 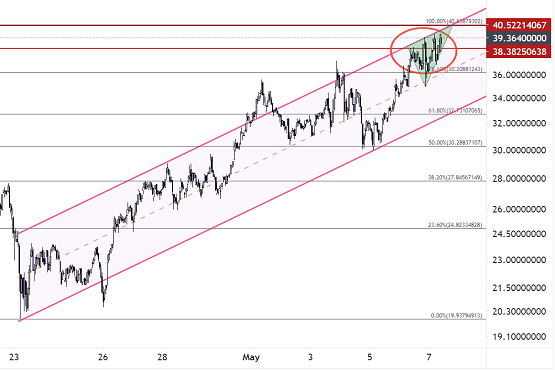 Ripple is listed at $1.57 with a 2% retracement this morning. Within the framework of the meeting decision taken by the SEC, no statement has yet been made on behalf of XRP. Gary Gensler mentioned the need for regulation in cryptocurrencies in his current statements. Although there is no special case for XRP, the legal awareness of cryptocurrencies on the general market and the use of various security tools are read positively. Since the confidence and expectations of Ripple investors in the lawsuit prevents the sale of XRP, it also becomes a psychological force in this sense.

If the XRP/USD parity is technically handled, the parity analyzed in an hourly period could not hold on to $1.65, which is the XRP channel middle band after the profit sales in Bitcoin yesterday, and extended its downward swing to $1.54. Although the reaction afterwards was for a recovery, pricing tested $1.50. If the parity holds above $1.54 in the Fibo 61.80 slice, it may come to $1.67 and then $1.73. 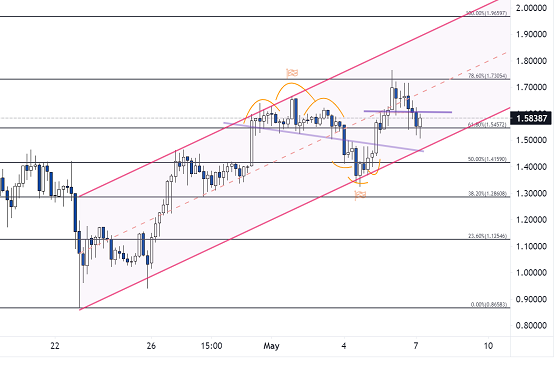 Litecoin is priced around $355 this morning with a horizontal change. Litecoin, which carries its weekly returns to 30%, has made a high return from Ethereum this week. After the Ethereum summit, the flow of money shifted to other major units, providing more positive divergences in Litecoin, which lags behind Ethereum by market cap, recording an all-time high for LTC above $370.

Technically speaking, the LTC/USD parity broke the $320 channel mid-band and Fibonacci pushed the $335 level above the last correction zone and the 4-hour candlestick closes did not drop below this level. Thus, we can say that the purchase volume prevails here and we can see a price reaction when the current profit buying ends. The first resistance for the parity is the $382 zone, while the MACD confirms the bullish reaction as it starts to increase the buying volume in the 4-hour period. The channel upper band extends to the $470 levels. Therefore, we are waiting for new records for LTC. 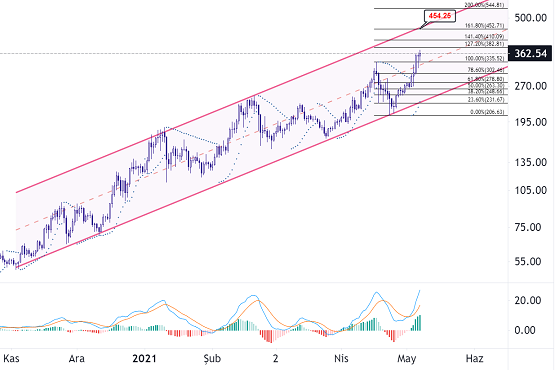 Chainlink  is priced around $47.00 with a 1% pullback this morning. LINK liquidity in the exchange brought a new ATH after the introduction of the current version of Uniswap, which is the most used DEX platform of Chainlink, called v3. The transaction volume on the LINK network has tripled last week, and the Grayscale LINK Trust fund holds $7.2 million worth of Chainlinks, according to current data.

Technically speaking, the LINK/USD parity tested the $51.00 peak, gaining 25% on May 4th. Although the consolidation phase created due to profit purchases creates some weakness in pricing, it is not far from the parity peak. With the $46.00 intermediate support, $44.40 becomes the Fibonacci support level. In the 4-hour period, oscillators maintain their weak appearance, confirming the search of the parity for a reaction area. The outlook is positive but calm in the short term. 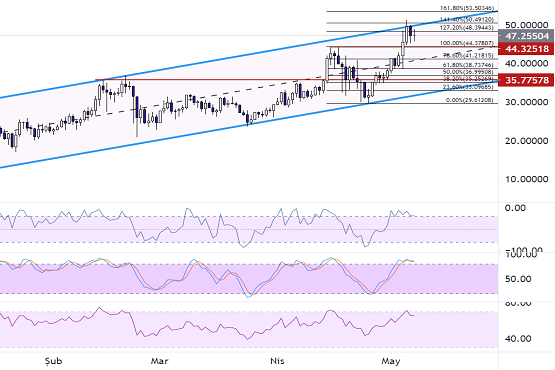 BAT  is up 10% this morning to reach around $1.54. The parity strengthened its buyers movement as it re-included within the boundaries of the bullish channel on May 5th. The parity retreated slightly after testing the $1.59 level, with bullish reactions after completing the consolidation phase in the $1.37 zone, and is gaining support at the upper band of the channel at $1.53. It was the zone where the $1.59 BAT/USD parity tested multiple times in April but faced selling pressures. Currently, while the MACD 4-hour bars confirm the strength of the buying volume, closing above $1.59 may push up target pricing for BAT. As the Fibonacci last slice is located at $1.65, it will be the first resistance above $1.59. 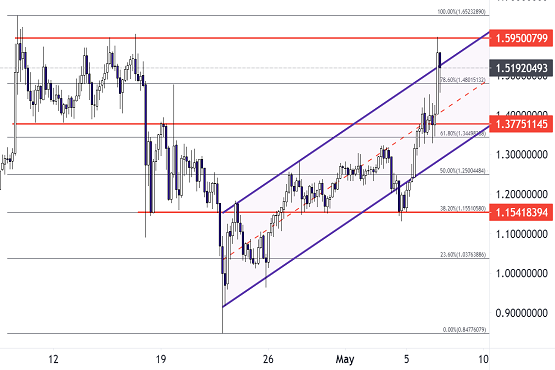