Bank of America: Metaverse Is A Massive Opportunity for the Crypto Industry

Haim Israel – a strategist at Bank of America – believes the metaverse will create huge opportunities for blockchain technology.  It will also cause digital assets to start being used widely for financial transactions.

House Committee Has Announced Crypto CEOs Will Testify at a Dec. 8 Hearing Named "Digital Assets and the Future of Finance"

Maxine Waters, the House Committee on Financial Services chair, has announced several chief executive officers at major crypto firms in the United States will speak at a hearing to discuss digital assets and the future of finance.

During a conversation between Gary Gensler, Chairman of the US Securities and Exchange Commission, and former Chairman Jay Clayton, Gensler said: "The SEC wants all platforms that are lending or trading to be regulated for their decency." said. As he said earlier, "New technologies will not be permanent for a long time if they remain outside the framework of public policy."

Fidelity Advantage Bitcoin ETF will be among the few other spot investment products in Canada, such as the Purpose Investments fund debuted in February. Lara Crigger, Managing Editor of ETF Trends, says that an increasing number of spot Bitcoin ETFs in Canada will not change the attitude of US regulators to such products.

Senator Cynthia Lummis (R-Wy) is asking her Republican colleagues to withhold support for Jay Powell's renomination as Chair of the Federal Reserve, citing what she claims is the unlawful treatment of crypto institutions in her home state.

Putin Warns Cryptocurrencies Carry Risks, Admits They May Have Future

Russian President Vladimir Putin has again spoken about cryptocurrencies, noting the “high risks” associated with virtual assets. However, the Russian leader also acknowledged that digital currencies might have a future, and it is necessary to follow their development.

Bitcoin lost a 1,19% value during morning hours; the current price is $56.502. Fidelity Advantage Bitcoin ETF will be among the few other spot investment products in Canada, such as the Purpose Investments fund debuted in February. Lara Crigger, Managing Editor of ETF Trends, says that an increasing number of spot Bitcoin ETFs in Canada will not change the attitude of US regulators to such products.

When we consider the BTC/USDT pair technically, Bitcoin, which continues to move within the ascending channel that exists as of July 20, is priced around the resistance level of $58.400-60.000. There is no major improvement in a technical sense. BTC broke the downtrend and resistance level marked with blue along with the intraday rises and closed the day below those levels. The sales pressure will continue as long as it stays below the resistance level. 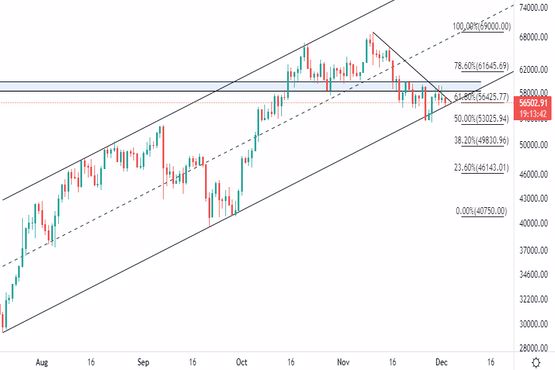 Ethereum lost a 1,65% value during morning hours, and the current price is $4501. ETH opened its positivity flags compared to Bitcoin in the last period. This situation reflects on the ETH/BTC parity. When we consider the ETH/USDT pair technically, ETH broke the downtrend on November 10 and rallied to $4778. And this morning, ETH retested $4451 and found support. If ETH does not break the trend down, the next peak levels will be coming soon. 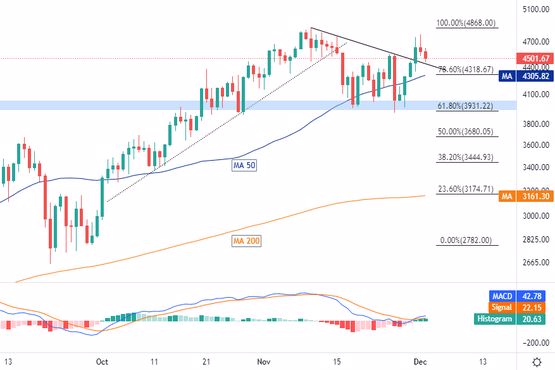 AVAX lost a 2,33% value during morning hours, and the current price is $116,7. When we consider the AVAX/USDT pair technically, AVAX has been continuing its price movement within the ascending channel as of August. In AVAX, which has been priced just above the midrange band for the last few days, persistence is important. The upper line of the channel can be set as a target unless a breakout occurs after a daily close resulting in a retracement. 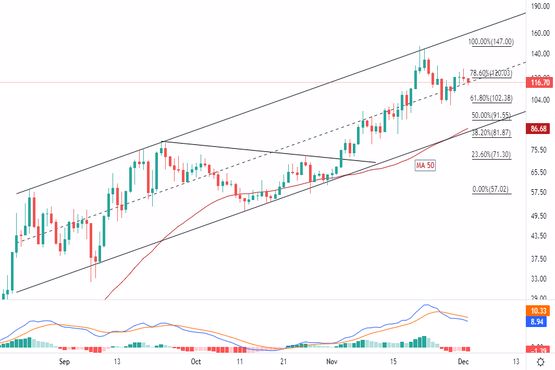 Ripple lost a 2,11% value during morning hours, and the current price is $0,97. When we consider the XRP/USDT pair technically, XRP, which broke the 200MA again in the last days, retested 200MA this morning. Even if XRP tried to break the downtrend, it failed and faced a reaction. For a coming rise, there should be a breakout. 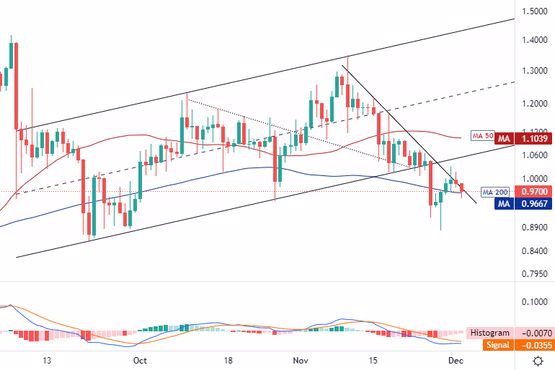 LTC lost a 2,83% value during morning hours; the current price is $203,6. When we consider the LTC/USDT pair technically, Bitcoin continues to move within the ascending channel that exists as of July 21. LTC tried to break the 50MA level for the last three days but faced resistance and closed the day below the 50MA level. As of November 15, LTC dropped sharply. This morning, it retests the downtrend. If it holds above the downtrend, it can surge again after finding support at Fibo'50. 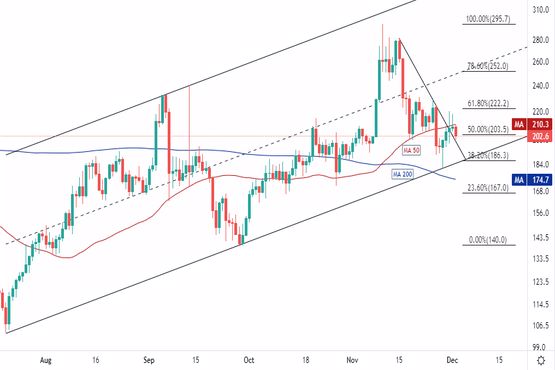 LINK lost a 2,70% value during morning hours, and the current price is $24,57. When we consider the LINK/USDT pair technically, LINK continues price action inside the ascending channel as of August 26 and near the lower line. LINK had broken the downtrend on November 10 but faced resistance from the 200MA level. As a result, LINK has turns back to retest it. LINK hit the Fibo'23,60 tranche. If it holds onto those levels, it can surge along with testing the 200MA. 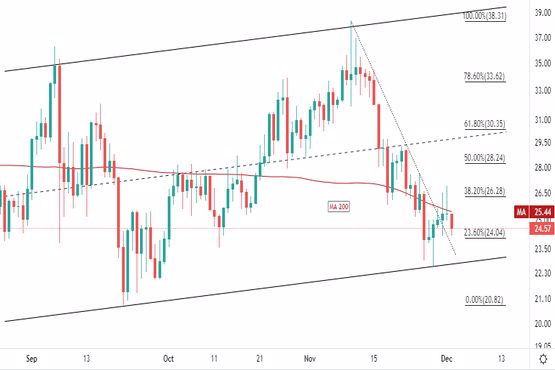 BAT lost 2,46% value during morning hours, and the current price is $1,4176. When we consider the BAT/USDT pair technically, BAT broke the level of $1,473 (Fibo'61,80) yesterday and retreated to the next support level (Fibo'50). It closed the day below this level and is priced around it. Following a sharp rise, BAT faced resistance from the Fibo'78,60 level. Still, MACD gives a buy signal. It should hold above the $1,47, there is no clear upward signal. 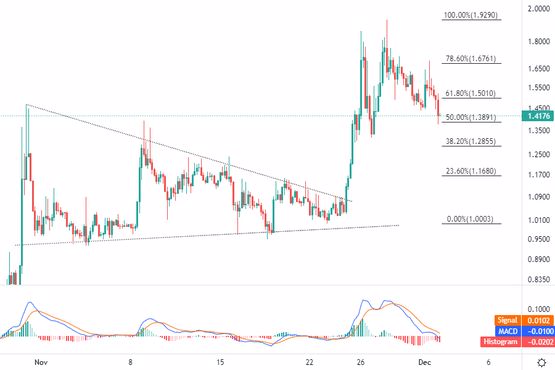