Bank of Japan Is Launching Its Own Digital Currency

According to information from the Japan Times, the Bank of Japan is preparing to launch its own digital currency by 2023. The fact that most of the payments in the country are already made digitally causes the digital currencies to be supported by the Central Banks. In such a period when Japan's institutional investors flock to Bitcoin, Central Banks' initiation of digital money preparations is seen as a very appropriate step.

With PayPal's announcement in October that it would initiate crypto payments, it was rumored that the payment giant would buy BitGo, a cryptocurrency custodian. But now the deal turned out to be a failure. PayPal then started negotiating with Paxos, and if an agreement is reached, users will be able to easily purchase Bitcoin and other cryptocurrencies through the Paxos-powered PayPal digital wallet.

Bitcoin has had a strong rise in the past days, which has made it to reach $ 24,000. In their comments, analysts underline the strong demand as well as limited supply behind this strong rise. "The perfect demand storm is on the ground of a famine unlike what we've seen," said Cole Garner, a BTC analyst, in his comments.

In recent developments, we have often witnessed Wall Street investing in Bitcoin due to the need for inflation protection and the stagnation in other asset types. Recently, a Wall Street veteran and a former White House employee set up a BTC fund with his own investment of $ 25 million, again showing that the demand for the crypto asset is growing.

Ripple Partner Does Not Expect Lawsuit Results To Be Heavy

Financial services giant SBI Group, the top Ripple partner in Japan, shared its views on the Ripple situation, stating that even the worst case scenario will not affect Ripple as badly as thought. Following the statements, he emphasized that 90% of Ripple's customers are located outside the USA.

In statements made by Ripple partners SBI Holdings and MoneyGram about the XRP case, it was noted that SBI Holdings supported Ripple, while MoneyGram denied the accusations. In a statement regarding the SEC case, MoneyGram gave the message that we never needed such financing, claiming that it did not directly use the ODL platform owned by Ripple. His self-laundering defense rather than supporting his partner Ripple did not go unnoticed.

Bitwise announced that they sold all XRPs within the crypto fund and bought them instead of Bitcoin, Ethereum and other cryptocurrencies with a small amount. Bitwise processes more than $ 20 million daily in volume and has a market value of $ 650 million. Before the sale of XRP assets on December 22, XRP accounted for 3.8% of the fund.

The US treasury agency FinCEN has announced a draft law on cryptocurrency payments to prevent people from misusing digital currencies. The digital wallets in FinCEN's new proposals, on the other hand, have the content to report the assets in all kinds of cryptocurrency wallets and keep their records. The goal is to eliminate crimes made on cryptocurrencies.

While Bitcoin has recovered according to yesterday's transactions, but is showing a horizontal image, it is priced around $ 23,600 this morning. After Ripple was sued by the SEC, funds turned to Bitcoin and Ethereum. Accumulation continues in large wallets with 100-10,000 BTC in Bitcoin. He said in a $ 650 million fund statement that he sold XRP that reached 4% of the fund size and bought Bitcoin and Ethereum. For this reason, we find it a positive development that we started to receive demand news soon in Bitcoin. Ripple's distorting effect can provide a positive return on Bitcoin and Ethereum. This may be the main story of a possible Bitcoin rise in the future.

When we consider BTC / USD technically; The OBO image broke down yesterday because $ 22,500 was not broken and we can no longer talk about OBO. It provides a strong image, with it maintaining its insistence on over $ 23,000 in Bitcoin. Still, the peak levels continue to decline after the $ 24,300 peak. If the $ 24,000 level cannot be broken today, this image will transform into a minor downtrend. However, we are still bullish in the medium term and as a secondary trend. Therefore, the $ 22,500-22,700 level will be our major support zone, while the $ 24,000 resistance will be followed above. 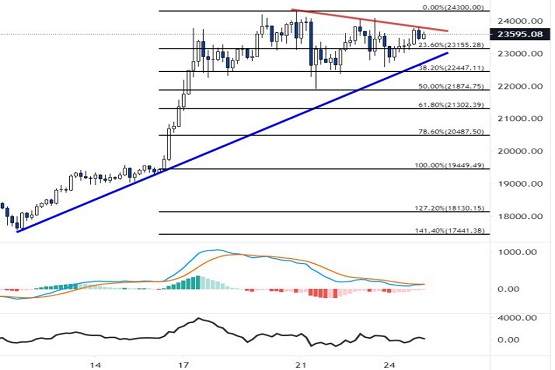 Ethereum is priced at over $ 600 this morning. The amount of ETH locked in Ethereum on 2.0 passes has exceeded 2 million. These ETHs locked on the network will remain there for two years. The size of the locked amount creates a reverse supply effect in the market. Therefore, the increase in this amount in terms of price fluctuations provides a confidence effect. After Ripple's lawsuit, all cryptocurrencies were negatively affected. The SEC, which sued Ripple, had previously said that Bitcoin and Ethereum would not be classified as securities. This rhetoric triggered the entry of funds from Ripple into Bitcoin and Ethereum. For this reason, Ripple's distortion has reversed in the two leading cryptocurrencies. On the other hand, we included Ethereum's market supply information in this morning's Crypto Zoom.

When we consider ETH / USD technically; The uptrend, which started at $ 370 at the beginning of November, broke down after yesterday's break. In addition, a descending channel was formed from the $ 670 level. If Ethereum fails to break the $ 620 level, it will "pull back" towards this old trend and pullbacks may occur as it cannot break the upward resistance. Therefore, if $ 620 is not broken, a short retracement could be in the $ 590-600 band, but the outlook is positive. 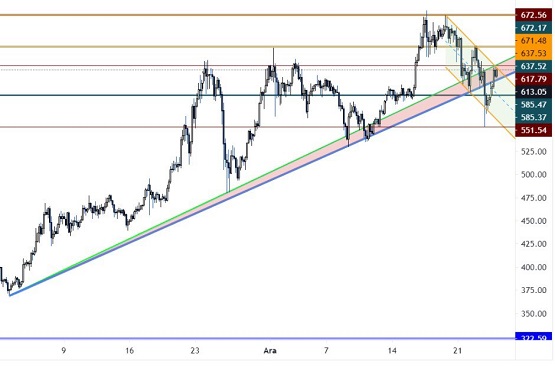 AVAX / USD is pricing at $ 3.00, down 2% on the new day. The pair, which is supported by the $ 2.80 level, has pulled its pricing upwards, but has not yet broken out of its descending trend. The level of $ 3.20 will be followed during the day. The 38.20% Fibo retracement at the $ 3.40 level, which is where it can react, may come into question if it holds onto this level and makes it a support point in upward moves. Nevertheless, we are following a weak course in the pair, which continues to bear a downward trend. 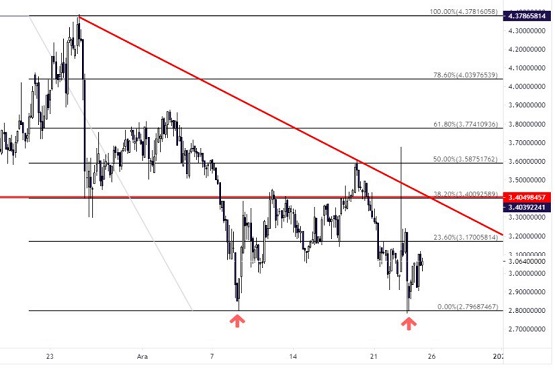 After the shock of a lawsuit against Ripple Company was overcome by the SEC and the market pricing, recovery or reaction movements continue. XRP is flat but positive at 0.4% this morning. As we have mentioned in the Crypto Zoom videos we have taken for the last three days, Ripple is not trying to end here. The only risk is Coinbase IPO, that is, it will be offered to the public. Because if it is off the list by major exchanges, then there will be a risk. Otherwise, a similar case had previously occurred between SEC-Telegram, and Telegram was fined $ 18 million for unauthorized fundraising.

When we consider XRP / USD technically; Double peak formation continues in the diary. Even if it comes up to the $ 0.43 zone in the reactions, there is no significant resistance. Based on this, if the 0.4390 resistance is not broken, the double top formation will continue and the $ 0.20 zone will remain a risky scenario below. Volatile though the outlook is towards recovery. For this reason, let us warn that investors should be conscious and cautious against these movements. 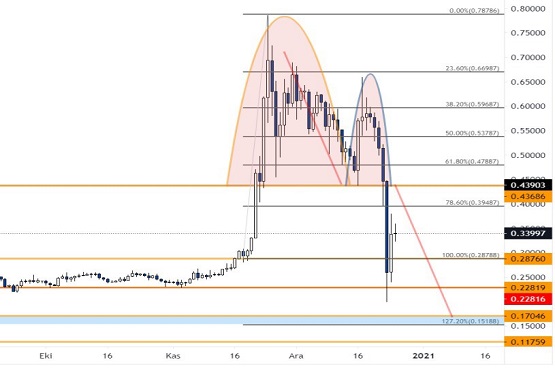 Litecoin maintains its stable course with a daily change of around 1%. Although the LTC / USD pair suffered sales under the influence of Ripple and stablecoins, it diverges positively with a weekly return of 8.5%. Litecoin can be a pioneer in BTC movements with its high correlation with Bitcoin and its volatility. For this reason, Litecoin in technical view and Bitcoin in transactions can be the pioneer.

When we examine the LTC / USD 'parity technically, we see that LTC, priced at $ 110, left the OBO formation and made an upward move, which would affect the continuation of the weak outlook. In case of holding on to the $ 110 support, $ 124 pricing may come to the agenda, but after the $ 124 test, there was a descending channel appearance due to the falling price peaks. Therefore, even if there is no OBO, the formation of the channel can allow us to see intraday turns from the resistances of this channel. Although the level we will follow today is $ 113, this current level will play an important role in breaking the descending channel. 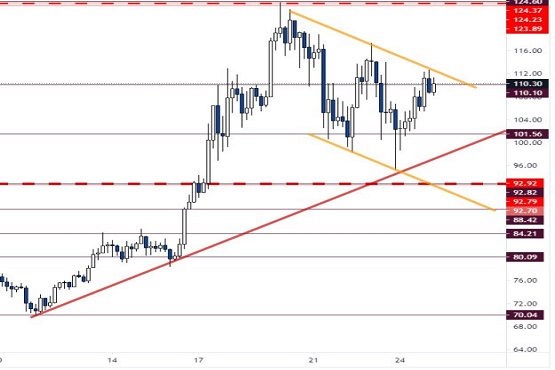 We can say that the LINK / USD parity got rid of the market pressure after the sharp decline in the past days and reduced the downward trend. The tensions between the SEC and Ripple caused sales on the Link side. There is no situation that will affect LINK in the legal grounds of ChainLink, which uses Ethereum consensus. In addition to the fact that the negative developments on the Ripple side scared the LINK investors, when the data obtained are examined, we can see the increase in liquid inflows to LINK in the world's largest stock exchanges.

When we examine the pair technically, we can see that the downward channel formation became evident after the LINK / USD, which was priced at 11.2 levels with a devaluation of 0.2%, after leaving the bullish channel. Although it displays a weak stance in the technical view, we can witness upward moves if it can hold the $ 11.4 resistance level. Although the downward trend is being followed for now, market purchases behind $ 11 give a chance for reaction. 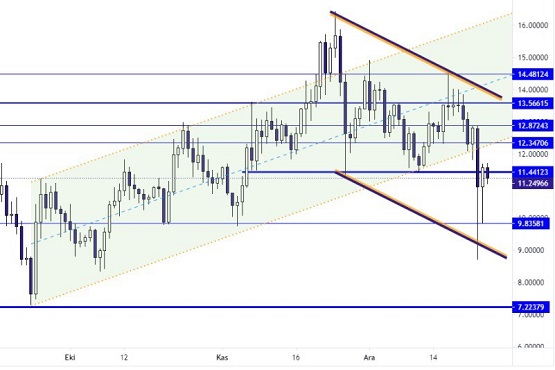 The BAT / USD pair is currently down 1.8%, pricing around $ 0.2100. The pair managed to return to an uptrend after the 5% upside response it gave yesterday from $ 0.1900 levels. The trend level of $ 0.2080 will be followed during the day. If the upward moves continue afterwards, the 38.20% Fibo retracement of the $ 0.2100 level will be decisive for the pair. BAT / USD parity is showing good recoveries, but we can talk about pricing in the lower regions if it cannot hold on to the upward trend that passed from 0.2080. For the pair, Bitcoin pricing and global virus news will be followed, as well as the horizontal trend in the short term. 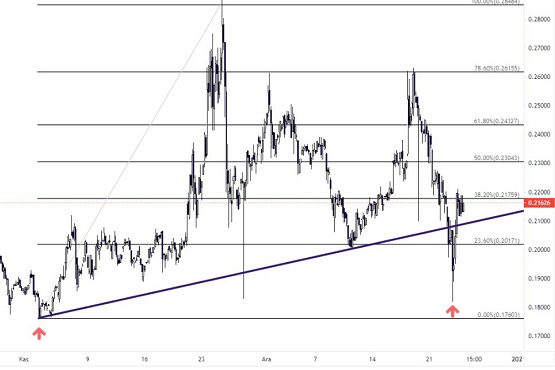