Banning Cryptocurrencies Is Not on the Agenda of Turkey

President of the Central Bank of Republic of Turkey Şahap Kavcıoğlu has stated that there is no ban on cryptocurrencies on the agenda in an online information meeting titled Inflation Report 2021.

In a meeting with investors this week, SBI Holdings CEO stated that Ripple will go public when the SEC case with Ripple is over. Although Ripple did not make an official statement, this was one of the issues the company touched on last year.

A public-private task force has issued a report to the Biden administration consisting of recommendations to tighten the regulations on the cryptocurrencies including Bitcoin. Report suggests that there should be a voluntary share of information between cryptocurrency entities and the law enforcement.

Fantom has completed its Go-Opera upgrade successfully which will enable one-second precision, faster node synchronization and other improvements. The network's FTM token has continued to rise with the completion of the update.

The House of Representatives Approves Bill for Cryptocurrency Regulations

The bill requiring a cooperation between the SEC and the CFTC to better understand and regulate cryptocurrencies has been passed from the Parliament and is now waiting for the approval of the Senate.

The $3.6 billion Bitcoin option will expire today. Buying preferences can have a positive effect on BTC pricing and increase the supply of Bitcoin.

Taxis Will Accept Cryptocurrencies on the Ethereum Blockchain

According to data from CryptoQuant, the total amount of ETH locked in the Ethereum 2.0 contract exceeded 4 million which is eight times the amount required for phase 0 of the ETH 2.0 contract initially.

Bitcoin is trading at $54,350 this morning, up 1.5%. Today is the last day of the $3.6 billion worth of BTC options. The market is a bit more relaxed as there will be a close with the call options predominant. However, using the right of use of call options with the recent purchases of institutions can save the market from the BTC pressure and raise it above the $55.300 level. Although the fact that the House of Representatives grants the SEC and CFTC the regulatory and working authority is a suppressive factor in the first place, the news is not subject to negative pricing for now, since the market reflections are seen as positive by everyone in the medium and long term. When we consider BTC/USD technically, it is seen that the horizontal trend has continued in the last week and it has not been very successful in achieving persistence above the midpoint of $54,300. However, the weekly average DEMA supports the $53,700 level, allowing the price to find support below. During the day, our resistance zone will be at $54,300 and if exceeded, at $55,700. The outlook is positive. 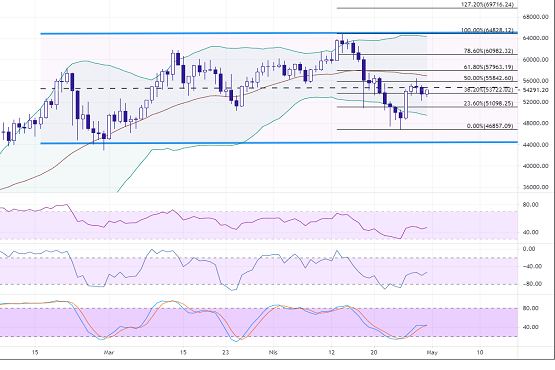 Ethereum is at record highs with a flat gain of 1% this morning. The gap between the number of Ethereum active addresses and Bitcoin's active addresses is narrowing. The ETH-BTC distance exceeded an important level in itself, and the ETH dominance reached 15%. In this respect, the increasing interest in Ethereum is also reflected in pricing.

When we consider ETH/BTC technically, there is a negative conflict between MACD and momentum and price in the 4-hour period. Generally, conflicts can be expected to break down towards the indicator. In such a case, although the level of $2,700 in ETH is seen as a short-term target, breaking the $2,800 level with the rising triangle formation without any progress towards the conflict can quickly bring new records. The main direction is in the uptrend and the outlook is positive as the potential retracements will only be referred to as a short term correction. 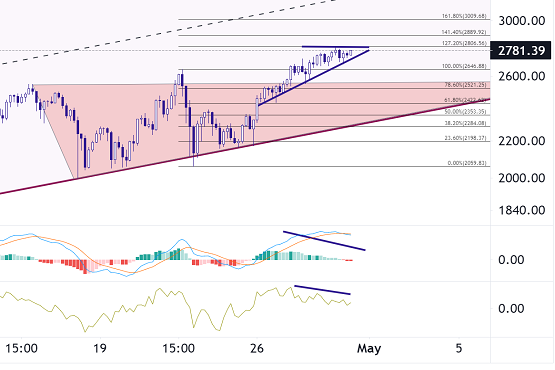 AVAX is up 5% this morning, trying to move above $30 levels, keeping up with the general market direction. The TOBO formation formed in the technical view of AVAX can start with the upward break of the $29.50 level. It will be very important for TOBO to become active and stay above $29.50 in the process towards its goal. For this reason, the support point should be addressed first for the $36.50 target. In the period up to now, the $30.30 level will be the decisive point for the rise as it coincides with the Fibo'50 slice. The outlook is positive. 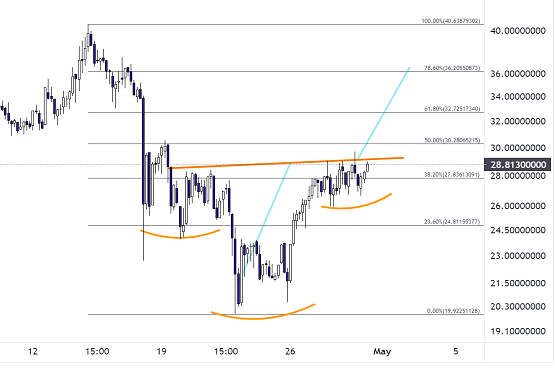 Ripple is up 12% this morning, with prices around $1.57. In the case between the SEC and Ripple, today's teleconference will address the issue of SEC's requesting Ripple records on foreign exchanges. Although the defense strategies of the parties can create predictions for pricing, the positive perception is already increasing. Ripple's new declaration of legal victory could raise investor expectations.

When the XRP/USD parity is technically considered, the parity retreated and formed a cup handle formation after testing the $1.41 Fibo'50 slice. With the breakdown of $1.41, which is the starting level of the formation, the target of $1.80 is formed on the basis of the formation, while the increase has reached 12%. The first significant resistance for the parity is the $1.73 level. In the 4 hour period, oscillators point up and confirm the rise. However, overbought has not started yet. 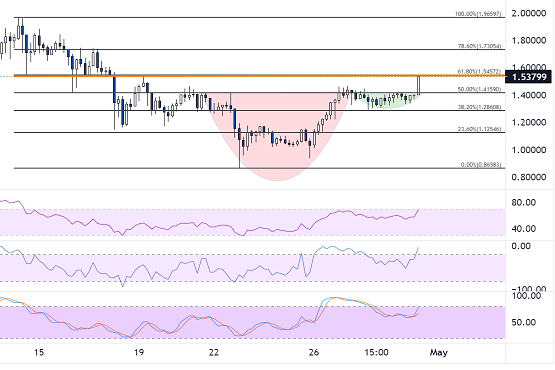 Litecoin is listed at $266 with a 4% price increase this morning. With the realized price target at the highest level in the last three years, the transfer amounts of Litecoin fell to the lowest level on a monthly basis on the last day of the month. Active addresses are on the uptrend with the middle of April. Funding rates showed a noticeable increase with long positions in the correction experienced yesterday.

Technically speaking, the LTC/USD parity was consolidating between $248 and $266, even though the parity ended its downtrend with a $250 break. When the parity, with closures above $265, confirms that the horizontal progress is over, buyers can gain momentum. The first resistance is at $271 in the Fibo'50 zone. The oscillators on the 4-hour chart are positive. 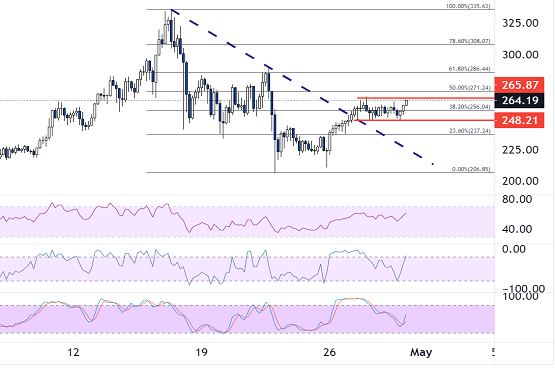 Chainlink is up 4% this morning, pricing at $37.70. LINK liquidity on Uniswap is reaching an all-time high and the demand on Ethereum is also influencing LINK. The amount of LINK on spot exchanges tended to decline and the transfer amount fell to the lowest level of the month. Investors are currently implementing a waiting strategy.

Technically speaking, the LINK/USD parity has pushed the double bottom neckline of $35.00 into support, but the reaction has not yet emerged. While the double bottom target extends around $40.00, the mid-channel of $38.80 appears as the first significant resistance. Oscillators are positive in the 3-hour period and there is no overbought yet, indicator signals say the potential continues. 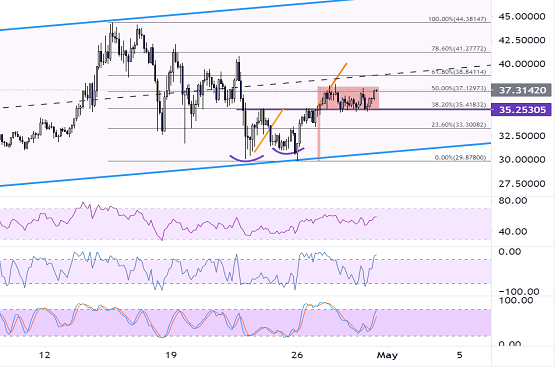 Basic Attention Token is above the $1.22 level, gaining 2.5% against the dollar this morning. Reactions behind the $1.15 support for the parity have been weak lately, with insufficient buyer volume for the double bottom. Although the formation target that reached the resistance of $1.37 continues, the breakdown and persistence will be based on the $1.25 level, which is the Fibo'50 slice where the parity has been pressured before. The consolidation of BAT/USD parity after leaving the downtrend behind is interpreted as healthy. It held on to its support in the BTC-led general market movement and is open to reaction. 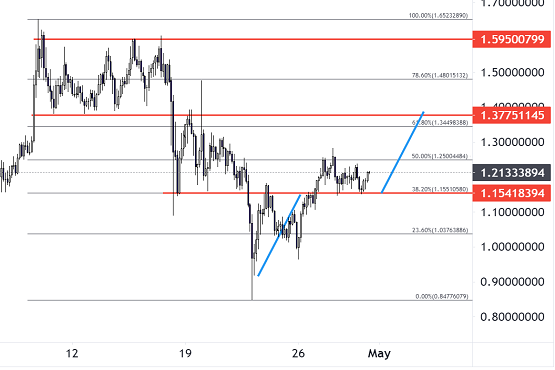