The US Government's agenda includes creating more incentives for employment and better America. The White House press secretary announced that Biden will meet with congressmen and evaluate his new proposal. According to reports, Biden's plan could be a little less than $ 2.25 trillion.

BTC Funds Grow While Gold Funds Are Flat
Bloomberg analyst Mike McGlone has stated that Grayscale's GBTC fund is about to surpass GLD, one of the world's largest gold ETFs. GLD's funds have been steadily flat lately, while GBTC funds are growing rapidly and Grayscale's total assets have exceeded $ 50 billion.

The US Securities and Exchange Commission senate has confirmed Gary Gensler as the new SEC Chair. Being familiar with blockchain and cryptocurrencies, Gensler was the name Ripple executives were also waiting for. Ripple partners argue that talking with the new administration could open opportunities on both XRP and the US side.

Goldman Sachs once again reported that they follow Bitcoin and other digital assets very closely and want to play a role in financial innovations. The reason for this was explained as the bank customers are very interested in Bitcoin.

WallStreetBets Will Be Discussing Cryptocurrencies

Reddit team WallStreetBets, which is thought to have a hand in GameStop's stock prices, is now allowed to discuss Bitcoin, Ethereum and Dogecoin at the decision of the moderators. In the statement made, it has been emphasized that cryptocurrencies are inevitable and delaying is meaningless.

Internet personality Chris Crocker has sold his iconic 2007 "Leave Britney Alone" video as an NFT for $ 44,000.

New Regulation on Cryptocurrencies from the USA

The SEC has published a new regulatory proposal for cryptocurrencies. According to the Safe Harbor 2.0 proposal prepared by the SEC commissioner, the problems encountered in the USA regarding the legitimacy of cryptocurrency projects will be eased and better opportunities will be provided for the projects.

Coinbase has been listed on and can now be traded in Nasdaq which is one of the biggest exchanges in the world. On the other hand, the tokenized version of Tesla shares had been opened on stock exchanges on April 12.

Bitcoin surged up near the $64,900 level yesterday and is pricing in the $62,800 zone this morning. Yesterday, due to Coinbase's IPO on Nasdaq, there was a flow from cryptocurrencies to traditional finance. Due to this situation, short-term profit sales were seen in cryptocurrencies. While the non-premium situation we mentioned in yesterday's on-chain analysis continues, the insistence of Grayscale investors to sell BTC is dragging the premium to the negative and Grayscale cannot open its funds to new investors. On the other hand, it informs us that Bitcoin has 20 points left in the ETH-BTC scissors.

When we consider BTC/USD technically, movements continue in the bullish channel. In addition, if it can stay above the $61,800 level, it will not lose momentum from its movement. While the instability that becomes evident in the morning hours will cause stuttering at $63,000, our midday resistance will also be at this level. The outlook is horizontal in the morning hours, the trend is positive. 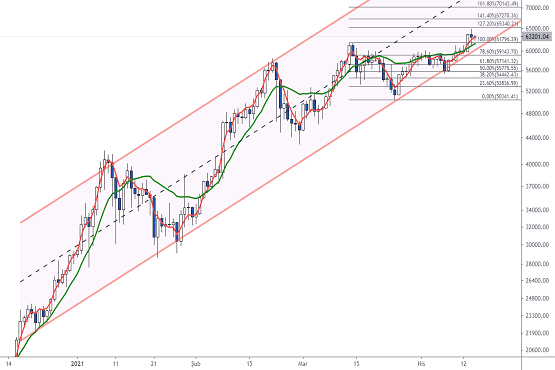 The combination of both economic developments and technical indicators in Ethereum is supported by both sides. Moving from the $2,474 level this morning, Ethereum's monthly return rose to 37%. We think that after the completion of the Berlin hardfork on Ethereum today, network charges will decline and therefore the ERC-20 network could be revived. Stating that Ethereum 2.0 pricing has not started yet, we think that pricing may accelerate after the Berlin stage and Optimism updates.

When we consider the ETH/USD parity technically, the flag formation between $2,300 and $2,430 is targeting the $2,600 level, while the hourly occurrence of this pattern indicates that it may not be a long process in terms of maturity. However, if this bullish image could be distorted, it would take the $2,400 to break down. Therefore, stop loss should be applied in short-term transactions and be cautious. The outlook is bullish and positive. 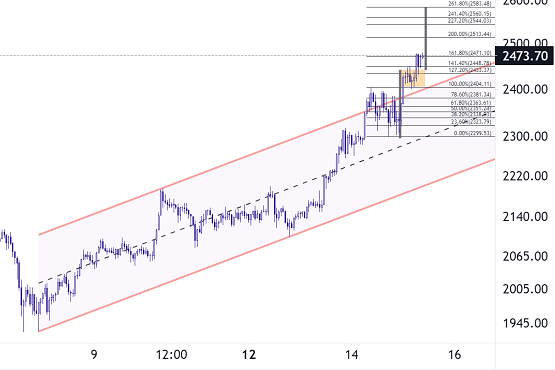 The AVAX/USD parity is in the zone of $39.50 with a 3% price increase this morning. The Fibonacci 50% slice, which corresponds to the $36.50 level, was the critical break zone for AVAX as well as the channel mid-band level. Candlestick closings above this level caused an 11% increase in the parity as a trigger for buying. $37.00 becomes initial support for AVAX and reaction zone for retracements. We can say that the positive course may be more active for the parity that started to price in the middle-upper zone of the channel. Leaving the $41.00 Fibonacci retracement behind in the short-term outlook could bring the $45.50 zone, the upper band of the channel, back into focus. 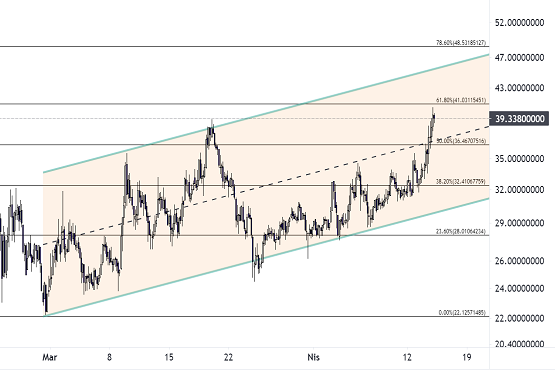 Ripple is pricing around $1.75, with a 4.5% retracement this morning. The long-spoken SEC presidential election ended with Gary Gensler's victory. Ripple executives stated in the statements they made recently that the problems between them and the old administration during the XRP litigation process and that these problems could be solved by talking under the chairmanship of Gensler. Therefore, with this decision, which is very positive for the Ripple team, we are witnessing the ongoing news flow in favor of XRP.

If we examine the XRP/USD parity technically, the downward break of $1.67 for the parity priced around $1.75 may confirm the double peak outlook. Although there is no breakdown for now, prices below the $1.67 zone can create selling pressures up to $1.50. $1.64 is the intermediate support zone. The parity is trying to hold onto the upper channel at $1.75 and could also form a triangle that makes this area a lower support. In this case, sudden price movements and breakdowns can be expected after a period of weak movements. 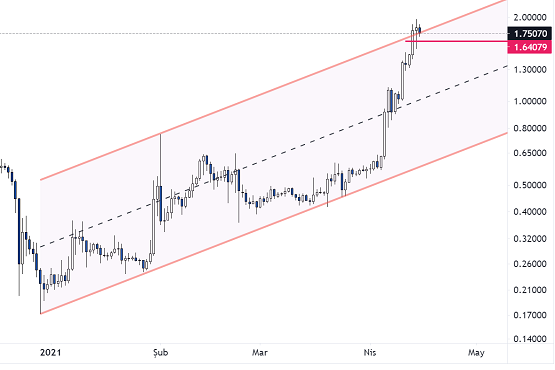 Litecoin is pricing in the $277 zone with a 0.8% retracement this morning. With the public offering of Coinbase and the positive news flow from the SEC, with Bitcoin holding over $60,000, Litecoin also reached its local peak of $283. Litecoin, which performed 22% on the basis of weekly returns and 37% on a monthly basis, is still far from its ATH at $420.

If the LTC/USD parity is examined technically, the parity, which is supported by the Fibonacci 100% slice, which is at the level of $250, increased by 10% and tested $283. The parity, which is in the major bullish channel and minor uptrend, maintains its 8% potential extending to the upper band of the channel at $294. While the $270 level will be the area where it will seek a response in the pullbacks, the first resistance is at $290 in the uptrends. 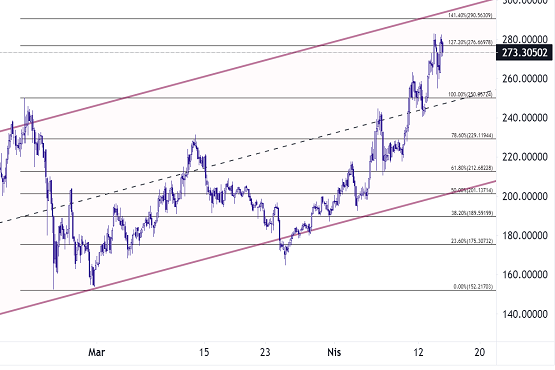 Chainlink is holding on to the $41.00 price zone, experiencing a 1% retracement this morning. Chainlink, which participates in Grayscale's Big Equity Fund, draws attention with Grayscale's purchase of 400 thousand dollars in 24-hour changes. Grayscale is about to overshadow the world's largest gold fund, bringing the value of digital assets it holds to over $50 billion today.

If the LINK/USD parity is examined technically the parity, which is supported by the triangle zone positively by breaking the $34.00 level upwards, is consolidated by reducing the buying appetite for a while around $36.80, an increase of over 14% was seen with the backlash from the $36.90 support. The next resistance is $43.50 for pricing making this zone the main support by closing above the $41.20 level in the Fibo'127.20 zone. We maintain our mid-term target of $60 and find the outlook positive. It is useful to stay away from resistance purchases against pullbacks that may arise from general market movements. 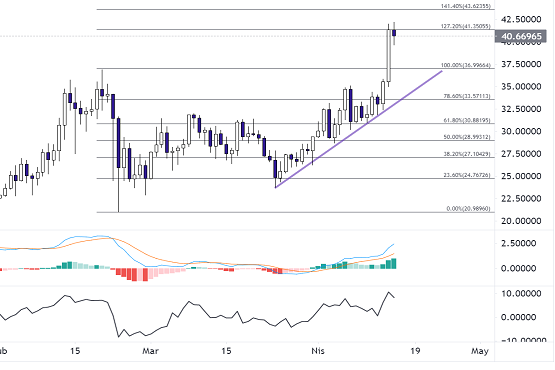 The Basic Attention Token is listed this morning with a price increase close to the $1.47 zone. The parity was stuck in the $1.55 Fibonacci slice and was subject to selling pressures at this level, making its swing up to the $1.38 main support. Response purchases at $1.38 enabled the parity to reach the $1.47 mid-channel again. The parity is consolidating in the 12% band between $1.38 and $1.55, with intermediate support at $1.41. Closings above $1.62 are required for the gains to accelerate. Then, $2.00 pricing can be tested. 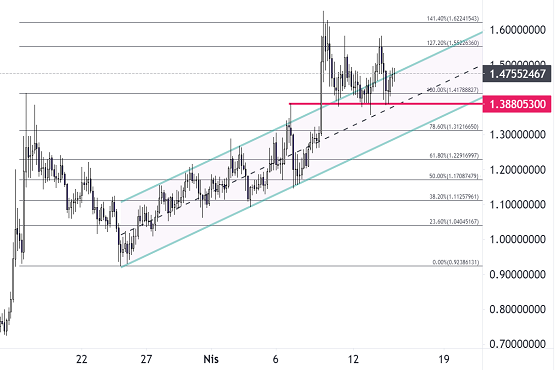