A fund founded by billionaire investor George Soros has supported crypto data provider Lukka in raising $53 million in funds. Lukka is one of the companies that has multiplied its value with the rise of Bitcoin.

The CEO of NYDIG, a New York-based digital asset company, reported that state-owned investment funds are negotiating with NYDIG to buy Bitcoins. The CEO also announced that Singapore's sovereign wealth fund Temasek is a Bitcoin investor.

Call for Regulation from BIS President

BIS President Carstens has stated that the current regulations on cryptocurrencies are not sufficient and called on politicians to introduce more comprehensive regulations. Carstens considers Bitcoin as a speculative asset.

Regarding the cryptocurrency ban in India, blockchain pioneer Raj Chowdhury has stated that banning Bitcoin would be like rejecting the US dollar and seriously damage the country's economy. The Central Bank of India has also made a similar statement about the ban in India.

Chicago Board Options Exchange, one of the largest cryptocurrency exchanges in the US, had been the first official institution to launch BTC futures in 2017 and later in June 2019 it announced the fund was closed. In a recent announcement, CBOE has stated that it wants to develop a new product and reopen Bitcoin futures.

The number of Bitcoins withdrawn from trading platforms is rapidly increasing. According to Glassnode's share, the price of BTC that is open for trading in liquid form has been decreasing continuously since the beginning of the year.

The US Court accepts Ripple’s documentation request from SEC regarding why it considers BTC and ETH as non-securities. A telephonic conference has been scheduled by the US court for April 6 for the documentation control.

Bitcoin is trading at $52,800 this morning with a gain of close to 3%. While there is no basic data to support the sales pressures that have occurred in the last few days, the amount of Bitcoin transferred from exchanges continues to increase. On the other hand, there is an increase in wallet balances with the individual demand for Bitcoin. The record high Bitcoin options worth $6 billion will expire today. The psychological pressure it has created may have been the subject of the sale, but it is not a strong enough topic to put this month into its season. After the Bitcoin ETFs, we also find the news that CBOE can re-list for Bitcoin options after two years is positive in terms of the deepening of the market.

When the BTC/USD parity is technically analyzed, the downward trend continues significantly. By contrast, the strong reaction from the $50,200 level turned the view here into the channel. Alongside this, the behavior of the oscillators at the $50,200 level also showed the oversold and confirmed the upward reversal. In the current plane, for Bitcoin to be stronger, it must permanently break the $56,000 upper channel. The correction is likely and the outlook is moderate. 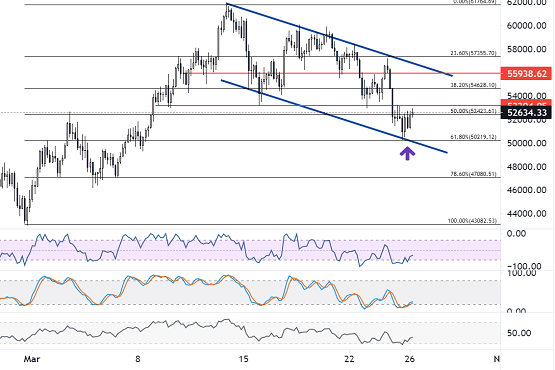 Ethereum is trading at $1,620, up 2%, keeping pace with the general market movement. After the Optimism mainnet was postponed to July, eyes will be on the Berlin hardfork, which is expected to be processed in mid-April. Although high network charges and scale problems affect Ethereum prices, the eyes will be turned on the date April 1. Today, $1.15 billion worth of ETH options will also expire. Miner attacks, both today and April 1, have priced the scenarios on the agenda so far. Out of expectations will be seen and priced at that time, but Ethereum has bottomed at $1,550 in the current outlook.

When the ETH/USD parity is technically analyzed, it holds on to the major uptrend at $1,550 and here comes the short-scale response. As the last declining trend passes from $1,670, which corresponds to the Fibo'50 level, the accelerated movement will be difficult without breaking this point. Therefore, it may be a more accurate trading strategy to wait for this level and observe the volume in Ethereum. 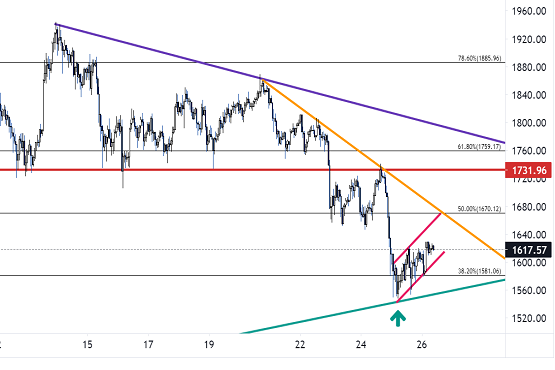 The AVAX/USD parity is pricing around $27.40, up 6% this morning. The uptrend that has been going on since February 28 has lost its effect when the parity dropped below $28.00. In order for the parity, which gains 6% value on a daily basis, to re-enter the uptrend limits, another 3% rise will be required. Then, we can define the $28.00 zone as the level at which expectations for a new reaction will occur. The first resistance of the parity is $31.30 in Fibonacci's 23.60 slice. As long as the general situation of the market is not negative, AVAX will maintain its potential as long as both the developments related to its own project and successful collaborations continue. 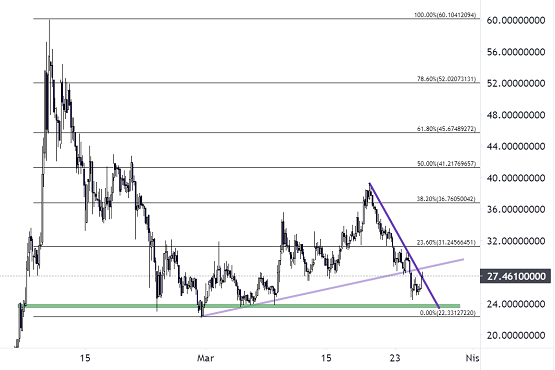 Ripple is pricing at $0.53, up 4% this morning. The lawsuit process with the SEC has been a new development, and the parties' teleconference to be held on April 6 was decided to present the contents they document to the court. The SEC will also report and submit to the judge why it does not accept Ethereum and Bitcoin as securities. Thus, Ripple will be able to broaden its defense by comparing whether XRP is a security or not with ETH and BTC. On the other hand, transfers from Jed McCaleb and Ripple's wallet to exchanges continue, generating massive XRP sales. The altcoin market suffered serious retreats as BTC tested $51,000 the previous day. XRP has quickly recovered its losses in the process today.

When the XRP/USD parity is technically analyzed, the triangular zone formed by the combination of the uptrend and the longer term downtrend is preserved. Although the parity retreated by 20% the previous day, the response arising from the $0.46 uptrend support brought a 17% increase in value. Although the congestion outlook is an accelerated movement signal for the parity, it does not suggest whether it will be positive or negative. For this reason, we will follow the triangle breakpoints and Fibonacci levels. The Fibo'61.80 slice at the $0.53 level comes first resistance followed by the $0.57 downtrend. With the break here, we can see accelerated movements in the upward direction. 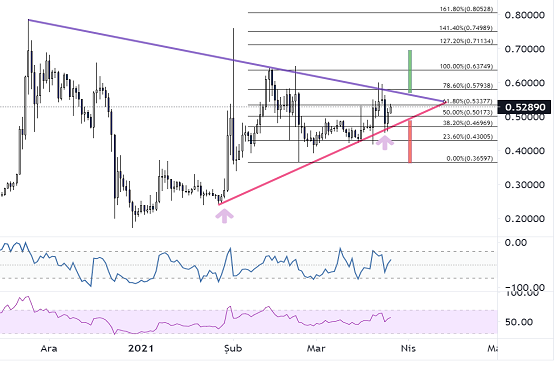 Litecoin, along with Chainlink, showed no reaction to the rise. Litecoin, which increased by 1.37% this morning, diverged 3 points negatively from Bitcoin. While we haven't seen a clearer recovery signal yet, momentum and MACD bottoms have begun to recover. However, for a definite rise, it must first return to the old bullish channel and maintain a persistence above $190. The descending trend is at $216 and the bullish channel mid-band is at $226. While Litecoin is horizontal for now, it is trying to maintain permanence in the support zone. It may be more accurate to expect prices that are currently idling to hold above $180 and see it in the channel. 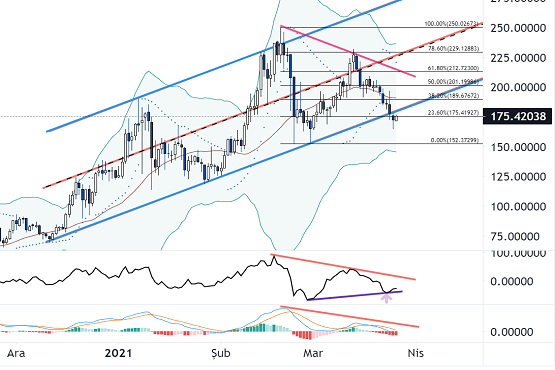 Chainlink is pricing around $25.60 this morning with a horizontal change. LINK, which is 10% behind on monthly returns, is 15 points negative on a weekly basis. When looking at the on-chain data, it is seen that the amount of LINK withdrawn from the exchanges has decreased to the lowest level of the last 5 months. However, as the volume of recipient addresses has decreased, we attribute this to the recent loss of interest on the LINK side. Nevertheless, while the amount of smart contracts on Chainlink is increasing, developments on the project side continue.

When the LINK/USD parity is technically analyzed, the parity lost its price by 10% after falling to the next support level of $24.80, failing to hold on to the uptrend at $27.50. Although the reaction that followed led to the testing of $26.50 again, the parity that was pressured here has retreated a little. While the nearest support level is again $24.80, oscillators are not giving a bullish signal yet with their bearish ends. 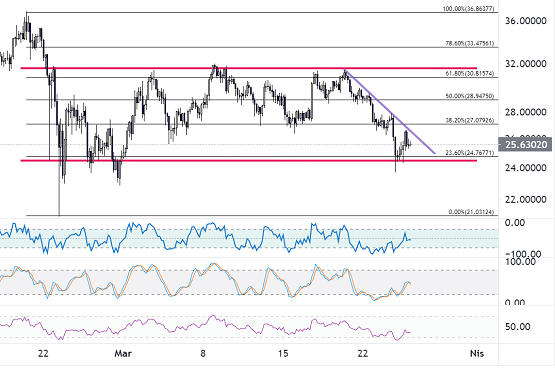 Basic Attention Token is pricing at $1.00, up 3% this morning. The previous day, after the market correction under the leadership of Bitcoin, there was a 15% retreat for Basic Attention Token. On the other hand, the bullish reaction from the $0.95 main support led the parity to move towards buying again. In the current triangular outlook, the first resistance zone is $1.05, and candlestick closings above this level may bring the $1.07 level in the Fibo'50 slice to the agenda in the short term. Then we will follow the $1.15 and $1.35 Fibonacci retracement levels as resistance. On the other hand, the parity, which rose after Grayscale added BAT, consolidated somewhat after not seeing the demand expected by Grayscale. However, Grayscale suffered a general loss in customer demand as it stopped buying Bitcoin. Therefore, potential targets for BAT may increase if purchases are reactivated. In the current view, BAT can revert to a descending triangle formation. It has to break $1.10 to break it. So it might be a prudent trading strategy to see $1.10 break to take action. 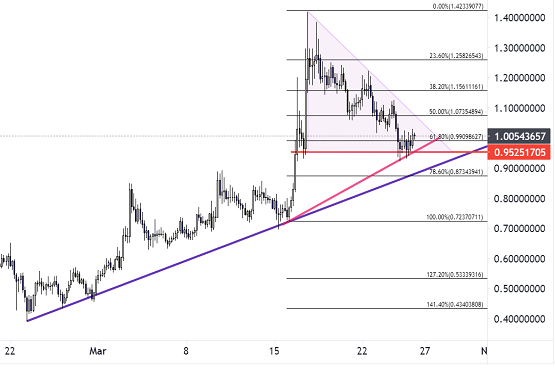