Bitcoin and Ethereum are Safe

Since 2015, the SEC has found that Ripple's CEO, as well as his wife, have sold large amounts of XRP. It is stated that the CEO and his wife earned more than $ 450 million in XRP sales. In addition to these accusations, the SEC emphasized that Ripple's senior executives are selling XRP at special prices to anyone who wants to buy without any restrictions.

Two cryptocurrency exchanges operating in the US and Hong Kong-based OSL removed XRP from the list without waiting for the outcome of the lawsuit. In the statements made, the uncertainty of the XRP situation was emphasized. After the lawsuit decision, those who did not list Ripple in Bitwise joined the caravan and stated that in the event of a possible security decision in the case against XRP, the overall earning rate of the fund could drop sharply.

Risk Of XRP Announced As A Security Is Rising

The SEC stated that XRP has recently been used only for sales and has not been used in real terms. This is seen as a reason that increases the risk of XRP being declared securities. SEC had previously stopped Telegram's sale of GRAM tokens and declared GRAM as a security with the same allegations. SEC's decisions and statements point to a similar end for XRP.

The SEC met with Coinbase, one of America's largest cryptocurrency exchanges, after its trial with Ripple. Emphasizing that Ripple should be taken off the list, the SEC wants Coinbase to end transactions related to XRP, as well as exchanges that have already taken Ripple off the air.

Stablecoin Report from the USA

US financial regulators published a report to prevent money laundering. In the report, the Treasury Department and other institutions stated that they should be used in a way that "effectively manages risk and maintains the stability of the US 'local and international financial and monetary systems." Stablecoins are said to be securities, derivatives or commodities depending on the specific characteristics of a particular asset, according to the statements in the report.

GrayScale, one of the largest investment funds in the world, received more than 12 thousand Bitcoin in 24 hours on December 22. The company, which has been on the agenda frequently with its record digital money funds, has exceeded $ 13.5 billion in BTC investment products. The shortage of supply and cold wallets created were welcomed very positively in terms of Bitcoin prices.

Bitcoin is trading at $ 23,000 levels this morning, with downside movements close to 1%. It has a 1% plus in weekly returns. The SEC also issued a statement for stablecoins after Ripple. We gave a wide coverage in the news section, but the statement that Bitcoin and Ethereum are not securities positively differentiates Bitcoin in terms of pricing. Bitcoin dominance, on the other hand, seems to be delaying the altcoin season as it rises above 70%. However, we see institutional investors entering via Grayscale. There were 12 thousand entries in a single day the previous day, and 8 thousand entries yesterday. Ongoing demand keeps Bitcoin prices within the $ 23,000 limit.

When we took the BTC / USD technically, the OBO outlook started to form, but it didn't start as the $ 22,500 level did not break down. The current level also coincides with the Fibo'38.2 retracement level. Therefore, the break of this point may increase the pressure towards the $ 21,300 levels (Fibo'61.8). Because the OBO target is also exceeding the $ 20,800 levels. The outlook is horizontal but the uptrend continues from the $ 22,500 level. 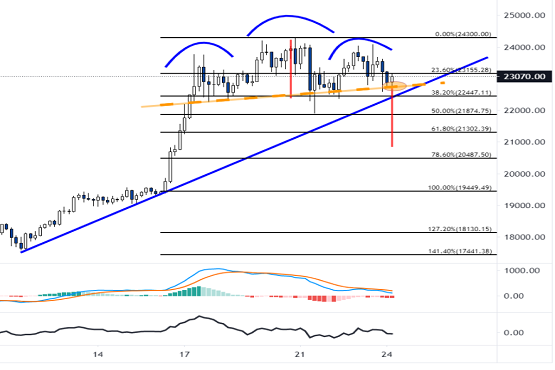 Although Ethereum retreated to $ 550 levels yesterday evening, it reacted upwards near $ 40 as a result of the immediate reaction. There are some developments regarding Ethereum prices that could evolve to some positive. First of all, the amount of outflow in Grayscale Ethereum fund ETHE is decreasing. Since it has not turned positive yet, we cannot comment that action may start soon. However, the easing of sales pressure creates an expectation for the future. On the other hand, traffic for the Ethereum network continues to increase. Transaction fees are rising on demand. However, the amount of ETH offered by miners for 1-3 months is still hovering at 3-month highs.

When we consider ETH / USD technically, this region was supported as a result of the reaction from the $ 530-540 band. Although the uptrend started to deteriorate, the 'below the stomach' candle formation in the $ 670 region pointed to downward pressure with a probability of 60%. What happened was that the target of this region was also taken. Although we see that the pressure increased a little more with the weakening of the upward trend, the reactions in the $ 530-540 region can be followed. Although the short-term uptrend is broken, we are still in an uptrend as a major. 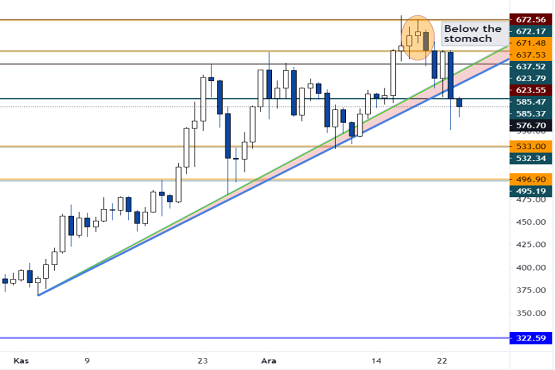 AVAX / USD started the day at $ 2.91 with a 2% loss in value. Although it violated the bearish channel upward with a sudden uptrend at noon as it started to be listed by new exchanges yesterday, the immediate reactions could not make it leave the downtrend position. We have said that the $ 2.80 level is critical for AVAX recovery. Likewise, we continue to watch the reactions from here. Still, a weak motion will be followed in the parity, whose downward trend continues. 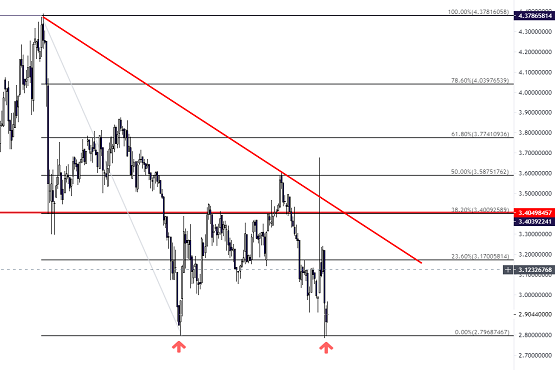 We see that XRP fell from the $ 0.60 zone to $ 0.24 with a record drop of 53% on a weekly basis, following a 20% depreciation due to its lawsuit with the SEC. When the data obtained are analyzed, the sale of XRPs by large and institutional investors gives signs of distrust for the future. In addition to the removal of XRP from some listed exchanges, with fears of loss, many exchanges halt the purchase and sale of XRP because they do not want to risk other funds. The situation will not be good for Ripple, as the risks that the money collected during the XRP ICO will be considered securities by the SEC. The SEC had previously received $ 18.2 million in compensation from the company, ceasing all functions of Gram's Telegram digital currency for similar reasons. Ripple's investors are increasing the selling pressure with fear, as a similar situation has been experienced with Telegram before. On the one hand, the fact that the Ripple CEO and his wife have also made large sales is unlikely to create a positive atmosphere. However, the CEO of Ripple emphasized in his statement yesterday "Don't worry, we are right, we will win". Although we are watching the course of the lawsuit, it seems difficult for XRP to compensate for its losses in line with the negative developments.

When we consider XRP / USD technically, hard losses continue. The rise in November started from the $ 0.22 zone and the March lows were in the $ 0.11 zone. For this reason, it is useful to take a look at the past pricing on how much further it can drop. The technical and basic outlook is poor. On the hourly chart, we see that the responses are very poor. 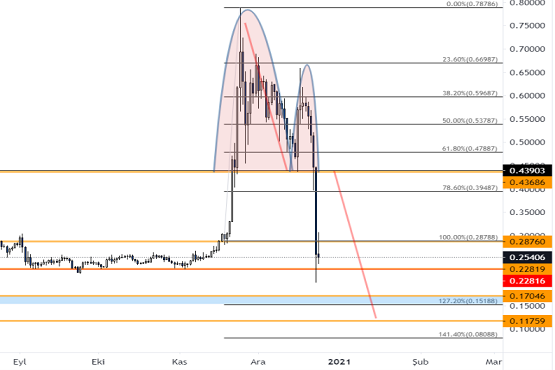 Litecoin continues to diverge positively in weekly returns compared to Bitcoin. Although there is a 0.5% sell-off this morning, it is 2 points ahead of BTC with 2.5% weekly returns. Its high volatility and high correlation can allow it to act before BTC and become a role model for BTC. The market continues its negative course under the influence of Ripple and stablecoins.

When we consider the LTC / USD technically; The OBO outlook formed and started with the downside break of the $ 105 level. From now on, upside reactions will remain as 'pull back' unless they break the $ 105 level and may not be valid, permanent. OBO pattern extends below $ 84-88. Still, it is worth mentioning that the major direction is in an upward trend, although there is a risk of retraction in the short term. It seems unlikely for now that retreats will evolve into a new bear cycle. 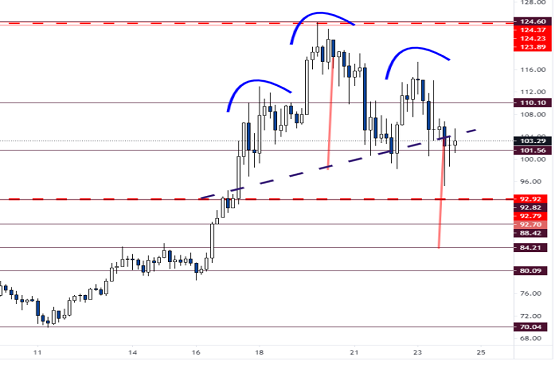 LINK / USD diverged more negatively from market pressure during last night, falling sharply and suddenly to the $ 8.70 levels. The SEC's lawsuit against Ripple and the subsequent SEC's declaration pointing to stablecoins brought hard sales during the night. LINK raised capital at 1 Ether = 2600 LINK during the ICO and does not have a similar stance to Ripple as Ethereum is a foundation. For this reason, there is no extra situation that can negatively decompose LINK.

Technically, the weakness became very apparent as it broke down the bullish channel, and even a downward and wide-walled channel was formed. The $ 9.00 level is the lower band of the channel. 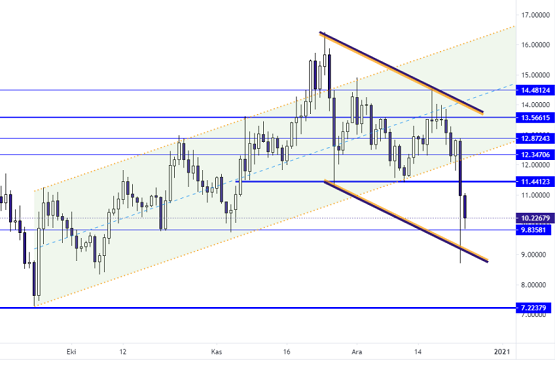 BAT / USD parity is priced around $ 0.2000 with an increase of 5.5% as of morning hours. Yesterday, after declining to the $ 0.1930 levels during the night hours, the pair showed a 5% upside reaction to the $ 0.2000 level, showing that it can react there. In terms of the project, it has a potential for the future as they are engaged in digital marketing and trade in a possible second quarantine period. The $ 0.2200 level where the 23.60% Fibo retracement has passed may come into question if it continues to rise with strength from the trend support. However, since its correlation with Bitcoin is still strong, the situation for BAT offers a more flat view in the short term unless we see positive movements on the Bitcoin side, while news of possible quarantine and virus mutation are closely followed. 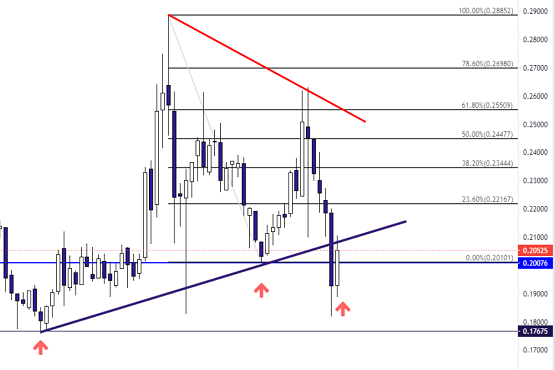