Bitcoin and Ethereum Fund Entries! LTC and LINK in the Forefront

Another Lawsuit Against Ripple

Another Crypto Exchange Joins Among Those Who Delirious To XRP

Blockchaincom has also joined those who stopped XRP transactions due to the SEC and Ripple lawsuit. The stock exchange announced in its official statement that it will stop trading XRP as of January 14.

In its quarterly report, Grayscale announced that they have disposed of large amounts of XRP, which constitutes 1.46% of the fund called the Digital Large Cap Fund, and replaced them with Ethereum, Bitcoin and other cryptocurrencies.

Analysts of JPMorgan, one of the most prestigious banks in America, stated in their statements that there will be positive changes in the Bitcoin market with gold investors looking for alternatives in the long term for a few years. The calculations made announced that if the money transferred to gold ETFs is transferred to Bitcoin, it could grow by 4.6 times and this corresponds to 146 thousand dollars.

SkyBridge, one of the leading hedge funds, has officially announced that it has allocated $ 310 million of its $ 3 billion fund under its management to the Bitcoin fund. SkyBridge's announcement came right after Bitcoin's 34,000 record.

With more than 20 exchanges dropping XRP off the list, fewer trading pairs are now left for XRP. As a result, the remaining stock markets may have to stop trading for the reduced liquidity and the XRP that cannot be traded.

One of the Largest Cryptocurrency Investments in History Has Been Made

A new one has been added to cryptocurrency investments, which have become a trend for companies. Coinbase, a San Francisco Stock Exchange, announced that the One River mutual fund made the largest cryptocurrency purchase in history.

Bitcoin broke the all-time record during Asian hours this morning, testing the $ 35,868 level, pushing the $ 36K levels. We welcome the continued interest in BTC, which increased by 3% this morning, with the purchases of funds, the reports released. It was good news that JP Morgan announced Bitcoin as digital gold, and Grayscale liquidated its XRP funds and transferred the majority to the BTC fund, in addition to the U-turn 3 years later with the goal of $ 146,000 BTC. In addition to the news, SKYBridge Capital's announcement that Bitcoin will catch the market value of gold and rise to $ 535 thousand were the fundamental and news developments that brought the all-time record. Therefore, six full upswing pleased the market, made it sure.

When we consider BTC / USD technically; In addition to the steepness of the slope and the parabolic rise, BTC's rapidly moving away from support makes technical interpretations difficult. While our intraday support defines a broad band of $ 32,300 and $ 33,300, it should be noted that Bitcoin transactions are more intense during European and US hours. For this reason, we would like to state the possibility that this interest in Asia may increase, where transactions may accelerate later in the day. 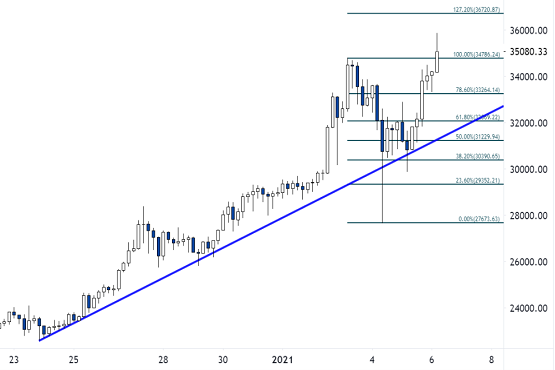 Ethereum finally gave what was expected in weekly returns and opened up the return gap with Bitcoin. Priced above the $ 1100 level this morning, ETH / USD has provided a 46% return to its investors in the past week. It was positive news that Grayscale liquidated the XRP funds and said it will transfer it to Ethereum funds. In addition, interest in Ethereum has decreased slightly due to the rising gas fees in the recent period, but we can say that the interest has revived after Vitalik Buterin, the founder of the Ethereum Foundation, stated that the fees will decrease with the update.

When we consider ETH / USD technically; A rising triangle formation occurred as a continuation of the trend in the pair trying to break the $ 1100 level. In order for this break to be completed, the level of $ 1150 must be broken upwards, which corresponds to the triangle size of $ 1340 after this break. While the outlook is horizontal for now, the trend is moving in a positive direction. It is necessary to follow the break of the $ 1150 level, the reactions that may come from the uptrend in the pullbacks or the purchases that will accelerate with the break of the resistance. 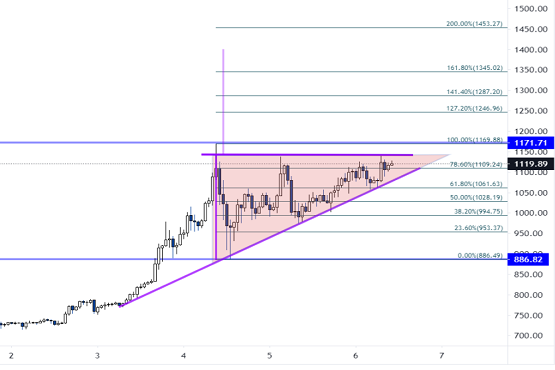 Although AVAX / USD gained close to 6% this morning, if we add yesterday's earnings, it rose by almost 35%. Due to the insufficient depth of the AVAX's stepping board, it can move quickly in loaded operations. In addition, we see that the technical levels are not working very much. Still, when we examine it technically, the level of $ 4.16, which corresponds to the Fibo'61.8 slice, appears as the support and retracement level. If possible corrections turn into a bullish channel after a rapid rise, the $ 3.70 levels coincide with both the lower channel support and the Fibo'38.2 retracement level. $ 4.70 channel upper band. 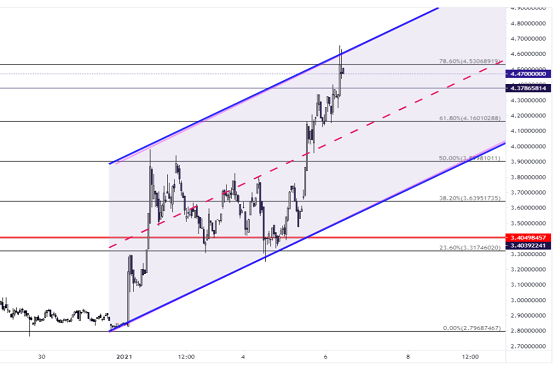 The XRP / USD pair is priced around $ 0.22, down 0.5% on a daily basis. Although there are small upward movements in the parity, which is still with sellers, it continues to be excluded from the list by the stock markets, eliminating the macro outlook expectations. The decreasing number of platforms where XRP transactions are made, decreases liquidity and forces the remaining exchanges to stop XRP transactions. The fact that Grayscale, one of the largest investment funds in which XRP is involved, disposed of its XRPs and filled the gap with other cryptocurrencies added another reason to XRP's reputation, which has been severely damaged recently. On the other hand, Tetragon Financial Group, which has greatly increased the value of the company by investing heavily in Ripple, has also filed a claim against Ripple to the extent that it invested. If the request is not fulfilled, Ripple requested that its assets be frozen.

When we examine the XRP / USD parity technically, we see that the price is below $ 0.24 due to the fact that it has tested the $ 0.24 level after the double peak it formed, but we did not get a confirmation. Although it creates small peaks and lows with movements between the $ 0.21 - $ 0.24 band, it seems difficult to get rid of the selling pressure unless it breaks the $ 0.24 resistance. 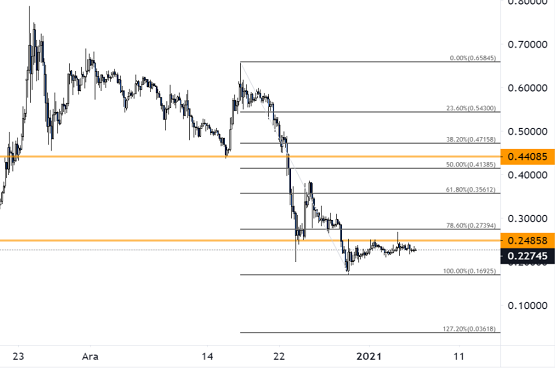 The LTC / USD pair is priced around $ 162 in the morning, up 2% on a daily basis. With a weekly return of 25%, LTC closes the gap between other cryptocurrencies with a large market value. In addition, the correlation with Bitcoin at the level of 0.97 and the rise in purchases and record levels with institutional investors on the Bitcoin side increases the power of Litecoin in the macro view, reinforcing its upward potential. One of its corporate acquisitions was Grayscale mutual fund, one of the largest mutual funds. By selling the XRPs of the fund instead of adding Bitcoin, Ethereum and Litecoin to the basket, Litecoin, which increases its corporate reputation, makes it enter the frame of big companies.

Litecoin's increasing power in macro view is also reflected in its technical chart. We said that the $ 145 level should be followed in order to get confirmation after the double bottom formation it created. LTC, priced at $ 162 at the time of writing, shows that the expected confirmation as of January 4 is given. As long as it does not drop below the $ 145 support, it will maintain this target. Within the boundaries of the rising channel formed by the pair with a double bottom target of $ 270, it is seen that it has moved towards its target of $ 270 with small retreats. As long as the rise is mainly supported and interest in altcoins continues, we can say that the $ 270 gate is open for LTC. 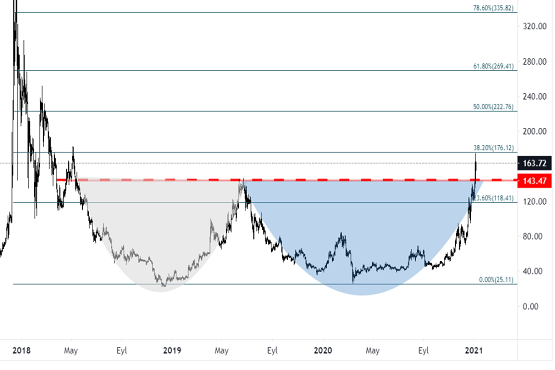 Although LINK, which we have covered in our Crypto Zoom program this morning, follows a horizontal course against the dollar, it is trading at $ 14.50. We really like the performance of LINK, which came in at $ 11 in the last week. In addition, we expect it to catch up with ETH in weekly yields, at least the 20-point yield shear in between. The most important supporting point of this is that the ETH / BTC scissors have evolved in favor of ethereum and LINK is an EThereum consensus token. On the other hand, LINK has been the champion of returns for the past two years; a token that grows its projects in a way that deserves it. The amount of tokens in its structure has exceeded $ 7 billion.

When we consider the LINK / USD parity technically; We see that the descending trend, which came from the $ 20 level in August, crossed the $ 15.00 level with the current slope. While the double bottom target crosses the $ 15.60 levels, there is a 20-point range of movement towards the $ 18 levels if the LINK-ETH shears close. The outlook is positive and if the downtrend breaks through the $ 15.00 level, movements could gain momentum. 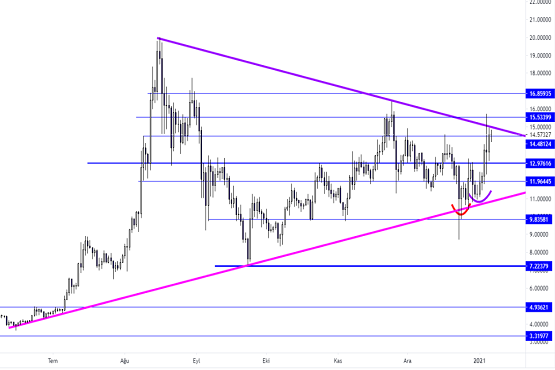 BAT / USD has been idling for the last two days and stuck at the resistance of $ 0.23. BAT / USD, which formed a declining trend in the last month after approaching the level of $ 0.29 in early December, will continue to weakness as this trend continues. First, the Fibo'50 correction, which is the level that we can say ok or continue, is passing at $ 0.2320. In order to break the trend, it must break the $ 0.24 level in order to accelerate the purchases. For now, the appearance is under the descending trend. The $ 0.22 level is in the support position in the pullbacks. 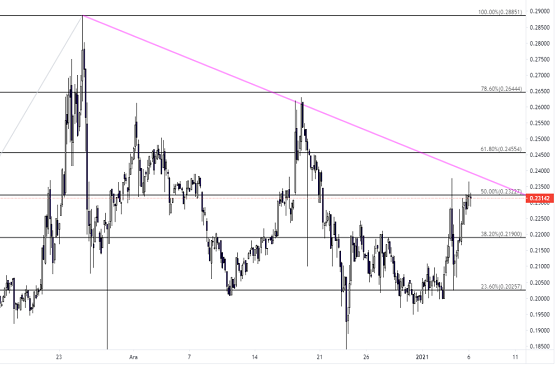