Today, the Ukrainian Parliament passed a law legalizing and regulating Bitcoin in the country. The draft law, drafted in 2020, was passed with only six parliamentary votes, compared to a total of 276 votes supporting the legislation.

CoinShares Expands Access to Bitcoin and Ether ETPs
CoinShares announced on Wednesday that the company was expanding its European services by listing two physically supported stock exchange-traded products on the Euronext exchange in Paris and Amsterdam.

The third-largest Bitcoin wallet is buying into the lows of the recent downturn, which it sees as an opportunity. During the current market downturn, it added almost 500 BTC to its whale assets.

A former federal prosecutor said "the SEC will not give up anything to control the entire cryptocurrency space." The SEC has now threatened to sue a cryptocurrency exchange listed on the Nasdaq.

Gabriel Silva, an independent panamanian lawmaker, has submitted a bill to the country's national assembly. The proposed legislation would create regulatory guidelines for Panama on crypto assets to encourage the adoption of blockchain technology.

In a report filed with the SEC, fund managers at Bill Miller's hedge fund, the Miller Opportunity Trust, say "Bitcoin has significant potential for a rise as a form of digital gold." Despite its volatility, Bitcoin's "risk-reward is attractive," the report details.

Renowned Bitcoin mining equipment maker Bitmain is preparing to expand its mining capacity in North America with its latest deal. The company has struck a deal with data center and power partners Bit5ive and ISW holdings, which will host 56,000 Bitmain mining equipment.

Bitcoin, which has a horizontal price movement in the morning, is priced at $46,036. Today, the Ukrainian Parliament passed a law legalizing and regulating Bitcoin in the country. The draft law, drafted in 2020, was passed with only six parliamentary votes, compared to a total of 276 votes supporting the legislation. However, the third largest Bitcoin wallet is buying the lows of the recent downturn, which it sees as an opportunity. During the current market downturn, it added almost 500 BTC to its whale assets.

When we consider BTC/USDT parity in technical terms, BTC, which has been retreating towards its 5-day moving average for the past 2 days with the withdrawals starting from $52,944 yesterday, has achieved daily closes above its 200-day moving average with the support it has found from this level. The trend will continue upwards unless the 50-day average is lowered at BTC, which closes daily below the $46,849 level that corresponds to the Fibo'50 tranche. Although the metrics in the daily period signal a sell, there is a recovery in 1- and 4-hour metrics. 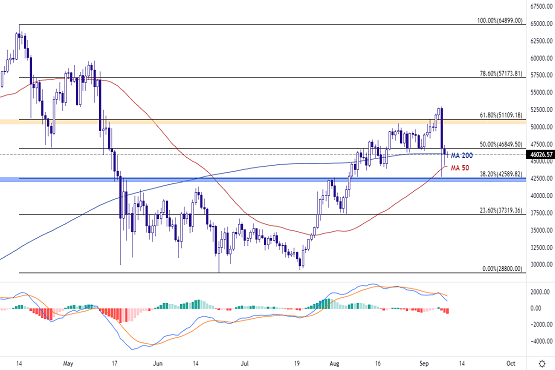 Ethereum, which lost about 0.50 percent in the morning, is priced at $3481.54. When we check the latest figures in the burning process for ETH, we see that 252,330 ETH (approximately $878,299.50) were burned as of this morning. CoinShares announced on Wednesday that it was expanding its European services by listing its physically supported exchange-traded ETH on the Euronext exchange in Paris and Amsterdam. For ETH, which has already managed to attract investor interest, the resources to provide new money flows continue to increase.

When we consider the ETH/USDT pair in technical terms, it appears that it is holding on to the support level in the band 3290-3375 after the sharp fall on September 7. Although there is no recovery in metrics in the daily period after sharp declines, there are recoveries in short-term metrics. ETH, which we saw a positive discrepancy in RSI over a 1-hour period, experienced a short-term recovery with the approval of this discrepancy. We expect the rise to continue as long as there is no daily closure below the support zone marked in yellow for ETH, which we think we will see a recovery in long-term metrics as the positive outlook continues in short-term metrics. 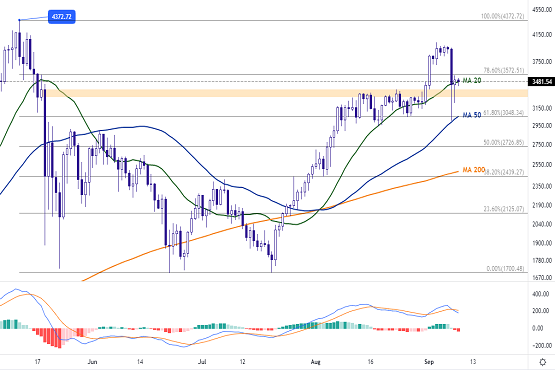 AVAX, which gained about 9 percent in the morning, is priced at $39.40. When we examine the AVAX/USDT parity technically, this price movement on AVAX, which fell below the support level of $38.16, which corresponds to Fibo'23.60, is read as a violation as of this morning. We expect intraday rises to continue at AVAX, which has risen above this level again. Although the negative outlook for metrics continues in the daily period, we expect to see a recovery in these metrics with the strong price movement that may occur towards the levels of $48.5, which coincides with the low minor trend that exists as of August 24. 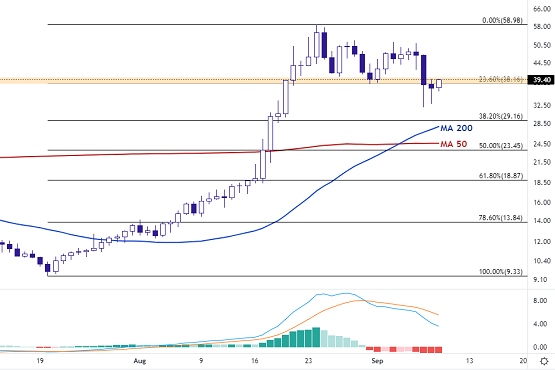 Ripple, which lost about 0.50 percent in the morning, is priced at $1.0956. The investigation into Ripple for securities fraud continues after lawyers representing Ripple challenged efforts by the U.S. Securities and Exchange Commission (SEC) to determine whether SEC employees were allowed to buy XRP.

When we consider the XRP/USDT pair in a technical sense, XRP has a price movement similar to the market-wide outlook and is seen as clinging to the major support area after the sharp fall. With the pressure to sell diminishing and support at $0.97, which coincides with its 50-day moving average, we think that XRP, which continues to be priced close to $1.1, may experience price movements towards $1,237 unless there is a daily close below the Fibo'38.20 tranche of $1,065. 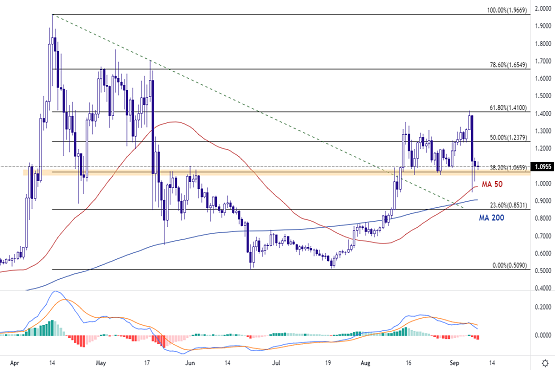 LTC, which gained about 0.60 percent in the morning, is priced at $180.4. According to the litecoin foundation's official blog, OmniLite, an open source platform called "Ethereum Killer", will offer smart contracts, DAO's, tokenized assets and NFT functionality on the Litecoin network. In this sense, we expect the news flow to have a positive effect on prices in the coming period.

When we consider the LTC/USDT parity technically, LTC found support from the 50-day average of $163.3 after the sharp declines on Tuesday, and with its support, it held above the level of $175.9, which corresponds to Fibo'38.20. Although short-term metrics look positive, LTC, which has fallen below its 200-day average, needs to break upwards of $192.8 for the rises to continue. 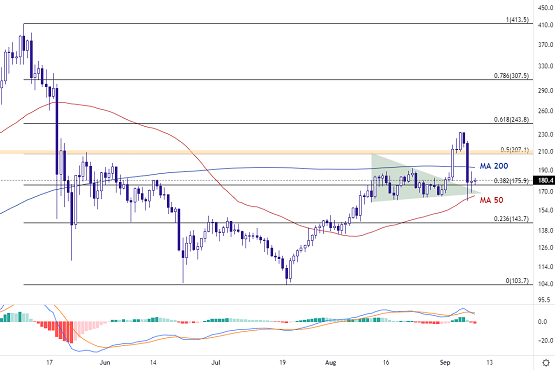 LINK, which dominates the horizontal price movement in the morning, is priced at $27.08. When we examine the LINK/USDT parity in technical terms, despıte the sharp declines, LINK has found support from the region where it has a 50-day moving average in the past 2 days and managed to hold on to the support level at $26.67. In LINK, which closed daily yesterday below its 200-day moving average, the momentum towards sales is seen as diminishing. Although it signaled stokastic sell in the daily period, when we examine the metric that moves away from the overbody zone in the short-term period, we see that the buy signal is coming. When the daily close occurs again over 200 days, there may be an upward trend towards $31. 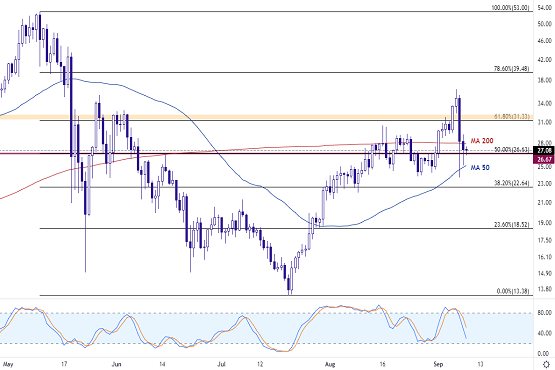 BAT, which gained about 0.65 percent in the morning, is priced at $0.773. When we consider BAT/USDT parity in technical terms, it is seen that the retreat movement in BAT, which has seen an increase in sales pressure with the downward break of the emerging trend as of July 20, has found support from the 50-day moving average. When we examine it over a 4-hour period, we think that the MACD has a dip and may signal a pickup during the day. We're seeing support across the market and there's a recovery in prices. With an acceleration from majors, BAT may experience price movements towards $0.85, which corresponds to its 200-day moving average. 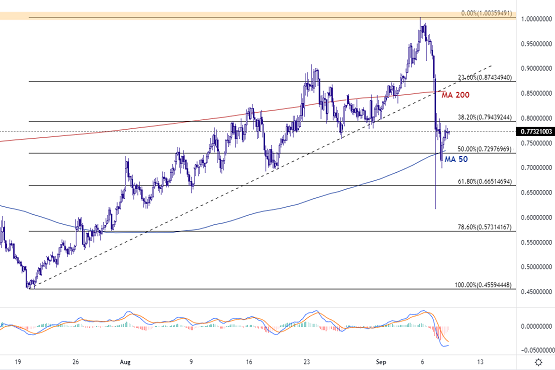