Bitcoin dominance dropped to 66% as Bitcoin saw $ 35,000 twice in the last three days. With this, records were observed in the percentage returns of some altcoins. The high volatility of bitcoin in recent days brings to mind the possibility that the altcoin rally is beginning.

IMF Survey Describes Bitcoin as "Money"
In a survey initiated by the International Monetary Fund, those who argued that Bitcoin is equivalent to money were predominant. Announcing the results of the survey, the IMF stated that Bitcoin and other altcoins are thought to be overwhelmingly monetary in nature.

In a statement earlier this week, European Central Bank President Christine Lagarde stated that Bitcoin is used for money laundering activities and that regulations are required. Tresis Chief Economist stated that the rise in crypto currencies has been supported by the aggressive policies of central banks and that the same crimes have been committed with current fiat currencies for years.

Considered one of the best economists in the US, former Treasury Secretary Summers explained that whenever Bitcoin loses value, it moves much stronger, and the limited supply constantly increases interest. He argued that Bitcoin cannot be destroyed by governments by giving the internet example to questions about regulation and prohibitions.

One of the largest stock exchanges in the USA announced that it will stop XRP transactions for its customers residing in the USA. Customers outside the US will be able to continue trading XRP without being affected by this situation.

Goldman Sachs, one of the leading banks in the USA, has started research to provide cryptocurrency custody services, according to the statements of an unnamed source. JP Morgan had done the same research before. Although the regulatory contents make investors nervous, banks are starting to serve the digital world.

Harper, who served as the Prime Minister of Canada for 9 years, stated that Bitcoin could be an alternative reserve currency against the dollar. In the continuation of his statements, he stated that the only basket currency will be BTC.

Bitcoin is pricing at over $ 35,000 in the new week. The prices in BTC, which experienced some sales especially in the Asian session over the weekend, dropped from $ 37,000 to $ 34,000. However, the price recovered from here, reacted at $ 34,800 and turned to $ 36,000 levels again. Bitcoin's monthly volatility is around 90% outside of the usual levels. Therefore, 20% changes do not represent whether we are entering the bull or bear market. While BTCs withdrawn from exchanges continue to increase, wages paid to miners are trying to normalize.

On the other hand, the Miner Position Index shows that miner sales are starting to decline. When we add all these together, there is no important metric that will put them in a downward trend. When we consider BTC / USD technically; Accompanied by the congestion area, BTC moves are horizontal, but the $ 34,600-34,800 level is in the support position. The horizontal oscillators in the technical chart show us that reactions can come from the current support range, and the momentum has started to turn from the oversold zone. In this case, horizontal movements can be seen in the range of $ 34,600-36,100, gaining strength from the current support. 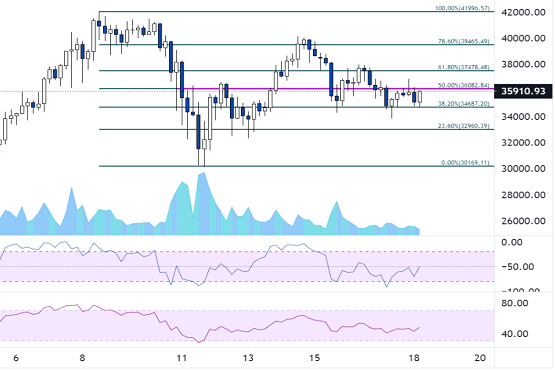 Ethereum outperformed Bitcoin, doubling its BTC return with an 80% monthly return. The most important factor preventing the rise in Ethereum was the gas fee paid to the miners. In the last case, the decrease in gas fees supports the ETH movement. In addition to all these, Ethereums withdrawn from the stock markets, which are subject to hiding rather than selling, continue to decline. This situation also positively supports the Ethereum trend. The ETH / BTC clipper started to normalize. Even though Bitcoin dominance has declined from 70% to 66%, ETH is still more discounted.

When we consider the ETH / USD parity technically; The rise since January 11 has been tested with the sub-support of the channel $ 1180. Because the $ 1180 level will be our next major support. With the hold here, Ethereum has already begun to be basically supported, technically it will find strength and gain momentum.ETH looks technically positive in the movements, including our main support of $ 1180 and the mid-channel of $ 1300. 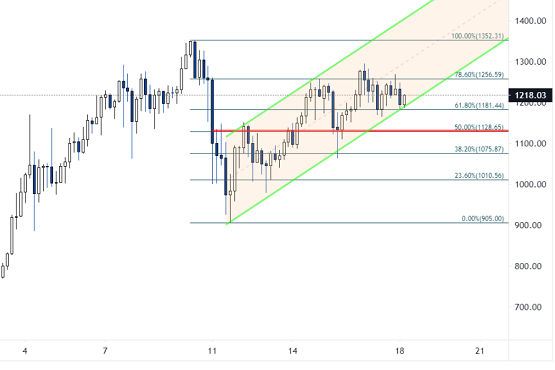 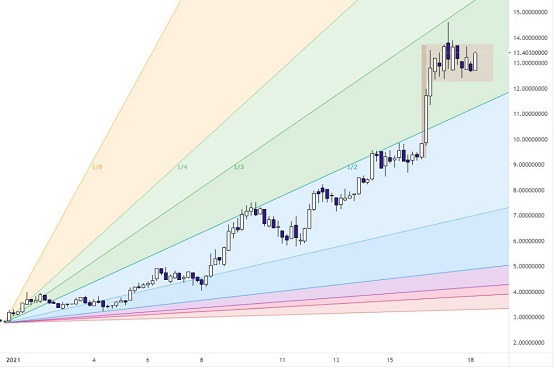 The XRP / USD pair is hovering at $ 0.27 in the morning. Just days before the lawsuit between the US Securities Commission and the US Securities Commission on February 22, one of the largest stock exchanges in the USA, Kraken announced that it stopped XRP transactions for its investors residing in the USA, and almost all of the major exchanges for Ripple have eliminated their investors. The circle of exchanges that can be traded for XRP for residents of America is now decreasing. However, we know that the US share of Ripple transactions is low and the worst is left behind with previous exchanges delisting XRP. Still, prices are well under way for the price that has dropped down to $ 0.17, as the case reports first. In the worst possible scenario, XRP, which will not be a customer by the US as the relevant asset is considered a security, has already announced that it will not be adversely affected by this situation since 95% of its investors are outside the USA. In addition, the fact that some countries on the Asian side stated that they do not qualify as a security for XRP, one of the largest cryptocurrencies, makes it reassuring for Ripple company that wants to move its center to the Asian side.

When the XRP / USD parity is examined technically, it will be necessary to hold the Fibo'78.6 correction zone at $ 0.27 in order to complete the double bottom formation, and this level will need to be supported and confirmed by exceeding $ 0.36 in the upward trend. can move the pricing to higher regions. Although we have not seen a recovery in Ripple, where bad pricing is behind for now, we are witnessing horizontal transactions. Therefore, in case of hold above $ 0.27, we can see upward reactions. Still, the situation is horizontal and congested. 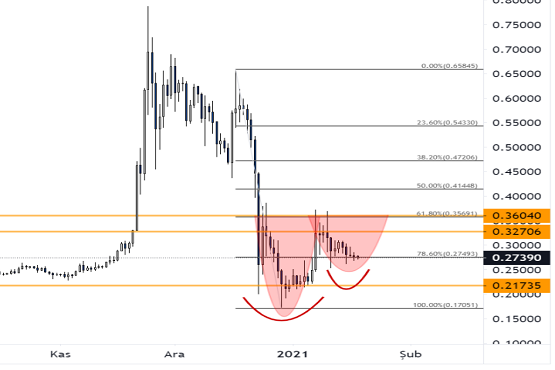 Although the LTC / USD parity is one of the parities that has been very positive in macro and technical terms, we see that it is not reflected in the price performance. We have said that Litecoin, which is priced at $ 139 in the morning, will be one of the most noticeable crypto currencies with the weakening of Bitcoin dominance. Litecoin, which has a strong potential in the long term with the updates and developments worked on, finally carries its pricing, which is at critical levels, to the higher regions with the increase in interest and demand for altcoins. Although we see sharp price movements for the high volatility pair, the upward moves following the corrections keep Litecoin in a bullish position. According to many altcoins that have recently folded their own records, there are positive expectations for Litecoin, which is still far from its ATH in 2017.

When the LTC / USD parity is analyzed from a technical point of view, overcoming the $ 125 resistance, which we frequently emphasized in our previous analyzes, brings a rapid price increase. Although the price, which held for a while above the $ 125 level in the Fibo'38.20 correction, tested the $ 188 level with a rapid increase, the subsequent sales formed a weak and flat course in the short term in the price outlook. Permanence in regions of $ 125 and above can bring prices of $ 188 and above for Litecoin. The pair, which continues its positive course for now, will follow the $ 125 support point and the Fibo'23.60 correction level, which corresponds to $ 149. 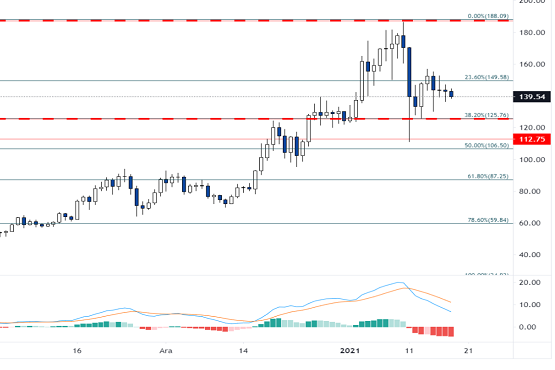 LINK has made more than 50% returns in the past week and ended the long idling period. On the basis of monthly returns, it is 2 points behind ETH with 65%. While ETH will be the advantageous side in the ETH-BTC clipper, we expect it to positively affect LINK. For this reason, this movement for LINK may not have come to an end.

When we consider LINK / USD technically; The trading band is in the range of $ 19.65 - $ 23.50. The interim support for the pullbacks will be $ 21.50 for LINK, which has set a record at $ 23.70 The $ 21.50 level is seen as potential for LINK, which has made a minor double peak in the record zone for now, but the upward momentum will continue unless the major support is broken at 19.65. The look is positive and horizontal. 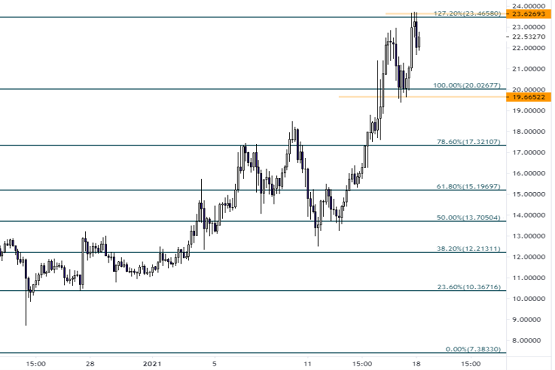 BAT stands out as a coin that defends decentralized applications (dApp) and privacy these days, when privacy coins are at the forefront. Trading at $ 0.2740 this morning, BAT diverges positively from the rest of the crypto market. BAT / USD, which has been in the bullish channel with the price movements since November 2, is gaining strength from the middle band of this channel, $ 0.25. While $ 0.32 is the upper channel in the upward trend, if it gets strength in the $ 0.25 region, which is the middle band in the retracements, it can continue on its course without the possibility of a downward correction. 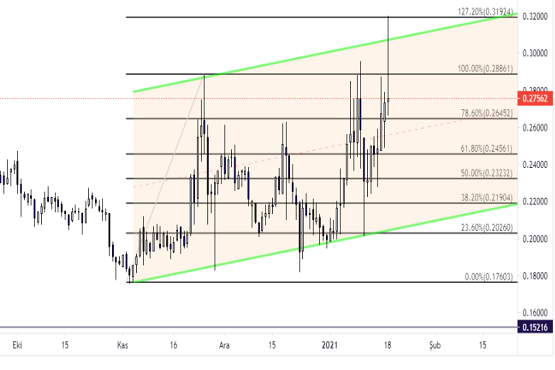