It is the first time that China has been working on it in a long time. The digital yuan is being used in the canteen of a university hospital selected as a pilot area in Shanghai, China.

VersaBank, operating in Canada, announced on Wednesday that they are planning to produce a digital currency called VCAD, which will be backed by the Canadian dollar in its reserves.

Microstrategy, the corporate company with the largest Bitcoin assets, announced in its press release on February 24 that it purchased 19,452 Bitcoins. Thus, the Bitcoin presence in the company's balance sheet increased to 90,531.

Cathie Wood, founder and CEO of Ark Invest Management, said in an interview with Bloomberg that the Bitcoin correction is quite healthy. Stating that they are positive about Bitcoin, the CEO added that he is happy about this correction in BTC.

Bitcoin is trading above $ 50,000 this morning, with an outlook similar to yesterday's performance. BTC, which is 4% behind on a weekly basis, is 14% away from its record. We discussed some tips for investors to enter the trade in the "Crypto Zoom" program yesterday. Today, we will observe the situation from on chain data and try to decide whether the sales are over or not. The amount of BTC in the stock exchanges turned to negative net. There is an outflow of BTC in the exchanges, it is positive. The Miner Position Index has begun to retreat and indicates that miners' sales are starting to decline, it is positive. The increase in the amount of stablecoin entering the stock markets indicates that the market is growing. According to these indicators, BTC seems to have thrown through the dark clouds of its last pullback.

Technically, BTC / USD broke its descending trend by starting a short term bullish channel. The market metrics we mentioned above support BTC, although there is still no daily momentum and MACD buying. With the scenario where market data can behave earlier, it may be more accurate to enter tier analysis instead of looking at indicators in BTC. The region of 44,700-45,000 and $ 48,200-48,800 is the region where the second bottom is formed. The view is in the direction of recovery and horizontal. 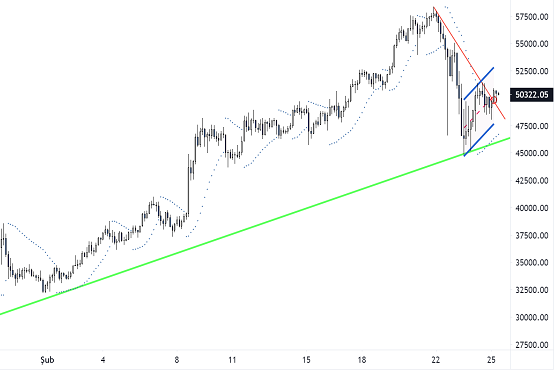 Ethereum is following a slightly sellers and flat outlook, with slightly negative divergence relative to BTC this morning. Network charges and network density are still much higher. Therefore, "Ethereum Killer" PoS coins such as ALGO, XLM and AVAX come to the fore. Although there is an increase in the number of new and active accounts in ETH in the current situation, there is no significant change in the number of wallets with 100 and 1,000 ETH in their account. For this reason, accounts that will make great mobility in ETH are more dormant.

When we consider the ETH / USD parity technically, the pair, which bottomed at $ 1350, pulled back in the $ 1680 region. The pair, which descended below the bullish channel it previously broke down, could not return and break its upper resistance. Currently, the $ 1670 level is resistance, while the $ 1570 and $ 1510 levels are in support in the pullbacks. The outlook is weak and unstable. 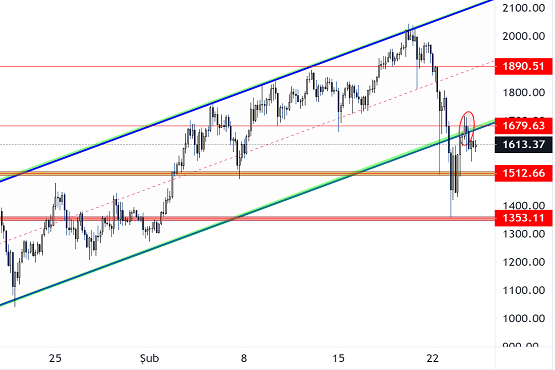 Based on the poor performance of AVAX in the last two weeks, we see that yesterday and today the reactions have come and want to return from the bottom. Currently trading at $ 30.40, up 1.5%, AVAX is following a horizontal trend this morning, keeping up with the market. The Avalanche platform, of which Emin Gün Sirer is one of the founding partners, announced that they cooperate with Japan. Through Proof of Learning (PoL), one of Japan's largest education platforms, users and developers will be trained on high-performance and decentralized AVAX network and AVAX services will be introduced. Thus, AVAX, which will be easier to adopt by Japanese developers, can be expected to attract the attention of Japanese investors and strengthen their hand here.

When the AVAX / USD parity is analyzed technically, it is seen that the horizontality between the $ 25.00 level in the Fibo'78.60 slice and the 32.60 level in the Fibo'61.80 zone continues. In the parity where the downward trend is dominant, movements at $ 32.60 and above can be expected to turn the course towards buyers, but for now, a weak course is in question. Oscillators are above the support level, but their ends are down and do not give a positive signal. In AVAX, where the downward trend continues, a minor short-term upward channel has formed. Unless the $ 28.00 level breaks down, there may be a reaction towards the $ 34.00 level where the channel upper band and the descending trend intersect. 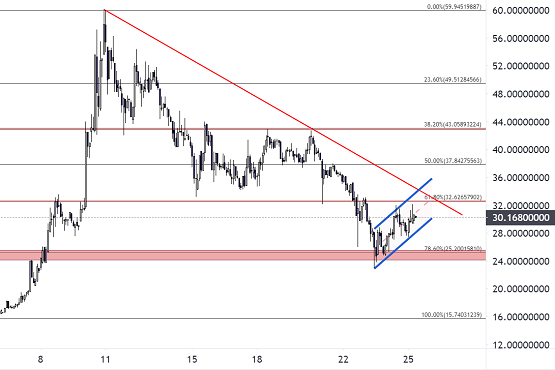 The XRP / USD pair is pricing in the $ 0.47 zone this morning with a horizontal change. During the litigation process with the SEC, we did not neglect to warn investors to be cautious, and we have also touched upon the intensity of the risks by XRP many times. However, XRP survived this process strongly and was resistant even to withdrawals experienced throughout the cryptocurrencies. Its appearance is therefore positive. The Tether case, which was resolved afterwards, also gave the market a sigh of relief, in line with the regulations. For this reason, possible decreases in XRP can be perceived as opportunities for investors.

When we examine the XRP / USD pair technically, it is seen that the 4-hour candlestick closes have completed in the last 24 hours around the $ 0.47 zone. The $ 0.47 zone is also within the 38.20% slice of the Fibonacci retracement, and the responses here will lead us to set a short-term target for XRP. On the other hand, the reverse pennant formation creates a price target that extends to the $ 0.30 region. But we will wait for the candlestick close below $ 0.46 for the pattern to be confirmed. In such a case, it can be viewed as an opportunity for buying rather than panic that there will be a decline for XRP. For this reason, the trading strategy spread over the supports will be more prominent. 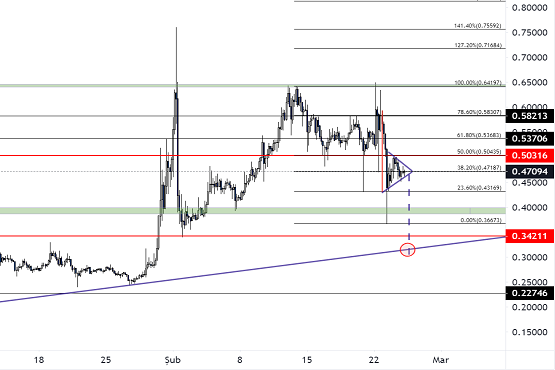 The LTC / USD pair is priced at $ 181 this morning with a horizontal change on a daily basis. It is 20% behind Bitcoin on the basis of monthly returns and can be expected to converge to Bitcoin based on the scissors differences. However, if we want to compare Litecoin within itself, it is 60% away from the record and the reaction on the Litecoin side is weak, although the expectations for the rise are higher than other crypto currencies. On the other hand, Grayscale purchases are continuing and 609 more LTCs have been added to the portfolio in the 24-hour exchange.

If we interpret the LTC / USD parity technically, the pair's break of the $ 222 support and the accelerated decline of the weakening prices since then created the horizontality between $ 158-190. As the candlesticks above $ 190 are delayed, slowdowns can be seen in the pair's upward momentum. Although there are horizontal transactions, due to the potential of LTC arising from the scissors difference, the technique can also be followed by the upward trend by spreading withdrawals to the tiers and the horizontal trading strategy can be followed as a dual strategy until the horizontal is broken. 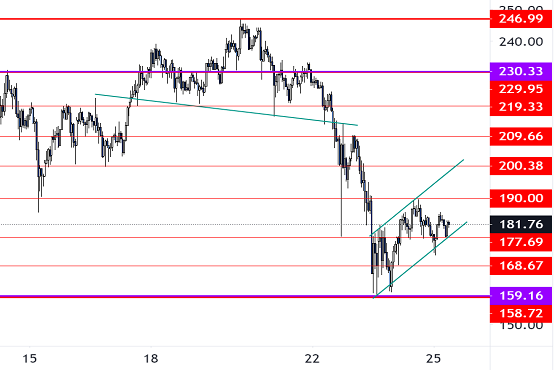 While Chainlink is the largest cryptocurrency in the DeFi industry, it continues to feed and develop from the rapidly growing DeFi market. While Chainlink smart contracts have recently reached many ATH levels, a new development called Off-Chain Reporting (OCR) has been introduced, considered LINK's biggest update to date, to make the service even more efficient. With this update, more data will be available on the chain and DeFi products and services will be accelerated by 10 times. The main goal is to allow more smart contracts to be built on Chainlink. If the promises mentioned are realized, it will inevitably affect the demand for Chainlink positively.

When the LINK / USD parity is examined technically, it is noteworthy that the reaction at the $ 23.50 level carried the parity to 25%, but the price candles here are short and the wicks are long. This image on the 4-hour chart may mean that the fluctuations in pricing will evolve in one direction and accelerate here. On the other hand, the formation of the flag formation stands out. For this reason, it is possible that the acceleration mentioned can be upward and provides 20% potential. $ 30.20 initial resistance level. Oscillators are still unstable. 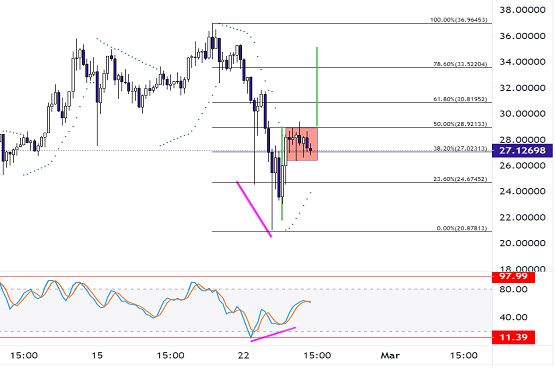 BAT is trading at $ 0.50 with a 1% retracement this morning. BAT's appearance, which returned from the bottom with a 10% rise yesterday, is more successful than other coins, but still remains in its trend and gives a double bottom view. Currently facing resistance in the Fibo'38.2 zone, the pair can move up to $ 0.60, taking its response further 15%, with the $ 0.51 level breaking upwards. The view is in a horizontal and collated view. 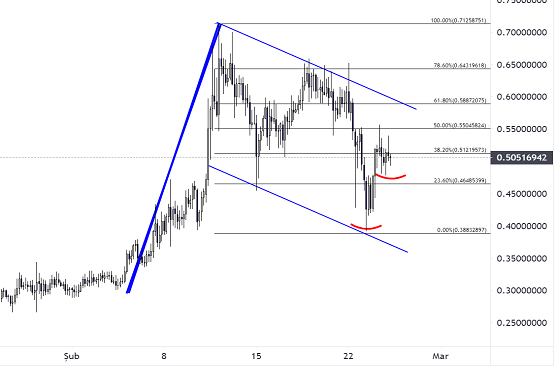