Bitcoin rose above $ 22,200 yesterday after months of intense upward movement. It is the highest price ever reached in Bitcoin's history. Especially in recent days, the demand for cryptocurrencies has increased with the heavy purchases of institutions.

With this acquisition, "Ripple" CEO Brad Garlinghouse said the company will advance towards becoming a more inclusive financial system, leveraging deep knowledge and experience on markets, capital flows and banking.

Ruffer Investment Company received $ 15 million worth of BTC. The company stated that it made this investment to defend against devaluation.

According to the answers of 217 fund managers who participated in the Fund Managers Survey published by the bank on a monthly basis, the third most popular investment option in America is to buy BTC. The total amount of assets managed by those surveyed is $ 576 billion.

Increasing demand for Ethereum wallet creation reached its highest level in almost three years with the addition of 177,000 new addresses to the network on December 14, according to Santiment analysts. The number of active addresses also increased to 714,081 on December 14. However, its all-time high exceeded 1.1 million during the crypto boom in January 2018.

The share price of Grayscale Ethereum Trust (ETHE), which was traded at $ 39 at the beginning of October, rose to $ 146, almost tripling in the last three months. Grayscale continues to accumulate approximately $ 1.73 billion of Ethereum under its management.

Bitcoin saw the $ 22,200 level and broke the all-time record as of the report date and time. It is priced at $ 22,000 this morning and saw some profit-taking in Asian hours after the American closing. The overall crypto market is up 12% and the overall market size has increased to $ 631.2 billion, gaining $ 100 billion in almost one day. Yesterday's FOMC meeting was also a determining point for the BTC value. The fact that the Dollar Index entered the bear season for the future and the Fed exerted pressure on long-term interest rates and presented its monetary and quantitative easing, BTC also strengthened its value gain against the weak dollar. It can be expected that dollar movements will be weak from now on and cryptocurrencies will move more easily against the dollar in the medium-long term. After the recent rise of Bitcoin, the reserve risk (price / Hodl amount), that is, this ratio, which can be described as long-term confidence in price, has increased significantly. Grayscale received 3620 BTC in just 24 hours. The fact that both corporations and individuals are getting used to and waiting for a long time may mean that there may be a certain base in prices and all withdrawals-corrections on that base.

When we consider BTC / USD technically; He made the break of the triangle formation in the range of $ 16,000-19,500. While the triangle length coincides with the range of 22,700-23,000, the Fibo retracement levels of possible retracements are at 21,500 (161.8%), 20,850 (141.4%). It will be a healthier follow-up for the prices to settle and become a band after the rapid rise. For this reason, individual trust in volatility management will come to the fore. The outlook is bullish and positive appetite. 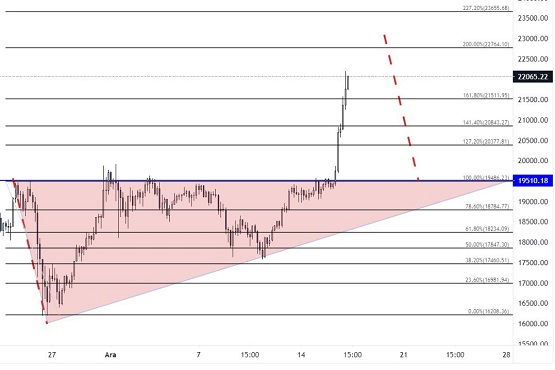 Ethereum continued its rise, which started yesterday under the leadership of Bitcoin, with the weak dollar joining in, and its pricing around $ 580 yesterday is hovering around $ 650 this morning. This increase in Ethereum came with Bitcoin, so the price effect of the 2.0 transition may occupy a small area in this denominator. In fact, Ethereum may even negatively diverge on the basis of return during the day. Although this does not mean that Ethereum will fall, it does mean that Bitcoin is stealing a role. For this reason, the movements of ETH should be followed a little more. BTC dominance rose to 65%. ETH and altcoin season may be delayed before dominance regresses. The total amount of money stored in DeFi ‘also increased to $ 15.7 billion. Therefore, we do not expect hard sales, but a more controlled movement in the short term. 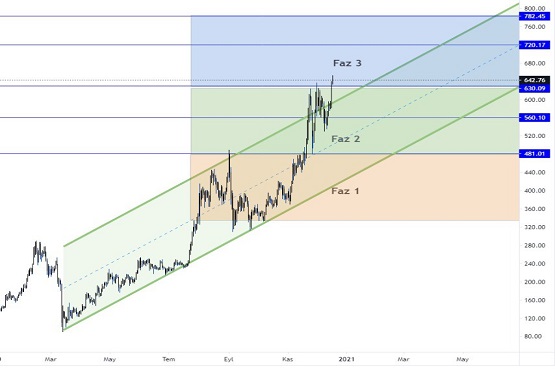 Avax is moving around $ 3.30 this morning, up 3% from yesterday's trading. After sliding behind the $ 3.00 level after last week's sharp declines, AVAX is experiencing a V-type recovery with its technical outlook. Avalanche generally values ​​the blockchain industry and the immutable token (NFT) industry. Various games and applications are being designed to raise awareness of individuals and businesses about how blockchain can transform games, improve or disrupt existing business areas, and accelerate adoption. Now Avalanche has made a new breakthrough and has joined the Blockchain Game Alliance (BGA). Nevertheless, although we cannot see that it has a significant impact on prices, they continue to develop business in terms of medium and long term use and spread.

When we examine AVAXUSD technically, it was not sufficiently positively affected by Bitcoin's rise. Resistance at $ 3.40, if AVAXUSD can break the neckline that corresponds to the 3.40 level, the $ 3.60-3.80 levels come to the fore with a double bottom view. A support point of $ 3.17 could be considered in the event of further retractions.

Ripple was priced at $ 0.45 yesterday, while it is moving around $ 0.56 this morning, rising around 20%. Ripple's recession has taken its place, as Bitcoin broke the all-time high of $ 20k to $ 22k. Investors were caught by FOMO and a large amount of market entries were observed. Especially in Ripple, which is actively used as a payment and transfer tool, it is expected that corporate agreements will increase and continue its positive course with new projects. According to the Flare Network's statement, they reported that the second airdrop project will take place in the coming weeks. The arrival of a second airdrop could increase the demand for locked-on XRP. Will the Spark Token be as much in demand as the airdrop, but we still think that a second airdrop news may buffer possible falls.

When we look at the XRP / USD technically, it is moving forward near $ 0.56, reacting upwards compared to yesterday's transactions on the four-hour charts. Reaction sales can be observed as long as XRP / USD, which tested $ 0.5720 from strong resistance points, cannot break. With the continuation of possible rises, $ 0.5920-0.6130 levels could be considered. 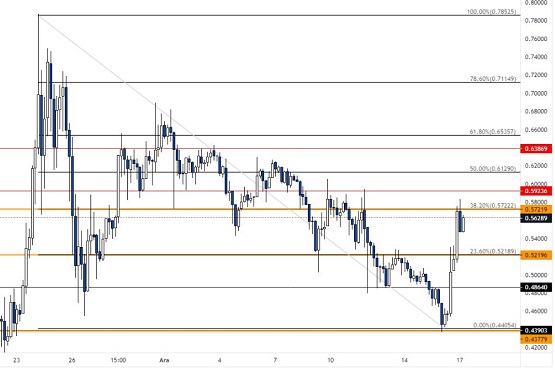 Litecoin is moving around $ 92, up 15% this morning, based on yesterday's transactions. According to Glassnode data, Litecoin average transaction volume reached its highest level in the past nine months as Bitcoin broke $ 20,000 and hit an all-time high. Litecoin MVRV Z-Score rose to 0526, the highest level in the last 1.5 years. This increase indicates that transactions are made at a higher limit than the market price, especially with the increase in demand and the buying pressure in prices. The actual price of Litecoin reached its highest level in the past eight months. Average transfer volume between wallets also reached almost the highest level in the last year. In Litecoin, where the developments in demand are followed, the main party positively affects LTC. We see that the short-term market sentiment has disappeared. It provides a positive indicator in terms of the longer term volatility of Litecoin's value.

When we consider the LTC / USD technically, it is traded at $ 92, although LTC / USD, which rises to $ 94 in the morning hours, withdrawals up to $ 90 in the morning hours. It continued trading above $ 90 from strong resistances that have been going on since November. In the continuation of possible increases, a dynamism can be observed to the level of $ 95.45. On the other hand, as the $ 90.20-87.30 levels are the support area in possible profit sales, the prices may visit this area for a short time. 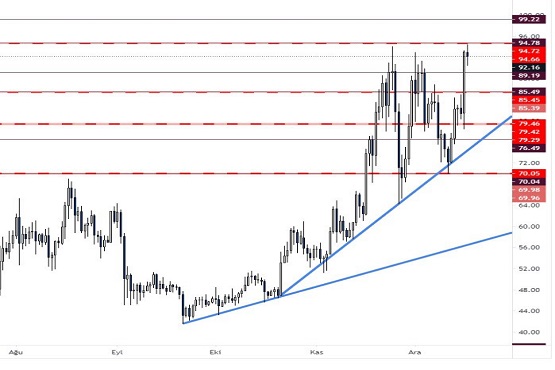 LINK is moving around $ 13.60, up about 8% compared to yesterday's transactions. Although the correlation of LINK / USD with BTC / USD decreases to the level of 0.16 at the level of 0.56 correlation, it is seen that it is affected by the Bitcoin price movement at a minimal level. The increasing demand of institutional investors for Ethereum has also caused an increase in the amount of Ethereum locked. Especially the increase in trust and demand in the Ethereum blockchain can also have a positive effect on LINK using the Ethereum network.

Technically, LINK / USD continues to move forward within the rising channel that has been running since September. After the four-hour TOBO view, we specified the target area of $ 13.60 in our analysis yesterday. He tested the channel's top resistance band of $ 13.80 after reaching the expected target in the TOBO view. The supports of the bullish channel, $ 13.30-12.80, could be considered for possible pullbacks. 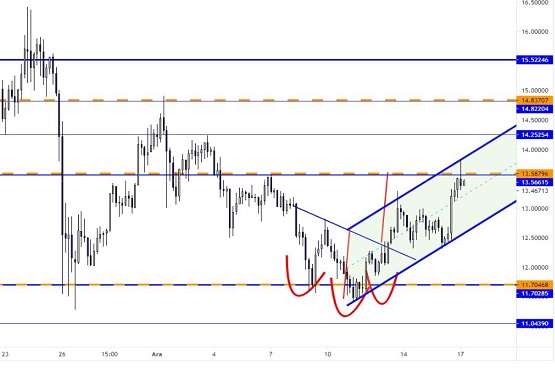 BAT is moving around $ 0.2290 this morning, up 5% from yesterday's trading. According to Glassnode data, BAT average transaction volume has increased by 101% in the past day compared to the two-day averages. BAT / USD price, which has an inverse correlation relationship with Bitcoin, increased less than other currencies on our exchange this morning. However, due to the instability it shows when it rises, we continue to remain short-term for BAT.

From a technical point of view, BATUSD has gained momentum after yesterday's BTCUSD rally in its uptrend, but it has not strongly surpassed the $ 0.2308 level, which is Fibo 50% resistance. The middle band of the channel, $ 0.2270, may be considered in possible withdrawals. 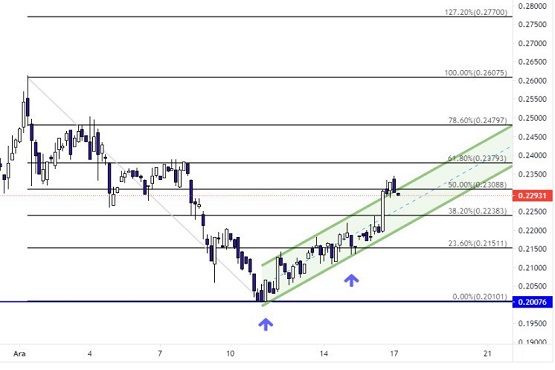