Spain-based BBVA announced that it will offer Bitcoin investment services to all private banking customers in Switzerland after 6 months of testing.

A state-owned Chinese commercial bank has activated a feature that allows users to cash out their digital yuan from more than 3,000 automated teller machines (ATMs) in Beijing.

26 Cryptocurrency Mines Shut Down in Sichuan

US Senate Member Cynthia Lummis said in an interview that Bitcoin uses 40% renewable energy, while the global average is 12%.

Steve Cohen, CEO of Point72, an asset management firm with assets under management of approximately $22.1 billion, stated that it has entered the cryptocurrency market.

Bitcoin is priced at 34 thousand dollars with a decrease of 3 percent this morning. The news of the closure of BTC mines from China started a negative trend in the market. When we examine the weekly and daily chain data, we see that there are net BTC inflows to the exchanges and also net Tether outflows from the exchanges. Investors tend to sell with the decline.

When we consider the BTC/USDT parity technically, BTC, which is at 34 thousand dollars, is priced above the support in the 32-33 thousand dollars band. The Death Cross, which was formed on June 19, as the 50-day moving average cut the 200-day moving average down, supports the decline experienced over the weekend. The $33,000 levels are a very important support for BTC, and if the support is broken down, the price can be pulled towards the $30,000 levels. In the short term, purchases can be made near support and sales near resistance levels at 36 thousand dollars. RSI may find support at 33 levels. However, we cannot talk about a definite rise for BTC without breaking the downward trend that has been going on since May 10, that is, the 37-38 thousand dollars levels upwards and maintaining these levels. 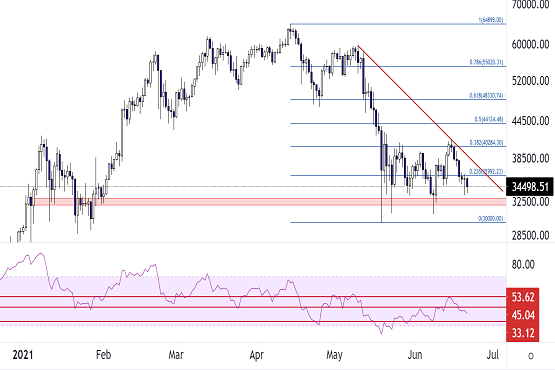 Ethereum is priced at $2,090 in the morning hours. When we examine the weekly and daily chain data, we see that there are ETH outflows from the exchanges, albeit at very low volumes. In addition, the amount locked in Ethereum 2.0 tends to increase day by day. Although these data are relatively positive, there is a pullback in Ethereum with the overall decline in the market.

Technically speaking, ETH/USDT, which is priced just above the support at the 2014 dollar levels, breaks this support to the downside and can be pulled back towards the $ 1714 levels if it persists, but if the price continues above the support at $ 2041, Fibo'23.60' The $2152 levels, which coincide with the correction level of the . Buying close to support and selling close to resistance will be appropriate in the short-term in the generally receding market. 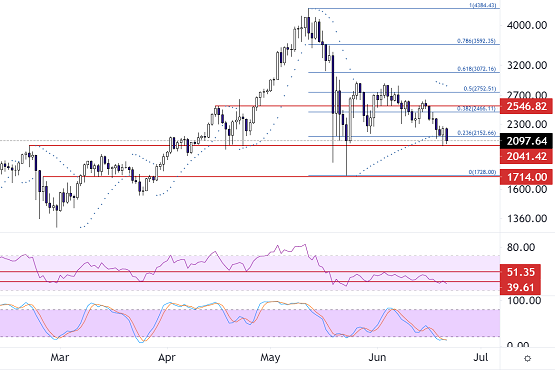 Losing about 10 percent in the morning hours, AVAX is priced at $12.5. When we consider the AVAX/USDT parity technically, it is just below the $12.94 level, which is the 50% tranche of the Fibonacci correction, which was pulled from the 2020 December low to the 10 February high. Preservation of this level is important for AVAX/USDT, which is dominated by price movements towards the $ 11-12 region, which worked as an important support on May 23. If there is a daily close below this zone, it is expected to see decreases towards $9.00 levels, which is the Fibo'61.8 tranche. If there are voluminous reactions from the support zone, upward movements can be seen again. 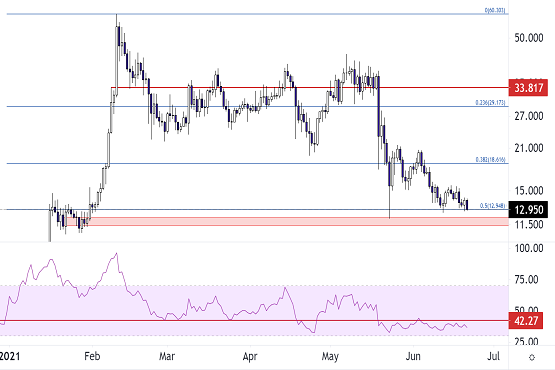 Ripple is priced at $0.72 in the morning hours. We have covered the positive developments on behalf of Ripple in the ongoing SEC and Ripple lawsuit in detail in our previous bulletins. In addition, we can say that although there is no positive or negative news flow for Ripple as of June 21, it has acted with the general decline in the market. He is required by the SEC to hand over his BTC, ETH and XRP related emails as well as internal documents to the case on July 2. The next important date known in the SEC and Ripple case will be July 2.

Technically speaking, the XRP/USDT pair continues to move above the support level at $0.69. We consider the $0.77 levels, which coincide with the Fibo’38.20 retracement level, as resistance. When we examine the RSI, it is below the resistance at 44.48 and close to the oversold zone. In the short term, we think it is appropriate to buy near support and sell near resistance. 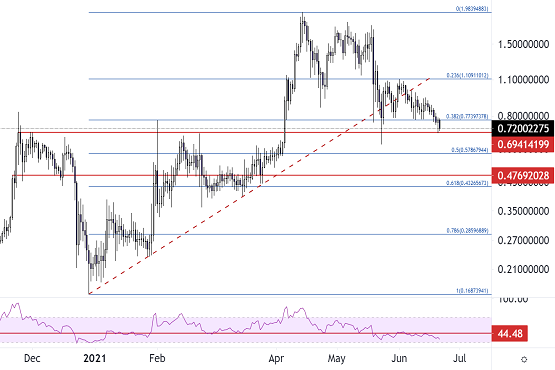 Litecoin is priced at $139 this morning, down about 11 percent. When we consider LTC/USDT technically, the symmetrical triangle that has existed since May 20 was broken down on June 18 and the downward movement continued. Just above the $139.4 support level and the Bollinger lower band, if the price does not see an upside reaction from this level, pullbacks towards the next support level will occur at $124. Considering the market conditions for LTC, which is expected to retest the $158.67 level, which is the Fibo'23.60 slice, if it holds at this level, buying close to the support zones and selling close to the resistance levels is seen as an appropriate strategy. 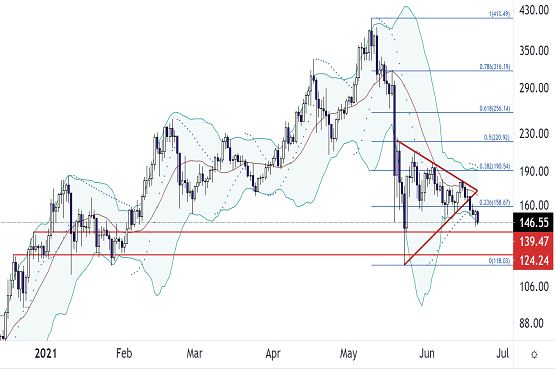 In the morning hours, LINK is priced at $ 20.22. When we consider the LINK/USDT parity technically, we can say that it is priced just above the support at $20.14. If this support is broken to the downside, there may be a pullback towards the Fibonacci starting point of $15. We do not recommend new purchases for LINK without breaking the uptrend ($22.00-$23.00) downtrend since mid-May. 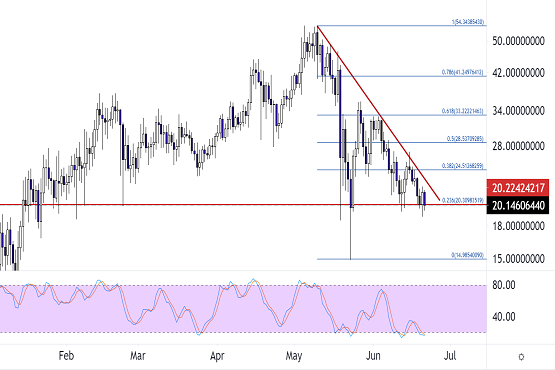 BAT is priced at $0.57, down about 4 percent this morning. When we consider the BAT / USDT pair technically, the important support level that has existed since February 2021 is priced just above $0.54. Looking at the daily period, the stochastic, which is in the oversold region, continues the sell signal that came on June 17. Unless there is a daily close below the support at $0.54, it will retest the downtrend that has existed since May 27 at $0.62. If this support level is broken to the downside, the price movement will continue towards the May 23 low of $0.45. 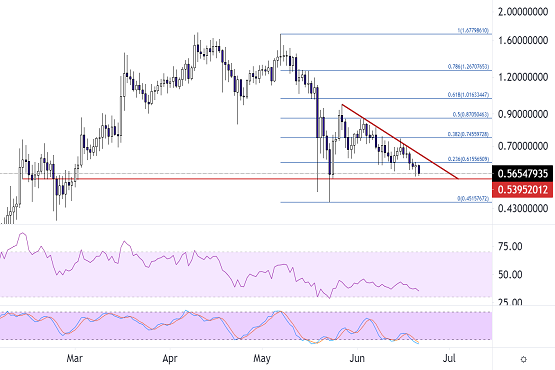