Tesla, which bought $ 1.5 billion in BTC in February, drew reaction by selling 10 percent of its Bitcoin positions. In the statements made by the company, it was reported that they will continue to believe in and accumulate Bitcoin, and this sale was made because cash conversion was needed.

Cryptocurrency Demand for PayPal is Higher Than Expected

PayPal CEO Dan Schulman explained that the demand for cryptocurrencies is several times greater than they expected. PayPal has recently offered a wider range of payment options to its customers by activating transactions with crypto assets.

USDT Has a Record Market Value

The market value of Tether (USDT), which has the largest market value among stablecoins, has exceeded $ 50 billion. This shows that there are more than 50 billion USDT in circulation, pegged to the US dollar.

JPMorgan, one of the largest investment banks in the world, will offer its customers the opportunity to invest in Bitcoin. The BTC fund, which will be offered by the bank, which manages $ 3 trillion in assets, to certain levels of customers, is expected to be active towards the summer months.

Famous Player Will Receive All His Salary With Bitcoin

Miller, founder of Miller Value Partners, stated in a recent interview that demand is increasing rapidly despite the two percent growth in BTC supply per year, and that this will continue to push bitcoin prices up. Referring to the increase in institutional interest, Miller added that the spread of Bitcoin is in the beginning stage.

World famous club Amnesia Ibiza has partnered with Decentral Games to open a virtual space on the Ethereum blockchain. The club, which will be active in June, will have three ETH-based virtual rooms. Users will be able to use their own NFTs on this platform.

Vitalik Buterin, the co-founder of Ethereum, donated $ 600,000 worth of Ethereum to support India's difficulties in the coronavirus outbreak. Vitalik's call for India, which is considering to ban cryptocurrencies completely, was that more crypto lovers should contribute.

Bitcoin tested the $ 47,000 level over the weekend due to Biden's tax plan, then, in our opinion, this news has made its sharp turn due to the misinterpretation of the market and institutions still not leaving the field, and this morning it is pricing with buyers just behind $ 55,000. It is not negative for Tesla to sell BTC because he said that they are selling CFOs not because they do not trust BTC or because they will not continue their journey, but because they have already started selling Tesla with BTC and they will get BTC revenue from there. For this reason, it is not disruptive news, but also the news that JPMorgan will create a BTC fund shows that there are new corporate additional demands.

When we consider BTC / USD technically, the resistance level corresponding to the Fibo'38.2 slice at $ 53,920 has started to be overcome or even support. At the same time, the minor descending trend was broken. The purchase volume is recovering and the new trend may continue towards the $ 58,100 level in case of a break of $ 56,000 unless the intermediate support levels of 53,900 and 53,400 are broken down. 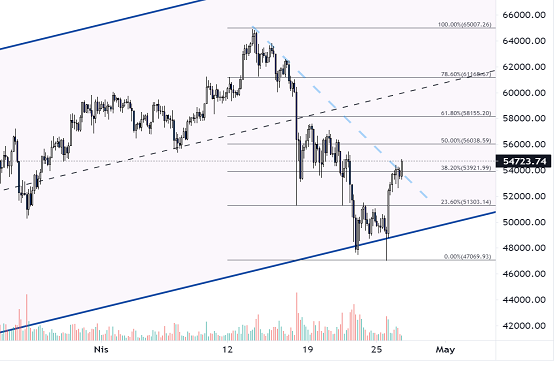 While Ethereum transaction fees fell to their lowest levels since January, they saw price jumps in January, and jumped from $ 700 to the $ 1400 region. Traded at $ 2560 this morning, ETHUSDT is attempting to break resistance with a gain close to 1%. The biggest supporter of the buyers will be the low transfer fees in the ERC20 network. This morning, there is an increase of 12% and 8% in the number of active and new accounts. Therefore, we are in a period where Ethereum is basically supported. The amount locked in the ETH 2.0 update has exceeded $ 10 billion today.

When we consider ETH / USD technically, it is trying to break resistance in the bullish channel. This move towards the record at $ 2650 will be out of the triangle squeeze if it breaks the $ 2550 level on the upside. With pricing squeezed between this resistance and the channel lower band, we can state that there is no room for panic as long as it does not fall below the $ 2100 level and there is potential to continue the move towards the $ 3000 levels. 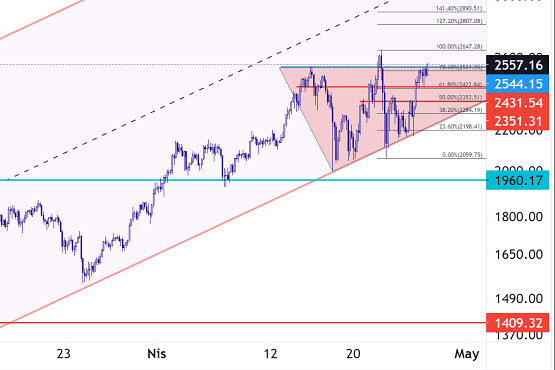 The AVAX pair is pricing in the $ 27.70 region this morning with a 5% appreciation. The pair, which saw buy reactions from the lower band of the $ 21.00 horizontal channel, rose by 25% in the last two days. For the pair, which is in the $ 27.80 intermediate resistance zone, making this level a support level may support the course towards the mid-channel's $ 36.00 zone. On a daily basis, the MACD has eased selling pressures and the maturity lines are on the verge of a positive intersection. Momentum is recovering from the bottom levels. The outlook is positive. 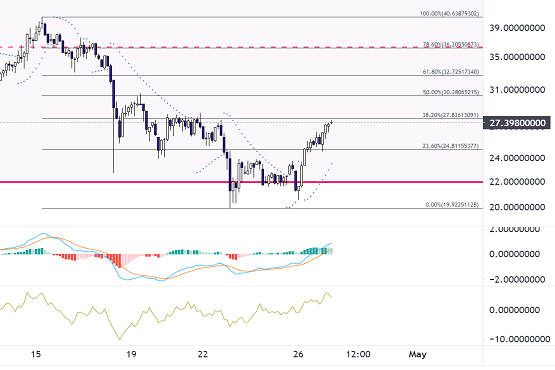 Ripple is pricing around $ 1.43, up 5% this morning, but is up 25% in 24-hour variations. If the SEC's request to access information on foreign exchanges is rejected by the judge during the trial for the XRP, which has gained new momentum ahead of the pre-hearing on April 30, a new declaration of legal victory on behalf of Ripple could trigger the appetite for buying.

If the XRP / USD pair is technically examined, the upward break of the $ 1.12 Fibo'23.60 tranche also left the downtrend behind and eased pricing for the upwards. If the region in the $ 1.41 Fibo'50 zone is brought into support, the next resistance level of $ 1.54 may come to the agenda, but persistence above $ 1.41 should be maintained. Oscillators give a horizontal signal in a 4 hour period. 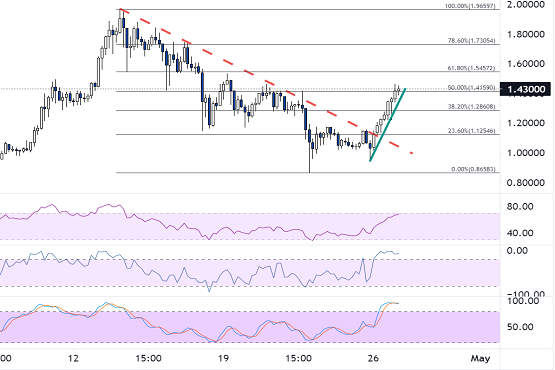 Litecoin  It is priced at $ 254 this morning with 2.6% appreciation. Litecoin, whose correlation with Bitcoin decreased to 0.24, is twice as volatile as BTC in its 30-day average volatility. Active in April
The demand increase for Litecoin, which also brings ATH in address and transfer amounts, can be expected to continue with market leadership.

If the LTC / USD pair is technically taken into account, the pair started its major move on an uptrend, but started a downtrend after the $ 336 local peak. Prices above the $ 245 main support are also on the breaking point of the downtrend. In the 4-hour period, the MACD is moving the maturity lines above the reference zone, while the momentum is horizontal. It is positioned as the first resistance for the pair in the short term in the $ 271 Fibo'50 tranche.

It is priced at $ 254 this morning with 2.6% appreciation. Litecoin, whose correlation with Bitcoin decreased to 0.24, is twice as volatile as BTC in its 30-day average volatility. Active in April
The demand increase for Litecoin, which also brings ATH in address and transfer amounts, can be expected to continue with market leadership.

If the LTC / USD pair is technically taken into account, the pair started its major move on an uptrend, but started a downtrend after the $ 336 local peak. Prices above the $ 245 main support are also on the breaking point of the downtrend. In the 4-hour period, the MACD is moving the maturity lines above the reference zone, while the momentum is horizontal. It is positioned as the first resistance for the pair in the short term in the $ 271 Fibo'50 tranche. 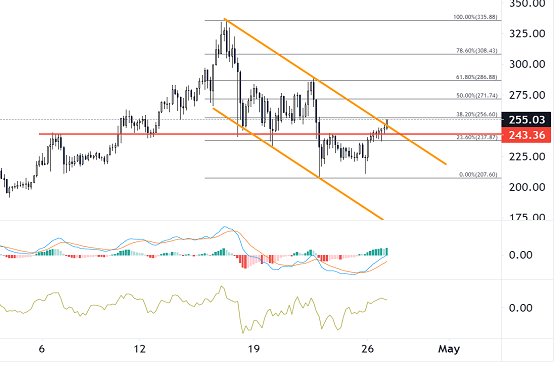 Chainlink is up 2.8% this morning, pricing around the $ 36.20 zone. Chainlink, which has the largest market capitalization among Ethereum consensus tokens, stands out with a monthly return of 36%, while it is 16 points behind Ethereum's 52% return. This shows that it maintains its 16-point potential.

If the LINK / USD parity is examined technically, the double bottom formation seen in the 4-hour period has been approved with the break of the $ 35.40 level. Above $ 35.40, it will carry the formation target to $ 40.00. This gives a 10% formation target over the instant price. For the pair, the Fibo'50 zone is positioned as an intermediate resistance zone above $ 37.00. 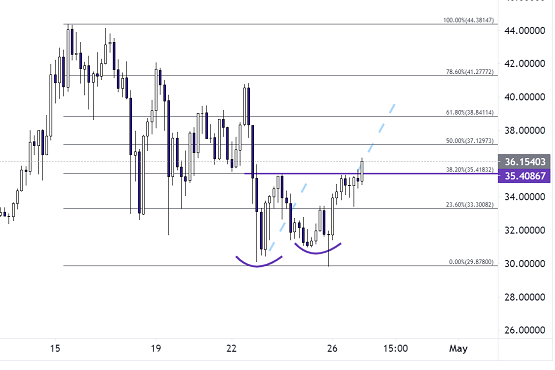 Basic Attention Token  is pricing in the $ 1.22 region, up 6% this morning. For the pair, the breakdown of the bearish trend with pricing above $ 1.15 made selling pressures behind. The $ 1.25 level above the Fibo'50 zone is the first resistance, while the double bottom formation target is around $ 1.37. The outlook is positive and bullish. 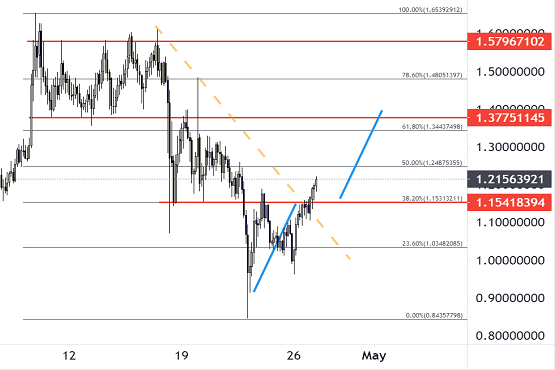