Bitcoin rose by 5.28% yesterday evening and broke a record for the first time, exceeding $ 29,000. Climbing to an all-time high, Bitcoin continues its bull run before Christmas. Institutions rather than retail investors are thought to have driven this record-breaking rise.

Gazprom, Russia's leader, and the world's 10th largest oil producer, opened a venue for cryptocurrency mining in one of its oil drilling facilities in Siberia and made the power of Russia's oil and natural gas resources ready for the needs of Bitcoin mining. The company has its own power plant that converts gas into electricity.

Jed McCaleb Sold 1.2 Billion XRP in 2020
Data released by Whale Alert stated that Ripple co-founder McCaleb sold 1.2 billion XRP this year. McCaleb, who still sent XRP to his wallet after leaving the company in 2013, earned about $ 411 million in 2020 with XRP sold at an average of $ 0.34. McCaleb stopped XRP sales 2 days after the lawsuit against Ripple.

Latest Statement on the Case from Ripple

Ripple, which will hold the first hearing of the case with the SEC in New York on February 22, 2021, referred to the investor grievance caused by describing the case largely as an attack on the cryptocurrency industry. Stating that the water was unnecessarily clouded, Ripple added that most of its customers are not in the US, adding that the company is looking forward to the hearing and as a result, the cryptocurrency industry may finally gain clarity.

One River Asset Management has committed that the $ 600 million Bitcoin fund they have in their portfolio will be $ 1 billion in 2021. The fund, which has become one of the largest Bitcoin investors, is another example that Bitcoin, which previously attracted individual investors, is now also attracting institutions.

In the post of analyst firm Glassnode, there was an analysis showing that 78% of the Bitcoin supply was illiquid. This rate corresponds to 14.5 million Bitcoins. Considering that the total Bitcoin supply is approximately 18.7 million, the Bitcoin used in trading transactions is only 4.2 million. This indicates a strong long-term prospect and a bull market.

Marathon, the largest mining company in North America, announced that they have purchased another 70,000 mining devices from the mining machine company Bitmain for $ 170 million. Thus, the company tripled the number of machines. A significant increase in productivity is expected in production activities.

National Football League famous American football player Russell Okung will receive half of his annual salary, which is $ 13 million, in Bitcoin from now on. Okung, in a tweet he shared earlier, stated that he wanted to get a salary with Bitcoin. The famous star thinks Bitcoin is a way to re-declare financial independence.

A crypto bank began opening physical branches in India through a joint venture between Cashaa and the United Multistate co-up Society. Customers who make physical transactions at branches can open bank accounts, buy and sell cryptocurrencies, and withdraw crypto-backed loans.

America's most well-known cryptocurrency exchange has announced that XRP transactions will be suspended as of January 13. Thus, Kraken remains the only major US exchange to list XRP. XRP made up 10% of the total volume on Binance US. Following the Binance US news, the XRP price declined from $ 0.22 to $ 0.20.

Bitcoin broke the record yesterday in the Asian session and reached a new record of $ 29,300. We started talking about $ 30,000 levels for Bitcoin. According to CyrptoQuant data, we see that the purchasing stages have become more frequent at $ 27,500 for the last two days. Both the entry of new institutional buyers and these buyers, which are seen at near-record levels, show us that the markets are eager. For this reason, it shows us that we are not far from the $ 30,000 levels. With this rise, Bitcoin achieved a market size of $ 539 billion and became one of the top 10 largest companies in the world, surpassing Warren Buffet's company Berkshire Hataway, the first company owned by Apple with market size of $ 2.27 billion.

When we consider BTC / USD technically; trading at $ 29,000 levels this morning, up 0.5%. It is progressing on the ascension channel in the hourly period. The channel upper band is also passing through the levels of $ 29,600, and the $ 28,300 levels are in the foreground and constitute the horizontal band in the withdrawals. Reactions that may come from support in transactions in this band range are within the potential scenario. Momentum and MACD support the rise in the daily period as well. The outlook is positive and bullish. 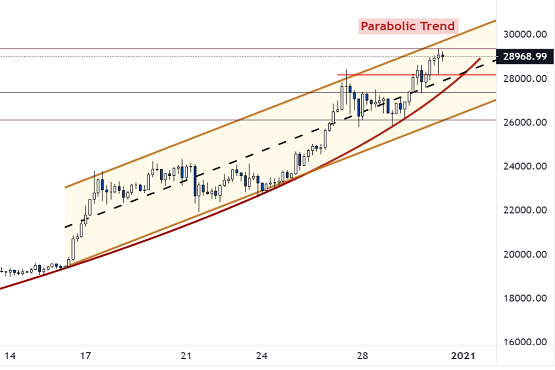 Ethereum has continued to rise, breaking the $ 750 level for the first time in 31 months. This morning it is pricing at $ 741 levels with a slightly sideways and sellers course. Ethereum, which is a little behind in earnings, with Bitcoin dominance rising to 71%, still performs well. Although some sales continue in the Grayscale Ethereum fund, we see that the funds have received 270 thousand ETH in the last month. Therefore, the trend is up, although it is sometimes lost in daily changes.

When we consider ETH / USD technically; There are horizontal transactions in the range of $ 720-750. The fact that the trend is in the upward direction allows it to find an upward reaction from the supports in pullbacks. The outlook for ETH / USD, which continues to rise in the continuation of the movement, is positive and in an upward trend. 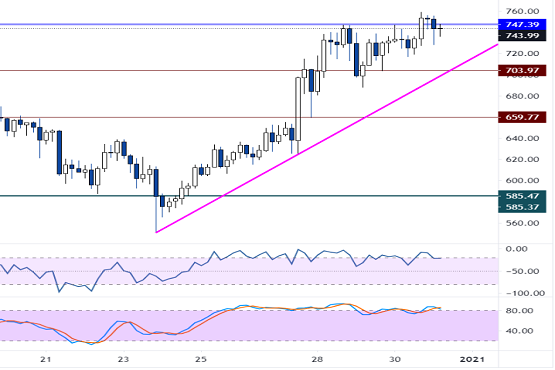 The AVAX / USD pair is pricing around $ 2.85, down 2%. We can see pricing at $ 3.10, which is the Fibo'23.60 retracement level, along with the reactions we may encounter from the $ 2.80 levels. However, the AVAX / USD parity has not been able to leave the major downward trend, since December 24, it has been in a horizontal view, and continues its weakness with sellers. 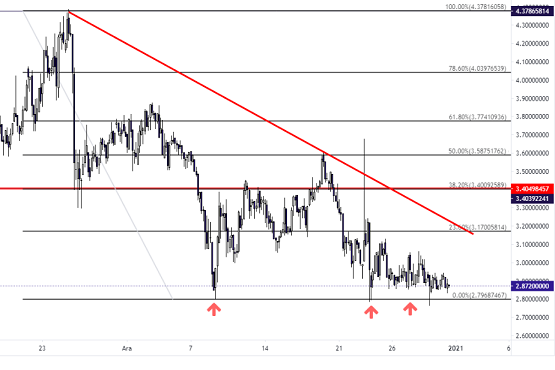 The XRP / USD pair is priced around $ 0.21 in the morning, with a 0.2% depreciation. Although it provides a positive return of 5.4% on the basis of weekly earnings, the monthly value loss is around 70%. In the latest developments reported, only Kraken was left to list XRP, one of the major US exchanges, after the XRP was also excluded from the list by Binance US and the transactions were stopped. This latest development has not had a big impact on prices. The fact that the expectations were in this direction and that it remained off the list from the US major exchanges was the most popular of the bad scenarios established in the name of XRP. Thus, small-scale positive movements can be expected from now on for XRP, which has already faced and priced the most unfavorable situations it may encounter. However, it should not be forgotten that these moves are not expected to create a bullish trend, and caution should be exercised for upward positions in the long term and the main trend is still stronger downward.

When we consider the XRP / USD parity from a technical point of view; With the completion of the double top formation, we see that the price declined to 0.17 dollars with a small recovery and priced around $ 0.21. Although it had risen by 35% the other day, we considered it as a short squeeze (fall of selling positions to the margin). After this short-term movement, the XRP / USD pair continues to exhibit its weakening stance. However, in possible upward reactions, possible upward reactions towards pricing at 0.2190 for XRP and then to 0.2280 may come into question. Developments in the parity, which continues its weak course, will be followed closely. 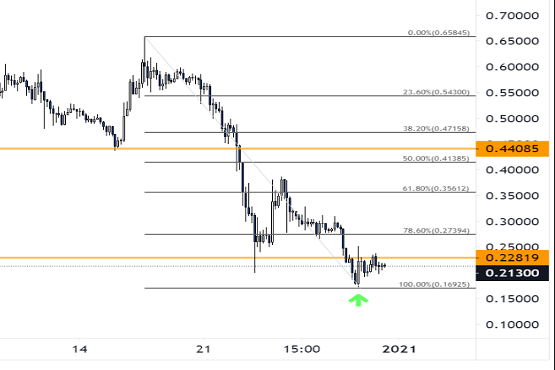 Litecoin is priced around $ 125, down 3.3% on the last day of the year. It continues to compete for the fourth place with XRP after the sharp drop in XRP. The negative news of XRP can enable Litecoin to increase its credibility by expanding its investor network. With its very high correlation with Bitcoin, its pioneering movements are also followed for Bitcoin.

If the LTC / USD pair is technically taken into consideration, we are closely following the $ 124 price support for the pair, which continues in the bullish channel it started in mid-December. We can talk about pricing around the target of $ 110, with the $ 124 level breaking down after the descending triangle formation it created. However, the confirmation to be obtained with a break is very important. While Bitcoin continues to rise, the divergence in LTC leaves you in a dilemma. In possible dips, pricing below $ 110 in the pair may be a place of reaction due to support. If the pattern does not break the $ 124 level and holds here or makes upward moves, the $ 140 band may come to the agenda. Movements within the bullish channel continue, the outlook is positive but horizontal. 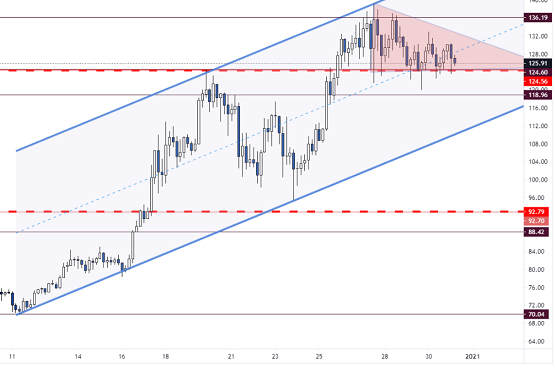 When we examine the LINK / USD parity technically, it is watching the declining channel it has created since December 22. Currently, it is priced around $ 11.6, with a value loss of nearly 3%. There is a 1% decrease in weekly returns. While LINK / USD trying to hold on to the $ 11.4 band is still unable to give the image of a stronger recovery, pullbacks resulted in a reaction force, including our $ 9.40 main support and our $ 11.40 interim support. 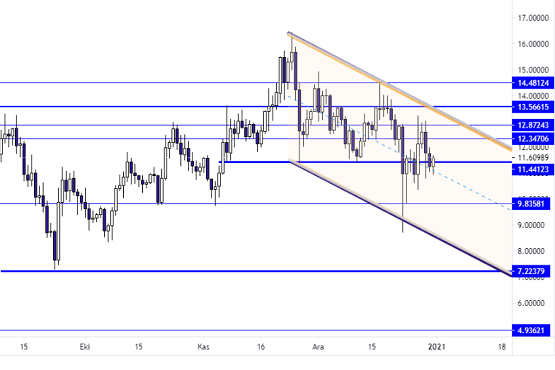 BAT / USD pair is priced around $ 0.19 today with slight sellers. The parity, which could not maintain its horizontal course in the last days, broke down the 0.20 level in the Fibo'23.60 correction and showed pricing in the lower regions of the downtrend. Sales pressures that occur after breaking the 0.20 level may increase and bring 0.18 levels into the agenda. The outlook is weak and seller. 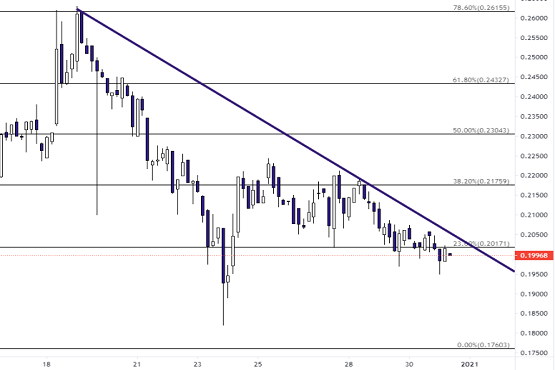