In a CNBC interview, world's largest asset management company BlackRock's CEO Larry Fink has stated that cryptocurrencies could turn into a great asset class. Expressing his admiration for crypto, the Fink has also stated that he is aware of the potential of the crypto industry.

Swiss arm of the French insurance giant AXA has now started accepting Bitcoin for all insurance payments except life insurance. According to the company's statements, other cryptocurrencies can be accepted as payment in the future.

Crypto Assets Report From the CBRT

According to a report published by the Central Bank of the Republic of Turkey, the use of crypto assets as payments will be restricted. Payment and electronic money institutions will no longer be able to intermediate platforms that offer trading, custody, transfer or issuance services for crypto assets, or the fund transfers from these platforms.

French Bank Issues Its Own Token

In an official press release, Société Générale, the 17th largest bank in the world, announced that it has issued its first structured product by using Tezos’ blockchain network. The new investment tool called EMTN can be used in countries other than the USA and Canada. In the statement made, trust in blockchain technology was emphasized.

Chainlink has published a whitepaper outlining its plan to create the next generation of decentralized oracle networks. The paper shows that Chainlink makes strong planning involving NFTs, stablecoins and the DeFi space by combining hybrid smart contract applications with blockchain.

In line with the rise in the cryptocurrency market in the last week, we see that there are profit realizations this morning, and with this, Bitcoin has reached the level of $61,400 from the $64,900 zone with close to 3% sellers. However, it is seen that small wallets up to 100 BTC sell BTC; the wallets of 1,000 BTC and over choose to accumulate; at the same time, miners do not prefer to sell either. Although the continuous sharp increase in funding rates in the last week has shown that a short correction may come, this period was pushed forward due to the IPO on the Nasdaq the previous day.

When we consider the BTC/USD parity technically, the double top formation has been confirmed with the downward crossing of $61,800. If the reactions do not break this level again, it could take a trip back to the $60,400 and $59,200 levels. Momentum is also with the downtrend but we are in the bullish channel and at the same time, the uptrend formed within this channel is exactly at the $59,200 level. For this reason, pullbacks can be qualified as profit sales and we cannot talk about trend reversal for now. 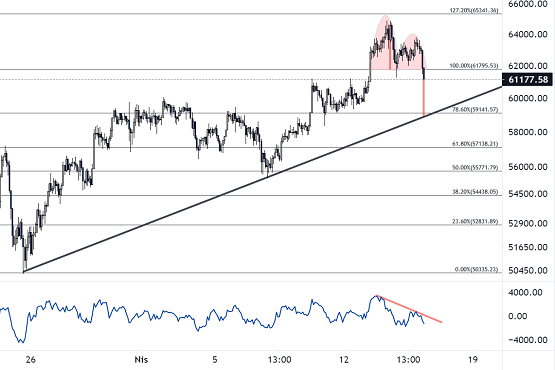 After the realization of the Berlin hard fork in the Ethereum network, we see that the gas fees have decreased by 8% in the last 24 hours. With this positive news, Ethereum is pricing at $2,400, with a 4.5% retracement along with the overall market. After the Berlin hard fork was completed, the 2.0 transition of the network was also halved. We will have Optimism L2, London hard fork and EIP 1559 improvement, which was postponed to July. For this reason, a rapid summer can be experienced and if the calendar is not interrupted, it can continue to monitor the continuation of Ethereum's movements in the medium and long term.

When we consider the ETH/USD parity, the reaction started to come from the previous high, the new support level of $2,400. With this reaction, DeFi and altcoins can also be expected to move. Because if the bottom band of the channel where ETH pullback is broken upwards, the correction may end and the uptrend may begin. The outlook is positive. 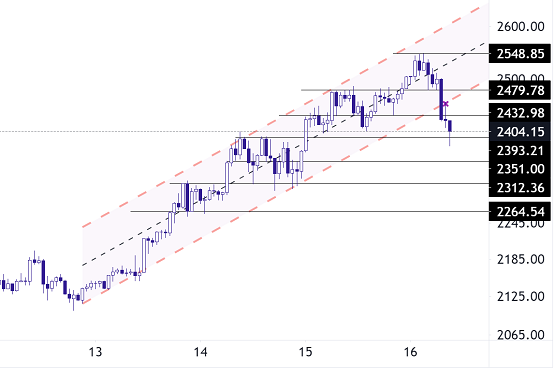 The AVAX/USD parity retreated by 4% this morning, pricing at $35.50. A new application that will start working on the Avalanche network will provide users with more opportunities in cross-chain DeFi applications. At the end of this month, Avalanche users will be able to transfer Bitcoin, Litecoin and the mentioned application token between their chains.

If the AVAX/USD parity is examined technically, the Fibonacci 61.80% slice has put pressure on the parity, which could not hold the $40.50 local peak. Short-bodied 4-hour candlestick closings in the $37.00 channel middle band concentrated on the sales side, causing sags below the channel mid-band. Having an intermediate support of $33.50, the next level of support for the parity is a $32.40 slice. If the price movements are on the rise again, it may be possible with the parity climbing to the middle-upper band of the channel. This requires a persistence of $37.00 and above. 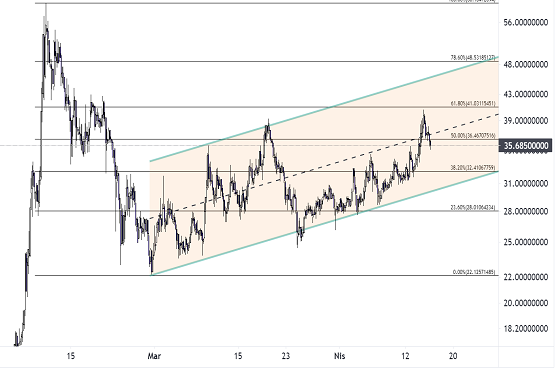 Ripple is in the $1.63 zone this morning with a 7% price drop. The positive developments in the lawsuit between SEC and Ripple led to an increase of 63% on a weekly basis, as the volume in XRP parities approached Ethereum transaction volumes in the past days. Profit purchases lead to some correction and although the market volume is shifting to the other direction with the movements in the macro part, it creates short-term negative movements, but XRP potential is preserved in the medium term.

When the XRP/USD parity is technically considered, the parity is accompanied by a 15% correction after the $1.96 local peak, while a new descending triangle is on the verge of breaking. The triangle formed on the hourly chart can create accelerated movements for pricing depending on the direction of the breakdown. Responding from the $1.65 support, the parity could restart a bullish scenario by crossing the $1.75 threshold, with oscillators showing signs of recovery from the lows. However, retracements are signaling $1.25 for the parity, which continues the correction move with the addition of profit purchases. $1.46 is the intermediate support level. 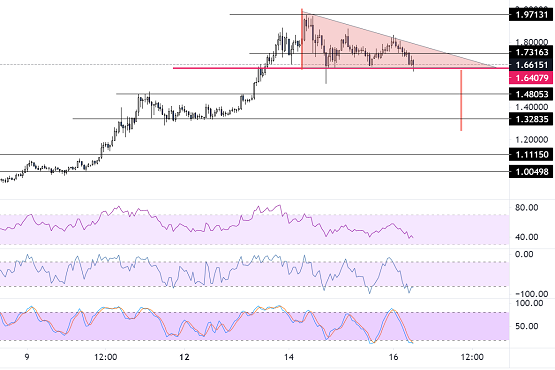 Litecoin is in the $282 price zone with a 1% retracement this morning. Litecoin, which is 28% in weekly performance and 38% in monthly performance, has shown a successful performance compared to the top ten crypto currencies in terms of market value this month. We continue to include pricing of $380 in our medium-term goals. The upward trend in active and new address numbers is preserved.

If the LTC/USD parity is examined technically, the parity has moved its response from the $250 zone to the $296 channel upper band. Although there is some retracement afterwards, it maintains its course in the middle-upper zone of the bullish channel in general view. It is located above the $276 support level Fibo'127.20 zone in pullbacks. At $262, the intermediate support level and the reaction purchases made over these levels could enable the upper channel to be tested again. 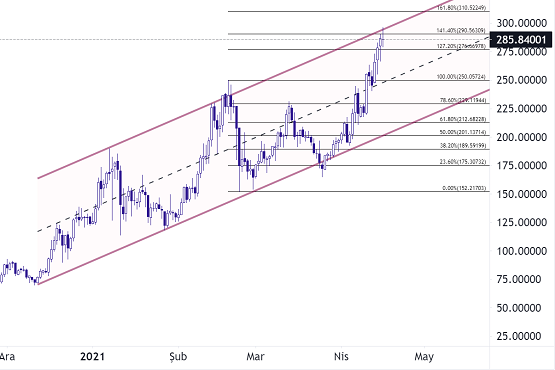 Chainlink developers have released a whitepaper for version 2.0 of the platform based on hybrid smart contracts. The whitepaper titled Chainlink 2.0 proposes seven basic improvement protocols in the LINK network. Offering improvements such as scaling, privacy, and hybrid smart contracts, Chainlink reported that it will extend these applications to phases in the long run. Stating that they aim to grow by 10 times, Chainlink team continues to support LINK, which we always see as one of the best value investments in the long term, in line with expectations.

The LINK/USD parity is retreating by 2% this morning, pricing in the $41.67 zone. The short-term correction of the parity, which saw price pressure by 5% after the record of $44.00, is read positively. The indicators analyzed on the daily chart, MACD and Momentum, remain above the bullish trend and are still far from the overbought zone. For the parity, where our $60 target continues, the initial resistance will be at the $43.50 level. The uptrend continues for LINK, although the changing maturity is taken into account with the factors related to the market buying appetite. 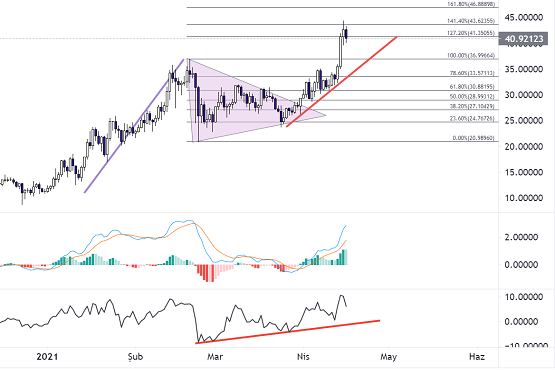 Basic Attention Token is retracing 2% this morning, in the $1.49 price zone. The accumulative period between $1.38 and $1.59 since April 9 has created a new flag formation for the BAT/USD parity. For the formation on the 3-hour chart, price closes above the $1.59 break zone must be received and a confirmation must be obtained. In the short term, its support is at $1.38. Pricing below this level, which will be monitored for reaction purchases, may invalidate the formation, so they should be followed carefully. Retracements to the $1.38 support are likely as oscillators have not yet moved on the lows. The flag formation target points to the $2.25 zone. 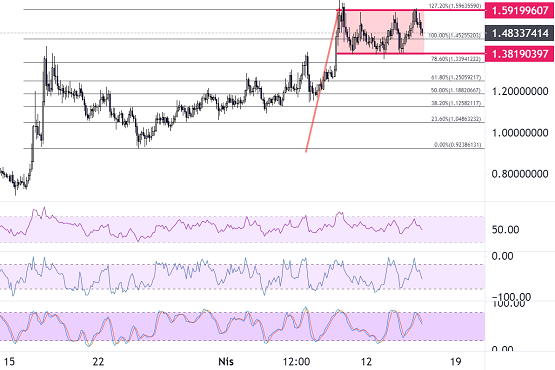