Chinese banking giant China Construction Bank (CCB) reported that it is considering selling up to $ 3 billion in bonds using blockchain-based technology. It will allow investors to buy bonds, cryptocurrencies such as Bitcoin, or cash in sales transactions.

It has been announced that all active PayPal account holders in the US can now buy, hold, and sell cryptocurrency directly with PayPal. Due to the excess of demand, PayPal's weekly purchase limit has been removed for cryptocurrencies.

In the statement made by the CBRT, it was stated that the work of the new payment system called FAST (Instant and Continuous Transfer of Funds) was completed, and it was announced that transfers between different banks could be made 24/7 within seconds. FAST pilot implementation will start with 11 banks and the limit will be 1.000 TL. Transactions can be carried out via e-mail and phone numbers without Iban.

Kirobo, a Tel Aviv-based startup known for developing a product that reverses erroneous Bitcoin transactions, has redesigned its project to work on Ethereum. In this way, it sharply reduces the level of anxiety users feel when transferring money to a third party.

Bitcoin is trading at around 16,200-16,300 against the dollar this morning. With the purchases from yesterday, we see that the factors that support these purchases come from the safe harbor demand, as we have exceeded the $ 16,000 level we have been tracking for a while. Trump's sanctions against Chinese companies, Powell's announcement that the next few months will be tough, and the increase in COVID cases that negatively affected Asian stock markets supported these purchases. On the other hand, Bitcoin's Fear and Greed Index has risen to 87 and signals that the market is overbought and may be in a correction, which we will examine on the technical side.

When we consider BTC / USD technically, even though it is priced in the region of 16,200, we still follow the movements sticking to the upper band of this channel due to the slope of the bullish channel. We haven't seen a break yet. There should be a hold above $ 16,300 so that the upper band of the channel breaks up and purchases accelerate. In such a case, there is no significant resistance up to $ 17,200. This break is necessary so that this possible rise is not a bull trap, otherwise correction expectations may increase. 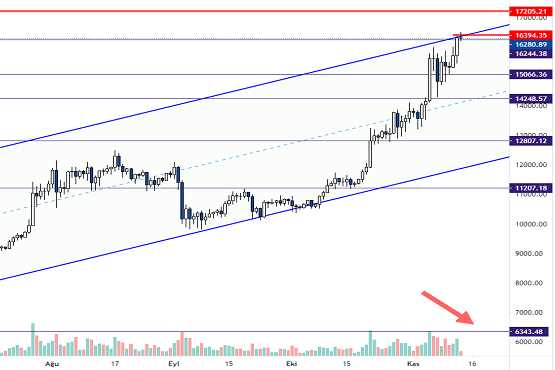 Ethereum is trading around $ 460 against the dollar this morning. In ETH, which has not been able to break this resistance since the beginning of the week, DeFi's on the other side started to collect funds and attract attention again. As the December 1 date approaches, the expectations of the market to move to 2.0 are decreasing.

When we examine the ETH / USD technically, while the pennant formation continues, pricing continues above the middle band of the channel. Therefore, it can be approached from the perspective of holding the $ 460 instead of holding it here. The $ 455 level will be followed during the day, which is the major support. If it falls behind here, selling pressure for ETH may increase. 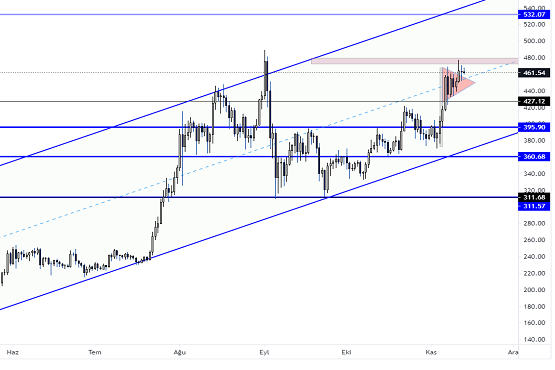 AVAX maintains its rising appearance it has presented in the last days and is watching around 1% buyers. Ethereum 2.0's latency could benefit coins using Proof of Stake technology such as AVAX. In technical view, AVAX / USD is recovering at the lows it has seen in recent days. Until yesterday, Momentum and MACD indicators have been giving a common positive signal, but today we see a discrepancy between the two. 3.60 and 3.75 are important resistances we watched throughout the day in the upwards, and if it cannot break these points, it will create a short-term descending trend. The disagreement and its failure to break these levels for days is negative news for AVAX / USD and the outlook is horizontal for now. 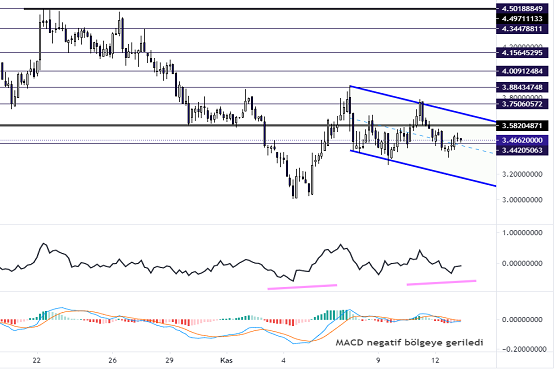 Used as a payment and transfer tool, Ripple, which is in fourth place with a market capitalization of over $ 11 billion, is trading at $ 0.2565 this morning, up 1%. On November 5, Ripple published its quarterly XRP Markets Report to "voluntarily provide transparency" to the company's views on the state of the XRP market. He stated that the Ripple company is actively buying XRP. It was announced that XRP purchases could continue to support healthy markets. Despite the stable movements in the markets, the positive effect of the news continues.

When we consider XRP / USD technically, the uptrend that started on November 3 continues. XRP / USD, which traded around $ 0.2558 this morning, remained somewhat weak in its recent gains. Finding support at $ 0.2525 in yesterday's trading, XRP / USD rose up to $ 0.2575 in the morning. Ripple, which could not overcome its previous highs, has created lowering hills in this direction in the short term, which again causes sales pressure in its day-to-day reactions. The breakdown of 0.2600 level is important in order to accelerate the purchases during the day. The outlook is in an uptrend in the short term. 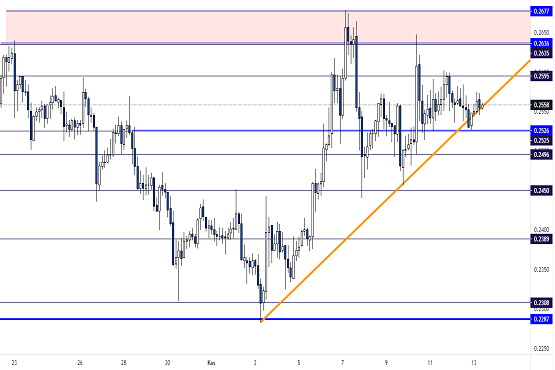 Although Litecoin retreated from $ 60.60 to $ 57.90 yesterday, it rose again by close to 2% with the appetite to recover its losses. Litecoin has a correlation coefficient of 0.88 with Bitcoin. (= 1 super correlation) With Bitcoin breaking $ 16,000, the movements in LTC were similar to the correlation. As Bitcoin continues to hold above $ 16,000, we can witness similar increases in LTC.

When we consider the LTC / USD technically, it has drawn an upward channel by creating a secondary outlook within the main downward trend that has been going on for about a year and has been ongoing since February. The first technical rule to be considered in LTC moving within this channel band will be to break the main descending trend. This level will be monitored throughout the day, as it will mean a break if it makes persistent closing above $ 62.00. For now, momentum and MACD indicators are showing positive signals close to this resistance. While Parabolic SAR supports the buying direction, 62.00 trend resistance and 63.20 also Bollinger upper band are the tough resistances ahead. Although we are in the resistance zone, the outlook continues in the positive direction in the bullish channel. 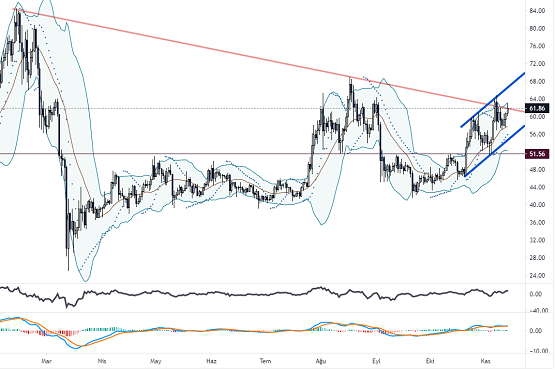 After rising as high as $ 13.10 yesterday, LINK / USD could not hold in this zone and retreat to $ 12.24. Increasing 2.5% in the morning hours, LINK is priced around $ 12.65-12.75. The DeFi industry, using the Ethereum network, officially took flight after reaching a total lockdown of $ 1 billion in February. The industry is now 13 times more valuable than February. LINK, which is among the most interesting currencies among DeFi projects, has gained 6 times the value since the beginning of the year. LINK, which has less correlation with Bitcoin than other altcoins, is similar in transactions at the rate of 0.65. Despite the volatility in the Bitcoin and altcoin markets, LINK's value moves very limitedly. With the Ethereum 2.0 update, positive movements are expected to be observed again. 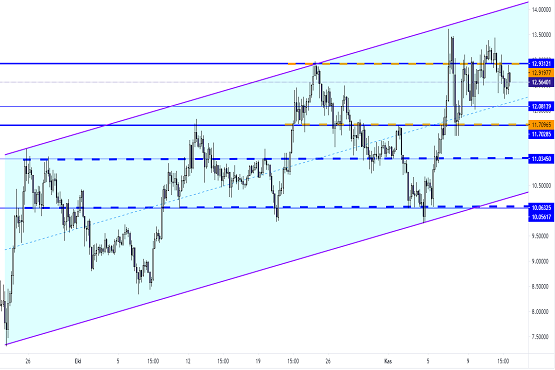 During the pandemic process, e-commerce sites were highly premium with the bans. With the news of vaccines coming and starting to be implemented, the sectors that were premium during the pandemic period started to be sold. If vaccine developments are not as expected, we can see a recovery in this market again. The digital marketing currency BAT / USD is trading around $ 0.2000, with buyers at 1% in the morning.

Although it tries to break the descending trend that started at the end of October 4 times, it is trading downwards in the current trend. Yesterday, it retreated somewhat as a result of attempts to break resistance at $ 0.2060. Although there is not a strong outlook in BAT / USD, which is still trying to break its resistance today, the level of 0.2040 may show the resistance of this trend and if it is passed, it may sag towards 0.2140 as it has done before. There is a tendency to recover in the short term, but the outlook is not strong. 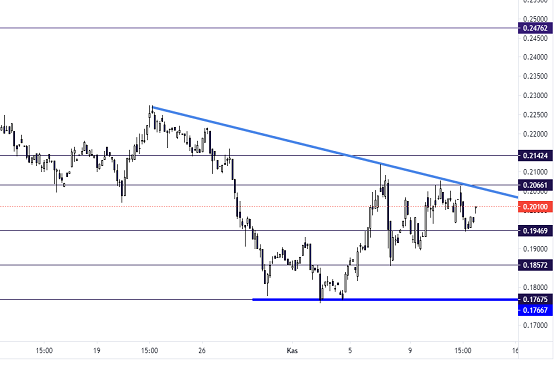