PayPal plans to increase its crypto opportunities for the UK in the coming months. Thus, UK citizens will be the first outside of the US to be able to use PayPal to purchase crypto.

The first publicly available Bitcoin exchange traded fund (ETF) in North America was approved in Canada. According to the decision document, the approval receipt from the Ontario Securities Commission was approved under the Multilateral Instrument passport system in multiple jurisdictions of Canada.

In the last two days, 40 million XRP has been sold from the wallet of Jed McCaleb, former co-founder of Ripple, named "Tacostand".

UBER Will Start Receiving Payments With Bitcoin
Dara Khosrowshahi, CEO of UBER, who joined CNBC, explained that they are considering accepting Bitcoin and cryptocurrencies while talking about UBER's future plans. These steps to increase the quality of service will enable customers to make UBER payments with the cryptocurrencies they own. UBER serves in more than 60 countries.

Bank of New York Mellon Corp., the oldest bank in the USA, announced in its announcement that bank customers can use their accounts to store and transfer Bitcoin. Regelman, responsible for BNY Mellon's digital branch, stated that high-end customers are requesting Bitcoin and cryptocurrency services.

Although the bull rally atmosphere increased with the expectations of 2021 after Tesla's purchase of Bitcoin, the pricing of 100 thousand dollars in the Bitcoin options market at the end of 2021 is 12%. The odds of 70 thousand dollars and above are priced at a rate of 21%.

Yellen Made New Statement About Cryptocurrency

US Treasury Secretary Janet Yellen, known for his negative attitude towards cryptocurrencies, said in his statements on crypto currencies, "I can see what the new technology promises, but crypto coins are used to launder money and finance terrorism." said. He defined the widespread use of cryptocurrency as a "growing problem".

Mad Money host Jim Cramer congratulated Elon Musk and Tesla on their Bitcoin investment. According to Cramer; Bitcoin investments by corporate names such as Tesla, Mastercard and Paypal will turn into a flow among large companies, and then many companies will follow this trend and invest in BTC with their cash assets.

The amount of ETH staked on the Ethereum 2.0 blockchain broke a new record and reached 3 million Ethereum. Thus, for the 2.0 update, 5.4 billion USD worth of ETH was staked. The number of active validators approached 85 thousand and an average of 365 new validators join the system during the day.

Amazon Launches a Project to Make Payment with Cryptocurrency

Amazon is preparing to launch a digital currency project in Mexico. In the job advertisement for the project, it is stated that customers will benefit from all online services by converting fiat money into digital currencies. Thus, Amazon has taken another step to bring its impact on the Internet economy to the digital dimension.

Bitcoin is trading at $ 47,400 this morning. After two records coming yesterday, the $ 48,910 zone became ATH. Following the recent tweet news-based rises on Twitter, the investor profile, which is always on guard, evaluating possible increases and increasing profit appetite, stands out. Due to their appetite to take profit, the period of holding positions also shortened. On the other hand, although stablecoins kept in stock exchanges increase with on chain data, there is no significant change in the amount of stablecoins that are newly sent. This situation provides space for investors to act instantly in case new opportunities arise in stable coins. The absence of stablecoins held in stock exchanges also supports Bitcoin and other altcoin prices and plays an important role in keeping the market from shrinking.

When we consider BTC / USD technically, the steep trend with higher slopes formed on the continuation of the upward trend is passing at $ 46,500. Currently, the on-chain data indicates a stable situation rather than a decrease or a rise. Therefore, although we see profit sales in the continuation of the rise, our band is in the range of $ 46,500-50,000. The view is horizontal and positive. 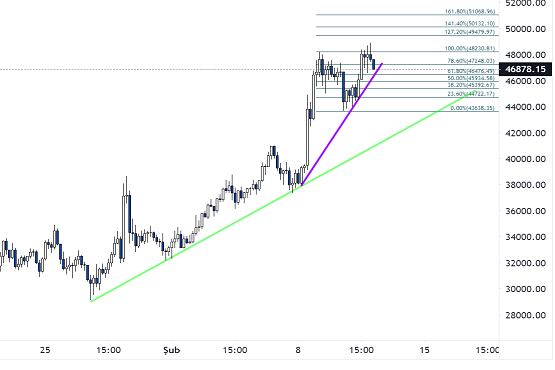 Ethereum is trading at $ 1760 below 1.5% with some profit sales this morning. The trend in the number of Ethereum active and new addresses displays a more positive image than BTC. Also, the amount locked in the Ethereum 2.0 testnet exceeded 3 million ETH. The number of validators also reached 85 thousand. Although we cannot see a peak simultaneously with BTC in terms of price, the chain and basic data of ETH are more positive than BTC.

When we consider ETH / USD technically, the wedge formation, which is the harbinger of a downward correction, stands out in the bullish channel. The $ 1880 level that the ascension channel crosses is also the upper band of the chock. At this intersection, if the lower band of the rising wedge is passed below $ 1700, the $ 1650 and $ 1550 levels may come forward in the withdrawals. MACD gives four hours of negative agreement. For this reason, ETH, whose basic data looks positive, some withdrawal seems technically possible. Since the foundation is strong, such withdrawals are usually met by purchase in support. 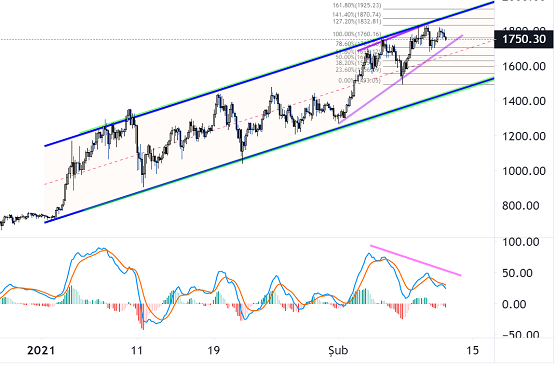 Due to the problem experienced yesterday in the Avalanche network, prices were less voluminous and at times weak movements were observed. After solving yesterday's problem, there is a further recovery in prices this morning and AVAX / USD is trading at $ 47.70, gaining 1.5%. The problem occurred after the Pangolin update, which was a bridge update between Avalanche and the ERC network, but the idea and project were correct, and the price responses after the problem solution brought along.

On the technical view, AVAX / USD is in the Fibo'50 and '38 range of $ 43.70-47.55, which corresponds to the 20 zone. If the horizontal likes break in the bullish course, purchases can be traced towards the next correction zone at $ 52.30. It is necessary to make good use of the midpoint of Fibonacci. If it is above the 50% region, it can react and look at short-term peaks as resistance. 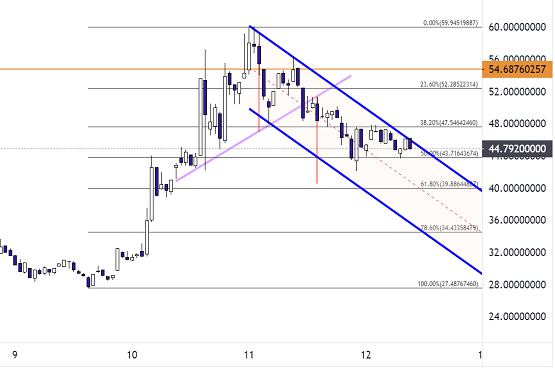 The XRP / USD pair is pricing at $ 0.5530, up 4% in the morning hours. The positive trend for XRP continues as the critical day of the trial with the SEC approaches (February 22). A transaction from the wallet of McCaleb, the former co-founder of Ripple, leaked to the market yesterday and it was found that there were 40 million XRP outputs from the wallet. The balance in McCaleb's wallet is 499 million XRP. McCaleb's XRP sale takes place at the same time every day, in agreement with Ripple. However, since the lawsuit date is approaching, more caution should be taken and the stop loss option should be considered.

When the XRP / USD parity is examined technically, the triangle formation formed and the $ 0.5000 confirmation level can be seen. Formation confirmation was obtained with the upward break of the confirmation level and marks the $ 0.6900 level. The $ 0.5000 support level will be watched for possible pullbacks and this level also reinforces the support potential as it coincides above the uptrend. The continuation of the uptrend is the initial resistance of $ 0.5850 followed by the formation target of $ 0.6900. The increase is stable, but the moves of investors who do not want to take risks should be taken into consideration, stop loss should not be forgotten and portfolio diversification should be made. 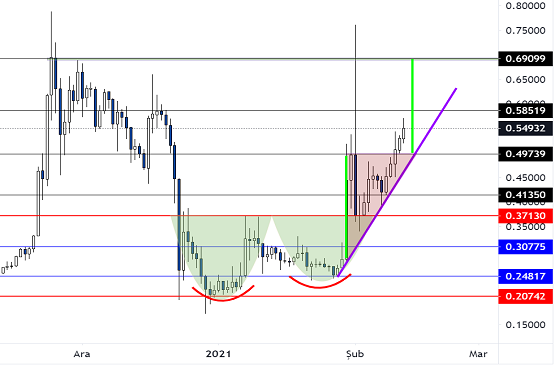 Litecoin has been withdrawn on the last day of the week after a record of $ 195 on Wednesday, with some profit selling and is priced at $ 183. Litecoin was one of the cryptocurrencies that remained on the negative side in monthly returns last week, but this week, it has become positive on a monthly basis with an increase of 18%. Grayscale received 37,000 LTC in 24-hour change, and its weekly intake reached 50,000. On the basis of today's purchases, we see that the demand for Litecoin, a large amount, continues by investors. Its correlation with BTC has increased to 0.96, and BTC is setting new records. On the other hand, in this period where payment giants such as PayPal and Mastercard made it easier for investors to get in touch with cryptocurrencies, such as using ATMs and cards in trading. Litecoin is the second coin which has the most number of ATM after Bitcoin, and this number has exceeded 9 thousand. The news that Litecoin Card will be integrated into Litecoinwallet within a week was reflected in the prices in basic terms.

When the LTC / USD parity is examined from a technical point of view, it is seen that the prices are below $ 183. This is an important support level, and closings below this level could bring the $ 166 support level back to the agenda. When $ 175 breaks down, a double top pattern will be created and the pattern is pointing around $ 160. However, on the 4-hour chart, an uptrend channel formed as of February is violated and prices occur in the upper band of the channel. The channel mid-band is at $ 180 and a break below this level could bring the channel sub-band to $ 166. The $ 183 level should be followed as the critical level. 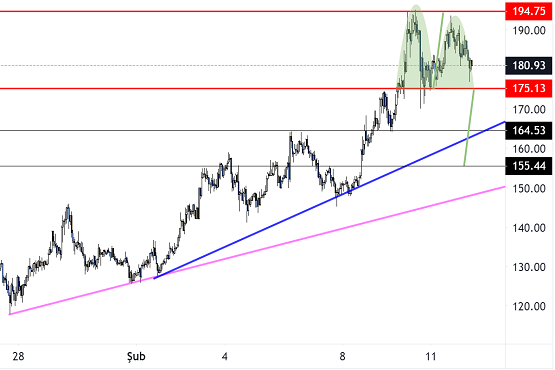 LINK is pricing around $ 27.30 with a 2% retracement this morning. LINK is almost the least affected and the most stable coin from the general market situation. One of the reasons for this may be that most of the circulating supply is held by several whale accounts over the long term. On the other hand, DeFi market cap broke the record again, exceeding $ 40 billion. This could support the increase in demand for LINK in the medium to long term. Because LINK is the DeFi coin with the largest market cap.

When the LINK / USD parity is examined technically, it is seen that the prices holding above the support of $ 27.00 in the 4-hour period have brought the $ 28.65 level into resistance. The outlook is positive but calm because the cruise takes place in the mid-lower band of the channel. As the course is horizontal, the Williams% R, Stochastic and RSI oscillators are more suitable for the pair. The intermediate supports of the oscillators are just below the oscillator line and the line ends are pointing up. This counteracts the upside response from the channel bottom band of $ 26.50 on oscillators basis. Movements over this level will follow the $ 28.50 resistance and $ 30.00 level next. 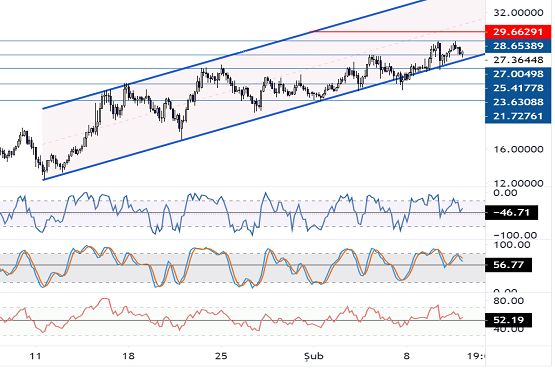 BAT / USD increased by 85% in the past week to $ 0.68-0.70 levels. In our Crypto Zoom videos that we upload on YouTube every morning, we stated the $ 0.70 levels four days ago and made a BAT-ALGO comparison that they both carried similar graphics. Currently, the flag formation on the hourly charts has a technical outlook that the uptrend will continue. In flag breaks, the flag length extends towards the $ 0.91 region and gives target values. The outlook is positive on the upside. 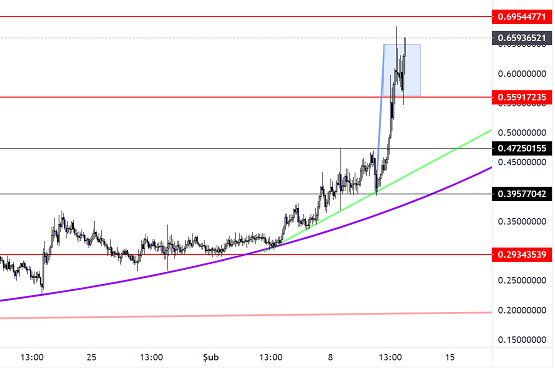