In the US, the Head of the Internal Revenue Service (IRS) has requested authorization from Congress on the regulation of cryptocurrencies.

Goldman Sachs backed a $28 million funding round for Blockdaemon and invested $5 million in the blockchain infrastructure firm.

MicroStrategy has increased its bond sale, which it announced as $ 400 million, to $ 500 million in order to buy more BTC.

PayPal Traded $2 Billion In Cryptocurrency In May

PayPal traded approximately $2 billion worth of BTC, ETH and LTC in May, while setting a new record with a daily transaction volume of $300 million in the last week.

Ripple Asks for Suggestion on Expanding XRP Ledger or XRPL

Ripple's developers will gather feedback to integrate functions such as smart contracts while arguing that using sidechains rather than expanding the ledger will preserve efficiency.

The World Economic Forum has released a policy toolkit aimed at providing guidance to regulators and policymakers for regulation in the DeFi field.

Several Kenyan banks have warned crypto traders to be mindful of the risks. The warnings are said to have gone to customers using credit and debit cards on crypto exchanges.

It has been stated that White House Technology Advisor Tim Wu has between 1 million and 5 million dollars worth of Bitcoin.

The Danish Ministry of Taxation has acknowledged that the tax law is not sufficient for the taxation of cryptocurrencies. While punishing those who filed falsely in cryptocurrency taxation, your goal is to; keeping the rules up to date, limiting errors and fraud.

Shares of Support for BTC from Latin American Politicians

We think that if Bitcoin recovers its appearance in the frightening BTC pricing by falling back to the 30 thousand band yesterday evening, instead of seeing a significant deterioration in metrics, we think that investors may participate in the reverse FOMO due to Yellen's statements that the Fed may increase interest rates earlier than expected and overlapping regulation news. For this reason, while there is no new money flow in the market, the selling of existing positions by small investors at a loss also causes selling pressure on the price. While MicroStrategy increased its bond borrowing to $ 500 million, the offer of $ 1.6 billion was found positive. The daily amount of BTC issued from exchanges amounted to $ 983.7 billion.

When we consider the BTC/USDT parity technically, although the purchase volume from 31 thousand is not very strong, 30 and 31 thousand dollars levels gain importance in the near term. As this region will disrupt the expectations of the entire market, the 30 thousand region has now become the last point. While the $36,000 level is our main resistance in the hourly period, we have seen hard sales coming from here in the last days. 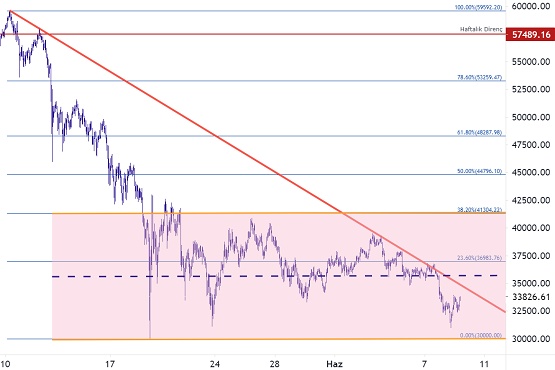 Ethereum is trading with over 1% sellers this morning. Yesterday, we mentioned that ETH could lose more value in the ETH-BTC scissors, which started the day with minus 4 percent, or that BTC would be faster in returns. Network transaction fees fell below $5 from lack of volume. Therefore, there is no attractive transfer transaction fee that can increase demand. In addition, 45.4 million dollars of ETH was transferred from wallets to exchanges yesterday. The Ropsten testnet will be released before the London hard fork will be released in July.

When we look at the ETH/USDT parity technically, although the rising triangle image starts to sag a little, it will want to rise above the $2500 level again during the day and hold on. If it sits above the current level and can break above the $2600 level, the targets could continue up to the $2750 levels. For now, we are in a downtrend in the short term. 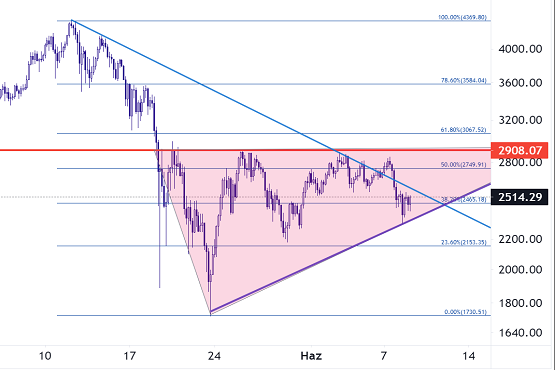 AVAX is priced at $14.24, depreciating by about 3.6 percent this morning. When we examine the AVAX/USDT parity technically, AVAX, which fell to the level of $ 13.65 with the sales prevailing in the market yesterday evening, has found support from the region close to these levels. When we examine it in the 4-hour period, we see that there is a positive discrepancy in the RSI. Although this shows that the pressure on the selling side has decreased, when we look at the stochastic in the same period, it gives a sell signal with a downward cross. Although the short-term outlook on the direction is uncertain due to the discrepancy between the two metrics, price movements towards $ 16.30 can be seen if AVAX, which is priced just below the descending trend that has existed since May 19, can break this trend upwards. 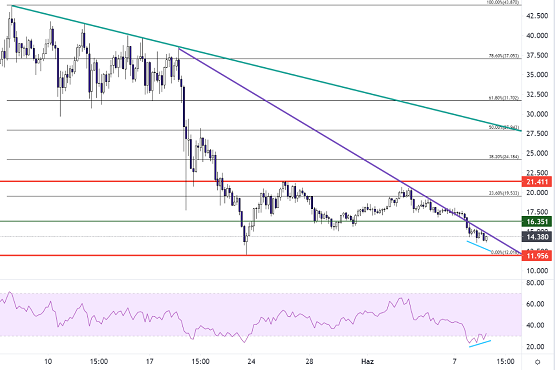 Ripple is priced at $0.852, depreciating by about 2.5 percent this morning. Influenced by the general selling pressure dominating the markets, institutional investor interest and positive news flow continues for XRP. After the SEC still did not deliver the documents requested for BTC, ETH and XRP, Ripple, who asked for a date to be determined, had reacted to the SEC's 60-day extension request. Although it is expected that there will be new correspondence for the litigation process soon, the general outlook is moving in favor of Ripple. Although the overall outlook for the short-term markets is uncertain, we think that as the markets start to recover, XRP will quickly price this positive process in the litigation processes.

When we examine the XRP/USDT parity technically, XRP, which broke the rising minor trend that has existed since the low level of May 23 on a daily basis, from $ 0.925 on June 7, found support at $ 0.784, which corresponds to the Bollinger lower band. The MACD, which we see continuing the buy signal in the daily period, has lost its upward momentum. Although there is indecision throughout the markets, we think that there may be a price movement towards the level of $ 0.9375 for XRP with the positive news flow, and if the selling pressure, which has stopped in the market, is repeated, we think that the support level of $ 0.7849 can be retested. 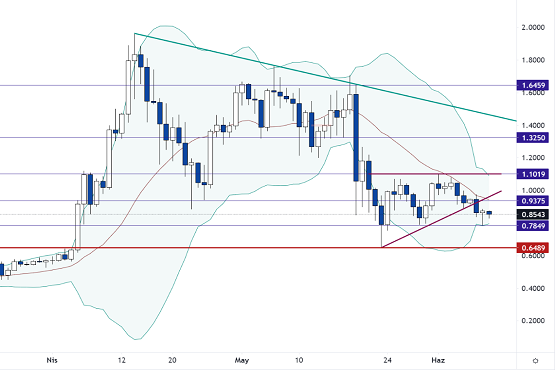 Litecoin is priced at $156, declining about 3 percent this morning. Technically speaking, LTC/USDT is priced below the secondary descending trend that has existed since May 10 yesterday. LTC, which last tested this trend on June 7, experienced pullbacks with resistance at $182. With yesterday's sales, LTC, which retreated to $146.40, which is the Fibo'61.80 tranche, found support at these levels. When we examine it in the 4-hour period, it rose to $ 163 with the stochastic buy signal last night. Unable to maintain continuity in the bullish movement, LTC is priced close to the $156.75 level, which is the Fibo'50.00 tranche. If there is a 4-hour close above $156.75, we expect moves towards the $167.7 resistance level, which is the Fibo'38.20 slice. Since the general horizontal course in the market continues, we think it is beneficial to follow a buying strategy close to the supports and selling close to the resistances. 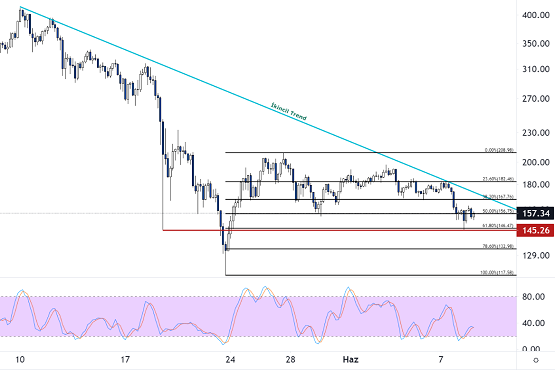 Chainlink is priced at $22.86 this morning, depreciating about 5 percent. When we check the institutional investor side for LINK, which we see that the positive news flow continues, such as new deals, we see that Grayscale has purchased 891 LINK in the last 24 hours. Grayscale, which has been in a sales trend recently, has added 23,234 LINK to its portfolio in the last 1 month. Institutional investors' interest in LINK continues.

When we consider the LINK/USDT parity technically, it is priced below the secondary descending trend that has existed since May 10. When LINK, which has had downward price movements as of June 3, is analyzed in the 4-hour period, we see that positive discrepancies have occurred in %R and stochastic with the decrease. We expect LINK to start an upward price movement, which found support at the level of $ 21.49, which was the Fibo'50.00 tranche, with these positive disagreements showing that the downward movement has lost momentum and investors are in the tendency to open trades in the direction of buying. The first target is the $26.59 level, which is the Fibo'38.20 tranche. 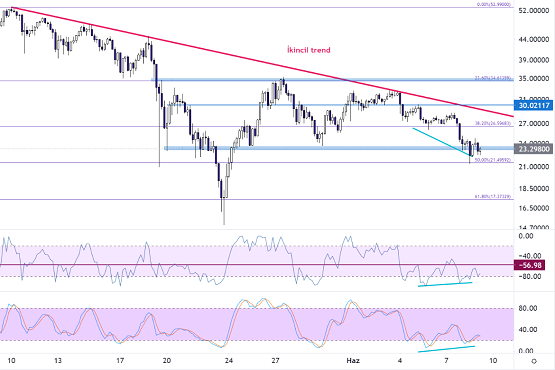 BAT is priced around $0.651, depreciating by about 3 percent this morning. When we consider the BAT/USDT parity technically, the price action that has been decreasing for the last 1 week is dominant. When we examine BAT, which found support at levels close to $ 0.60 after yesterday's sales, in a 4-hour period, it gives a stochastic buy signal returning from the oversold region. The RSI has also returned from the oversold zone but is trading below the resistance level. If this resistance level on the RSI is broken, we expect the upward movement to continue towards the descending trend at $0.73. 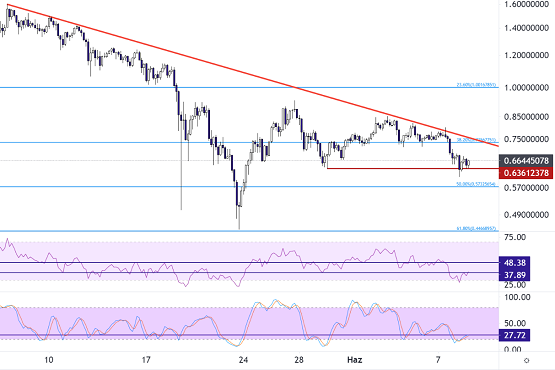