El Salvador is making history as the first independent government to use BTC as a legal tender, and behind the technology that helped strengthen this effort is a California-based cryptocurrency company.

Avalanche is among the fastest smart contract blockchain platforms. The goal of the integration with Wanchain is to bring its own ecosystem to the forefront as more people join the DeFi field.

Will Panama and India Accept Bitcoin?

Senior officials in both Panama and India say their governments should allow their citizens to pay for goods and services in Bitcoin.

Amount Liquidated in One Hour as Cryptocurrency Market Falls: $2.6 Billion

According to data provided by data collector Bybt, the outstanding $2.6 billion long positions (long) on major cryptocurrency exchanges were liquidated in just one hour.

El Salvador's government bought 400 Bitcoins on Monday and an additional 150 on Tuesday.

A report by British bank Standard Chartered shows that the company's analysts are optimistic about Ethereum. The bank's analysts think Bitcoin could reach $175,000 and said that "structurally, we are 'evaluating' Ethereum between $26,000 and $35,000.

Fast food chains such as McDonal's, Panda Express and Pizza Hut have begun accepting Bitcoin as a payment method in El Salvador.

Union Investment, the investment arm of the DZ banking group, is taking another small step towards providing crypto investment services to private investors. They will allocate a small percentage of their funds to Bitcoin.

Bitcoin, which lost about 0.60 percent in the morning, is priced at $46,426. El Salvador is making history as the first independent government to use BTC as a legal tender. With this news, which became official yesterday, El Salvador also made a total of 550 bitcoin purchases.

When we consider BTC/USDT technically, BTC, which experienced a retreat of about 20% from yesterday's low of $52,944 to the intraday low of $42,830 yesterday, closed at $46,894, a loss of about 11 percent as of the daily close. In technical terms, when RSI is examined in the daily period, there are falling peaks in RSI while the price is making new rising hills. This is an indication that the trend is losing strength, but yesterday's market-wide liquidation deepened the market retreat. As of the daily close, btc, priced above both the $46,000 level, which corresponds to its 200-day average, and the Fibo'50 tranche of $46,849, has a positive discrepancy in RSI in 1 hour and 4 hours. We do not expect sharp downward movements to continue unless they fall below the 200-day moving average. 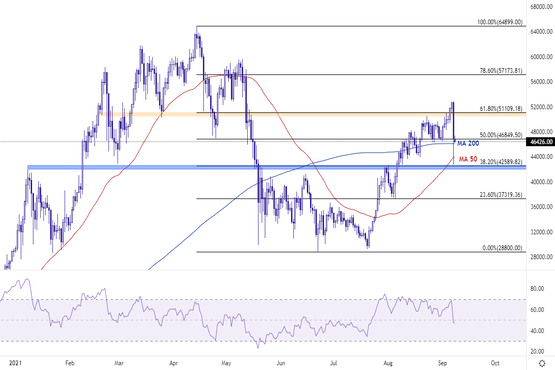 Ethereum, which has a horizontal price movement in the morning, is priced at $3435.33. Yesterday, a market-wide position worth $2.6 billion was liquidated within an hour, the largest one-off liquidation position among them was the ETH long position with $6.8 million. So with panic sales, the regression movement hardened and the ETH/USDT pair fell to $3005 yesterday.

When we consider the ETH/USDT parity in technical terms, ETH, which saw 5 days of horizontal, volumeless and compressed price movement, broke this jam yesterday downwards. When we look at the daily period, it appears that MACD is signaling a sell after yesterday's sharp decline. Although it made up about 23 percent of its intraday losses yesterday, it closed the day with a loss of about 12.5 percent above the support level of $3375, supported by the $3018 zone with a 50-day moving average. Although short-term metrics have recovered, the outlook remains negative in the daily period. Deeper withdrawals are not expected unless there is a daily close below the support level in the $3375-3290 band. 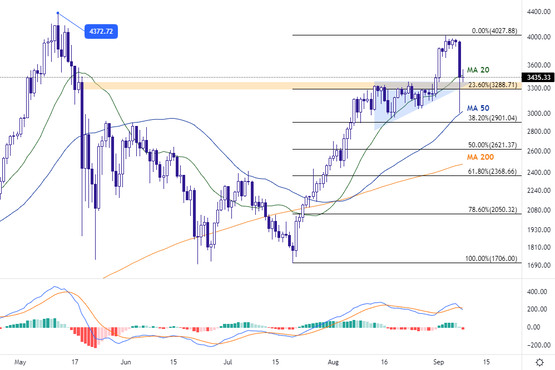 AVAX, which has a horizontal price movement in the morning, is priced at $38.05. AVAX, which did not remain silent on yesterday's declines when we examined the AVAX/USDT parity technically, closed yesterday at just below the $38.16 level that corresponds to Fibo'23.60, a loss of about 20 percent. MACD continues to sell in the daily period. If the $38.16 level on the AVAX breaks back upward and does not occur above the daily close, the $29.16, which corresponds to the existing rising trend and Fibo'38.20, is read as the next support level. 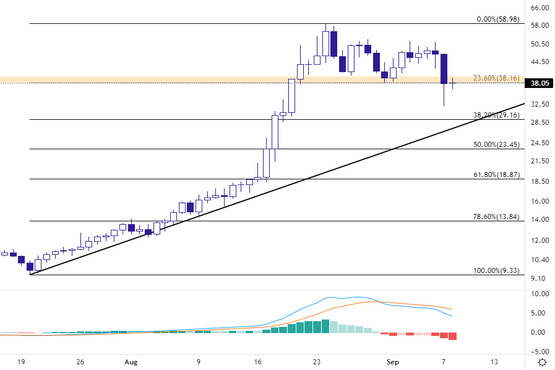 Ripple, which lost about 1.95 percent in the morning, is priced at $1.1116. When we consider the XRP/USDT pair technically, XRP started to retreat from $1.4151, and yesterday, with rapid market-wide declines, it fell to $0.9687, where it had a 50-day moving average, and found support from this level. XRP, which is recovering with it, closed above the $1.0715 level, which corresponds to Fibo'38.20. If it is held above this level, which is a significant support in XRP, we expect the sales pressure to decrease with it. 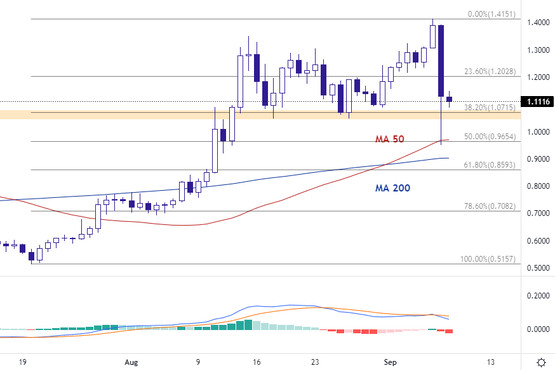 LTC, which gained about 2.50 percent in the morning, is priced at $185.2. When we consider the LTC/USDT parity technically, LTC broke the level of $207, which corresponds to the Fibo'50 tranche, with the support of its 50-day moving average, just above the level of $175.9, which corresponds to Fibo'38.20. We also think that this falling price movement, which we can consider to be the retesti of the jamming area, has ended as long as there is no daily close below $175.9. 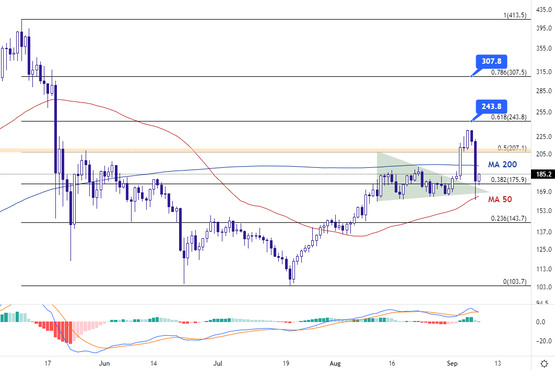 LINK, which lost about 0.55 percent in the morning, is priced at $28.22. If we examine LINK/USDT parity in technical terms, LINK, which experienced a deep retreat due to the sales realized with above-average trading volumes throughout the market yesterday and the positions liquidated with these sales, closed its daily close above the level of $27.98, which corresponds to its 200-day moving average. Although it is seen as holding on to this level in the morning, volumes are low. If the withdrawals continue and the 200-day below-average pricing repeats, there may be withdrawals again up to the 50-day moving average. 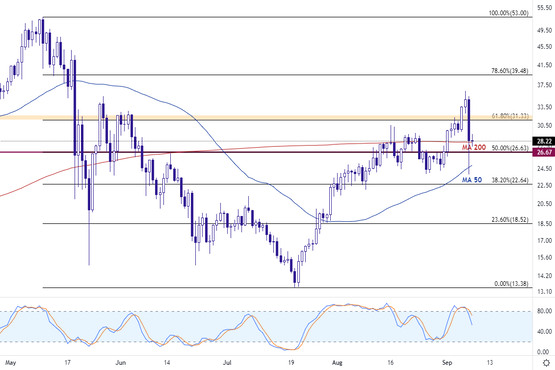 BAT, which lost about 0.30 percent in the morning, is priced at $0.776. BAT, which continued its price movement on the rising trend as of July 20th when we consider BAT/USDT parity in technical terms, broke this trend and its 200-day moving average down from $0.852 with above-average trading volume and closed below this level. When examined over a 4-hour period, it appears that the MACD continues to sell. For BAT, which has a low volume horizontal price movement just below the $0.794 level, which equates to Fibo'38.20, the pressure on sales is expected to wane if daily closes come in above this level. 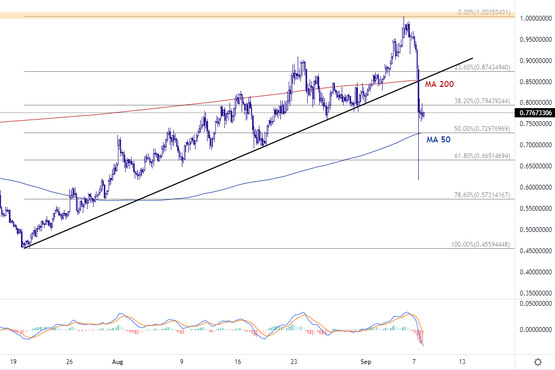