The first example of a fund transaction using the French Central Bank digital currency was successfully completed in France. As announced by the Central Bank, the piloting began on December 17, and 2 million euros ($ 2.4 million) of simulated shares purchased and sold by investors using CBDC were processed.

With $ 7.8 trillion, the world's largest asset manager, BlackRock plans to invest in Bitcoin for two funds under his management. The fund, which is 12 times the size of BTC's market volume, asked SEC for Bitcoin transactions.

Bank of America, the giant bank of the USA, published a survey attended by investment experts and commented on current trends in the market. According to the survey results, Bitcoin was the most popular investment choice. Survey respondents manage assets worth a total of $ 561 billion.

Grayscale bought an additional 8,762 Bitcoins worth $ 305 million today, bringing the total number of BTC assets to 641,520.

Ripple Releases Report on 2021 Expectations
In the report, which stated the predictions of the Ripple company, it was emphasized that developing countries started to turn to digital technologies, while North African and Middle Eastern countries came to the fore. In addition, it was stated that they have been in limbo for a long time due to uncertainties in the USA and for this reason, the USA lags behind many countries.

Accompanying the rhetoric that regulation could come in the cryptocurrency market yesterday, there was a decrease in the overall cryptocurrency market. Bitcoin fell as low as $ 33,400 yesterday, while recovering to levels of $ 35,700 in Asian hours. BTC traded at $ 34,600 this morning is 2% lower than yesterday. BlackRock, the world's largest fund with a $ 7.5 trillion fund, applied to the SEC to establish two Bitcoin funds. This news is very important for Bitcoin, the BlackRock news after Grayscale in Bitcoin, which was previously mobilized with the purchases of institutions, is very appetizing.

When we consider the BTC / USD technically, the 32,900 and 34,600 $ regions below are on the way to become a region where prices are supported rather than a consolidation zone. On the other hand, the descending peaks from $ 42,000 are noted, while the full side of the glass points to the lows recovering from $ 30,200. While horizontal oscillators show a recovery by bottoming in the 34.000 region, this region is also the Bollinger subband. In summary, while the $ 34K zone is the support area in Bitcoin, it is necessary to consider the potential reactions that may come from this area or a trend that may start. 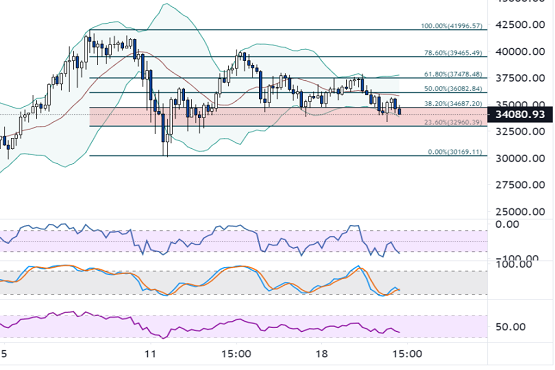 Ethereum fell as low as $ 1270, with profit sales and market-wide sales after breaking the $ 1440 record in the previous days. Since yesterday, whale accounts transfer flows have been drawing our attention to Ethereum. According to Glassnode data, the amount of Ethereum daily withdrawn from exchanges reached 900 million dollars. While this figure has been recorded as the biggest exit since 2018, we see that this data from $ 1270 gives a positive signal as a step analysis despite the negative technical picture.

When we consider ETH / USD technically; The uptrend channel that has been formed since January 11 was eliminated the previous day and prices fell behind this channel. If it is exceeded $ 1320, it will return to this channel. However, in addition to this, there is a declining trend formation, which also passes at $ 1340. Therefore, for Ethereum today, the $ 1320-1340 zone will be a difficult area to watch very closely. Although technically the outlook is somewhat weak, we see that it is in an effort to recover. 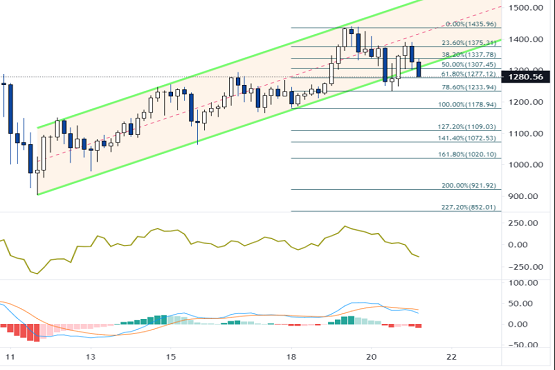 Avalanche's cryptocurrency AVAX is trading at $ 12.60, up 2% today, with a more positive outlook, after the previous day's pullbacks. Among the increasing volatility of crypto coins in 2021, AVAX movements became the currency that came to the fore. In this respect, we see that the Fann regions work well at the technical analysis level for Avalanche, which we find both attractive and very successful within the scope of the project. If prices remain stable for a period of $ 11.60 - $ 13.00, it may again bring levels of $ 13.00 and then $ 14.00. 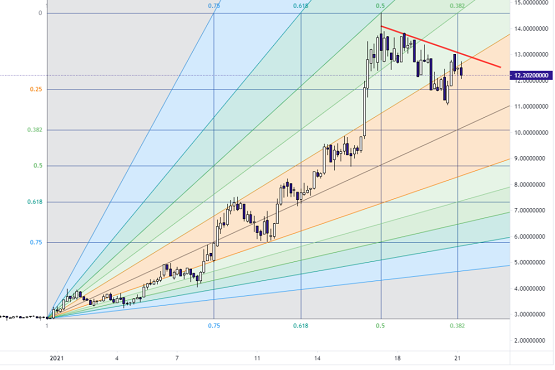 The XRP / USD pair is priced around $ 0.29 this morning with a small change of 0.1 percent as a percentage. Investor comments on the SEC case continue to come without slowing down. In an interview attended by gold investor Peter Schiff, who is known for his bitterness and cryptocurrency hostility, he clearly emphasized that XRP is a security, and it took place on almost all news platforms. Schiff also claimed securities for Bitcoin, although the SEC said that Bitcoin cannot be clearly classified as a security. While the comments from many regulators, statesmen or big company executives are no longer having a big impact on the market that is focused on the case day, separate voices from each head are blurring the waters.

When the XRP / USD parity is analyzed technically, it is seen that it shows a slow recovery on the minor uptrend that it started at the end of December 2020. Pricing above $ 0.30 can be considered a sagging zone and pricing above $ 0.30 and above may not materialize unless persistence is maintained above this level. In the parity, which continues its horizontal course, the macro part should also be followed carefully. 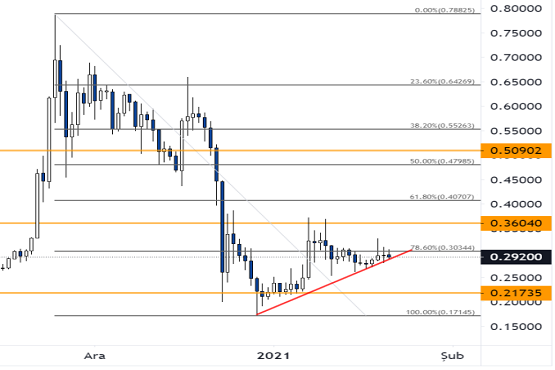 Litecoin is pricing down approximately 5% against the dollar this morning at $ 143. It is 20% away from the $ 185 level it tested on January 10. Looking at the monthly revenue spreads between BTC and LTC, compared to BTC's 46% increase, Litecoin falls behind Bitcoin with an increase of 25%. It is not known whether the correction movements in the prices in Bitcoin have negative reflection on LTC or whether the investor interest of Litecoin is decreasing. However, with the high correlation with BTC, we can witness pricing above $ 143 for Litecoin, which we often talk about being correlated with BTC, as the BTC prices become stable at $ 35,000 and above. On the other hand, if increasing institutional investor interest makes Bitcoin perform well, Litecoin will follow this increase.

When the LTC / USD parity is examined technically, we see that the horizontal channel, which was launched on January 11, broke up with the date of January 20, but then the price changed its direction and made a pullback. The 9% action zone between $ 139 and $ 152 could be the new action zone for BTC-led LTC, which is still calm for now. The upward break of the $ 169 level is required to accelerate the upwards. 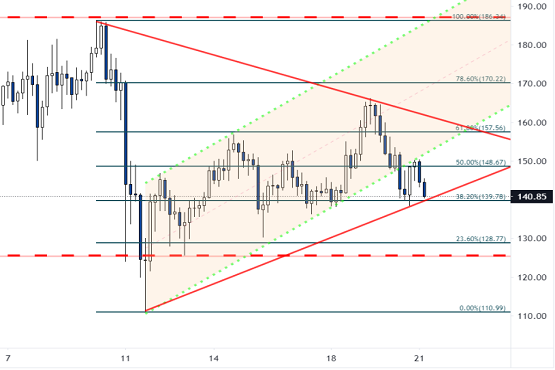 While Chainlink was priced at $ 21.00 yesterday, it dropped to $ 19.10 levels due to the selling pressure across the market. At this point, after the support and the recovery in crypto sales, it rose to the level of $ 22.00 and moved up 16% from the bottom.

When we consider the LINK / USD parity technically, even if there is an OBO appearance when looking at the peaks in the 22.00-23.00 regions, the $ 19.60 level must be broken in order for OBO to form. It should be noted that there is a risk of an upturn from here, since there is no confirmation in the direction of the break and the direction where OBO started. At the same time, as the general trend is bullish, the hold in the $ 20.00 region may be the beginning of a new bullish move. The view is horizontal. 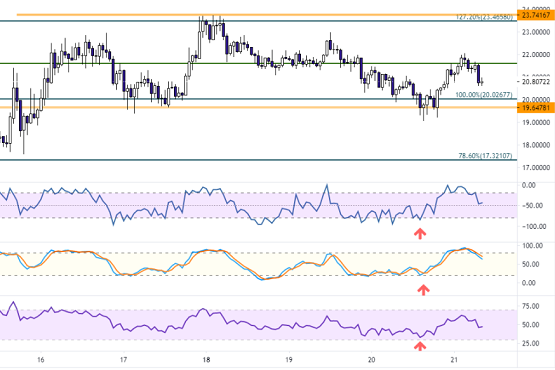 BAT / USD is trading at $ 0.27 this morning. In the parity, which continues its course in the middle upper band of the Beliş channel, the indicators show negative disagreement with the price. Although the MACD and Momentum oscillators have not recovered from the descending position yet, the BAT / USD parity is showing a steady increase with rising peaks and recovering lows. This conflict can end with a little backward movement. The $ 0.2530 level is in the support position. 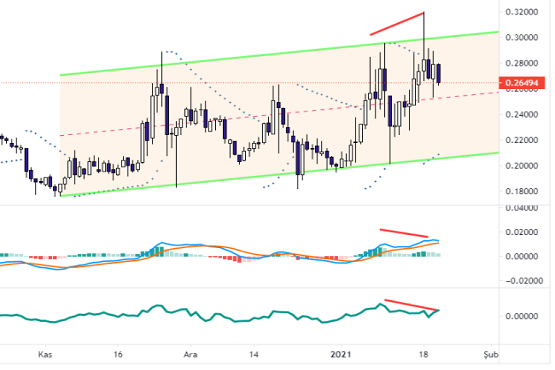