China will hold a third lottery to test its central bank digital currency (CBDC), giving away a total of over $6 million in digital yuan to 200,000 people for free.

Guggenheim's New Fund Will Have BTC

The Guggenheim Active Allocation Fund, created by Guggenheim Investments, may contain Bitcoin, according to a filing with the U.S. Securities and Exchange Commission on June 1.

According to data published on CoinGecko, Ethereum total transaction volumes exceeded Bitcoin transaction volume for 12 days in May. We see that the volume increased a lot in the period of sales and now the waters have calmed down a bit with the decreasing volume.

Bank of Thailand (BoT) has selected German technology company Giesecke+Devrient (G+D) for its central bank digital currency project, according to an acquisition announcement made on Sunday.

OSL, a digital asset platform affiliated with Standard Chartered Bank, said it is preparing to launch an institutional cryptocurrency brokerage and exchange for clients in the UK and Europe.

Warning to Countries Not Issuing CBDCs from the European Central Bank

Governments that fail to introduce central bank digital currencies (CBDCs) may face threats to their financial systems and monetary autonomy, the European Central Bank said in a report released on June 2.

Marathon Digital Holdings announced that it purchased 226.6 Bitcoins throughout May, and the company has a total of 5,518 Bitcoins in reserve.

Many Companies based abroad, including Turkey, are mining cryptocurrencies in Iran

In the statement made by the President of the Iran-China Chamber of Commerce, it was stated that companies based in Turkey, China, India and Poland established their headquarters in Iran for crypto currency mining due to the low electricity cost.

The White House announced that as part of the fight against ransomware, illegal crypto currency transactions will be analyzed more comprehensively.

Bitcoin is trading with a gain of 2 percent, with a buyer above the 38 thousand dollar level this morning. Indecision in metrics and investors affects BTC prices. Accordingly, including on-chain metrics, it does not give clean signals as a return or continuation rather than being cheap. For this reason, pricing is waiting for us in a way that is very dependent on the news effect. In addition, the Fed announced that it will remove corporate bonds, junk bonds, bond ETFs and junk bond ETFs it bought last year. The Fed said it would sell them outright. In this case, it means that the liquidity in the market will be withdrawn a little more and this money that goes directly to investment products will shrink. However, a high pricing has not been seen for now, as the Fed gave a guarantee that the market balance would not deteriorate.

When we consider the BTC/USDT parity technically, it started to cut the 7-day average 30-day DEMA average in the direction of buy, and this was the first signal after April. Although technically a double bottom seems possible, the neckline brought by 41 thousand must be broken for this. The lack of a sharp upward movement in terms of volume in BTC, which has not been able to exceed the 38 thousand resistance for the last few days, brings up the issue that it may be challenging to break the 38 and 42 thousand resistances. New money inflow and volume are closely followed. The outlook is in the direction of reaction from the bottoms. 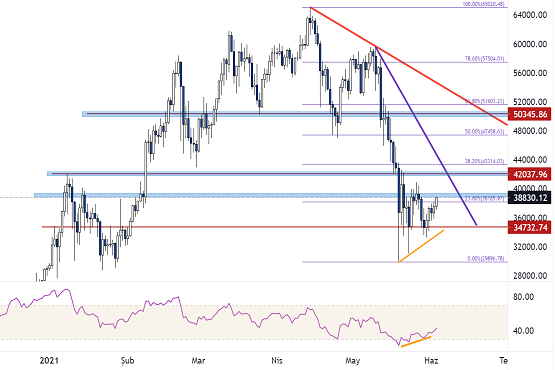 Ethereum continues the day positively with purchases close to 4% this morning. Although the global risk appetite is strong, we have not seen a clear exit from gold yet due to inflation fears. In the existing liquidity pool, money needs to come out of the bottom and enter risky asset classes. Premiums of Grayscale's ETH fund have increased. This may increase the interest of institutions in ETH, which differs from LTC premiums by having futures on CME. For this reason, we can say that it has become more open to corporate interest. According to the weekly report published by CoinShares, $46.8 million of the $74 million fund that entered the market by institutions last week belongs to Ethereum.

When we examine the ETH/USDT parity technically, there is an image similar to the double bottom formation. Therefore, while following the movements above, the $2900 level needs to be broken so that the neckline is crossed and ETH moves. The descending trend that has existed since the $ 4370 level has been broken and the upward trend that has existed since the $ 1730 level continues, and pricing continues. Although we have not yet seen an intersection in the 7 and 30-day DEMAs as in BTC, the course is moving in the direction of buying. Our view for ETH is positive. 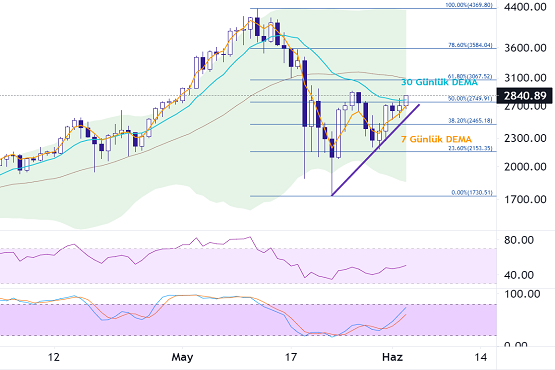 AVAX is priced at $17.70 this morning, gaining about 4 percent in value. When we examine the AVAX/USDT pair technically, AVAX, which broke the falling minor trend upwards from $ 16.50 in the past days, was moving horizontally above the support level at $ 17 with the breakout. As we stated in the bulletin yesterday, the $17 level acted as support and with the purchases from here, AVAX reached $19.5, which is our daily expectation of Fibo'23.60. AVAX, which formed a minor uptrend in the 4-hour period, also maintains its uptrend on the RSI. AVAX is holding above the support in the $18.5-19 band, if this support is maintained and a break above $19.5, the Fibo'23.60 tranche, we think price moves towards $24 will follow. 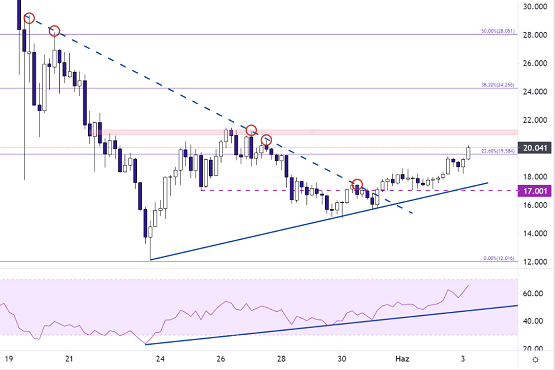 Rising by about 1.19 percent in the morning hours, XRP is priced at $1.03. In Ripple's case with the SEC, the SEC requested an additional 60 days from Judge Netburn to hear experts and detail the investigation into the case, which has lasted nearly 2.5 years. Although Judge Netburn has not decided on this issue yet, in the reply written by Ripple on this issue, it is implied that 2.5 years is enough time to do research, and that this request of the SEC is only an effort to stall the case because it did not get the information it wanted. This move by the SEC has been interpreted by investors and other lawyers in the case as a weak hand and making more accusations than it can handle. We see that Ripple is generally strong in the litigation process and we maintain our positive view for XRP.

When we examine the XRP/USDT parity technically, XRP, which started its upward movement with the buy signal given by the 7-day DEMA cutting the 14-day DEMA upwards on May 30, is priced just above the 1.033 level, which corresponds to the 30-day DEMA. We think that price movements will be seen towards the Fibo'100 level, which is located at the $1.20 level, as both the 30-day DEMA and XRP, which is in the $1.04-1.06 band, which is the key resistance zone, cuts this zone to the upside. On a daily basis, the Parabolic SAR supports XRP in the upstream direction. Considering the positive news, we read the outlook in XRP as positive. 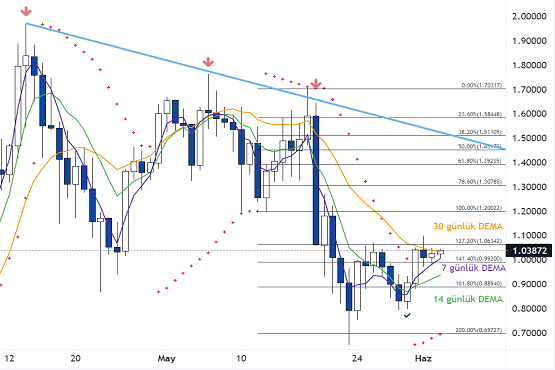 LTC has gained about 1 percent this morning and is priced at $189. We see that the fund performance of LTC, whose grayscale premium is 1789 percent, is better than the spot performance. Considering this metric, which is important for institutional investors, and the market chain metrics that we mentioned in the bulletin yesterday, we think that these prices for LTC are suitable for investors. Considering the chain data and fund performance, we read positive for LTC.

When we look at LTC/USDT technically, the secondary descending trend that has been tested on May 10, which is also a record level at $ 420, is still active. A break here also means that the $190 level, which coincides with the Fibo'38.2 slice, must be surpassed. If it can break this secondary trend and hold on, we think it will gain momentum in upward movements. At the same time, the neckline of LTC, which is a TOBO formation, is broken upwards. If the lack of volume in the market is eliminated and new money inflows occur, the price may move towards $250, including the TOBO target. We interpret the outlook positively in LTC, aiming at the Fibo'50 tranche at $220 as the first target. 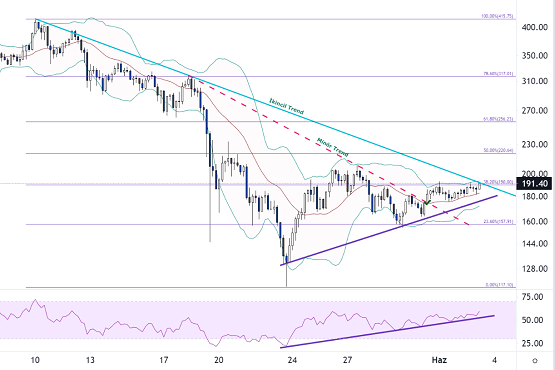 Rising 3 percent in the morning, LINK is priced at $31.59. When we examine the chain data, we see that new and balance accounts have been on the rise in recent days and that investors' interest in LINK continues. We have mentioned in detail in the previous bulletins that the interest in DeFi projects has increased and that the Chainlink project is among the projects with the most active developers. We maintain our positive view of LINK.

Technically speaking, the LINK/USDT pair is trading at $31.59 above the support level at $30.00. When we examine it in the 4-hour period, we see that it is trying to return to its rising trend, which has been continuing since May 23. The major downtrend in the $33.00-35.00 band since May 10 and the $34.45 levels at the Fibo'23.60 retracement level are important resistance levels and these levels can be expected to be broken for new purchases or 30.00 Short-term buy-sell can be made at the support level at the $ levels. 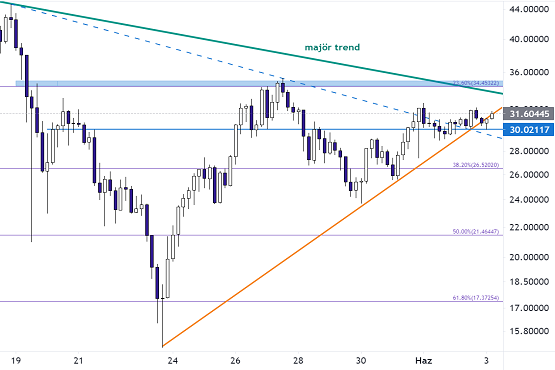 BAT is priced at $0.822 this morning, with an approximate 2.5 percent gain. Technically speaking, the BAT/USDT parity, which is about 49 percent below the peak level of $1.64, broke the major downtrend formed as of May 7. When examined in the 4-hour period, we see that the rising trend is dominant in the RSI and the stochastic gives a buy again signal. If the broken trend is maintained, we expect the first target Fibonacci retracement for BAT to rise towards the 23.60% tranche of $1. If trend protection cannot be achieved depending on the market conditions in the coming days, the Fibo'38.20 slice at $0.73 can be retested. 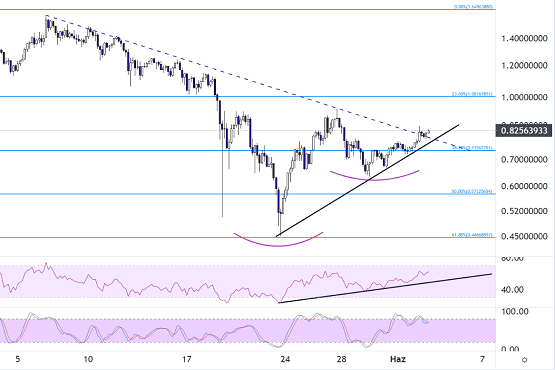