CitiGroup has announced its new group, called Digital Assets Group, which focuses on the cryptocurrency and blockchain space.

“There is a strong need for a legal framework and investor protection for cryptocurrencies to be a viable form of investment for consumers,” said the Norwegian Financial Supervisory Authority consumer coordinator. said.

The UK's financial regulator, the Financial Conduct Authority (FCA), has approved the activities of the fifth cryptocurrency company, while warning investors that 111 companies are offering crypto services in the country without proper registration.

Andreessen Horowitz (a16z), which manages $865 million and raises its total assets devoted to crypto (AUM) to over $3 billion, has announced a new $2.2 billion crypto fund.

Chainalysis, a blockchain data company, has raised an additional $100 million in investment, raising its total value to $4.2 billion.

New York Digital Investment Group (NYDIG) has announced that it has partnered with Q2 to provide access to Bitcoin for bank account holders in the US.

Having previously stated that El Salvador's legalization of Bitcoin is alarming, the IMF announced that talks with El Salvador are ongoing, sharing its macroeconomic and legal concerns. El Salvador, on the other hand, promotes its own country's BTC wallet and distributes $30 worth of BTC to its citizens using the wallet.

In Paraguay, a bill has been prepared to legalize Bitcoin and use it as a reserve.

Athena Bitcoin, the Bitcoin ATM operator, is preparing to install 1500 new ATMs in El Salvador, which has legalized Bitcoin.

Bitcoin is priced at $ 34,700 with horizontal price movement in the morning hours. With El Salvador's acceptance of Bitcoin, the focus was on the statements and actions to be taken from the states. According to a recent report, Paraguay has announced that it is preparing a bill to hold Bitcoin as a reserve. Although it is important how this bill will end, we interpret positively that other states consider Bitcoin as a reserve currency. When we examine the chain data, we see that 87 million dollars of BTC has been exited from exchanges in the last 24 hours. Although this amount is low, there has been $ 2.3 billion stablecoin transfer to exchanges in the last 24 hours. Considering the stablecoin reserves, which are already high in the stock markets, it is positive to keep ready reserves to be used in the direction of buying, with the return signals in the market.

Technically, when we examine the BTC/USDT parity in the four-hour period, the price continues to move within the horizontal channel that exists as of May 23. The downtrend and the monthly DEMA corresponding to the current from June 15th at $33,170 were broken to the upside yesterday and the upward movement towards the channel middle band continued. For BTC, which is currently above the $34,497 level, which is the Fibo'50.00 tranche, the MACD is holding the buy signal. We expect the channel middle band level ($35,700) to be retested as long as the Fibo doesn't drop below 50.00. 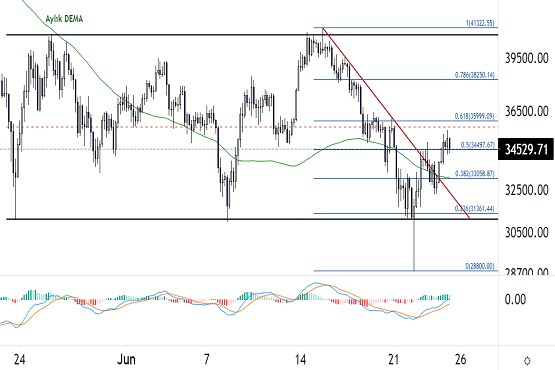 Ethereum, which fell by 1 percent in the morning hours, is priced at $1971. When we examine the chain data, the increase in the number of new and active addresses yesterday shows that the investor interest in Ethereum has started to increase gradually. The Ropsten and Rinkeby testnets made before the London hard fork and the fact that the system is running smoothly in the Ropsten fork can also be considered as a positive development for Ethereum.

When we look at the ETH/USDT parity technically, we see that the two-week DEMA holds on to the 1954 $ levels, which coincides with, and finds support at these levels. For ETH, which has risen to the levels of $ 2035-2040, but cannot sustain at these levels, the 1954 levels are the first support levels, and if it continues its upward movement from there, first the $ 2079 levels and then the $ 2117 levels corresponding to the monthly DEMA will be the resistance levels. The two-week DEMA ($1954 levels) and the weekly DEMA ($1916 levels) are support levels, respectively, and in the short term, buying near support and selling near resistance would be a healthier strategy. 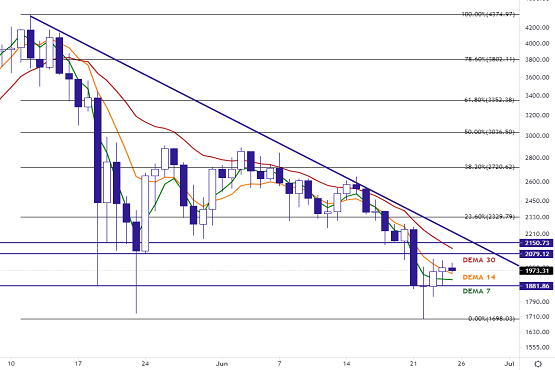 AVAX is priced at $11.20 with a decrease of approximately 2 percent in the morning hours. When we look at the AVAX/USDT pair technically, there is a short-term ascending triangle formation in AVAX, which is above the $10.67 support level. If the pattern is broken to the upside, price movement will be seen in the downtrend that exists as of May 20. If this support at $10.67 for AVAX on the support is lost, there may be a pullback to $9, which is the Fibo'61.80 tranche. However, the first target on the bullish side is the $12.50 levels corresponding to the downtrend. 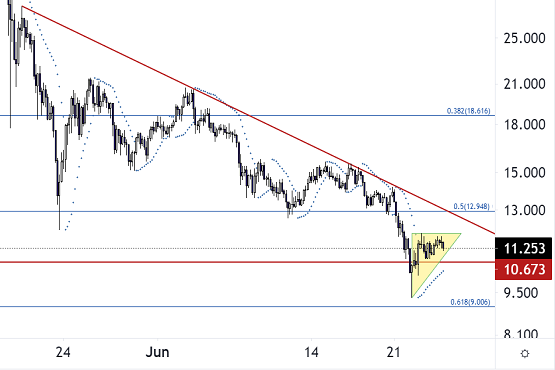 Ripple, which is 0.6 percent negative in the morning hours, is priced at $ 0.66. A letter is expected to be submitted to the case by the SEC on June 24, explaining why they asked the former SEC employee not to testify. First of all, it was learned that the person mentioned as a former SEC employee was Hinman, the director of the corporate finance department, which has an impact on determining the sources of funds and investment decisions of the SEC, and stated that it is not necessary to refer to Hinman's statement, stating that he did not have first-hand knowledge of XRP operations. In the case, it is not known whether the judge will justify the SEC in this matter or whether there will be another victory for Ripple, but this defense move of the SEC was considered as an "effort to buy time" by the people who commented on the case. As of June 25, we can say that Ripple has maintained a positive course.

When we consider the XRP/USDT parity technically, although it tested above the monthly DEMA's $0.68 levels, it could not maintain these levels, while firstly $0.68 and then $0.70-0.71 corresponding to the descending trend. There will be resistance. XRP, on the other hand, is priced above the weekly and biweekly DEMA. If the 7-day DEMA cuts to the upside while approaching the 14-day DEMA, we expect the price action to accelerate upwards. However, if a negative trend prevails in the market, $0.63 and $0.62 levels will be support, respectively. Buying near support and selling near resistance will be healthier until the market finds a direction. 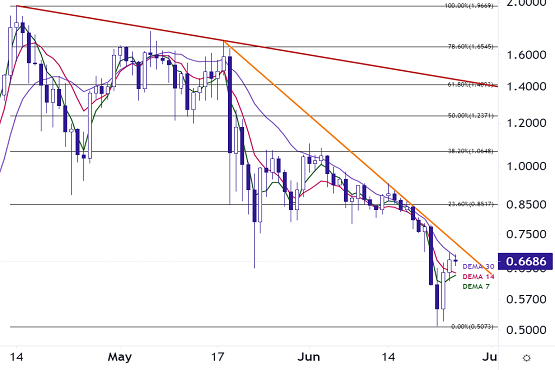 Litecoin, which moves sideways in the morning, is priced at $134. While 24 thousand LTC purchases were made by Grayscale yesterday, we see that the interest in Litecoin has started to increase, especially on the institutional side. Although the Litecoin MVRV-Z score, which we have covered in detail in our bulletins recently, is slowly approaching the 0 level, it still shows that it is quite discounted compared to the fair price of Litecoin.

When we look at the LTC/USDT pair technically, we see that it holds above the Bollinger middle band in the 4-hour period and continues its movement towards the resistance at the $139 levels. Breaking this resistance will be important, but it will be crucial if it can break the downtrend, which mainly coincides with the $144-145 levels. If these resistances cannot be broken, the Bollinger middle band, which comes first to $132, and then $129 will be support levels. In the short term, buying near support and selling near resistance will be more appropriate. 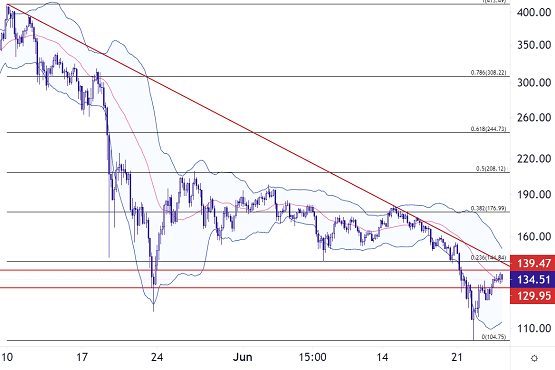 When we consider the LINK/USDT parity technically, we see that as of the morning hours, the weekly DEMA cuts the two-week DEMA upwards and creates a buy signal, and at the same time, LINK is priced at the monthly DEMA levels. Especially if the monthly DEMA can be sustained on a daily basis, the correct price movement can accelerate at the levels of $20.00-21.00, which coincides with the downward trend that has been continuing since May 10. However, if we see a pullback from these levels, the weekly DEMA at $18.05 will be our first support level. In this period, when the market is following a mixed course, we think that buying near support and selling near resistance will be healthier. 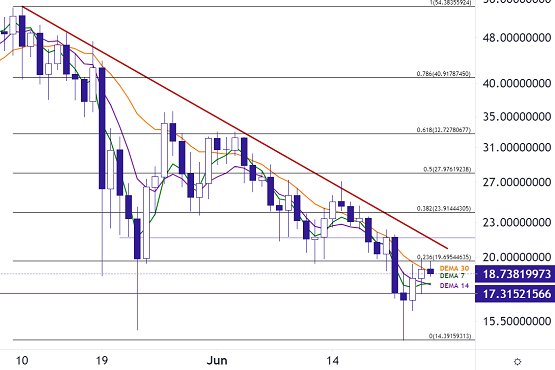 It is priced at $0.54, down 2 percent in the morning hours. When we examine the BAT/USDT parity technically, BAT, which retested the important resistance level at $ 0.539 yesterday, held above this level and continued the upward movement that came with it. BAT, which is priced under the descending trend that started at the peak level of May 27, continues its signal from the MACD in the 4-hour period. On pullbacks, we expect the $0.539 levels, which also coincide with the Bollinger middle band, to act as support zone. The next short-term target for BAT is read at $0.615, which coincides with the descending channel and the Fibo'23.60 level. 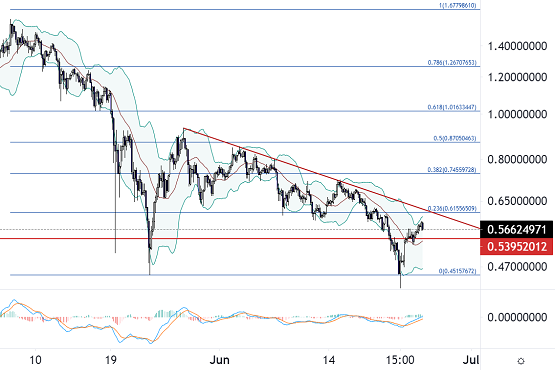