The Australian government has invested a total of AUD 5.6 million in two blockchain companies under the Blockchain grant scheme.

Within the scope of preventing and fighting tax evasion, the article, which includes the obligation to report the real beneficiary information of crypto money exchanges to the Revenue Administration, was published in the Official Gazette.

Capital International Group, a $2.3 trillion asset management firm based in Los Angeles, announced that it has acquired 12.2 percent of Bitcoin-focused MicroStrategy, according to the document submitted to the SEC.

A New Survey from Australia

A new survey reveals that 35% of Australians believe Bitcoin will eventually be traded more than fiat currency.

Grayscale has signed with BNY Mellon, the oldest bank in the US, to provide asset services for the BTC Trust.

Bitcoin, which lost 2.4 percent in the morning hours, is priced at $ 31,968. The fact that the inflation data announced by the USA yesterday was above the expectation increased the selling pressure in the crypto money markets, while a 1.56% depreciation occurred on the Bitcoin side in the 15-minute time frame when the data was announced, while the price managed to find support at $ 32,200. However, in the morning hours, the price continues its downward movement in the $31,968 band.

When we consider the BTC/USDT parity technically, we see that it opened daily above the $32,130 level, which corresponds to the monthly DEMA level, but was priced below this level as of the morning hours. In case of closings below the monthly DEMA level in the 4-hour period, the $31.400-31.600 band will be the closest support levels. Losing this support could increase selling pressure. Persistence above the $32,130 levels is critical in a possible recovery, and if it is sustained at these levels, we expect the price to move towards the $33,500-34,000 band. 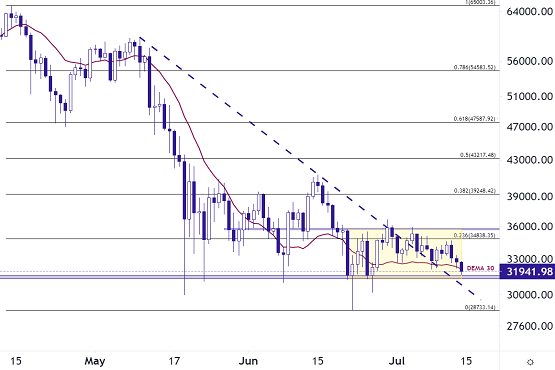 Ethereum, which lost value by about 2.7 percent in the morning hours, is priced at $ 1888. Looking at the on-chain data for Ethereum, the outlook is positive. Supply on exchanges has been declining for a long time. However, alongside this positive outlook, there are macroeconomic data that will affect all markets. Inflation data announced by the USA yesterday came much higher than expected. The increase in 10-year bond yields caused sales in almost all exchanges, including cryptocurrency exchanges.

When we analyze the ETH/USDT parity in technical terms, the market was suppressed in the expectation of the US inflation data that will come in the last 2 days. ETH, which continues its price action near the $ 2042.34 level, which is the important support level in the weekly period, moved in the downward direction with the release of the data. When we examine it in the 4-hour period, we see that the sell signal from the MACD continues. Priced close to the $1888 support, ETH could see a pullback towards the $1700 levels if it breaks this support to the downside. 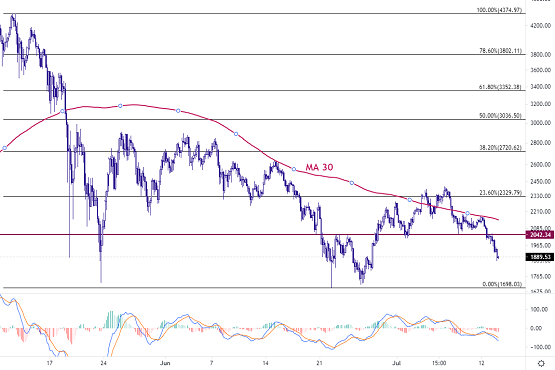 Losing around 4.4 percent in the morning hours, AVAX is priced at $11.37. When we consider the AVAX/USDT pair technically in the 4-hour period, the upward trend that existed as of June 22 was broken down from $12.2, with the higher-than-expected inflation data from the US yesterday. With the breakdown, AVAX, which found short-term support in the support area of ​​$ 11.7, lost this support level. As of July 7, we see that the price movement continues within the falling channel. Although the stochastic is in the oversold zone in the 4-hour period, there is no buy signal yet. Even if the middle band of the channel is held, if this level at $11.28 is lost to the downside, there may be a pullback towards the $10.2-10.4 region, which coincides with the channel lower band and the horizontal support level. 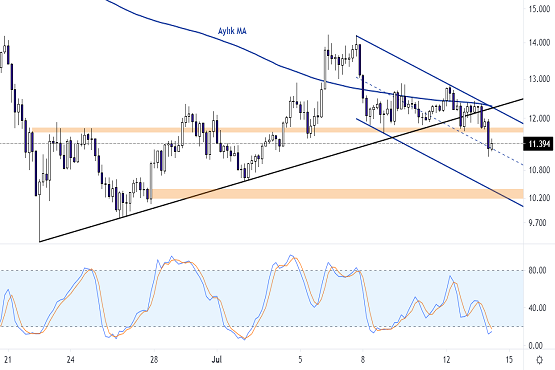 Ripple, which gained 1 percent in the morning hours, is priced at $ 0.599. There was new development in the case yesterday, and the court has scheduled a teleconference for July 15, 2021 to discuss the SEC's request for former employee William Hinman to have his testimony removed. While waiting for what will be discussed at the meeting and what will be the court's decision on expression, there was a retreat on the Ripple side with the sales in the market yesterday.

When we look at the XRP/USDT pair technically, the closest support level for XRP, which we see continuing its movement within the descending channel, is at $ 0.589. If these levels are not maintained, a pullback towards the $0.585 levels, which coincides with the channel lower band, may be possible. However, if the upward trend continues for Ripple, which gained 1 percent in the morning hours, the upside break of the resistance at $ 0.61 will be critical. In the short term, buying near support and selling near resistance may be a healthier strategy. 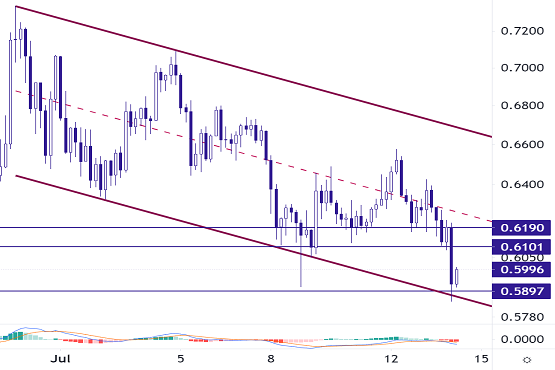 Litecoin, which lost approximately 4 percent in the morning hours, is priced at $126.20. When we consider the LTC/USDT parity technically in the 4-hour period, it is seen that the support level in the $ 131.5-133 band and the ascending minor trend that existed as of June 26 were broken down. For LTC, where the breakouts were realized with above-average volume, the downward movements continued up to $125, which is the Fibo'50 slice. For LTC, which we see that it has found support at this level, it is in the stochastic oversold region in the 4-hour period, but it has not yet given a buy signal. If persistence is provided under the Fibo'50 tranche, the levels we expect to find further support are read as $120 and $113, respectively. 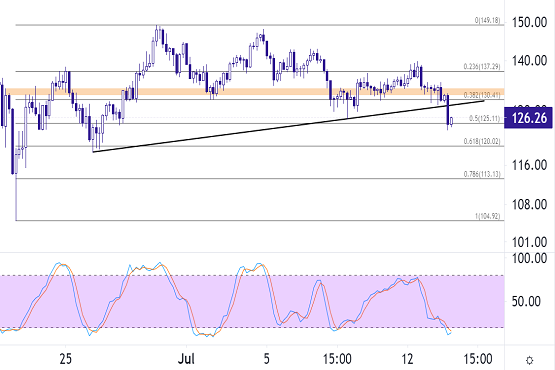 Losing 3.3 percent in the morning hours, LINK is priced at $16.32. When we consider the LINK/USDT parity technically, we see that it opens daily below the weekly DEMA level ($16.84) and is priced just above the $16.24 level, which corresponds to the monthly DEMA level, as of the morning. If the price action continues to the downside, it can test the $15.57 levels, which coincides with the downtrend from May 10, which was previously broken to the upside, and even pullbacks towards the $14.37 levels, which corresponds to the 100% tranche of Fibonacci. However, in case of an upside recovery, the upside break of $16.84 is critical and if it can be sustained above these levels, price movement towards $19.09 may begin. It may be useful to follow the support and resistance levels in the short term, as the market is mixed. 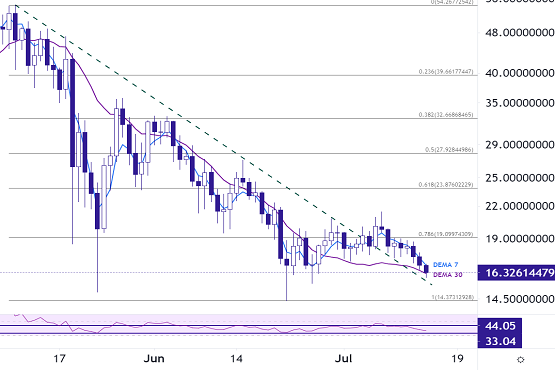 BAT, which lost about 5.8 percent in the morning hours, is priced at $ 0.504. When we examine the BAT/USDT parity technically in the daily period, BAT, which reacted at the level of $ 0.579, which corresponds to both the 30-day moving average and the Fibo'23.60 slice, started a downward price movement yesterday after the high inflation data from the USA. continues. In the daily period, the stochastic continues the sell signal that came on July 6. If there is a daily close below our horizontal support level of $0.509, the downward price movement may continue for a while. 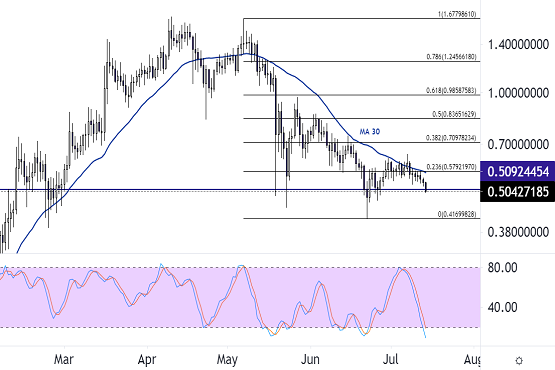