London-based crypto asset manager CoinShares has announced the launch of a new XRP trading product, XRP ETP. The XRPL will be listed on one of the world's largest exchanges, headquartered in Zurich, and will contain 40XRP per unit.

JPMorgan and Mastercard Invest in Ethereum

Ethereum-focused software company ConsenSys announced that it has received a total investment of $65 million from big companies and banks such as Mastercard, JPMorgan and UBS. The money collected will be used for work in decentralized finance.

EIB Will Use Blockchain for Bond Issuance

The European Investment Bank (EIB) has announced that it will use blockchain technology in digital bond issuance. According to Bloomberg statements, the EIB has reached agreements with global banks, including Goldman Sachs, to issue digital euro-denominated bonds.

Morgan Stanley: The CBDC Is Not a Threat to Cryptocurrencies

According to the latest report by Morgan Stanley analysts, the CBDC cannot threaten the cryptocurrency market. In the report it is stated that the decentralized assets have some features that make them attractive to investors and enthusiasts.

Ripple Labs CTO David Schwartz has stated in a recent post that those who own a life-changing amount of cryptocurrency should sell some to reduce their risk.

Bitcoin was trading at $64,400 this morning with a gain of over 1.5%, while on the other hand, the $64,800 level was the high of the day and all time. Details regarding the Bitcoin network update will take shape next month. Therefore, the Berlin hardfork in ETH may cause a similar action in BTC. As the Bitcoin price rises, we see that those who take short positions this time are liquidity. In such cases, the market may be afraid to sell and the selling pressure may decrease. In Bitcoin, MVRV, which is formed according to market value and adjusted value, shows that we are not more expensive yet, while the continuous increase in funding rates continues. Although Grayscale's BTC fund premiums have not recovered from negative yet, Canadian ETF's BTC assets continue to increase.

When we considered BTC/USD technically, we stated that we expect an increase of %5. The channel mid-band, which corresponds to $66,600, currently corresponds to the $69,000-70,000 range. 7 and 30-day DEMAs continue with the purchase signal they intersected and created the previous day. The outlook is positive 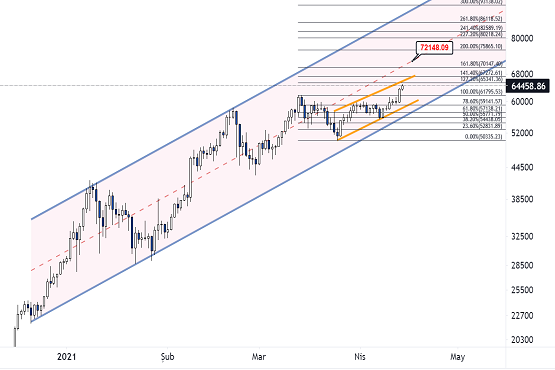 While testing above $2,400 on Ethereum this morning, we are tracking news and chain data-backed movements with new records. While they are the main supporters of the record or the rise, there is little hesitation in continuing the movement or participating in the movement. An important step in the Ethereum 2.0 transition, the Berlin hardfork will take place today. This situation, known as network reflection, will positively reflect on the ETH and ERC-20 network with improvements in network density and fees.

When we consider ETH/USD technically, the trend has become parabolic due to the continuation of the trend increasingly. If the $2,400 level, which corresponds to the Fibo'200 attack level, is broken on the rise, the above resistance zones will also become frequent. The $2,470 and $2,510 levels will wait as resistance. Currently, our horizontal zone is in the range of $2,300-2,400. 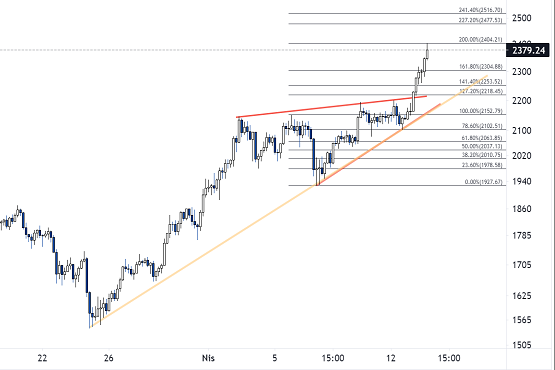 The AVAX/USD parity has risen 5% this morning to push its pricing above the $35.60 level. We see that AVAX, which enables fast and low-cost transfers in the DeFi market, which exceeds $50 billion, improves its services on the network. The return mechanism, which provides passive earnings on DeFi, continues to grow with the active role of Avalanche.

If the AVAX/USD parity is technically examined, after testing the $35.50 level, AVAX has returned to the $32.40 support and the response purchases above $32.40 brought the parity a 10% rise. The $36.60 zone, which is the middle band of the channel, maintains its 3% potential. For AVAX, whose closures above $36.60 will be followed, the channel middle band support may bring up again pricing in the Fibo'61.80 slice at $41.00. 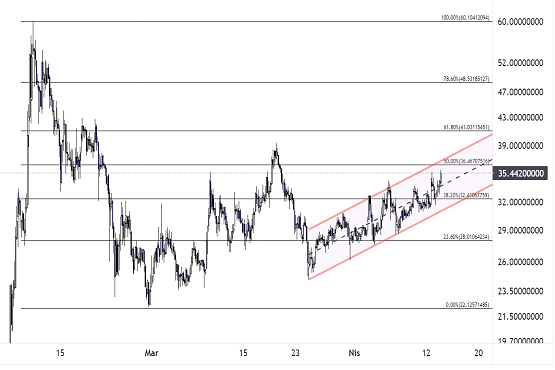 Ripple has surged 8% daily this morning, stepping into price levels of $1.94. CoinShares announced that it will launch its XRP ETP. ETPs are investment products in which XRP purchases and sales are more active. Thus, they support more exposure to XRP. The ETP in question will start to be listed on an exchange that has gained significant value in terms of market value. Ripple Labs announced that those who have critical investment in cryptocurrency can reduce the risks by taking some sales with a recent tweet with the CTO. This statement, which can be described as negative, did not prevent the XRP rally.

If the XRP/USD parity is examined technically, when the parity is analyzed in a weekly period, it has gained 200% in the 2-week term and 85% in the last week. With its record pricing of $3.34, the $2.00 resistance for XRP is psychologically strong. In the 4-hour period, there was a break of $1.70, which is the upper band of the channel, followed by a rise in response. Persistence above this level can be decisive. 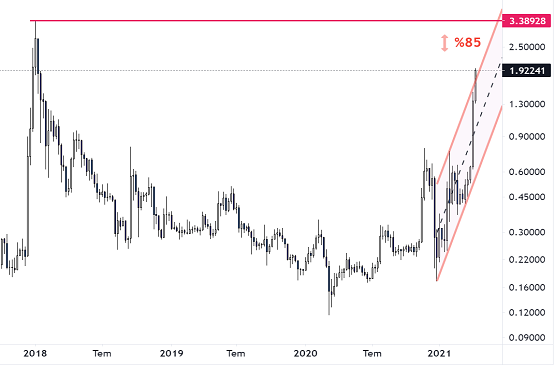 Litecoin is trading at $277, up 3.6%. The sectoral movement in cryptocurrencies also led to a 40% increase in LTC on a monthly basis. With the start of the movement of Bitcoin, we see that the movement in LTC will continue and a new movement effect is coming. The increase in the number of active and new addresses in LTC continues. The SOPR indicator was also supported by bullish chain data on LTC, crossing the threshold of the bearish/bullish line.

When we consider the LTC/USD technically, the bullish channel that has existed since December continues, while the upper band is above $300. In addition, the flag formation in the weekly period in LTC points to the $385 level. Weekly periods may find the medium term. As long as the movement of the sector supports this, time may be shortened. The outlook is positive. 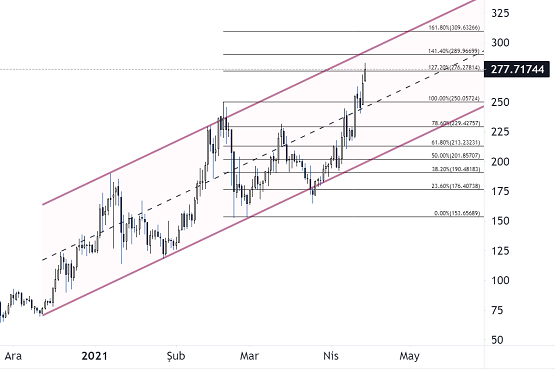 Chainlink is pricing in the $37.00 zone, up 4% this morning. The amount held by LINK in stock markets maintains its downward trend on a daily basis. The volume of exit from the stock markets exceeds the entry volume, indicating that investors tend to buy and accumulate rather than sell. We know that most of the LINK supply is targeted for long-term investments in large wallets, this situation, which is also supported by chain analysis, protects the parity against sharp price movements.

When the LINK/USD parity is examined technically, the parity shows that the Bollinger bands, which tend to tighten in the daily period, have started to open their wings. This points to price increases for the parity, which has left the consolidation phase behind. While the $36.90 price level, where the Fibonacci last correction is located, appears as the first resistance zone, this level may increase the buying appetite if it becomes support. The next level of resistance marks $41. Keeping pace with the general market-led bullish trend, LINK's looking positive and mid-term target of $60 continues. 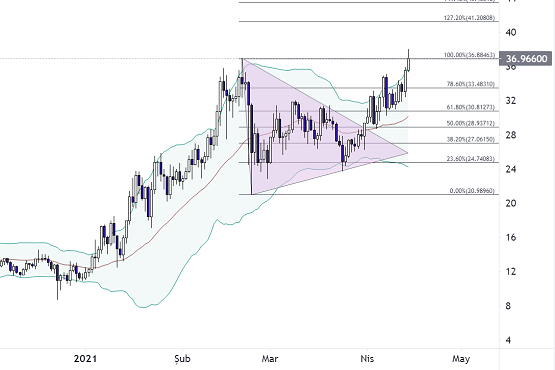 Basic Attention Token is priced at $1.52, up 1.8% this morning. When BAT's on-chain data is analyzed, the recent recovery move in the number of active and new accounts draws attention. On the other hand, the amount of Basic Attention Token held in exchanges is steadily decreasing, so we can infer that the demand on Brave browser, which is one of the most used platforms for the cold wallets, is supported.

When the BAT/USD parity is analyzed technically, it is seen that the closings made in the 3-hour period create a strong support and reaction zone in the $1.38 zone. With the break of the $1.46 level, the prices in the triangular zone were left behind, and the parity entered an upward trend. The initial resistance in the $1.55 Fibo'127.20 zone followed by the $1.62, $1.72 resistances could be where the parity is looking for support. The course is positive and continuous on the uptrend. 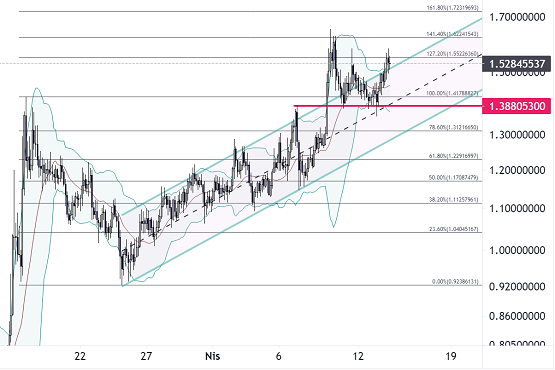