Europe's largest digital asset investment company CoinShare has launched its third physically backed ETP. Each unit of Litecoin ETP listed with the LITE symbol is backed by 0.2 LTC at launch, and investors are passively exposed to the Litecoin asset.

Polkadot Futures Set Records
The open interest rate of Polkadot futures has risen to $1 billion, surpassing Litecoin and XRP. KwikSwap, one of the decentralized exchanges, recently stated that it wants to use a second-layer solution to reduce Polkadot transaction costs.

Bloomberg Report Forecasts $80K for BTC
According to Bloomberg Senior Commodity Strategist Mike McGlone's April report, Bitcoin will exceed $60,000 in the second quarter of the year and hit $80,000. McGlone states that Bitcoin has a basic support at $50,000, and a new bull run will begin when the US ETFs are accepted.

Investors Pushes for a Solution to the GBTC Discount

Grayscale's GBTC shares have been trading at a discount since February. Investment Manager Marlton has stated that as an investor with a significant amount of GBTC shares, he has not benefited from the rise of Bitcoin since February as much as buying BTC directly.

South Korean Exchange Rejects Bitcoin ETF
A Korean cryptocurrency company had announced last week that they were working on an ETF plan. However, it has been stated in their latest announcement that the Bitcoin ETF has been rejected by the exchange. The fact that no ETF has yet been accepted in the USA is presented as the justification of the rejection.

RippleX's development team has been offering XRPL solutions for a long period. The team has published a new roadmap that will speed up the coding process in XRP Ledger. Thus, the inexperienced people using the application will encounter a simpler interface.

Although Bitcoin caused some fear after the $55,000 level was tested the previous day, it recovered and rose to the level of $57,000. The news regarding that Bitcoin ETF is rejected in South Korea as there is no Bitcoin ETF yet accepted in the US, and that Grayscale investors have started to complain about falling Bitcoin premiums, have supported some downward movements. However, it seems that the decrease in Bitcoin prices triggered the accounts with thousand and ten thousand BTC in particular and the amount of BTC in their wallets increased. Bitcoins from stock exchanges are still in negative values. According to Crypto Quant data, miners are still accumulating BTC.

When the BTC/USD parity is technically analyzed, while the latest volume data shows that the decrease experienced is not voluminous, there was a liquidity of $1.64 billion. The short TOBO in the hourly period points to $57,700. The fact that today's closing is again at 57 thousand will be important in order not to form a double peak formation. For now, we are seeing BTC pricing holding support and holding on to the medium-term bullish channel. This recovery in the Asian candle once again confirmed its $55,000 hold. 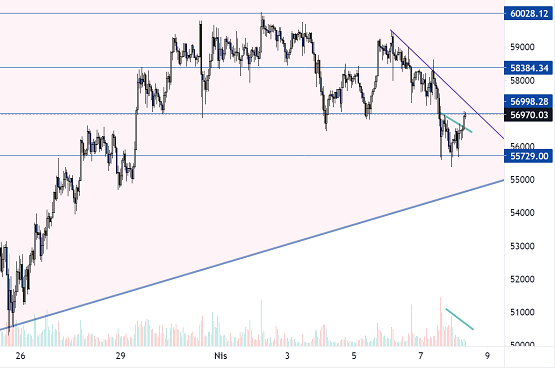 Ethereum is trading at $2,020 this morning with purchases close to 3%. It was tested with selling pressure at $1,920 levels, well below our correction expectation to $2,040. The money locked in the world of smart contracts and dApps and DFi created on Ethereum fell to $49.5 billion, with an exit of close to $2 billion the previous day. Ethereum has returned most of its premium, after breaking a new record with an output close to 20% over the past week. It is worth noting that it is not in a situation that seems discounted in the current scissors analysis.

When the ETH/USD parity is technically analyzed, after the break of the minor uptrend, the Fibo'38.2 correction level, which corresponds to the $2,015 level, has not been broken up yet. If it fails to break up, it may show a downward swing movement, so it can be rejected by not returning to an upward trend. Secondly, as the double bottom movement will continue, the $1,880 level may enter the pot in the continuation of the sales. Therefore, the $2,015 and $2,040 levels will be the major resistances of today. The outlook is trying to recover, as the negative mismatch breaks down, the MACD and momentum are also struggling to recover. 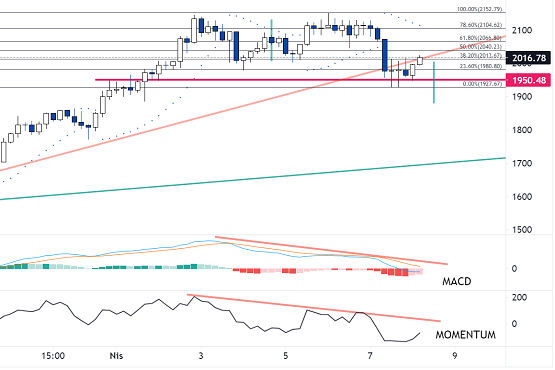 The AVAX/USD parity is pricing at $30.85, up 4% this morning. The parity continues its course in the middle-lower zone of the bullish channel which started on February 28th. In order for the purchases to accelerate, the parity must bring candlestick closings above the $35.00 channel mid-band level, which was also under pressure in the previous test. Thus, a more positive course can be created in the upper zone of the channel, although the course is positive for now, there is an upward movement close to the horizontal and under pressure. $28.50 level is channel sub-band and strong support zone. The parity is 48% away from the record. For this reason, we can say that pricing, which has been in the idle period for a while, is more likely to diverge from the market when it gains an upward momentum. 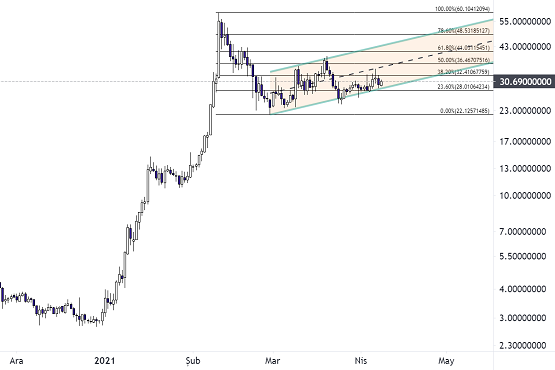 The XRP/USD parity is priced at $0.92 this morning, up 1%. Following Ripple's success at the trial, Ripple CTOs continued to support Ripple in their statements. Currently, the court process is also evolving in favor of Ripple, eliminating the fear that price pulls in short-term investments may be permanent. On the other hand, a simpler interface was created with an application developed in XRP Ledger. Thus, inexperienced users will not have to deal with unnecessary details.

When the XRP/USD parity is technically analyzed, when the parity is examined in a 4-hour period, it is seen that the last candlesticks are made with long wicks but short bodies. This situation, which indicates the indecision between buyers and sellers, also creates a triangular appearance. The upside break of $0.94 could mean the bulls prevail in the parity and we could witness a rise to the $1.15 zone. The downside break of $0.90 may create selling pressure that will pave the way for a hard retracement to $0.70. For this reason, we are following the candlestick closes at $0.92 and its surroundings. 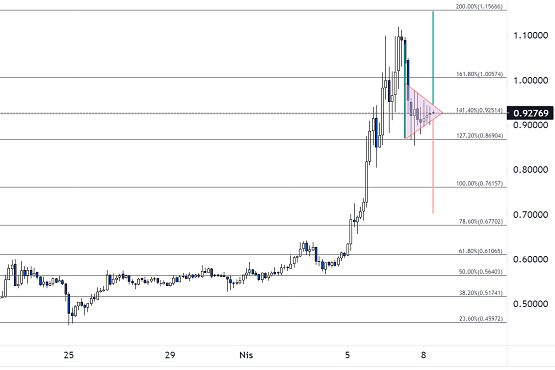 Litecoin is trading at $226 this morning, up 3.2%. Litecoin, which fell to the support of $210 after heavy sales in the US hours, returned its weekly earnings. Still, LTC is 13 points higher than BTC and is among the coins that appear strong in the chart. As we mentioned yesterday, Litecoin on chain data is strong. The increase in the number of recipient addresses, active and new accounts supports LTC.

When the LTC/USD parity is technically analyzed, the range of $211 where it broke its descending trend and the $209 range where the new minor uptrend passed is in support. Even though the movements that continue at the current level see resistance at $245, the uptrend continues and we are close to the support. Therefore, intermediate supports of $211 and $216 can be supported by an on-trend trading strategy. 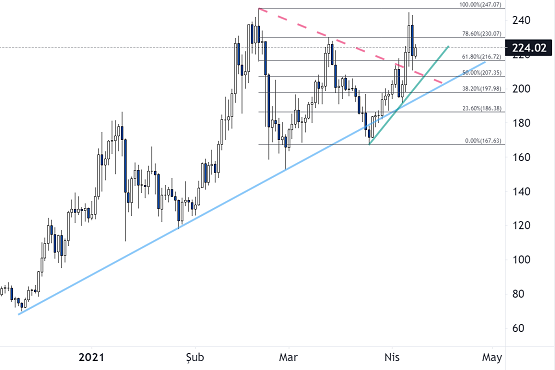 LINK is making up some of the previous day's losses, rising by 3.8% this morning. Chainlink is one of the top 10 cryptocurrencies with a market cap of over $13 million. The new path created for the institutional investments after the LINK has been added to GDLC by Grayscale, cannot be ignored. However, the GDLC Fund is not open every period of the year and is currently closed. It can be predicted that Chainlink, which is one of the 6 products in the fund, can strengthen the buyer side by capitalizing the re-purchases of the fund. 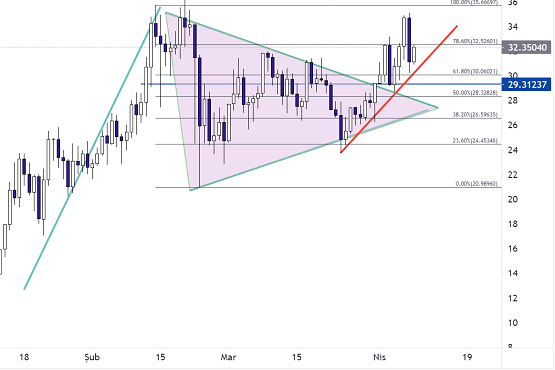 Basic Attention Token is priced at $1.25, up 5% this morning. Even though the parity tested the $1.40 level, it could not bring closures on the upper band of the channel and could not maintain its permanence here. Subsequently, it corrected close to 15%, giving a strong response from the $1.18 zone, which is the sub-band of the channel. If the prices in the middle-lower zone of the bullish channel move to the upper zone by exceeding the $1.28 channel mid-band, it may accelerate the purchases, which means a move of about 4%. Then the first target will be $1.38. The MACD shows that the sales volume is decreasing in the 4-hour period in the recovery phase. 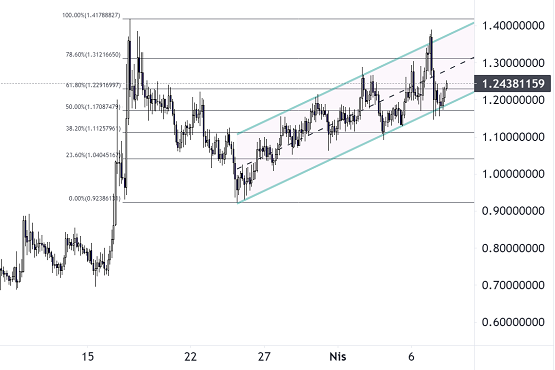