When the Bitcoin side purchases of institutional interest are analyzed, it is seen that three companies from the USA and one company from China have bought all Bitcoins mined in the past six months. These four companies were MicroStrategy, Tesla, Square and Meitu.

New Letter from Ripple to the Court

Visa Can Be Integrated With Bitcoin Wallets

According to the information shared by Bloqport, the CEO of payments giant Visa announced that they are working on their payment system to be integrated with Bitcoin and make BTC payments. When the integration occurs, Bitcoin will be accepted as a payment method in more than 70 million places.

Velo Merges with Interstellar
Blockchain-based financial protocol Velo Labs, which provides digital loans to companies, announced that it has acquired Interstellar. According to the company's statement, the main goal is to create and develop a Stellar (XLM) based payment network.

Stimulus Payments Will Be Made Next Week

According to the latest statements made by the US elected President Joe Biden, the distribution of 100 million dollars will start and end in the next ten days.

10% of US Citizens Can Invest In Cryptocurrencies
Japanese investment banking and securities company Mizuho Securities surveyed recipients of $1,400 stimulus checks. According to the survey results, US citizens will invest 10% of the aid they will receive in Bitcoin and other cryptocurrencies. This amount corresponds to approximately 24 billion dollars.

South Korea Will Request Reporting Of All Transactions
South Korea's cryptocurrency regulatory area is introducing a reporting law for crypto businesses in the country. According to the regulation expected to take effect on March 25, the exchanges, asset managers, wallet providers and custody platforms will file all their transactions.

Minister of Treasury and Finance Speaks About Cryptocurrencies

Minister of Treasury and Finance Lütfi Elvan announced that they have appointed a deputy minister to examine the cryptocurrency transactions in Turkey. Elvan added that Turkey has also concerns about cryptocurrencies as the rest of the world.

Japan Starts CBDC Tests
The President of the Bank of Japan argued that states should be prepared to issue their own digital currencies. Although the bank states that it has not yet considered issuing digital money, CBDC tests are expected in April.

Bitcoin is trading at $56,000 mid-week with 1.6% sellers. The support point formed in the $55,000 zone combined with positive news and the basic outlook helped the technical outlook. The impact of the aid checks started to be distributed in the USA is expected to be seen in the cryptocurrency markets; on the other hand, we expect a positive price effect with the statements of the CEO of Viso saying that cryptocurrency, especially Bitcoin, will also be used in daily expenses after the integration between them and fiat money. After the Asian session with the seller, we can see a strengthening in BTC again. The projection to be published at the Fed's regular meeting today will be important, as the projection that will answer questions such as the inflation outlook and expectations and "when is the first rate hike expected to come" will also affect crypto currency pricing.

When BTC/USD is technically analyzed, it is seen that withdrawals are limited in the $55,000 zone and are starting to react. The reaction that came before the weekly and monthly averages started to cut each other in the direction of selling was also meaningful in this direction. As long as the movements do not fall behind $54,800-55,000, the upward potential continues, and we are in the horizontal band of $55,000-58,000. The line continues with the minor descending trend that has passed over $58,000. 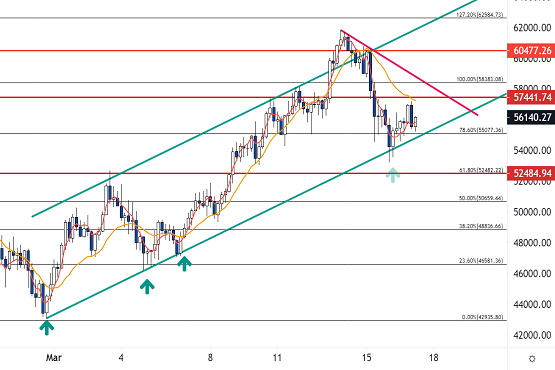 Ethereum is trading at around $1,780 levels this morning with about 1.5% sellers. Network charges are starting to rise again. Despite the EIP 1559 update, which was expected to come to remedy this, the investors abstained despite the 51-hour protests of the miners to the network on April 1, and this situation had a negative impact on Ethereum prices. However, in the case that occurred, Ethereum remained discounted on returns. In the first week of April, current scaling and speed issues in the network are expected to be addressed with Berlin and Optimism improvements. In this scenario, we find the current levels of ETH prices forward discounted.

When ETH/USD is technically analyzed, ETH is trying to recover in the $1,750 zone and traded below the minor downtrend past the $1,800 level, although the MACD has begun to confirm the lows, we cannot get a strong signal. Therefore, it is useful to go with the stop loss strategy. If it breaks the $1,830 level in its rise and continues, it will return to the old bullish channel and purchases will accelerate. For now, we see a horizontal but optimistic picture formation in forward-looking holding in this image. If the $1830 is broken, purchases may accelerate. 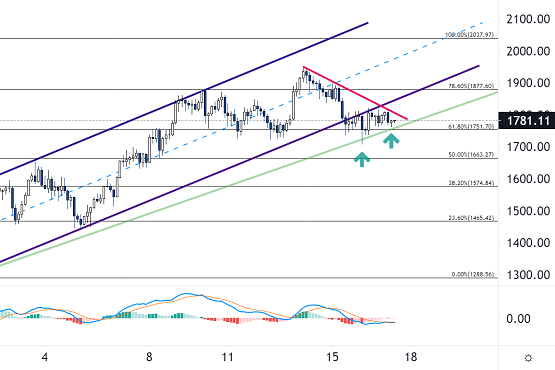 The AVAX/USD parity is trading at $32.50, with a 1.5% retracement this morning. The announcement that SushiSwap, one of the most adopted DeFi platforms by users, will be supported on Avalanche platform was an important development for AVAX investors. Later, another DeFi platform, which showed an accelerated rise even though its own token was newly listed, is also available on the Avalanche network. Both the low costs and the rapid execution of transactions can continue to support the growth on the AVAX side together with decentralized finance. On the other hand, the fact that company executives and developers carry out their work urgently and share them, including on social media platforms, increases the potential of AVAX, which has remained discounted despite strong collaborations and projects.

When the the AVAX/USD parity technically analyzed, the parity is separated from the reaction zone between $22.00 and $25.00. The consolidation period, which extends to the level of $31.00, including this zone, is now wanted to be left behind. There are three candlesticks above $31.00 and voluminous spikes above this resistance level will signal a resistance of $35.00. At this point, the double bottom formation will be revealed.  The formation target extends to the $47.00 zone. When the pattern confirmation above $35.00 is received, we can witness the gains accelerate. 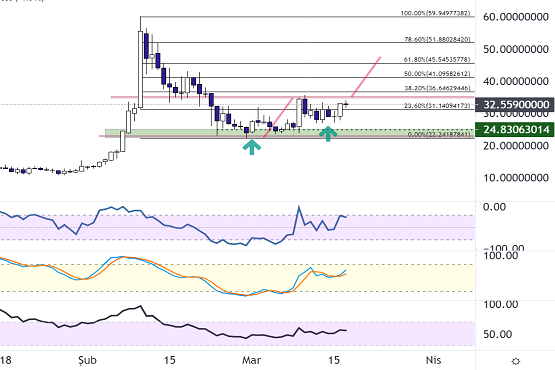 Ripple is listed in the $0.46 zone, up 1.6% this morning.  The contentious and critical state of Ripple's lawsuit with the SEC continues. Ethereum and Bitcoin were used as examples in the last document sent by Ripple to the New York court. Ripple is asking the SEC for a similar report this time after these two leading cryptocurrencies, which have been confirmed by the SEC that they are not securities, were claimed and requested a document about the differences of XRP. According to the request from Ripple, the SEC should prepare and submit the documents for BTC and ETH from the same report it prepared for XRP.  It turns out that things are heating up on Ripple's side and there is pressure built on the SEC.  At the same time, Ripple, struggling to quickly terminate the litigation process, seems to include all of its weapons in the game.

When the XRP/USD parity is technically analyzed, it is seen that the pair is hovering between $0.44 and $0.49 in the upper middle zone of the horizontal channel. Although XRP could not find support in this zone after its 20% increase on March 16, it returned to the channel boundaries, but the fact that it is priced in the upper zone of the channel is a factor that will support the course with buyers. In the 3-hour period, the %R and RSI oscillators are giving signals that are unstable but closer to positive. Stochastik is in a bullish position. Initial resistance for the parity will be at the $0.49 level. 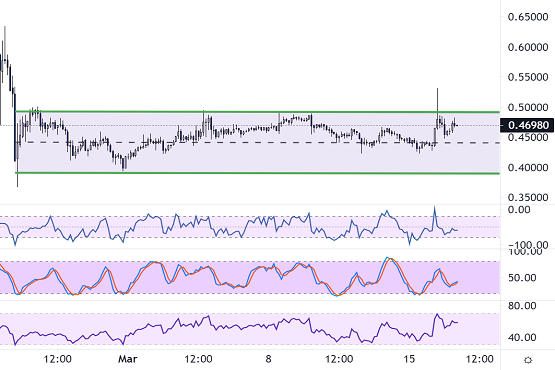 Litecoin is pricing at $202 this morning, a near-flat 0.6% increase. On March 15, it was announced that the codes for the MimbleWimble update will be completed. Details of the update will be followed. Litecoin will add MimbleWimble as an extension, and as the work on it becomes clear, the purchasing volume may get stronger. On the other hand, while many coins, which are in the top 10 in terms of market value in monthly returns, have gone up, Litecoin is still 2% behind. Its yield scissors with Bitcoin, with a monthly return of 16.5%, have also increased to 19 points.  For this reason, its request to close the gap quickly may have positively effect on the performance of Litecoin.

If the LTC/USD parity is technically analyzed, the formation target has been completed as the Shoulder Head and Shoulder formation formed in a 2-hour period broke the $204 neckline downwards and tested the $190 zone. Under the $204 resistance in the Fibo'23.60 slice, a triangle compression has occurred. Although it is not known in what direction this compression is, we can say that it gives an accelerated motion signal. On the other hand, when the MACD and momentum indicators are analyzed in order to predict the direction of movement, it is seen that the MACD has entered the recovery phase with maturity lines and the bars are rising in the positive zone. Momentum is also holding on to the upward trend with the rising bottom levels and getting support. The $204 break and above candlestick closes could bring the $231 initial resistance zone into the agenda. Closing the yield scissors with BTC also points to $246 resistance with an increase of about 20%. 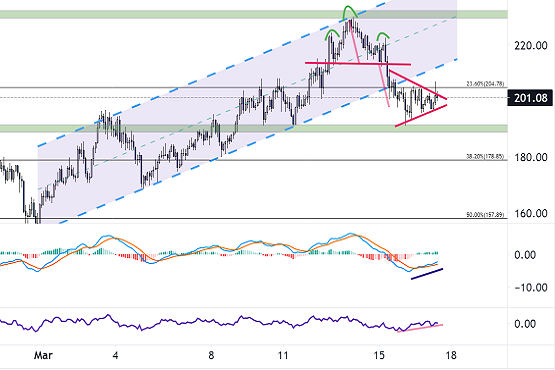 Chainlink published a blog last year about dynamic NFT printing strategies. Some important details about NFTs are foreseen in the report, which we examined in detail.  According to Chainlink researchers, the next step in NFTs will be the transition to dynamic NFTs. Communicating and reacting with the systems included here will be possible by constantly switching to smart contracts using oracles (bridges). This can create a bullish opportunity for Chainlink.

The LINK/USD parity is priced in the $28.00 zone, with an increase of 0.6% on a daily basis. The pair broke off from the bullish position and formed a weaker course, as it dropped below the lower channel's $27.80 zone on March 15 after the bullish channel it formed since February 23.  Above the $27.00 level in the Fibo 38.20 slice, there are 4-hour candlestick closings of the last two days. The responses of the pair at this level can ensure that it is within the boundaries of the channel again, so that positive movements may be in question.  Initial resistance is $29.00 and then $30.80. 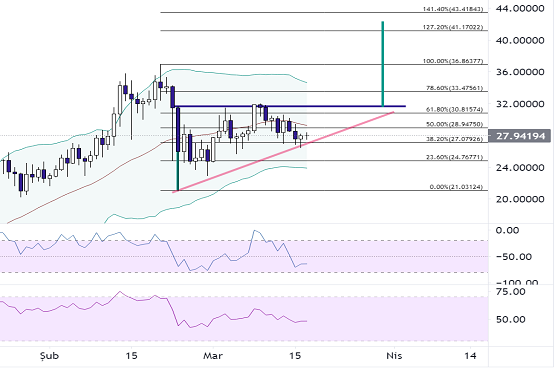 The Basic Attention Token climbed above $1.00 and tested $1.20, reaching its target on the mathematically calculated maturity according to the volatility calculation. This zone was also the flag formation target for the parity and the formation was thus completed. The parity has reached up to 60% increase in the 24 hour period. In the morning, it is priced around $1.00, showing some correction. It will be healthy to follow the support levels for pullbacks after the accelerated rise of the pair. On the other hand, 7 and 30-day double accelerated moving averages show the levels of $0.96 and $0.85 as the areas where the parity will receive support for pullbacks. 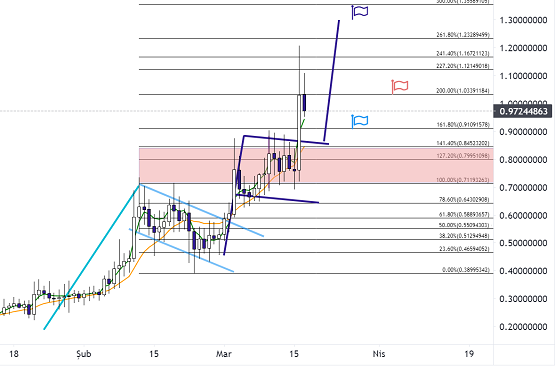