The Guggenheim Funds Trust announced that it will invest in Bitcoin through Grayscale. It reported to the SEC that it could invest 10% of its total managed assets of $ 5.3 billion, or almost $ 500 million. The increasing interest of corporate companies in cryptocurrencies can cause a demand explosion. Positive effects can be seen in terms of prices.

Cryptocurrency Payment System Spreads In Venezuela
Pizza Hut, one of the oldest pizza chains in the country, started accepting Bitcoin and other digital currencies as payments this week. Pizza Hut's move was made possible by a partnership with the Latin American crypto payment processor Crypto Buyer. Other stores participating in the country's crypto craze include Burger King, Intercontinental and Tamanaco Hotel chains, Venezuelan gas stations that accept payments in Petro, the Excelsior Gama supermarket chain, and Farmarato pharmacies.

XRP; Spark Token Distribution Shortly Left
While Ripple announced that Airdrop will support Spark Token many exchanges, Coinbase and Kraken reported that they will not. Less than two weeks before Ripple's smart contract tool, the Flare Network, airdrops, Kraken shared that they do not have to give credit to airdrops that have occurred in the past or will occur in the future. Demand for Ripple has also increased with the announcement of the airdrop of Spark tokens and the emergence that they can be traded 1: 1 for XRP.

UAE and Saudi Arabian Central Banks Publish CBDC Report
The UAE and Saudi Arabian Central Banks were informed about their joint central bank digital currency (CBDC) project on November 29 from blockchain technology, including the complexity of privacy and decentralization, as well as requirements to reduce economic risks such as visibility and traceability of the central bank's money supply. published a detailed report.

Ethereum Node Number Approaches Bitcoin
Ethereum nodes are currently up 11,161 from just under 9,000 a month ago. This increase pushed Ethereum into a head-to-head race against Bitcoin's 11,360 nodes. The rise in nodes coincides with the intense anticipation surrounding Ethereum 2.0, scheduled for release on December 1. Node increase corresponds to the increase in demand in cryptocurrencies.

Bitcoin Analysis - Bitcoin and other altcoins started the new month fast, making a mark in November. Bitcoin reached an all-time high of $ 19,870. Moreover, this time it made an upward movement outside of the balloon rhetoric. There was a decrease in the introduction of stablecoins over the weekend. Yesterday, in the statement made by the Grayscale fund, we experienced a news-based rise, which has a strong basis, with corporations saying that they are turning to bitcoin in the rotation change. On the other hand, in the question of whether this could be a start, we answer that the individuals are a little out of this movement with the decline of the HODL amount of BTC to the lowest in 5 months. We may encounter new purchases of individual investors for fear of missing the opportunity we call FOMO.

Technically, when we consider BTC / USD; In addition to seeing a record level, it should close for the first 16 hours above $ 19,500, and then watch this area as per the two-day rule. However, momentum is still preserved. Therefore, it is necessary to follow the support points below in withdrawals. the outlook is positive and in the direction of an uptrend. 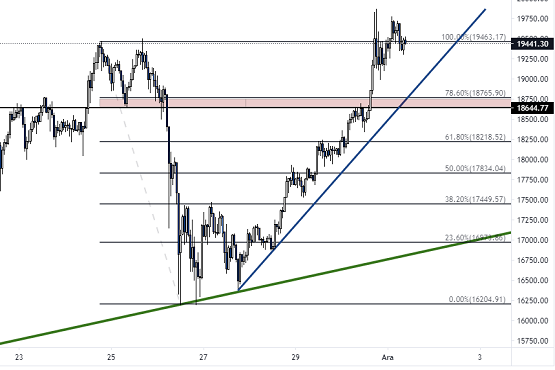 Ethereum Analysis - The new technology from Ethereum Proof of Work to Proof of Stake is counting down the hours for the first phase of 2.0. This model, which was presented as a solution to eliminate problems such as the Proof of Stake mechanism, ie "Proof of Stock" energy consumption and costs, made radical changes in the mining system. In addition, the fact that Ethereum will also switch to the PoS system with the 2.0 update has greatly increased the interest and confidence in this new consensus mechanism.

Although the ETH / USD transition, priced at $ 610 this morning, raised the question of whether there would be a profit realization, this withdrawal in ETH / USD, which fell below the $ 500 level the previous day, created buying pressure across the market and its return was rapid. Now, although the $ 610-622 zone is a resistance, there is no significant resistance after the break of this zone. In the withdrawals, the middle band of the channel passes through the $ 540 zone. Due to the importance of the day on Ethereum basis, it is necessary to be careful against fluctuations. The outlook is on an uptrend but for now, prices are calm. 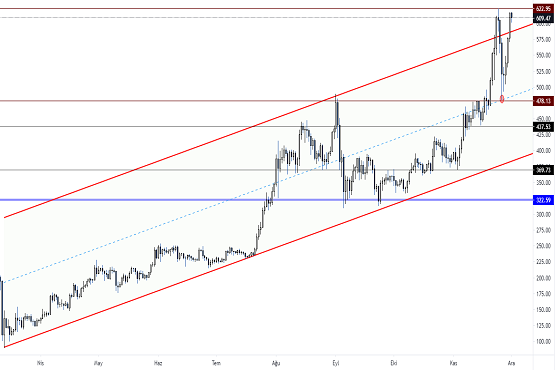 AVAX, which rose to $ 3.80 as a result of the upward rally in cryptocurrencies, has been trading near $ 3.75 with a 3% change since yesterday. The expected launch of Ethereum 2.0 will take place today. In AVAX, which previously had a Proof of Stake system, trend-oriented movements can continue with the increase in demand for Proof of Stake technology. With the update of AVAX, which will take effect next month, a bridge will be established between the Avalanche platform and the Ethereum platform. Thus, ERC20 tokens will be able to interact with Avalanche. In this case, we think that the transitivity may increase as well as increase the user pass-through from ERC20 to Avalanche.

When we consider AVAX / USD technically; The uptrend continues and it is seen that there is buy reaction in the withdrawals. AVAX, which draws an uptrend in both directions, has support at 3.57 in pullbacks, but the second trend in possible sags is above 3.40. In AVAX / USD where upward movements continue, the trend maintains its upward slope, although the movements are slow. 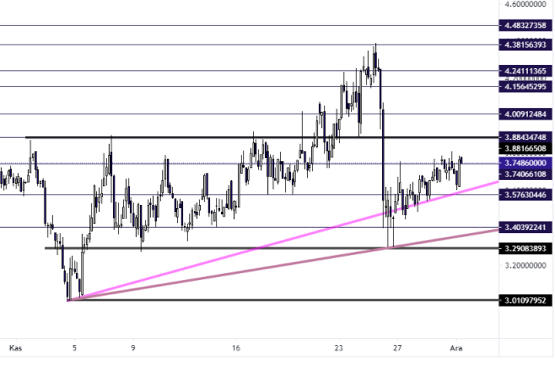 Ripple Analysis - Ripple rebounded slightly yesterday as it hovered around $ 0.6250 levels, led by Bitcoin, rising to around $ 0.6500. XRP, the third largest cryptocurrency by total market capitalization, has literally begun to climb up just like the rise of Bitcoin (BTC). Ripple manager Asheesh Birla mentioned that it could offer a more efficient and global payment system for XRP. He stated that he destroyed the perception that "there is only Bitcoin in the sector" for Ripple, which showed great interest especially in corporate companies. He announced that they will work in the field of e-commerce as well as payment systems.

XRP / USD was traced as high as $ 0.6890, breaking the key resistance level of $ 0.6470 yesterday. XRP is trading at $ 0.6490, creating a trading band between $ 0.65 and $ 0.79. Good follow-up of the support resistances in volatility can shorten the distance that can be done in a long time on the basis of the process. Prices have not been digested yet and we can say that volatility is high. 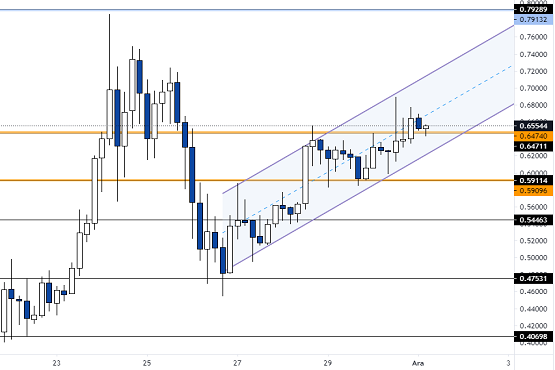 The uptrend in Litecoin's transactions yesterday created buying pressure on investors. With over 10% change coming this morning, it approached $ 89 levels. According to Glassnode data; The Realized Price Ratio reached its highest level in the last six months at $ 68.85. We see that the short-term market sentiment has disappeared. It provides a positive indicator in terms of the longer term volatility of Litecoin's value.

In LTC / USD, it was able to continue its rise to the 90.20's by breaking the $ 85 level, which was the critical resistance, yesterday evening with a strong buy. With the profit realizations at these levels, short-term sales were seen in the morning hours. As a result of the price fluctuations since March, a double bottom has been observed and its effect is still continuing and its target is above $ 105. The $ 85 and $ 78 levels could be considered in possible withdrawals. In Litecoin, where volatility has increased, we can say that it is possible to move between $ 90 and $ 95 during the day. 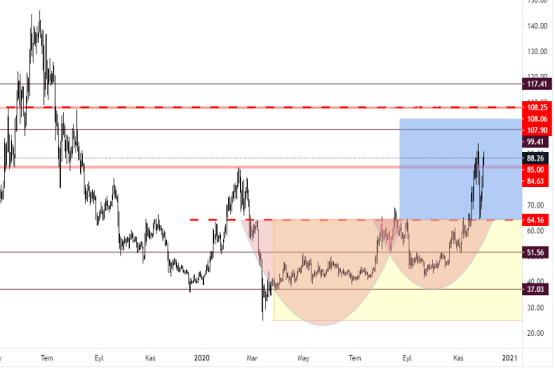 LINK Analysis - LINK trades $ 14, up 3% this morning, based on yesterday's transactions. According to Glassnode; Chainlink's percentage of supply in smart contracts is duplicated at an all-time high. In other words, with the Ethereum 2.0 update, updates will be made in smart contracts and agreements with corporate companies will be cleared. For this reason, today's Ethereum 2.0 launch is eagerly awaited in LINK using the Ethereum network.

LINK has continued its bullish channel crossings since late September, and saw an increase of around 18% since Thursday as buying pressure increased over the past week. Today, it is on a horizontal course with the profit realizations and is moving at $ 14.20 levels. The minor outlook still remains positive. With the continuation of volatility movements of the day, the levels that can be followed could be in the range of $ 14.05-$ 14.80. 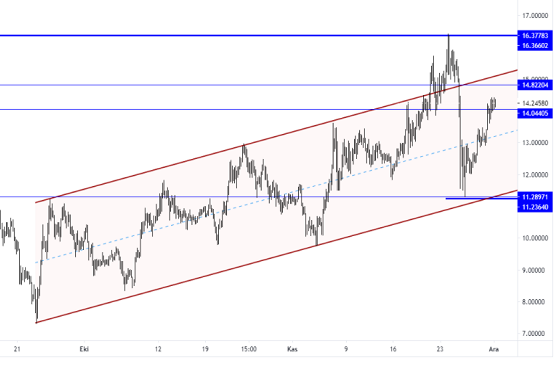 BAT / USD has been traded close to $ 0.2600, gaining 10% more value from yesterday as a result of the breaking of 0.2395 with its volume purchase and strong momentum. Although it is possible to see some retractions in the crypto money markets with the profit realizations seen in the morning hours, BAT / USD is still priced near the $ 0.2600 level. If the minor upward trend is not disrupted, it seems that movements between 0.2490 and 0.2700 $ may be possible with the continuation of volatile movements during the day. 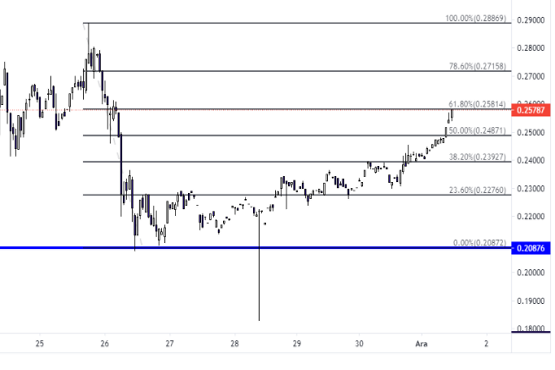