Could the EU Use Stellar Blockchain to Issue Its CBDC?

On a platform where Stellar users are active, the issue of CBDC, which has been on the agenda before, was discussed again. According to the latest statements of the President of the European Union, the possibility of creating the digital euro on the Stellar network is among the possibilities that Stellar users prioritize.


Starbucks Will Accept Bitcoin as Payment
Starbucks customers are now able to buy coffee with BTC thanks to an application that converts Bitcoin to USD dollars. Bakkt application with which Starbucks has announced partnership, will allow customers to deposit BTC to their Starbucks cards.

Ripple Is Hopeful about SEC Chair Nominee
In a recent Bloomberg interview Ripple CEO Brad Garlinghouse has stated that they hope to sit at the table with a new SEC administration of which Gary Gensler is the Chairman, for a new start.

Bitcoin is trading behind the $58,000 level at the beginning of the week. We will examine this aspect in the technical section. Although the price weakening and miners' transition to Bitcoin accumulation seems positive, we see that some chain data have not yet started the bull in Bitcoin. The most important of these, Entity Adjusted Dormancy Flow, has not yet crossed the bear-bull threshold. Its resistance was tested, but it returned as it did in early January. However, we also see accumulation in wallets holding Bitcoin. For this reason, rather than waiting for the decline in January-February, the increasing corporate news and the decrease in Bitcoin seen at the beginning of the year due to the accumulation in miner pools may remain a short correction, and technical analysis comes into play here as well.

When the BTC/USD parity is technically analyzed, while the movement continues within the bullish channel, the middle band of the channel was tested at $60,300, but could not be passed. However, while the $54,000 zone is supporting the major in pullbacks, the rising triangle formation in this zone also draws attention. However, confirmation is essential for formations. For this reason, we are watching the support-resistance lateral movements for now, as there will be no confirmation before the $60,150 high resistance, which is the resistance, is broken for the last two days. 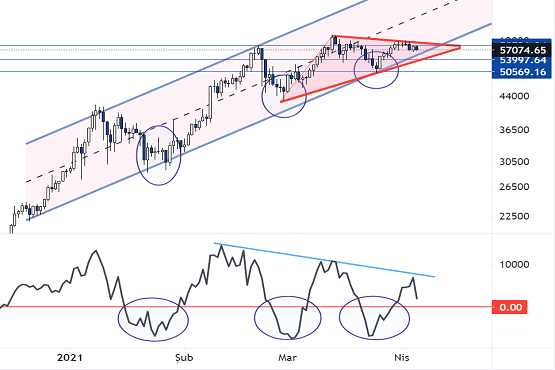 Ethereum retreated to $2,015 this morning after recovering its record at $2,145 on Friday. As we mentioned in our Crypto Zoom publications last week, Ethereum would price the discount with BTC despite the high transaction fees and the record would be set up to the upper band of the channel, $2,150. As a matter of fact, in our scenario, in order for ETH to break the record again, transaction fees should decrease and the network should relax. After the expected Berlin hardfork on April 14, ETH movements can be relieved. In addition, considering the BTC-ETH dominance, the ETH dominance, which declined to 56.2% but increased from 11% to 12.3%, also looks positive for the altcoin season.

When the ETH/USD parity is technically analyzed, the double peak after the record $2,145 could bring profit sales for Ethereum. Therefore, the double top view that could start with a break of the $1,990 level could suppress Ethereum up to $1,875. In order for this scenario to be realized, $1,990 should be broken and for now we are watching the pressure of the trend in this direction. $2,010 and $1,990 are significant supports, and the movements may get harder when they break. 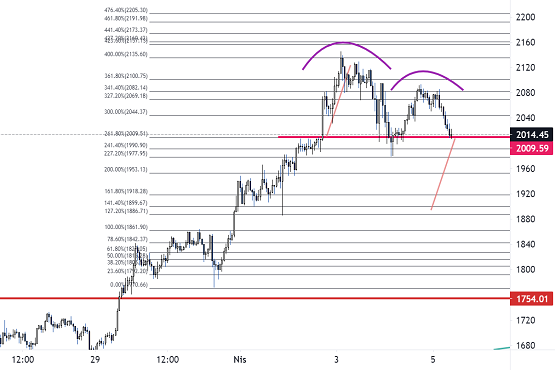 AVAX is trading at $29.70 this morning, up 1.7%. With the Apricot upgrade on March 31, the gas charges on the C-Chain in AVAX were reduced from 470 nAVAX to 225 nAVAX, and then it was aimed to strengthen the role of AVAX in the DeFi sector with over $50 billion in locked assets. AVAX, which increased by more than 10% as of March 31; continues to grow its ecosystem with Dapps, stablecoins, NFTs and wallets built on it.

Technically speaking, the AVAX/USD parity managed to close above the $28.00 level in the Fibo'23.60 correction after testing $26.20 in the overall profit realization on March 31. The reaction from this level carried the parity to the $32.70 zone during the weekend we left behind, but then it was pressured under the $32.40 resistance. Preparing for a new reaction, the first resistance will be $32.40 again, and in the short term, closings above this resistance level may bring the $36.00 Fibo'50 level to the agenda again. For now, the trend will be positive and profit sales above the resistance levels will be watched. Oscillators are positive on the uptrend. 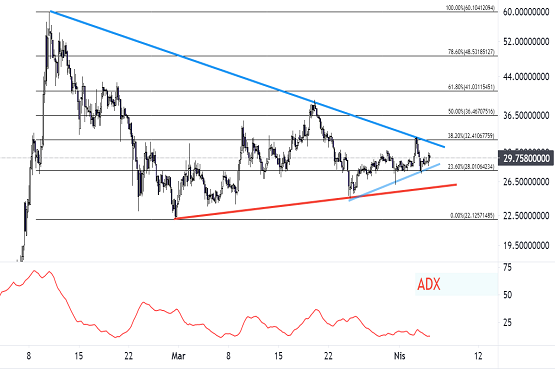 Ripple is up 17% in the 24-hour period this morning, differentiating positively from Bitcoin and Ethereum majors. With an instant price of $0.69, XRP reached $0.72 during the day, testing the highest level in the past two months. The developments regarding the Ripple case have been predominantly in favor of Ripple for the past week. According to Garlinghouse's latest statements, positive statements such as changing the center of Ripple or even changing XRP to create an alternative have been the trigger for XRP, which has not kept up with the rise in the market for a while and lagged behind in the bull run. On April 6 (tomorrow), a new preliminary hearing will be held on the SEC case, and this upward momentum before the hearing can be guiding in the main part, according to the statements of the parties. For this reason, volatility and drastic changes for the parity should be considered for investors.

When the XRP/USD parity is technically analyzed, the parity's reaction to the uptrend and its reaction on it made it support the $0.56 resistance level on April 1. At the same time, this level, which is Fibo'78.60 slices, is the reaction support brought about by the current triangular compression. We have stated for the last week that the upward breakage of the triangular zone can bring along an accelerated rise. The 17% increase on a daily basis indicates that the tightening target has been completed for now. $0.64 is in the initial support position in pullbacks. Oscillators have reached saturation on a daily basis, but the course is positive in the medium term. 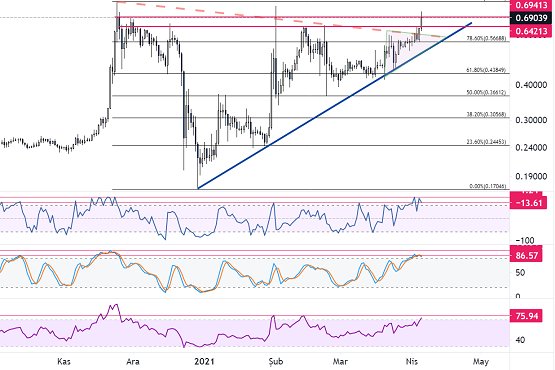 Litecoin is in the $200 price zone with a 1% retracement this morning. The $246 level, which arrived on February 20, was nearly the highest in 3 years for the parity. Litecoin, which ranks 3rd according to its market value in 2020, is now 9th with a market value of $13.5 billion. Therefore, although we are keeping our price target of $270 in the medium term, the parity has not yet been able to break the downtrend that was initiated after $246. However, according to Glassnode data, LTC's average transaction volume reached 172.6 LTC, the highest level in the last month. On the other hand, the actual market value metric also indicates that LTC prices are discounted. For this reason, voluminous spikes can be supported when Litecoin reaches a local peak that will reduce selling pressures on it. Progress is slow for now.

When the LTC/USD parity is technically analyzed, the minor uptrend that was initiated on March 25, after pressure from the $215 level, dropped the parity to the $192 support. The breakdown point of the downtrend in the parity, where falling peaks and rising lows create a squeezing appearance, should be followed. Closings on this zone may create positive movements, but for now, the $204 resistance in the Fibo'23.60 zone will become the new support position, which will be the first target for the parity in the short term. 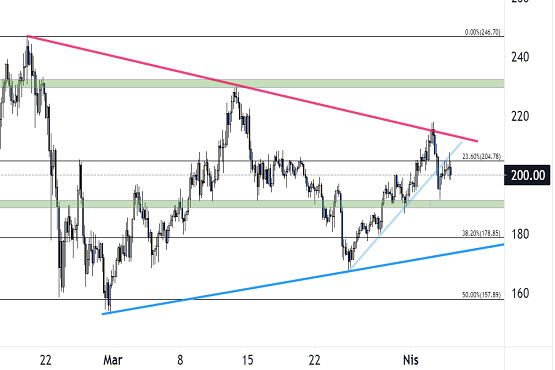 Chainlink has included the Polkadot oracle service in its multi-chain environment after completing its integration with Polkadot. Thus, Chainlink will allow smart contract applications in the Polkadot ecosystem to access accurate, up-to-date and tamper-proof price reference data to power new products and markets. High quality data and efficient costs will be revealed for both sides.

When the LINK/USD parity is technically analyzed, the parity continues its persistence on the minor uptrend it is on as of March 24. Traded at $29.90, LINK's closest support level is $29.20, which is again above the trend. For this reason, the support point for LINK to activate purchases can be around $29.20. Histograms that increase in the sales direction in the MACD on the 4-hour chart confirm possible withdrawals. The reaction that can be given at around $29.20 on the trend can help LINK to get rid of selling pressures by breaking the horizontal band it has been in for more than a month, if it brings candle closures above $32.00. 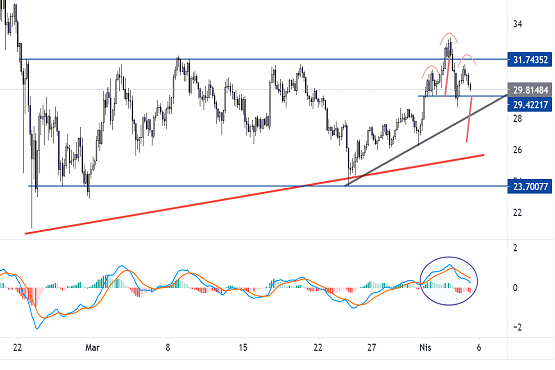 Basic Attention Token is retreating by 2.2% this morning, above the $1.15 level. The parity beat its downtrend, which it started after its $1.41 peak on March 17, with an upward break of $1.15 on April 2. The parity may be trying to create a backlash zone that is supporting its trend for now. We see that BAT remained a little slower despite the Grayscale purchases among the altcoins that were mobilized under the leadership of Ethereum. With closings above $1.20 and buying volume stabilizing positively, the parity could test the triangle target around $1.48. In the short term, $1.12 is the trend support and $1.20 is the first resistance. Although the outlook on BAT has been horizontal for some time, the opening of the door for institutional investment, active wallets and increasing transaction volume constitute strong underlying supports for pricing. For this reason, it is important for price stability not to experience sharp declines during the consolidation period. 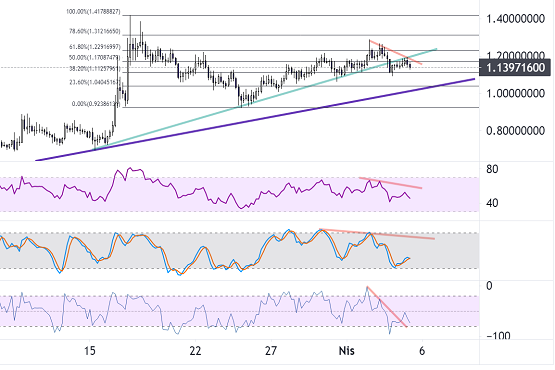