According to Bloomberg news, the US Tether investigation was investigating whether the executives behind the digital token engaged in bank fraud, a potential criminal case that could have broad implications for the cryptocurrency market, but in the response from the Tether firm, it was said that these allegations were an effort to discredit Tether by repackaging it. .

Blockchain Australia presented its recommendations to regulators to adopt an appropriate regulatory framework that enables innovation and competition while improving consumer outcomes.

Proposal Made in South Korea to Seize Wallets of Tax Evaders

Goldman Sachs; Nokia has filed for a “DeFi” ETF that will track major stocks including Google and Fujitsu.

Bitcoin, which is horizontal in the morning hours, is priced at $ 37,037. When the rapidly rising Bitcoin reached the level of 40 thousand dollars with the claims that Amazon will accept Bitcoin as a payment method the other day, Amazon denied these claims. With this news, there was a decrease in value of about 5 percent on the Bitcoin side. When we examine the chain data on the Bitcoin side, there is a 41% increase in new and balanced addresses in the 24-hour exchange. In addition, there are $205 million worth of BTC outflows from exchanges to wallets on a daily basis. Although we interpret this chain data positively, it is possible to say that we have seen a pullback on the BTC side with the effect of the news. When we consider the BTC/USDT parity technically, we see that it started the day above the weekly DEMA ($ 36,569) levels. In order for the price to continue its upward movement, it is very critical to break the Fibo'38.20 correction at $39,288, as well as break the resistance in the $40,500-40,700 band and sustain above these levels. As of the morning hours, the closest support level for BTC, which has withdrawn, is $ 36,569, and we expect $ 35,587 levels to act as support when this support is broken down. 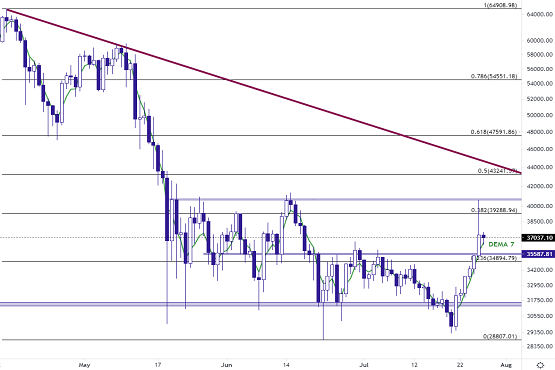 Ethereum, which depreciated by about 2 percent in the morning hours, is priced at $2185. Despite the sharp rises we saw in the market under the leadership of Bitcoin yesterday, ETH provided a return of approximately 11.5 percent during the day, but this rate was limited to 1.75 as of the daily closing. When we check the chain data for ETH, when we look at the 7-day average of the net flow between exchanges and wallets, we see that ETH outflow from exchanges continues. We think that investors see the price levels that ETH has been at for the last few weeks as suitable for long-term investment.

When we look at the ETH/USDT parity technically in the daily period, although it rose to $ 2433 levels yesterday, it could not remain above the $ 2331 level, which is the Fibo'23.60 slice. With the opening of the daily candle today, ETH is seen as holding above this level, which retested the 50-day moving average ($ 2149), which it broke up in the past days. ETH, which tested the descending trend in Momentum as of July 2, received a reaction, but the buy signal in the MACD continues in the daily period. As long as there is no daily close below the 50-day moving average, we think that the rises will continue for ETH. 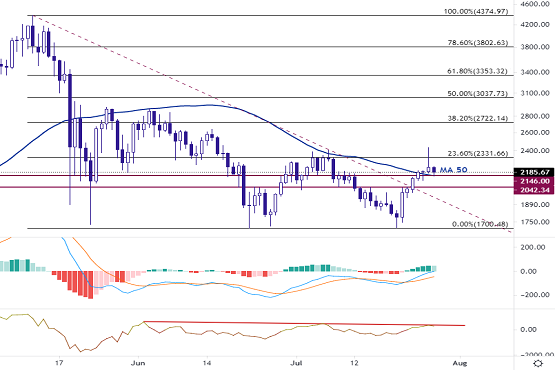 AVAX, which depreciated by 1.5 percent in the morning hours, is priced at $11.28. When we consider the AVAX/USD parity technically in the 1-hour period, we see that the price movement continues within the ascending channel as of July 20. AVAX, which tried to break the upper band of the channel with the sharp rises yesterday, could not sustain above this level and fell to the levels of $11.15, which coincides with the lower band of the channel, with the pullback experienced throughout the market. In AVAX, which is seen as having found support from the lower band of the channel in the morning, the MACD sell signal continues, but there is a decrease in the downward movement momentum. Unless there is a 4-hour close under the channel lower band, it is expected to see rises towards the 12 $ levels where the channel middle band is located. 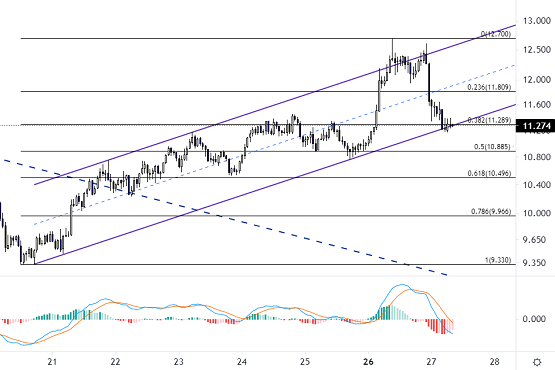 Ripple, which followed a horizontal course in the morning, is priced at $0.622. In the past weeks, there have been disagreements over the testimony of former SEC employee Hinman in the Ripple and SEC case, and Judge Netburn ordered that the statement be taken, despite the SEC's efforts to not take the former employee's statement. According to the decision taken, Hinman, the former corporate finance director, will be questioned on July 27 (today). Ripple aims to use this phrase to its advantage.

When we consider the XRP/USDT parity technically, we see that it has broken the descending channel that has been continuing since June 29 in the 4-hour period, but tests the bottom of the upper band of the channel at night. In case of continuation of the downward movement, with the closest resistance level at $ 0.641, we expect the $ 0.615 levels, which coincides with the middle zone of the Fibonacci correction as well as the rising trend formed since July 21, to act as the closest support level. If there is a downside break from this support, selling towards the $0.601 levels could deepen. When we examine the MACD, it has created a sell signal in the 4-hour period. In the short term, buying near support and selling near resistance will be a healthier strategy. 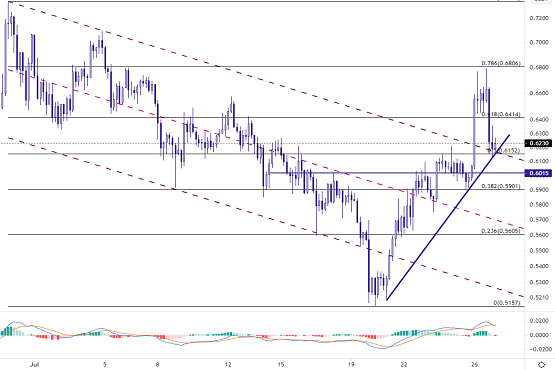 Litecoin, which lost 2% in the morning hours, is priced at $128. When we analyze the chain data for Litecoin, we see that although there is an increase in the number of new addresses on a daily basis, when we analyze the same data on an average of 7 days, it still tends to decrease. Although there is no positive data for Litecoin in the short term, we predict that Litecoin will accompany this rise in the rises that may be experienced under the leadership of Bitcoin.

When we consider the LTC/USDT parity technically, these levels can be considered as support levels for LTC, which started the day above the $128.47 level, which corresponds to the weekly DEMA level. If this support is broken down, we can expect $123 (DEMA 14) levels to act as support. The closest resistance zone to watch for possible upward moves is the $140-143 levels. Buying near short-term support and selling near resistance will be a healthier strategy. 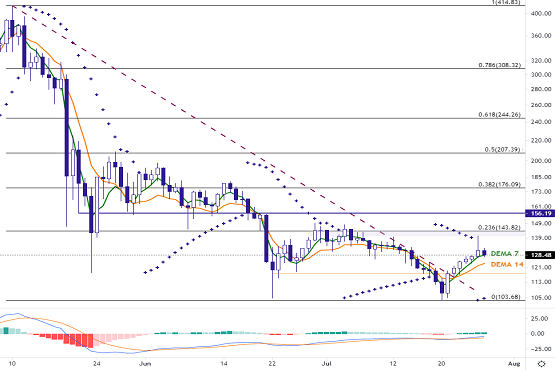 LINK, which gained 1% value in the morning hours, is priced at $ 18.16. LINK, which rose up to $20.00 yesterday, could not sustain at these levels. When we analyze the chain data of LINK, we see that the number of active and new addresses increased yesterday. This situation supports the rise experienced yesterday, and we interpret the increase in the number of active and new addresses as positive.

When we look at the LINK/USDT parity technically, we can say that it exceeded the Bollinger upper band in the 4-hour period yesterday evening and tried to break the resistance at $ 19.93, but received a reaction from these levels. Testing below the Fibo'78.60 retracement level, $17.96 is the closest support level for LINK, which corresponds to this correction level, and if the support is lost, a pullback towards the $17.49 levels, which corresponds to the Bolliger middle band, is possible. In line with the continuation of the upward move, we expect the $19.62 levels, which coincide with the Bollinger upper band, to act as the closest resistance levels. 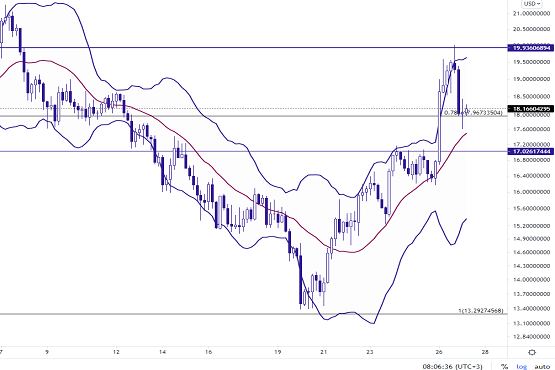 BAT, which has a horizontal price movement in the morning hours, is priced at $0.5464. When we consider the BAT/USDT parity technically in the 4-hour period, BAT, which broke the descending channel that existed as of May 27 yesterday, started to price above the resistance level of $ 0.5675. Unable to sustain above this $0.5675 level as of the close of the day, BAT retested the channel upper band at $0.54. The sell signal from the stochastic in the 4-hour period maintains its continuity in the morning. BAT, which is currently clinging to the upper band of the channel, is expected to increase intraday towards $0.57 unless it closes in 4 hours below. 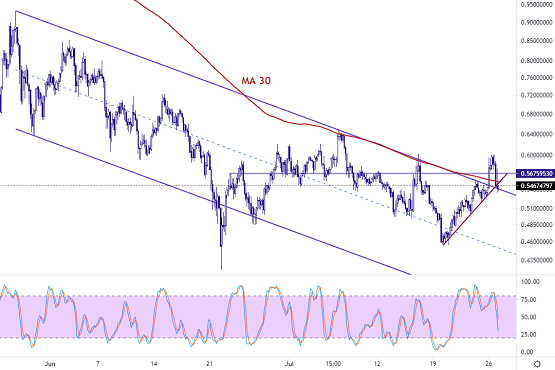