In the Monetary Policy report released by the Fed on Friday, July 9, it was stated that crypto assets were included for the first time, while the price increase of crypto assets was an indicator of the increase in risk appetite.

While Mechanicville, the historical power plant in New York, started Bitcoin mining with some of the power it produces, the owner of the plant stated that BTC mining is more profitable than selling the excess energy.

In the report prepared by the Bank for International Settlements (BIS), the International Monetary Fund (IMF) and the World Bank for G20 countries, it was stated that digital central bank currencies can make international payments cheaper and faster.

The State Council of China, in its recommendations on how to develop models used in foreign trade transactions, announced that the work in the field of Blockchain should be “accelerated”.

Survey Results for CBDC from the National Bank of Ukraine

The results of the survey conducted by the National Bank of Ukraine revealed that representatives of the financial sector wanted a central bank digital currency to be issued and preferred it to be a blockchain-based currency.

Warning From ECOWAS About Using Cryptocurrency

Christine Lagarde, President of the European Central Bank (ECB), said that there are at least 80 central banks around the world that are interested in digital currencies, and that it is their duty to have digital currencies that will work for the benefit of consumers.

Bitcoin, which moves in a horizontal course in the morning, is priced at $ 34,256. When we examine the chain data, there is a net worth of $541 million worth of Bitcoin and $330 million worth of Tether outflows from exchanges on a weekly basis. Although we interpret the Bitcoin exit as positive, a net entry to the stock exchanges instead of a net exit on the Tether side would be a more suitable scenario for the rise. However, on the other hand, we see that the aSOPR data exceeded 1 on July 11, that is, the average Bitcoins were sold with a profit yesterday. At this point, although the continuity of the exit on the Bitcoin side and the fact that the aSOPR data is above 1 support the rise, the breaking of the horizontal channel at the levels of $ 30,000-41,000 will be critical to talk about a permanent direction for Bitcoin.

When we consider the BTC/USDT parity technically, we see that it opens daily on the weekly DEMA and is priced at $ 34,256 in the morning. RSI found support at 42 levels and is currently in an uptrend. If the price continues to move upwards, we expect the $34,838 levels, which coincide with the Fibo'23.60 retracement level, to act as the closest resistance level. On retracements, the closest support level will be $33,979, which coincides with the weekly DEMA. For BTC, which has been following a horizontal course in the $30,000-41,000 band for a long time, buying near support and selling near resistance will be a healthier strategy in the short term. 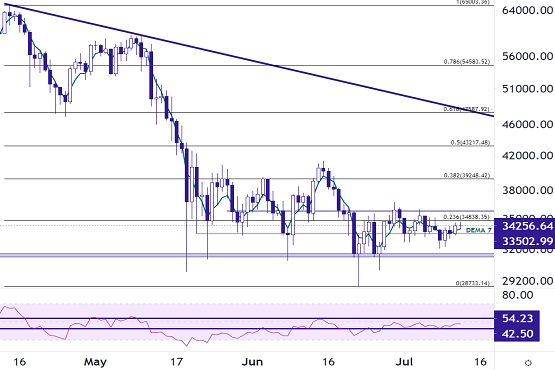 Ethereum, which is dominated by sideways price action in the morning, is priced at $ 2143. When we look at the chain data on a daily basis, approximately 1.9 billion dollars of ETH has been transferred from exchanges to wallets in the last week. While the amount of ETH locked in smart contracts last week accounted for about 24% of the total supply, this amount has now reached the level of about 32%. Considering this increase in a short time, as well as the outflow in the stock markets in the weekly chain data, we think that there has been a significant decrease in the selling pressure for ETH and that ETH will be positively affected by future developments/updates.

Technically speaking, the ETH/USDT pair is priced below the monthly moving average ($2173.38). When we examine it in the daily period, we see that the stochastic continues its signal to sell from the overbought zone on July 7. If there is a daily close above the average in ETH, which has been reacting from the monthly moving average for the last 4 days, an upward movement towards the $ 2329.79 level, which is the Fibo'23.60 slice, can be expected. If there is a close below the important support level of $ 2079 in the daily period, there may be a pullback towards 1980 dollars. Considering the chain data, the outlook for ETH is positive. 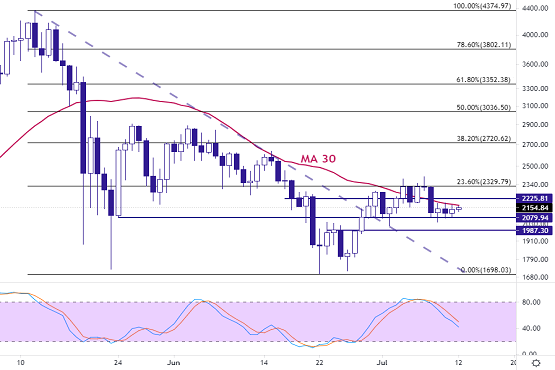 Rising about 2 percent in the morning hours, AVAX is priced at $12.65. When we consider the AVAX/USDT parity in a technical sense, the price movement continues within the ascending channel as of June 22. When analyzed in the 4-hour period, the stochastic continues the buy signal that came yesterday. 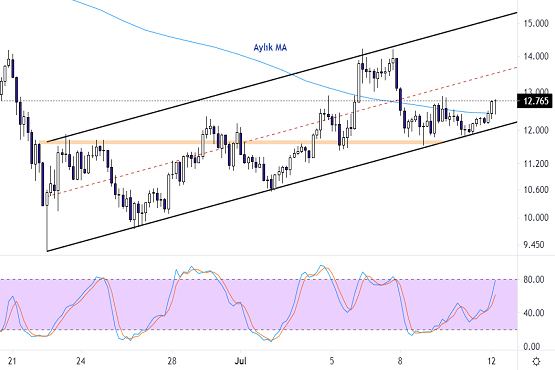 Ripple, which has risen by 1.30 percent in the morning hours, is priced at $ 0,653. While the letter written by the SEC lastly in the case was interpreted as inadequate by those who followed the subject, the expected decision of Judge Netburn on whether to take the testimony of the former SEC employee is awaited.

When we consider the XRP/USDT parity technically in the 4-hour period, we see that it has continued its movement within a descending channel since June 29 and has broken the channel middle band upwards at night. The closest resistance level is $0.66-0.67, which corresponds to the channel upper band, and if this resistance is broken, it is possible for the price to accelerate towards the $0.70 levels. The closest support level to follow in possible retracements is $0.647, and the loss of this support may cause a pullback to $0.63, which corresponds to the channel middle band. In the short term, pullbacks to support levels can be followed for new purchases or an upside break of the descending channel can be expected. 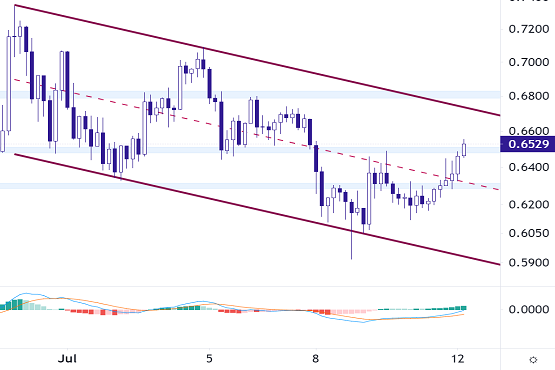 Litecoin, which gained 1.4 percent in the morning hours, is priced at $137. The MVRV- Score, which dropped to -0.4 levels in the past days, was pointing to a discount for Litecoin. When we examine the chain data, it shows that as of yesterday, the value is still below 0, at the level of -0.12, that is, there is a discount for Litecoin in the long run.

When we look at the LTC/USDT parity technically in the 4-hour period, we see that it broke the downward trend that has been going on since July 4 upwards at night, and it remains at these levels as of the morning hours. If the bullish trend continues with $135 levels as support, the nearest resistance level will be the $139-140 band. For new purchases, pullbacks or an upside break of the $140 resistance and persistence at these levels can be expected. MACD maintains its upside signal. 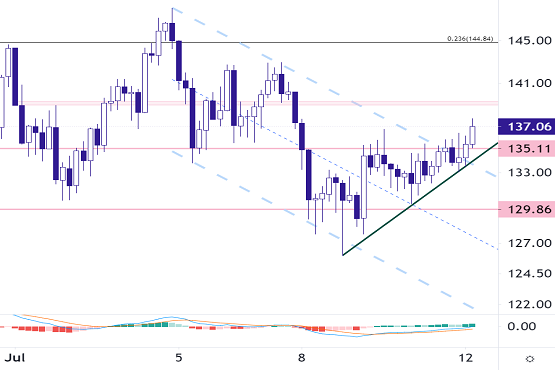 Rising 1 percent in the morning hours, LINK is priced at $18.46. When we analyze the chain data for LINK, we see that the number of active and new addresses has decreased in recent days. While we are telling us about the decreasing interest of these investors, we predict that the interest in altcoins will increase in a possible rise in the market led by Bitcoin.

When we consider the LINK/USDT parity technically, it has been acting on an ascending trend since June 22. In case of continuation of the upward move, the closest resistance level is the Fibo'23.60 retracement level, which corresponds to the $19.69 levels, and we expect the $17.95-17.99 band, which coincides with the uptrend, to act as the closest support level in case of possible pullbacks. RSI is trending upwards while finding support at 41 levels. Since there are various uncertainties about the direction in the short term, it may be more appropriate to trade with support and resistance. 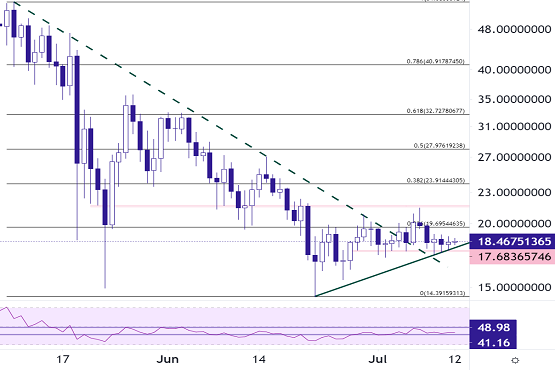 BAT, which moves sideways in the morning hours, is priced at $0.57. When we look at the BAT/USDT parity technically, we see that it opened daily above the weekly DEMA ($ 0.564) levels and broke the downward trend that has been continuing since July 7 at the weekend and provided permanence on it. In the short term, buying from the weekly DEMA levels, which is the closest support level, and selling near the resistance at $0.58 may be a healthier strategy. MACD and Parabolic SAR hold the buy signal for BAT. 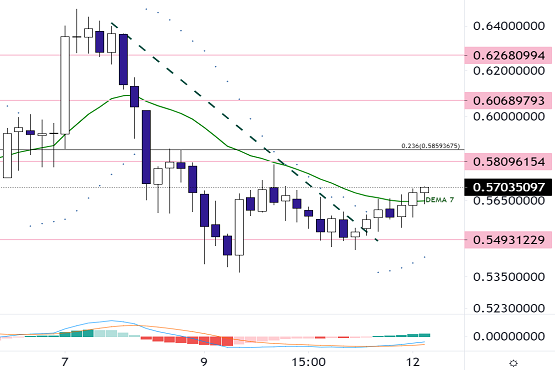