In Vietnam, the country's prime minister asked the central bank to work on Cryptocurrencies and a blockchain-based central bank currency and pilot it within two years.

The Philippine Stock Exchange (PSE), the national stock exchange of the Philippines, wants to provide cryptocurrency trading when regulators give it the green light.

Authorities in the USA Sell Bitcoins Seized in the Case

Federal officials in the US state of Ohio announced that they sold 500 Bitcoin seized in 2018 in a fraud case for $ 19.2 million.

Statement from the CEO of iMining About the Chinese Edition

The iMining CEO thinks the diversified location of Bitcoin mining facilities after the crackdown in China is great news for the rest of the world.

A senior government official in Japan, which has started CBDC studies in the past months, said that they will have a clearer idea of ​​the digital yen by the end of 2022.

Russian Ransomware Hackers Demand $70M in BTC From US Firms

The Russian-based ransomware hacking group hacked into the networks of at least 200 US firms last Friday, seeking $70 million in BTC in exchange for decryptors.

Switzerland-based bank UBS said that Bitcoin is not suitable for professional investors, while drawing attention to growing concerns after mining pressure in China.

BTC Move from a Local E-Bank in Ukraine

As the Ukrainian government moves forward with cryptocurrency-related legislation, a major local e-bank is preparing to launch a debit card that includes Bitcoin trading.

The Dubai-based investment firm has more than 1,500 employees in 40 major Chinese cities. However, cryptocurrency restrictions have turned the company into many countries where mining is more accessible.

Brazil's Bitcoin Banco Group and its leader have been arrested for allegedly embezzling $300 million in cryptocurrencies.

The Bank of France said it conducted its fifth experiment with a central bank digital currency (CBDC) in March with a number of investment banks such as BNP Paribas and the Euroclear clearinghouse.

Bitcoin, which gained 3.11 percent in the morning hours, is priced at $ 34,744. When we examine the chain data of Bitcoin, we interpret positively that 34.7 million worth of Bitcoin exits from the stock markets despite the withdrawal experienced yesterday. In addition, in the weekly report published by CoinShares, a total of 62.5 million dollars of fund inflow after one month and the fact that Bitcoin has the biggest share in the cake with 38 million dollars shows that the interest of the institutions has increased again.

Technically speaking, BTC/USDT parity, although it tested below the support at $ 33,500 during the day yesterday, Bitcoin Fibo'23.60 correction level ($ 34,838), which broke the downward trend that has been continuing since May 10 in the morning, immediately. priced below. If we can break the $34,838 resistance to the upside and then hold above these levels in the 4-hour period, we may see a price move towards the $35,600-35,800 band. We anticipate that the $33,500-33,600 levels will act as support in case of negative news or an increase in volume in the direction of selling. MACD maintains its upside signal. In the short term, buying near support and selling near resistance will be a healthier strategy. 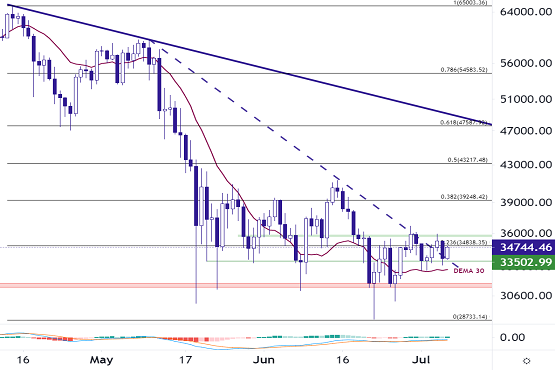 Ethereum, which has risen by 5.82 percent in the morning hours, is priced at $ 2324. In the CoinShares weekly report, the entry of approximately $ 17 million on the Ethereum side and the renewed interest of the institutional investor in Ethereum, and in addition, when we analyze the chain data of Ethereum, we interpret the slight recovery in the number of active and new addresses as of yesterday, positively. Considering the London hard fork that will take place this month, we maintain our positive view for the medium and long term for Ethereum.

When we look at the ETH/USDT pair technically, we see that it started the day above the two-week DEMA ($2183) level and was priced above the weekly DEMA ($2286) levels as of the morning. We anticipate that these levels will act as an important resistance since the $2329 levels, which coincide with the Fibo'23.60 retracement level, have been tried before, but could not provide permanence. If this resistance at $2329 can be broken to the upside and persistence above these levels, we expect the price action to continue towards the $2500 levels. If the resistance cannot be broken, the $2225 levels will be the closest support level. The Parabolic SAR maintains its upside signal for ETH. 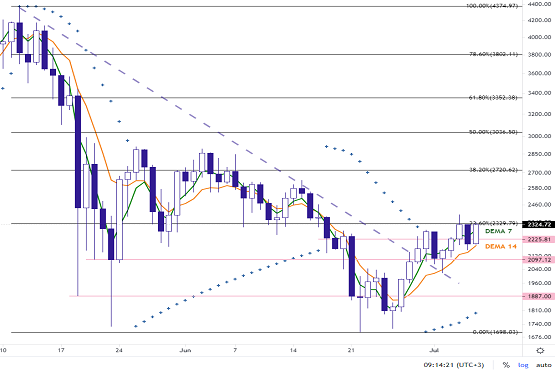 AVAX, which gained about 13 percent in the morning hours, is priced at $ 13.60. When we consider the AVAX/USDT parity technically, we see that it broke its monthly moving average upwards this morning. As we mentioned in the bulletin yesterday, AVAX, which found support in the $11.60-11.90 band, broke the critical resistance at $12.94, which is the Fibo'50.00 tranche. When we examine it in the 4-hour period, the rises will continue for AVAX if the persistence on this resistance, which is broken by the transaction volume that is above the average. The 4-hour stochastic has crossed to the upside, giving a buy signal. The next target for AVAX is the resistance level at $15.40. If it retests $12.94, we expect this level to act as support. 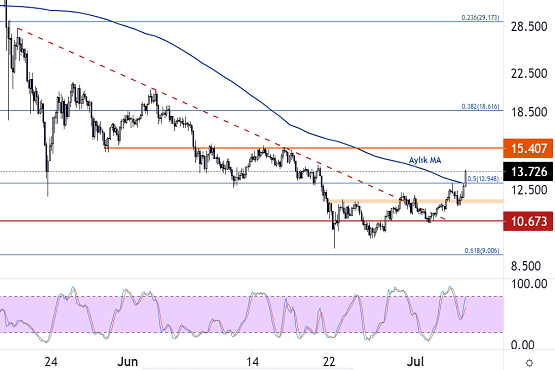 Ripple, which has risen by 3.45 percent in the morning hours, is priced at $ 0.6753. In these days when the positive and negative news flow on behalf of Ripple is quite weak, the SEC is expected to respond to the letter written by Ripple regarding the latest Ripple lawsuit on July 8. It is possible to say that we watched an upward price movement in the morning hours in Ripple with the positive trend in the market.

When we consider the XRP/USDT pair technically, we see that it has been in an upward trend since June 22 and is priced above the weekly DEMA ($ 0.669) levels as of the morning. Although it has tested the $0.70 levels before, these levels are critical for XRP, which cannot sustain at these levels, and if it can be broken to the upside, we expect the price to move towards the $0.75 levels. If there is a possible pullback in the market, we would expect the weekly DEMA level followed by the $0.646 levels to act as support. In the short term, buying near support and selling near resistance will be a healthier strategy. 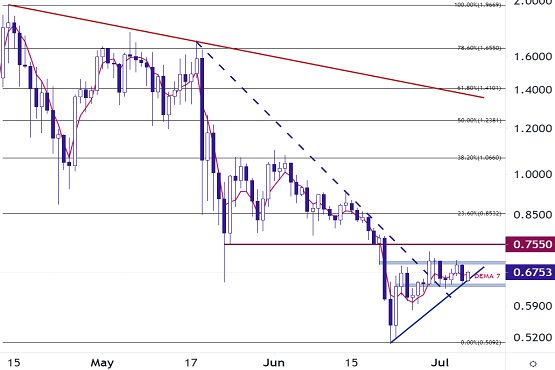 Litecoin, which rises by 3.22 percent in the morning hours, is priced at $142. When we analyze the chain data for Litecoin, the increase in the number of active and new addresses as of yesterday shows that investors' interest in Litecoin has increased.

When we look at the LTC/USDT pair technically, we see that it has been moving in an upward trend in the daily period since June 22 and tried to break the $144.84 levels, which coincides with the Fibo'23.60 correction level, but failed. Therefore, the $144.84 levels are a strong resistance and we would expect the price to move towards the $16 levels if the upside is broken and sustained in the 4-hour period. However, if the price moves to the downside, the two-week DEMA ($135.80) levels could be seen as the closest support level. A more appropriate strategy may be to wait for the resistance breakout for new purchases in LTC. 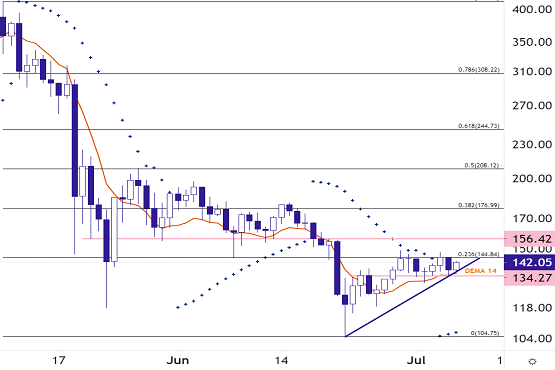 LINK, which rose by 6.66 percent in the morning hours, is priced at $19.56. When we look at the LINK/USDT pair technically, we see that it is holding above the two-week DEMA level and is priced just below the Fibo'23.60 retracement level ($19.69) as of the morning. The breakout of this level is very critical, as it has been tried before but has not been sustained, and if it can be sustained above $19.69, we expect the price to move towards $23.00. However, if this resistance is not broken, the weekly DEMA ($19.02) levels will be our closest support levels. For LINK, it will be healthier to make new purchases or to make short-term trades with a pullback towards support levels, as it maintains above $19.69 levels. 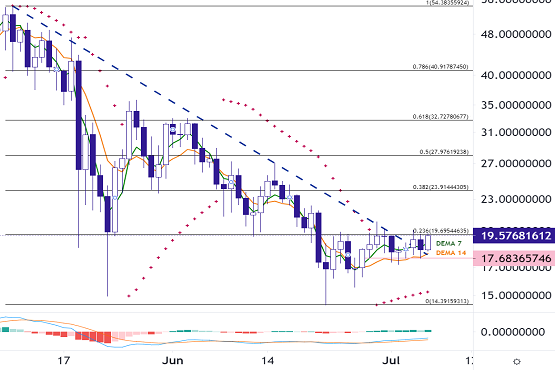 BAT, which gained about 4 percent in the morning hours, is priced at $0.59. When we look at the BAT/USDT parity technically, BAT, which has been experiencing pullbacks with the resistance it has seen from its 30-day moving average, broke the ascending minor trend downwards as of June 22. Testing the trend it broke again from below, BAT broke the $ 0.583 level, which is the Fibo'23.60 slice, with high volume on the upside. However, there is a short-term bullish movement area for BAT, which received a buy signal from the oversold zone in the 4-hour period. If the uptrend retest ($0.59) does not see any reaction, it will continue to rise. 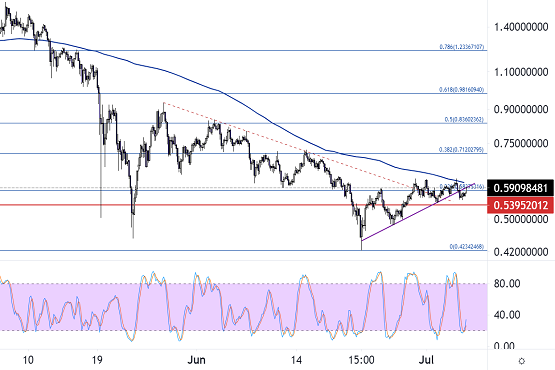