Cryptocurrency Warning from Deloitte to Banks

In the latest research of the independent audit company Deloitte, it was emphasized that banks that do not want to be left behind in digital transformation should take action on cryptocurrencies.

USDC Reserves Will Be Backed Only by Cash and US Bonds

According to the statement made by Emilie Choi, USDC reserves will be held only in cash and US bonds as of September.

From the last week of September, Iran will once again allow Bitcoin and crypto miners to operate in the country.

Online publishing platform Substack has announced that it has started accepting Bitcoin payments to its more than 500,000 subscribers.

A new one has been added to the new USDT production news followed during the bull market. Tether has minted $1 billion USDT to keep it in inventory.

Bitcoin, which is dominated by horizontal price movement in the morning hours, is priced at $ 45,538. According to the intraday news feed yesterday, online publishing platform Substack announced that it has started accepting Bitcoin payments to its more than 500,000 subscribers. At the same time, in this period where adaptation is increasing rapidly, the latest research of the independent audit company Deloitte emphasized that banks that do not want to be left behind in digital transformation should take action on cryptocurrencies. The outlook is positive for the overall market and Bitcoin.

When we consider the BTC/USDT parity technically, BTC, which continued its price movement within the rising channel that existed as of July 20, was priced above the middle band of this channel yesterday. BTC, which could not hold at these levels, experienced a slight pullback with the sell signal from the MACD in the 4-hour period. If the intraday channel middle band is not broken to the upside, a pullback towards the $48,000 levels, which coincides with the channel lower band, can be seen. 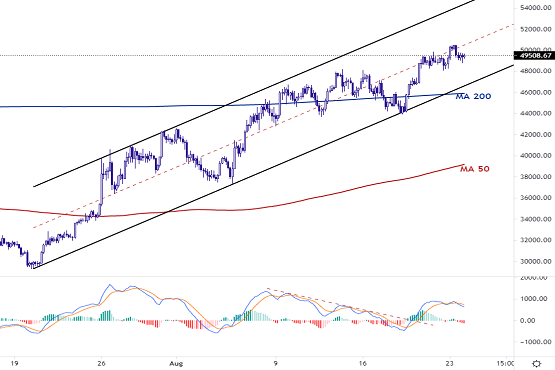 Ethereum, which gained about 0.5 percent in the morning hours, is priced at $ 3337.3. When we check the chain data for ETH, we see that there are significant increases in the 7-day average of the number of active and new addresses. We think that this trend will continue in ETH, which has recently attracted the attention of investors with the price action and the London hard fork. The outlook for ETH is positive.
When we consider the ETH/USDT parity in a technical sense, the sell signal continues in the MACD in ETH, which is still in the resistance zone in the $3285 - $3375 band. The bullish price for ETH can be sustained by the daily close above $3375. If there is an upside break in this currently suppressed price movement, the next price target is at the level of 3750 dollars. 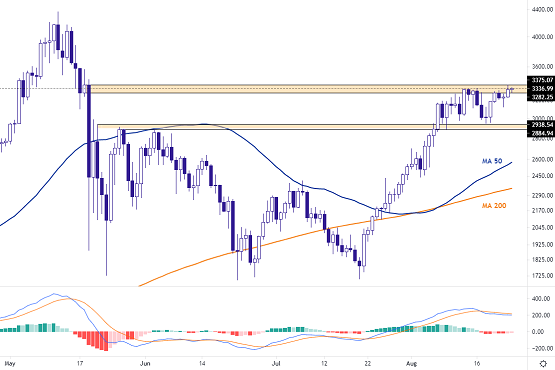 AVAX, which gained value by approximately 2.65 percent in the morning hours, is priced at $ 47.54. When we examine the AVAX/USDT parity technically, AVAX, which broke the important resistance level in the $ 34-37 band, rose to the next target level of $ 50. AVAX, which has received a reaction from the resistance zone in the $ 49-54 band for the last four days, is seen as losing its upward momentum in the short-term period. For AVAX, which we expect to see a reaction from this region, pullbacks towards $ 37 can be considered as a healthy correction movement. With the volume breaking up of the region, the rises towards new peak levels will continue. 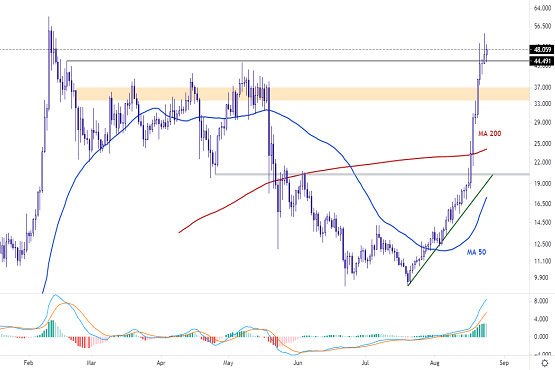 Ripple, which depreciated by about 0.97 percent in the morning hours, is priced at $1.2344. When we consider the XRP/USDT parity technically, XRP, which is priced above the major declining trend at the April 14 and May 18 peak levels, continued its upward movement with the support it found at the $1,065 levels, which corresponds to the Fibo'38.20 tranche. As we mentioned in the bulletin yesterday, as of August 15, the MACD for XRP, which has a triangular trough, maintains its buy signal. Even though the intraday triangle was broken upwards yesterday, in XRP, which started to price within the triangle as of the daily closing, if this triangle is broken up, the next short-term price target is the $1.41 level, which corresponds to the Fibo'61.80 slice. 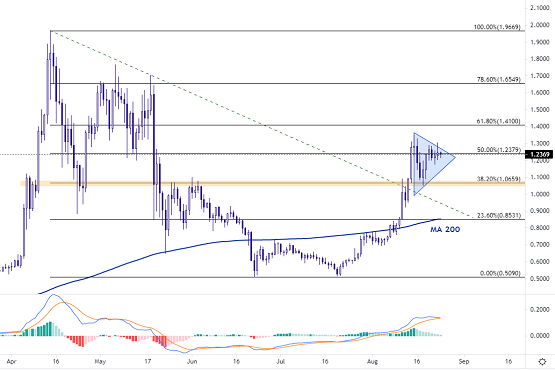 LTC, which lost about 0.4 percent in the morning hours, is priced at $186.22. When we look at the LTC/USDT parity in technical terms, although the rising trend that existed as of July 20 was broken down in the recent days, it started to be priced above with the rapid recovery. When we examined it in the 4-hour period, with the buy signal from the MACD, the sell signal came again in LTC, which accelerated the price movement in the bullish direction. If the critically important 200-day moving average ($194) is broken to the upside and persistence above it in the daily period, the next price targets are $204 and $230, respectively. 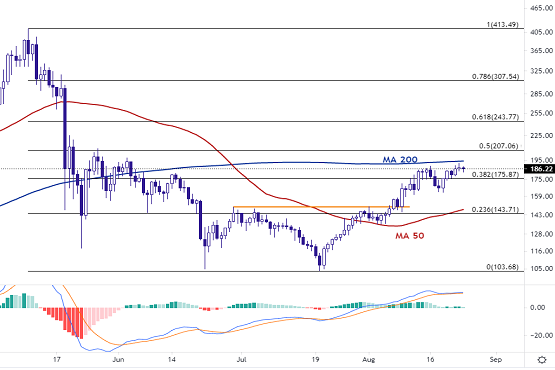 LINK, which gained about 0.50 percent in the morning hours, is priced at $ 28.71. When we examine the LINK/USDT parity technically, although it fell below the support of $ 26.67 last week, LINK, which started to price above this support with the rapid recovery, is also holding above its 200-day moving average. Although it started to give a stochastic sell signal in the 4-hour period, LINK, which tested its 200-day moving average with the beginning of the day, is seen as holding on to this level. As long as the 200-day moving average is sustained, the previous high of $30.5 will be surpassed and the rises may continue towards our next target price of $35. 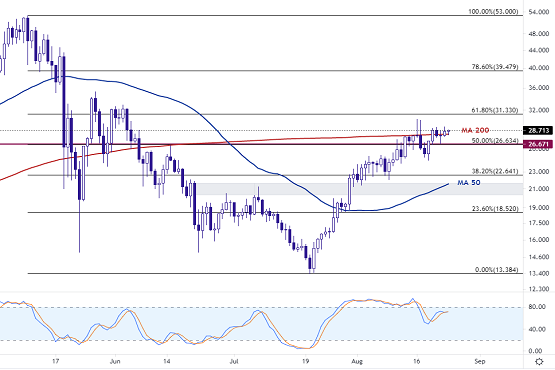 BAT 0.889, which depreciated by approximately 0.50 percent in the morning hours
priced at the dollar level. When we look at the BAT/USDT parity in a technical sense, when we examine BAT, which continues its price movement in the rising channel that existed as of July 20, in the 4-hour period, we see that there has been an upward momentum with the buy signal from the MACD in the past days and this signal is still preserved. The next price target for BAT, which had a positive outlook compared to the market overall yesterday, is the $0.96 level, which coincides with the channel upper band. Conservation of the lower channel band is important for the continuity of the rises. 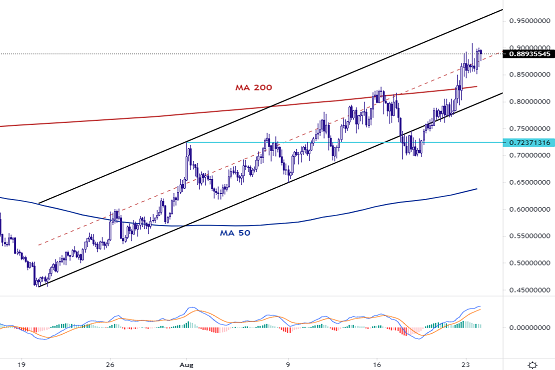